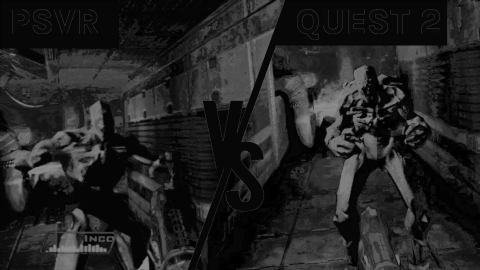 Today’s launch of Doom 3: VR Edition on PSVR isn’t actually the only way to experience id Software’s seminal horror shooter in VR. Ever since John Carmack showcased a version of the game running in a prototype Oculus Rift at E3 2012, the title has been something of a pet project for modders. There’s some mods available for PC but, last year prominent Oculus Quest modder team, Team Beef, brought it to the standalone headset.

So, which is better?

Well the answer varies as you look across the various aspects of Doom 3, but you’ll find the Doom3Quest mod fighting back quite often. We’ve put together a video highlighting the differences that you can see below.

PSVR’s main benefit is the ability to play with the ever-excellent Aim Controller. As I said in this week’s review, the integration isn’t brilliant across every weapon, but the iconic shotgun works like a dream, as do several others. Developer Archiact has also gone a great job natively integration Doom’s UI organically into the game where it now rests. It’s also just a more solid experience than that on Quest, where I encountered some bugs when I died or tried to get height settings right.

Overall I think the team did a serviceable job of porting that game to PSVR, even if I don’t think Doom 3 itself suits VR well. But, while the Quest version has some shortcomings, it also has areas where it beats out the new, official release.

Graphically the PSVR version is actually a little blurrier than what I saw on Quest 2 (I haven’t tried it on Quest 1), but the design differences go deeper than that. Yes, PSVR’s built-in UI is better than the existing floating elements on Quest, but Team Beef’s port turns the oft-used PDA into an actual in-game item you can read and navigate in 3D space, not just access on a 2D menu. You also get the choice of targeting system on each weapon whereas VR Edition has different, fixed solutions for each type of weapon.

Of course it’s a little more hassle to get the Quest mod up and running and you do miss out on the excellent Aim controller but, when you factor in the other obvious benefits like the full 360 degrees of wireless tracking on standalone VR, Doom3Quest actually ends out coming out on top.