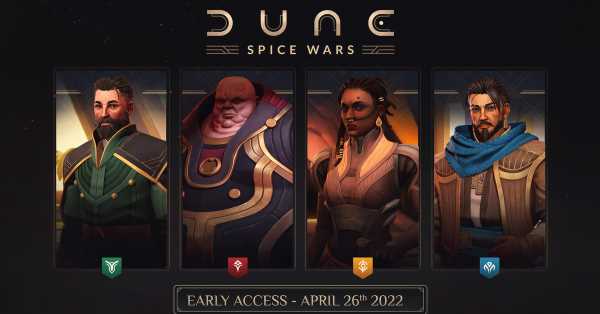 Dune: Spice Wars, the new strategy game based on Frank Herbert’s science-fiction universe and its recent movie adaptation, will launch on Steam Early Access for PC on April 26.

Publisher Funcom and developer Shiro Games — which made the well-regarded Northgard — also confirmed that the Fremen would be one of the four playable factions in the game at launch. (Houses Harkonnen and Atreides, plus a faction of Smugglers, had already been announced.) The game pits the four factions against each other on the desert planet Arrakis, competing for control of its enormously valuable resource, spice.

The desert-dwelling Fremen will naturally move faster around the hostile landscape than the other factions, withstand its conditions better, and attract less attention from sandworms. They can even use the sandworms as a fast-travel mechanism. They excel at stealth and guerrilla tactics, and their aim is to rally all the sietches (Fremen communities) across the planet and expel the Imperial invaders. Their leader is Liet Kynes (the character played by Sharon Duncan-Brewster in the 2021 film), and her daughter Chani (Zendaya in the film) features as one of her councillors.

Dune: Spice Wars is a real-time strategy game with larger-scale 4X elements, including an overworld map. Military power needs to be balanced with infiltration, resource production, and even political influence for success. Sounds a little bit like Total War. The initial early access release won’t include multiplayer or any story driven single-player campaigns.