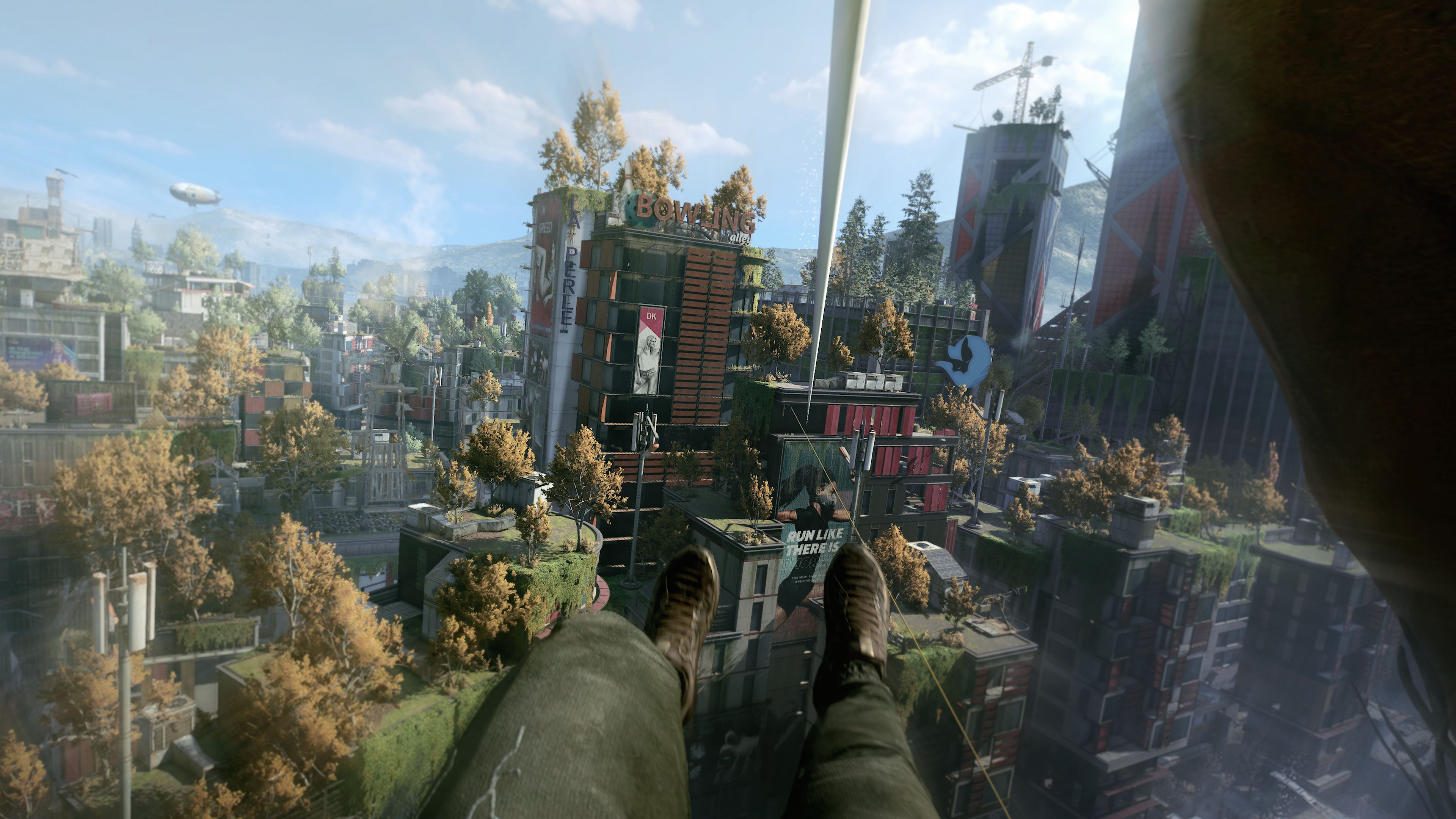 The word ‘schlock’ often comes to mind when thinking of zombie games, and in that respect 2015’s Dying Light didn’t disappoint. Unlike most other zombies games though, it also had an open world environment and an unusually limber parkour style protagonist. It was rough around the edges, with weak storytelling, but it still went on to become a major financial success. It’s been an extremely rocky road to the sequel, to say the least, but the game is now finally nearing completion.

We recently managed to grab a lengthy hands-on preview session with Dying Light 2, that lasted roughly four hours, and speak to lead game designer Tymon Smektala. What we experienced suggests that while Dying Light 2 has the same building blocks as its predecessor, it’s aiming to take zombie games to a new level of complexity and sophistication.

You may recall that the first Dying Light chronicled the outbreak of a zombie-inducing virus in a city called Harran. That led to one of the original’s major criticisms: that its storyline was too predictable and straightforward. Dying Light 2 has a clever way of side-stepping such accusations: it is set 16 years after the original outbreak, in a completely different fictional city called Villedor.

That has led Techland to describe its general vibe as ‘modern mediaeval’. Meaning that, although it takes place in a modern city, life for the survivors, after a decade and a half of dodging zombies, has deteriorated to mediaeval style levels of discomfort.

‘In the first game, it was set in a normal city with infected in it. It didn’t really allow us to go crazy with our ideas. Now, we have created a space for ourselves to be a little bit more imaginative and creative, and build a world we can call our own,’ says Smektala.

It’s a great premise, and the idea of exploring what would happen to civilisation after weathering 15 years of a viral outbreak is somewhat apposite right now. But Techland hasn’t stopped there, it has also added a system it calls ‘choices and consequences’ to the Dying Light blueprint.

‘This is the big, big addition that we have in Dying Light 2: Stay Human. It’s a game about freedom. It’s about you solving situations however you want, through parkour, combat, and sandbox opportunities that we give you,’ says Smektala.

In the first game, there was all of that, and then there was a story which you had absolutely no impact on at all. So, our creative director wrote in the first sentence of the design docs in pre-production: ‘We need to try to give players the same amount of freedom in the narrative that they have in the gameplay.’ Then we settled on choices and consequences not only changing the story but also changing the world around you.’

It’s a hugely ambitious undertaking which, Smektala admits, contributed to Dying Light 2’s original release date being delayed several times. Our playthrough, however, was long enough to allow us to experience… at least the choices, if not the consequences. Instances in which we had to choose between two courses of action, such as trusting a character or rejecting what they wanted, deciding whether to fight other characters or negotiate with them, and whether to spare a couple of brothers we had hunted down or hand them over to the militia.

We also experienced two of what Techland calls city alignments: having saved a water tower from destruction, and brought an electricity substation back online, we then had to decide which local faction to leave in charge of these two key pieces of infrastructure, with different local environmental perks on offer depending on who you leave as the controlling faction.

On top of this, side missions often crop up during story missions, and if you chose to pursue them they also tended to throw up extra choice options. Dying Light 2, if nothing else, is not a game for the indecisive.

The game’s modern mediaeval premise allows Techland to give Dying Light 2 a more sophisticated narrative than its predecessor. The protagonist is Aiden Caldwell, originally a member of a nomadic faction known as Pilgrims, who has come to the city of Villedor to find out what happened to his sister Mia, who is missing and presumed dead.

Villedor has three factions, none of which get on with each other: the authoritarian Peacekeepers; the Survivors, who are just random folk trying to get by; and the Renegades, who have an aggressive street gang vibe. In the first part of our playthrough, Aiden was performing missions for the Survivors, holed up in an old church known as the Bazaar, while trying to ascertain whether they were responsible for the recent death of the Peacekeepers’ local leader Lucas.

Aiden’s contact at the Peacekeepers has promised him access to a part of Villedor called Central Loop – where he hopes to pick up the trail of his missing sister – if he finds Lucas’s killer, so while performing missions for the Survivors you’re also able to indulge in a touch of detective style work, using a blood trail detecting mechanic the game calls survivor sense.

As you get to know the Survivors – primarily leader Sophie and her feckless brother Barney – you’re drawn into their world, which leads to some tough decision-making at various points when, having got to like them, incriminating evidence appears to indict them.

Their paranoia and hatred of the Peacekeepers means that, towards the end of the playthrough, Aiden’s relationship with them breaks down, to the extent that you have to fight a mini-boss battle with Hermann, Sophie’s bodyguard. Unlike its predecessor, Dying Light 2 won’t face accusations of having an overly basic storyline.

Gameplay-wise, Dying Light 2 doesn’t deviate massively from its predecessor, but shows plenty of signs of extra refinement. Front and centre throughout is its melee-based combat. The first Dying Light added guns after a while, which many felt was a cop-out, but Dying Light 2 has resisted that temptation. Quite wisely, since its melee engine is excellent, with loads of fine control, even from weapons that have been cobbled together from old street signs and the like.

There’s a growing array of moves that you can add as you accumulate skill points, as well as some major satisfaction on offer when you time a single slash so accurately that it decapitates a zombie in one. You can craft Molotovs, mines, and the like, as well as health packs and immunity boosters (which Aiden must use after dark), with your zombie-slashing exploits accompanied by some great squelching sounds and a liberal splash of gore.

A few new gameplay mechanisms were also on show, such as dungeon-like bandit camps, which you can turn into safe zones for your chosen faction by taking out their leaders and tearing down their symbolic totems. As in the first Dying Light, it makes most sense to use rooftops to traverse the city, particularly at night. The parkour engine has its own skill tree, and there’s plenty of satisfaction to be derived from Aiden’s ability to climb pretty much anything.

Awarding infrastructure buildings like water towers and electricity substations to the Survivors leads to the construction of extra ziplines and cushioned landing points when jumping off buildings; awarding them to the Peacekeepers, on the other hand, results in the construction of extra zombie traps, and a general reduction in the number of zombies on the streets. Or at least that’s what Techland said – we never really got the chance to revisit an area after performing a city alignment, so couldn’t really assess the impact of our choices on the environment.

In the final part of our playthrough, we moved to the city’s Central Loop. This was once its financial district, so it’s punctuated by skyscrapers, and there we acquired a very useful object in the form of a paraglider – with upward-facing air vents abounding you’re able to perform extended gliding sessions with relative ease.

We also came across the Renegades and earned additional respect from the Peacekeepers by helping them take some out. Like all the still-human adversaries in the game, they are much trickier opponents than bog-standard zombies.

In Central Loop, we also sampled some of the game’s fairly elaborate puzzle-solving, which extends beyond just platform style sequences. In an electricity substation, we had to parkour around, connecting cables between generators to form a circuit, which sounds simple but requires a modicum of thought and head-scratching.

Our time playing through two chunks of Dying Light 2 left us with the impression that Techland has done a fine job of crafting a sequel to a game that, while commercially successful, had a more muted critical reception. The Polish developer has certainly addressed the original game’s weak points though and added plenty of new features that bring extra appeal.

The usual preview caveat applies, in that we can’t say whether it will hang together as a complete entity, but what we experienced certainly proved entertaining and, thanks in large part to its suitably fettled melee engine, extremely satisfying to play. Dying Light 2 has been a long time coming but judging by this preview it will be worth the wait.