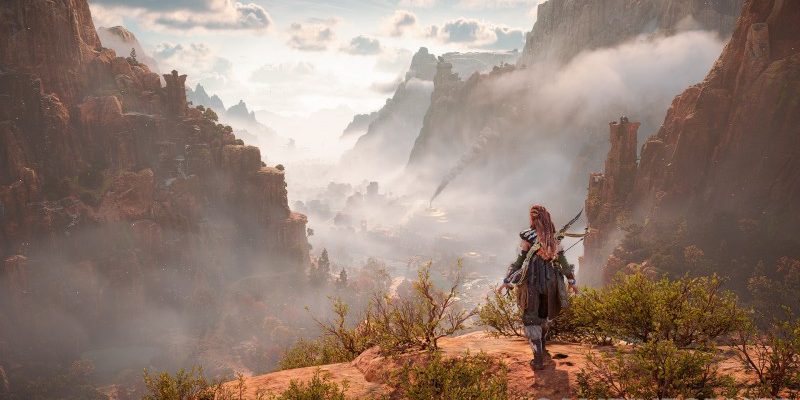 Horizon Zero Dawn set a solid foundation for Guerrilla Games to build upon in Horizon Forbidden West, and the developer isn’t about to let this opportunity pass it by. For the upcoming sequel, Guerrilla Games looked at fan feedback, revisited ideas that were too ambitious for the first game, and tapped into the studio’s well of creativity to make Aloy’s exploits even more exciting. For our latest cover story, we saw Forbidden West in action and learned firsthand about how the sequel is making some worthwhile changes to improve upon its predecessor.

We expect improved graphics with each new entry in a series, and so far, the footage shown for Forbidden West has been extremely impressive. But sometimes it takes seeing the game up-close to really notice its finer points. “Some of the big upgrades we’ve made to our cinematics include full motion-capture, better facial animation, and a top-tier cast,” says narrative director Benjamin McCaw. “That level of quality goes across the entire game, including some of our minor scenes.” In the demo we saw for the cover story, dialogue exchanges felt more authentic between characters due to these improvements, and it was especially noticeable in the facial animations. Aloy can now convey much more with her body language and eyes.

Guerrilla wants settlements to feel “more lived in” and exciting to explore. This means townspeople will be more active, and you’ll experience fun little moments throughout their day. “We’ve upgraded our civilians and settlements since the last game with an improved crowd system, better animations, and much better audio,” McCaw says. “So everything should feel a little bit more authentic and lifelike.” During our demo, as we headed toward a tavern, we saw folks stumbling around outside of it, muttering incoherent sentiments and searching for their drink. Entering the actual tavern, things became more spirited, with patrons passionately ranting about their troubles, happily dancing together, and even a group singing merrily about their drunken tales as they banged on their table to establish a beat.

Guerrilla has completely revamped the skill tree to give players more options to play how they want. It now features six different playstyles: warrior (melee), trapper (placing/disarming traps), hunter (ranged weapons), survivor (health/resource), infiltrator (stealth), and machine master (hacking). It appears each specialization has approximately 20-30 skills. The trees offer a mix of active skills, like using fewer resources in crafting, and passive boosts, like low health regen. Each tree also has its own unique Valor Surge, which are new special skills that can be executed once you fill up a meter by playing tactfully. In addition, certain boosts and skills can be upgraded to higher levels to raise their effectiveness. However, the biggest game-changer is the outfit and weave boosts, which can take certain skills past their level cap, raising some stats 300 percent.

Aloy’s scanning abilities now reveal more valuable information than ever. Getting around should be easier, as she can now scan for grapple points, which are annotated in yellow, in the environment. However, the most beneficial aspect is her ability to learn more about her mechanical adversaries. Guerrilla wants to give players as much information as possible to inform their strategy, so you’ll find out more than just about their weaknesses and main stats when scanning. You can now learn everything from if a machine has a key upgrade resource to if a part is indestructible. You can even uncover if one of their weapons is detachable and can be used for your own gain. Aloy can also tag parts, giving them a purple hue. It not only makes it easier to target these components but also ensures the parts don’t get lost in the chaos on the battlefield once you shoot them off.

If you didn’t feel the side content was worth your time in Zero Dawn, Guerrilla is working to change that in Forbidden West. Its solution? More interesting side quests and greater rewards for engaging with them. “There’s a lot more variety in that sense – a more sense of accomplishment that you actually get something cool in return for doing these quests,” says game director Mathijs de Jonge. “That was another part where we felt like we had some room for improvement. So you get a cool weapon or you get a cool outfit, something that’s really useful for your next quest or activity.”

If you thought there was too much on the screen to keep track of in Horizon Zero Dawn, you weren’t alone. Guerrilla took that feedback to heart going into Forbidden West and worked to have fewer distractions on the screen. “By default, the game starts on a minimalist mode, where there’s as little HUD information on the screen as possible,” explains de Jonge. “But in this mode, you can also just swipe up on the touchpad, and that will immediately bring up all the important information, such as objectives, or maybe your health, or your inventory.”

If you were hoping for better relationship-building between Aloy and her companions, you’ll be happy to know this was an area of focus for Guerrilla with Forbidden West. The team spoke a lot about its efforts to improve its companion characters in hopes of players forming stronger connections to them. “The big focus, though, that we wanted to change from the first game to the second, is that you just get to spend more time with key characters,” McCaw says. “That’s something we tried to do consistently throughout the game. Not just for characters that you meet along the main quest, but also certain side quest characters; they don’t just go away after one quest.”

The Ability To Create Jobs For Upgrade Parts

Really want to upgrade your weapon or armor, but don’t feel like searching aimlessly for the part in need? You’re in luck! Now, with a click of a button in the crafting menu, you can create a job to locate the resource you need. This will activate a quest and put a path on the map to where the machines holding them reside. It means you’ll never have to waste time just hoping for a drop, or wondering if you’re in the right place.

This is also a good thing, as machine parts will be more vital this time around. “In [Horizon Zero Dawn], it was more about the metal shards,” de Jonge says. “In this game, we tried to bring the machines and the encounters with the machines more into play, so a lot of the upgrades also cost specific machine resources. You have to go out and hunt specific machines.”

Want more on Horizon Forbidden West? Be sure to check our hub below, where you can gain some insight into the new machines and powers at your disposal.