Caria Manor in Elden Ring is an optional legacy dungeon that might seem like it’s not worth the time. Abominable hand spiders, a challenging boss, and a massive courtyard make it easy to heed Iji’s warning and leave the manor behind you. However, you’d be missing out on some of Elden Ring’s best narrative arcs and items.

Caria Manor is where you’ll find Ranni, begin her quest, and eventually – if you see it through – unlock the Age of the Stars ending. The Sword of Night and Flame lives here, along with two very useful NPC vendors, and some excellent boss drops from Loretta at the far end of the manor. This guide includes the best paths through the manor and where to get the must-have items, including a new cookbook and a Golden Seed. 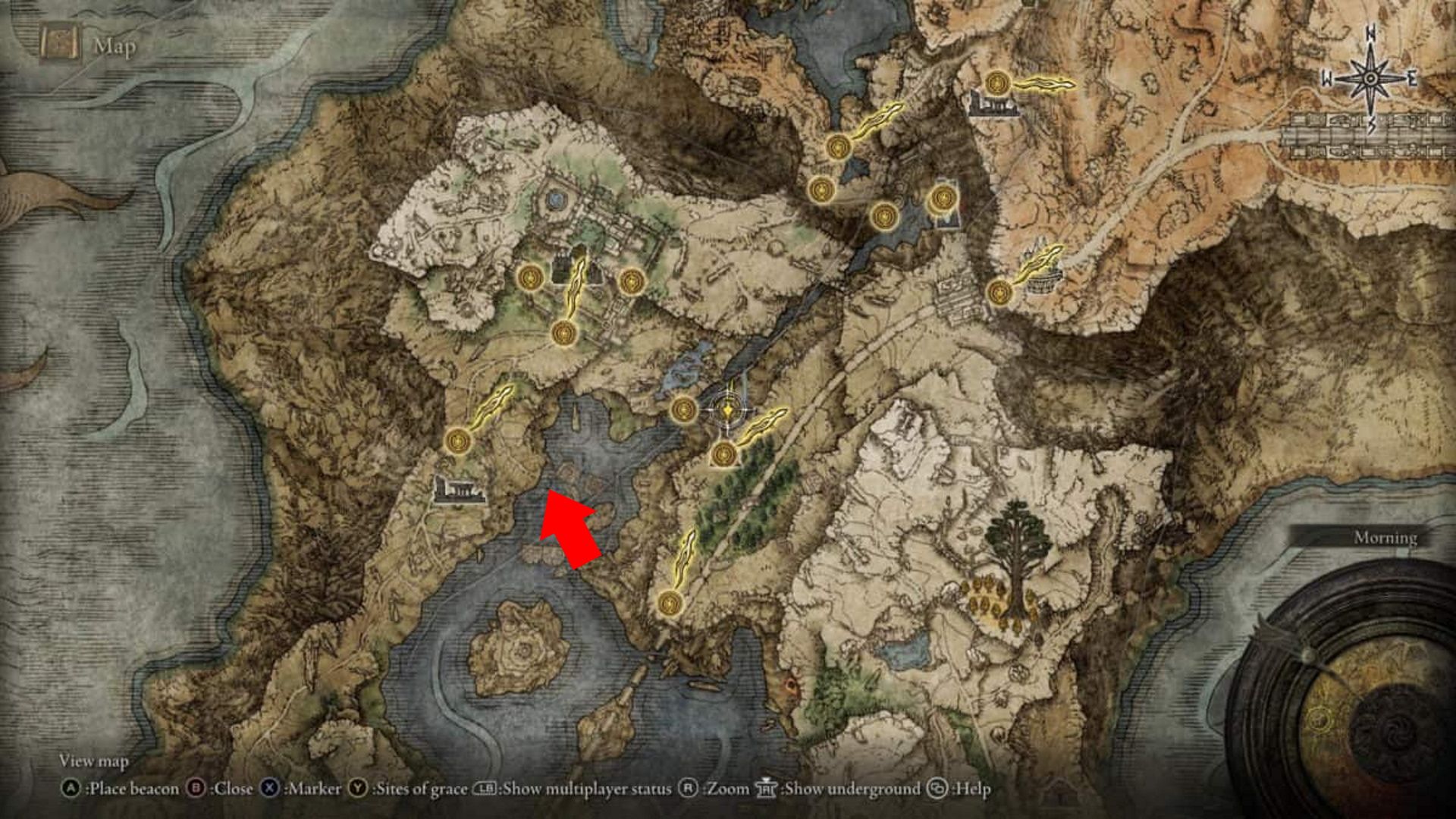 Caria Manor is in western Liurnia, north of the Kingsrealm Ruins and west of Bellum Church. If you’re in the swampy bits, there’s a path north of Tetsu’s Rise that leads north onto land, near Iji the blacksmith. Speak with Iji if you want some background about the manor and its inhabitants. He’ll warn you of the manor’s magical security system and recommends you stay away – advice you should mostly ignore.

The manor’s defenses consist of blue magic bolts raining down from the sky at intervals, bolts that can quickly shred your health. You can move out of their way on Torrent as you approach the manor, but the easiest path forward is sticking to the right side of the road, near the cliffs. The bolts don’t seem to strike there as often.

Once you arrive at the manor entrance, the bolts stop. Touch the Site of Grace and restore your flasks if need be.

Before going in, make sure you have fire of some kind – pots, spells, or grease. The giant hands inside are weak to fire, and it makes dealing with them much simpler. An alternative is dual-wielding a torch and your main weapon, which doubles as a source of light.

You should also be at least level 60 before attempting the manor, with a weapon that’s +8 or thereabouts. It’s possible to complete it at a lower level, but it’s also much more difficult. 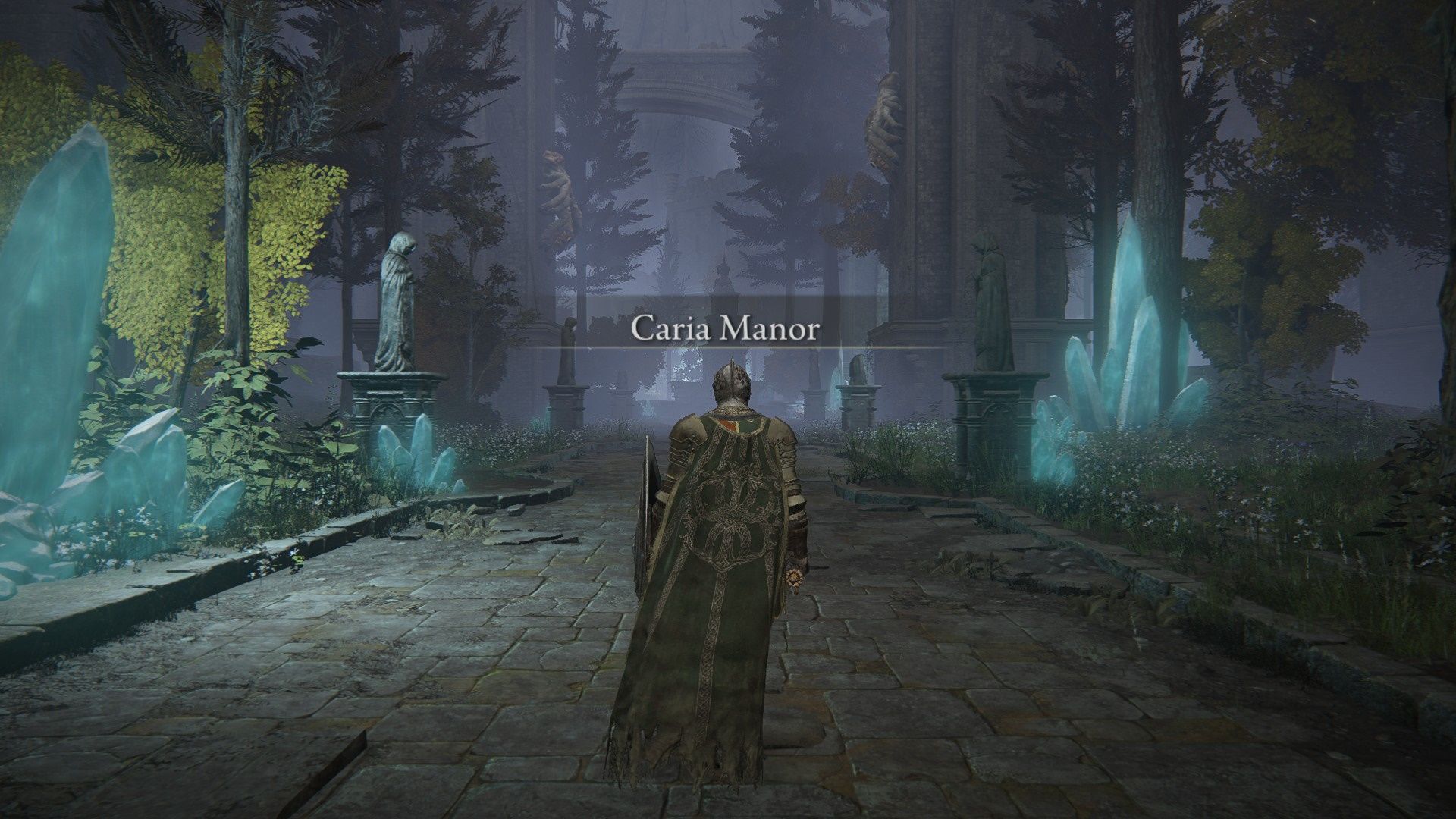 Once you pass the gateway, you’ll enter a massive, dimly lit courtyard with three main paths to choose: left, right, and straight ahead. The thing to keep in mind about Caria Manor is that most of the good items are on the upper levels. The ground level has a few useful items, but mainly it has large and small hand spiders. And some of them aren’t even in plain view. Walk slowly while you explore, and keep an eye out for the little raised edges shown in the image below.

These are fingertips. If you walk over them, a hand spider bursts forth and grabs you, adding a whole new dimension to the concept of being Tarnished. You can use a thrown object – pots or darts, for example – to force the hands from their hiding places.

If you turn right when you enter Caria Manor, you’ll encounter a few small hands and two giant hands. One is in plain view, and the second giant hand is on the wall to your right. Unless you want a few hundred hard-won Runes, you can just dash ahead towards the staircase.

Enter the room and deal with the crawling mages. You’ll find Glintstone Craftsman’s Cookbook [6] inside. The rest of the rampart has nothing of interest, but be aware of some Glintstone ambush traps and two sorcerers along the path if you decide to explore further.

Back on the ground again, if you follow the rampart wall around to the back of the courtyard, it eventually turns into a rocky area. At the far back, behind that rocky area, you’ll find a corpse with the Ice Crest Shield. It’s not a spectacular shield, as it has low physical and magic negation. You could do worse if you need an upgrade, but the Carian Knight Shield – from the miniboss in the Academy of Raya Lucaria – is a better option.

There’s nothing of note to the left other than a swarm of hands, big and small. You’ll find a few basic crafting materials, such as Rimed Buds and Rowa Berries, but it’s not really worth the effort unless you’re after Somber Smithing Stone [2]. The hands in Caria Manor drop Somber Smithing Stone [2] regularly. These are only good for lower-level weapon upgrades, so there’s not much use in hoarding them unless you’re experimenting with several weapons.

The left path eventually takes you back to the main path through the courtyard.

This path is the shortest way to the upper level, though it's also one of the more dangerous routes. The fountain in the middle is crawling with small hand spiders, and the wandering giant hands tend to come this way as well, especially once a fight starts. Your best bet for making it through is just running past it all.

The path eventually leads you to a doorway. Inside is a spirit, which you can ignore, and a staircase that takes you to the chapel. There’s a Site of Grace here. Rest, and head back outside. 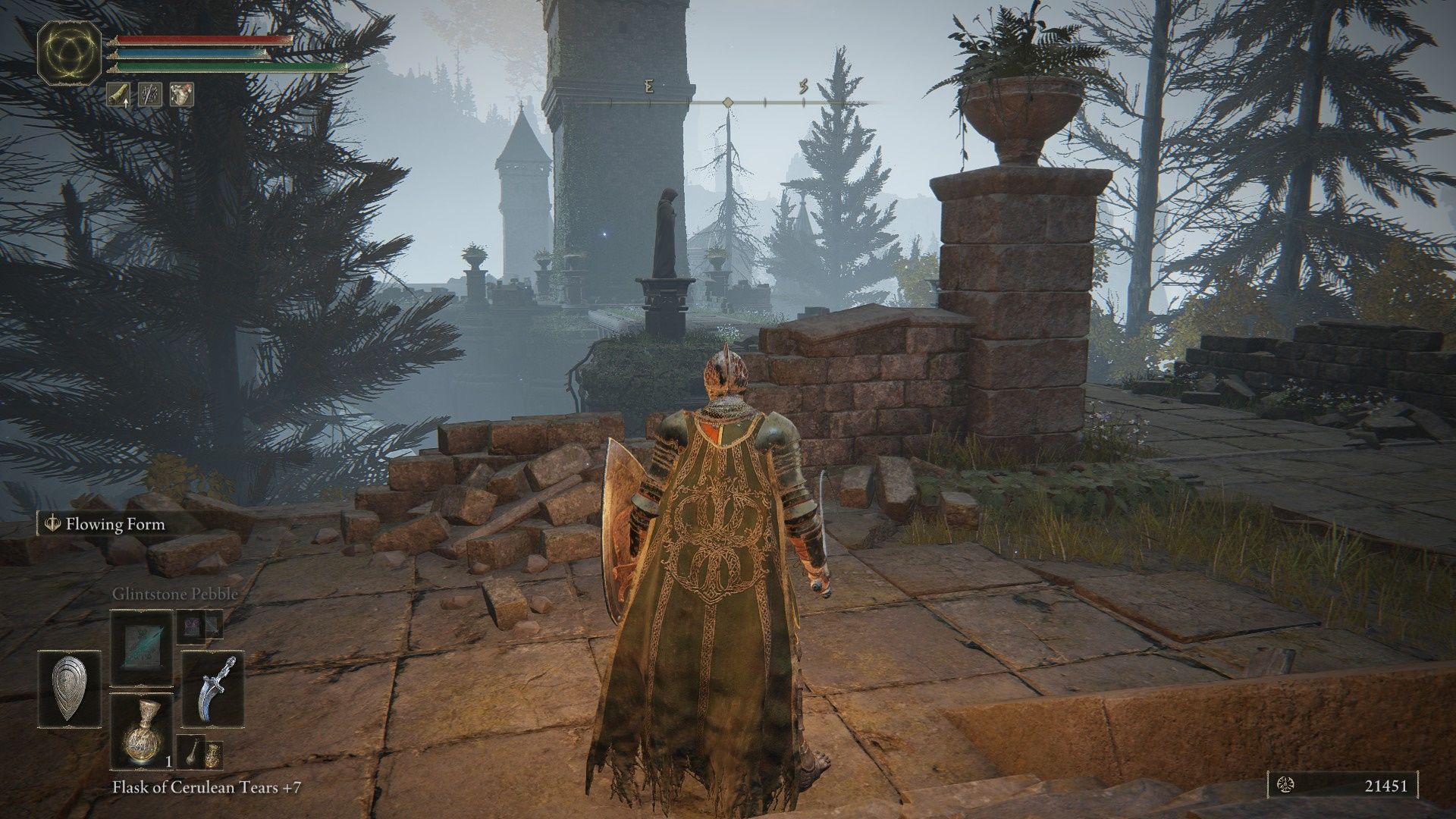 The next section takes place on the ramparts above the courtyard. It’s free from hand spiders but has its own unique challenge: ghostly Carian soldiers.

Have the sound on for this segment if you can. There’s an audio cue that alerts you a soldier (or three) will appear in a second.

These ghosts use crossbows, swords, and thrown items that generate three Glintstone projectiles. Most shields won’t stop the projectiles, so your best bet is dodging forward or backward to escape them. Make sure to take out the soldiers before moving forward, so they don’t follow and overwhelm you.

Take a left turn when the path forks, and follow the rampart until the end of the tower, where you can jump down and eventually find the Sword of Night and Flame. Otherwise, just follow the path until you reach a staircase and an elevator. 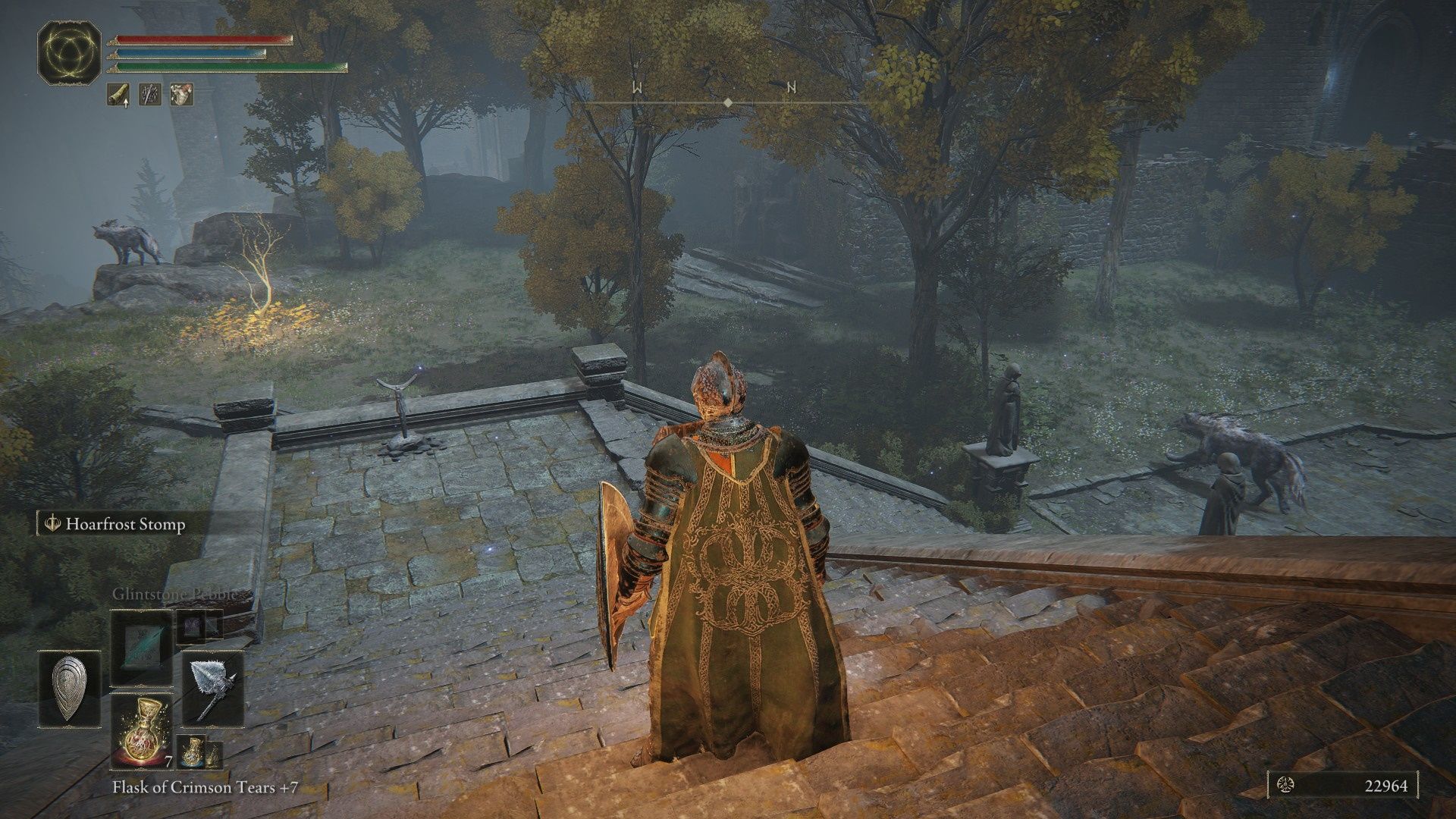 The elevator lets you out at another Site of Grace. Activate it, then go outside and grab the Golden Seed. You can fight the two wolves here, or just ignore the one on the cliff and stealthily sneak past the other one.

At the top of the stairs, you have a choice. You can go forward and deal with several mercenaries, Carian sorcerers, and a Troll Knight, or you can take a shortcut to the left that lets you bypass these enemies. The Troll Knight is essentially a non-gaol version of Bols, Carian Knight, so if you’ve cleared the Cuckoo’s Evergaol, you’ll know what to expect. It uses the same strategy of casting Glintblade Phalanx and overwhelming you with heavy sword attacks. 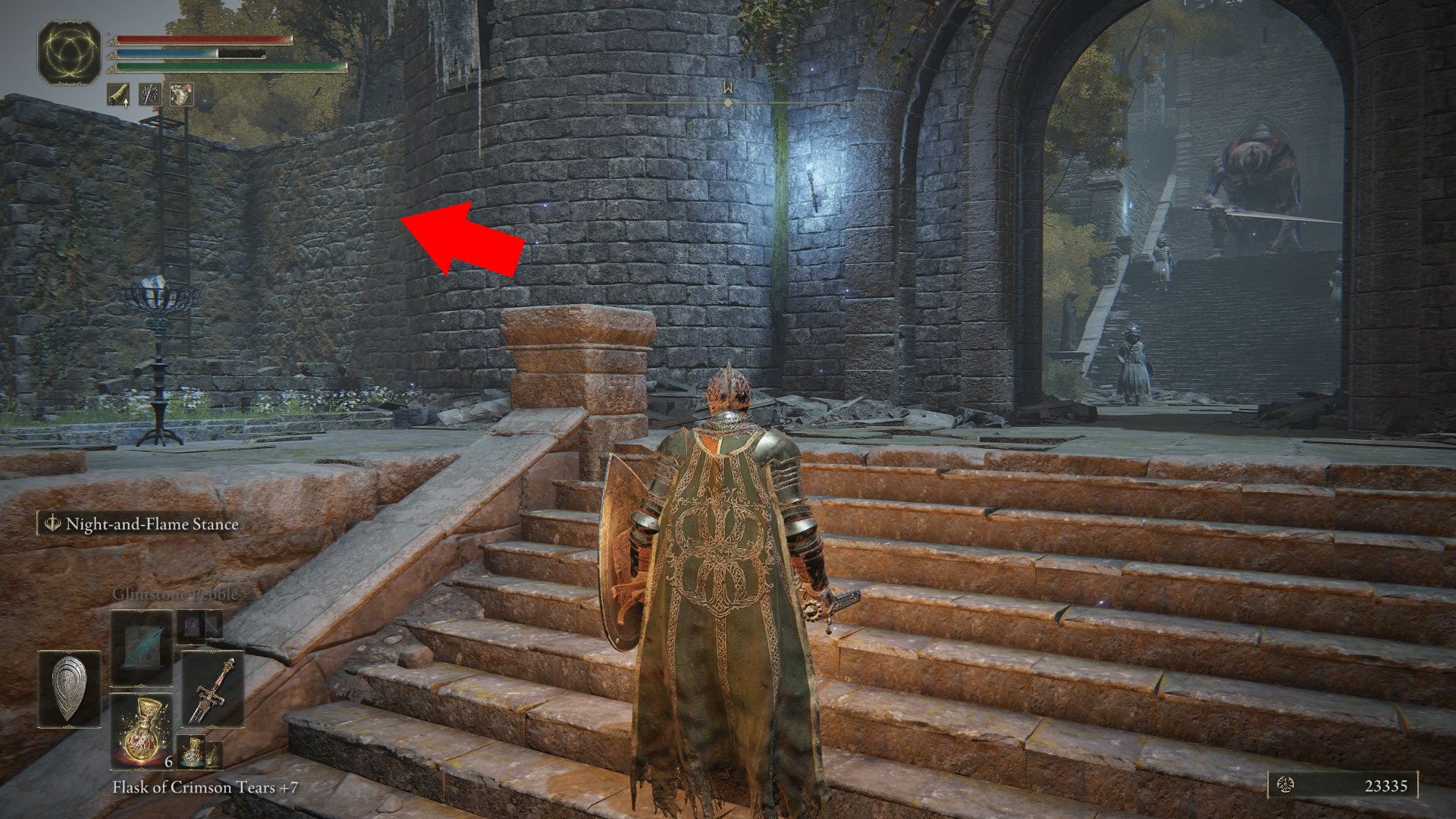 The shortcut has a noble and a mercenary to deal with, and it’s generally much easier and safer. By the end, you can turn left and rush up the stairs to bypass the remaining mercenaries.

Before heading through the fog door, you can take a left to go under the stone archway and jump down into a graveyard. There’s a number of jar warriors here, though you can mostly avoid them. Keep following the ledges down, and you’ll eventually reach a set of ramparts with a corpse that has the Ash of War: Carian Grandeur on it. Carian Grandeur is essentially the Ash of War version of the Carian Greatsword sorcery, which summons a massive magical blade that smashes into foes in front of you.

Fast travel back to the Upper Level Site of Grace, then make your way to the fog door again. Royal Knight Loretta awaits you on the other side.

Once you’ve defeated her – these strategies should help with that – exit the other end of the arena to enter the Three Sisters area. This is technically not part of Caria Manor anymore, though you can only access it by clearing the manor. 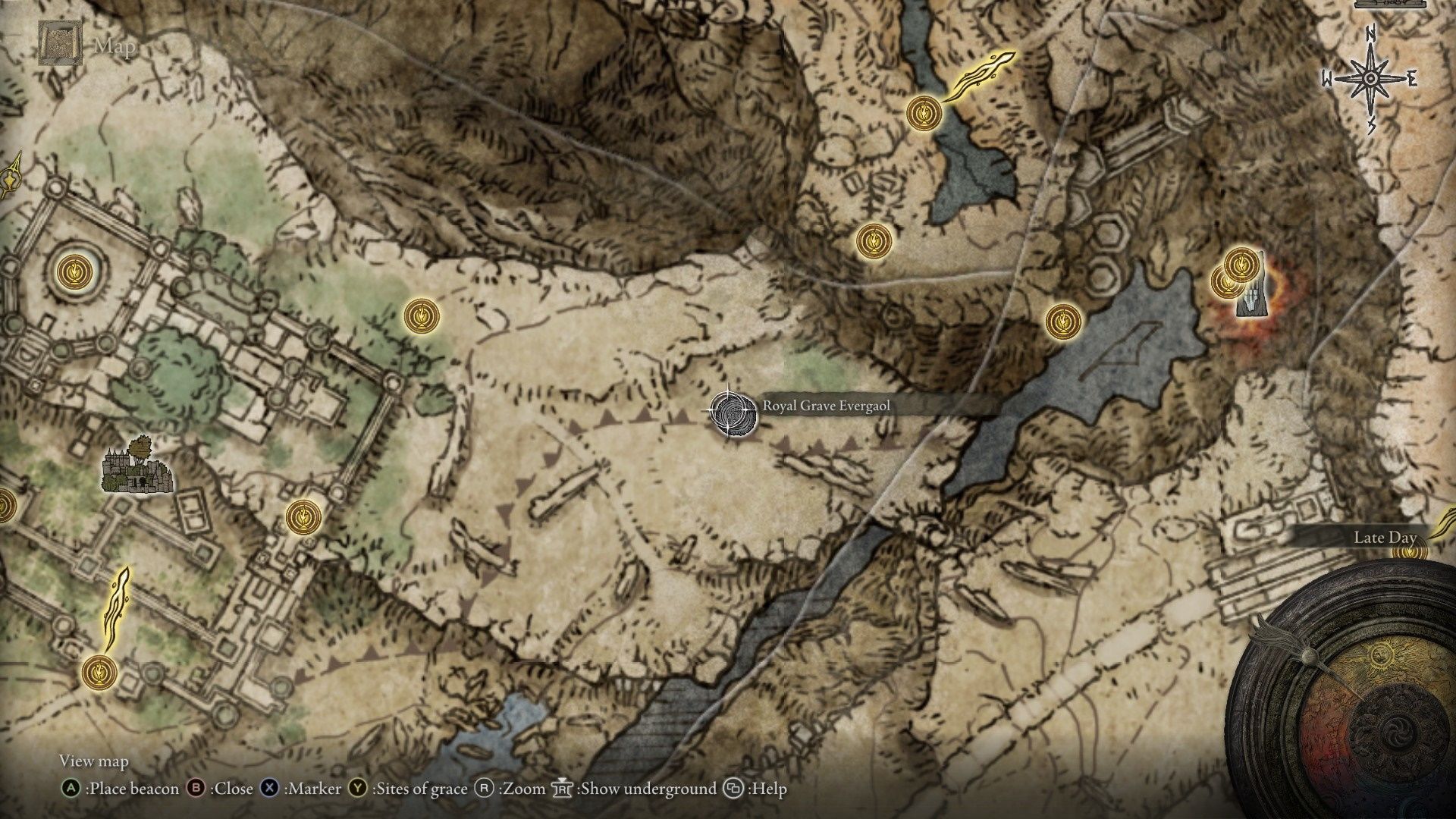 There are a number of important questlines and points of interest in Three Sisters, the area behind the manor. If you take a right after entering the area, you’ll eventually reach a graveyard where you can fight a non-boss version of the Red Wolf of Radagon and find a Larval Tear for rebirthing with Rennala. Further on is the Royal Evergaol, where you can fight the Alabaster Lord and get the Meteor sorcery.

To the left, you’ll find three towers: Ranni’s Rise in the middle, Renna’s Rise to the north, and Seluvis’ Rise to the south. Ranni’s Rise is the only one you can access for now. Ascend the tower, and speak with Ranni – assuming you haven’t begun the Radahn Festival yet, in which case you’ll have to wait until you defeat Radahn – to start her quest. That opens Seluvis’ tower, where you can begin his quest and purchase some sorceries.

Glintstone Dragon Adula roams the area around Seluvis’ Rise, though she flies away after her health reaches 50 percent, to an area you can’t reach until later in Ranni’s quest. Renna’s Rise contains the Snow Witch armor, but Renna's Rise only opens after using the Inverted Carian Statue and giving Ranni what she requests.

South of Renna’s Rise is a set of ruins, wherein you’ll find a scarab that drops the Ash of War: Chilling Mist. This coats the weapon in frost and emits a small cloud of frost that damages enemies it touches. 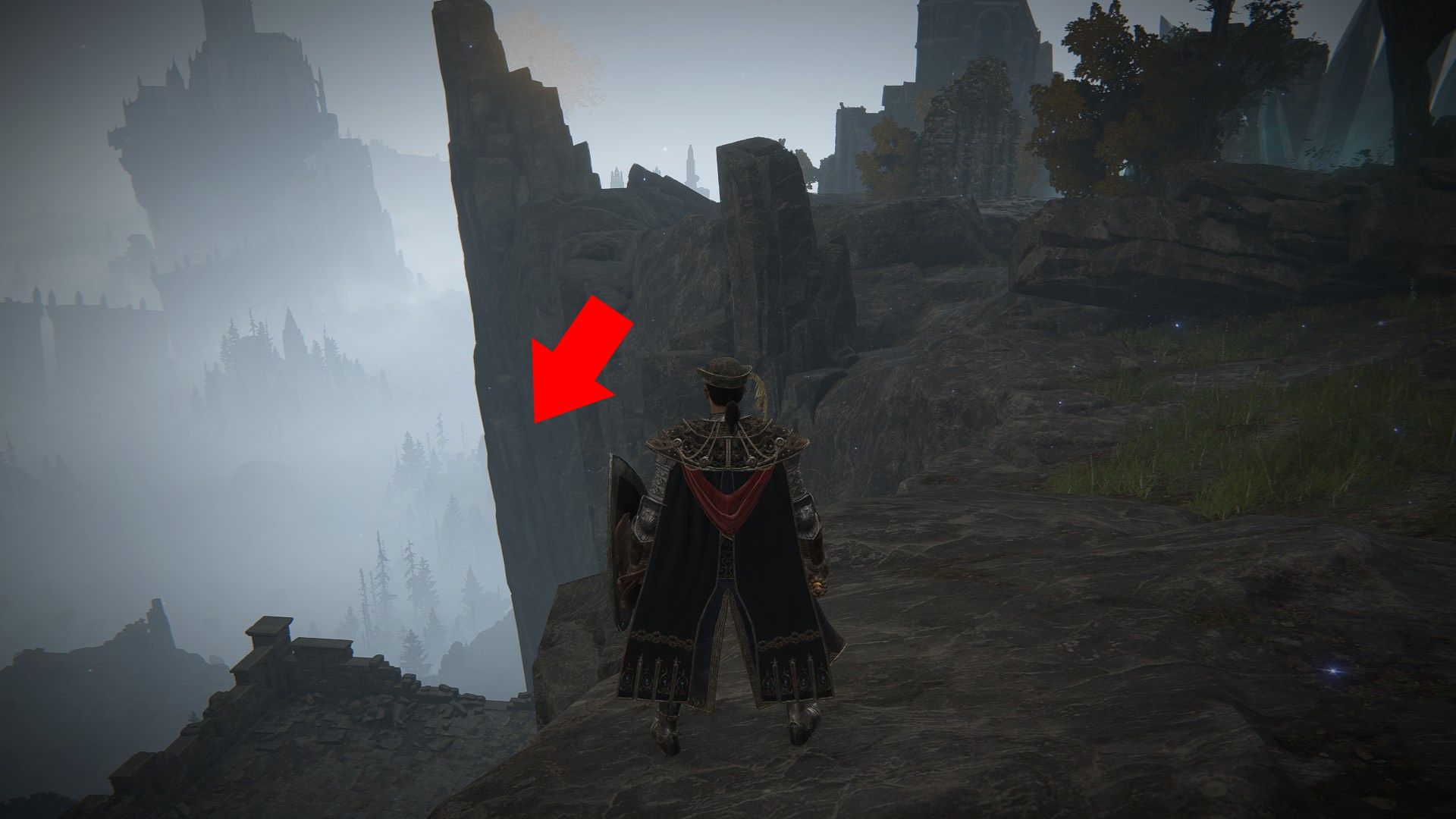 Finally, you can descend the cliffs near Seluvis’ Rise and enter a chamber where Pidia, Carian Servant resides. Pidia sells a handful of useful items, including a Larval Tear, so it's worth paying him a visit.