With Elden Ring's continued streak of amazing and challenging bosses, there are some that are slightly more challenging to defeat than others the more you progress throughout The Lands Between. The game's vast map is riddled with underground catacombs and well-hidden cave entrances that are easily missable, holding bosses inside that you've never seen. One of them is Necromancer Garris.

Wielding a flail and having a snail made out of a skull wheel around as support, Necromancer Garris serves more as a hostile NPC than a boss, but make no mistake, he hits hard. Here is a detailed rundown of how to defeat Necromancer Garris quickly and efficiently. 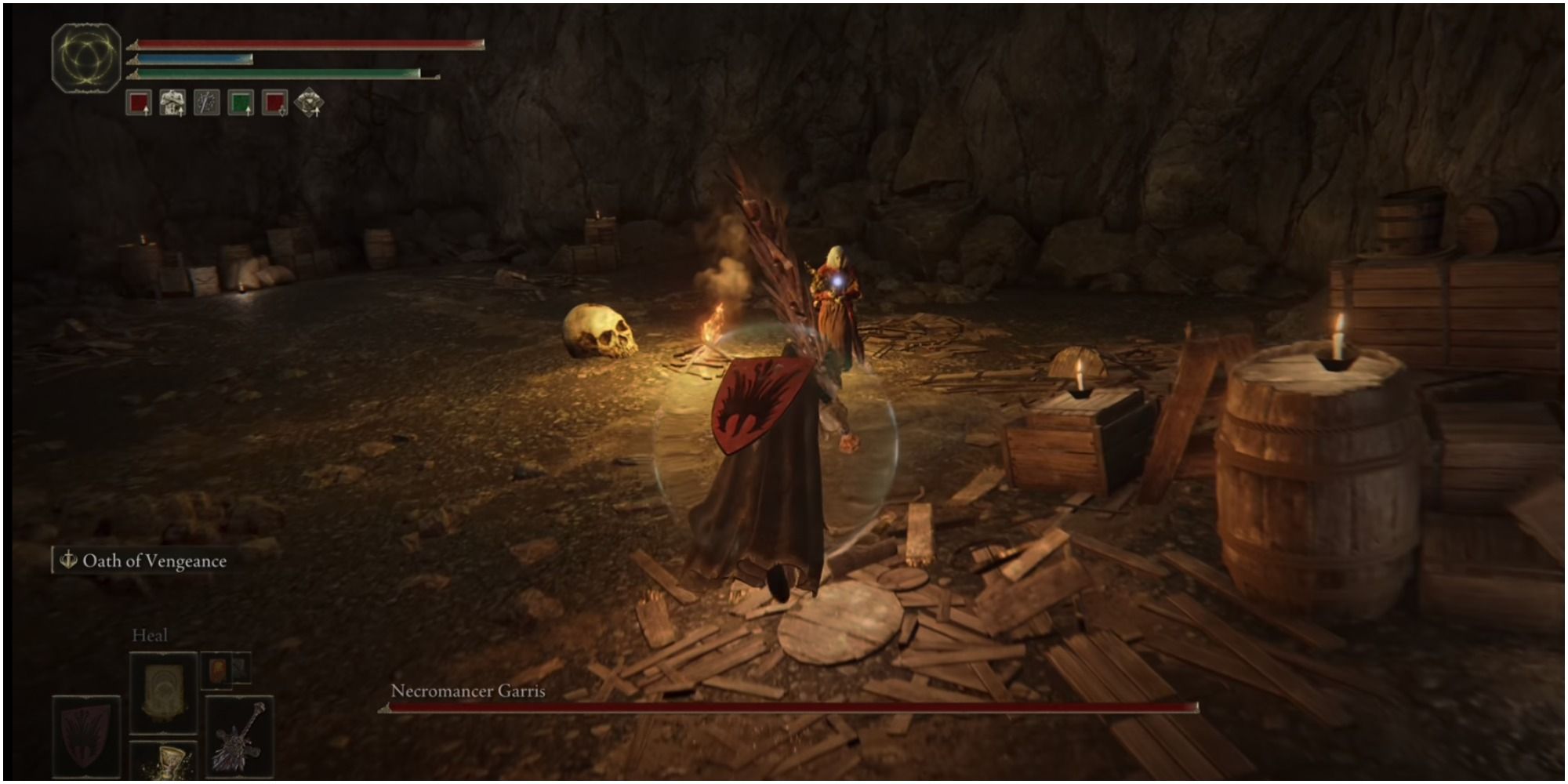 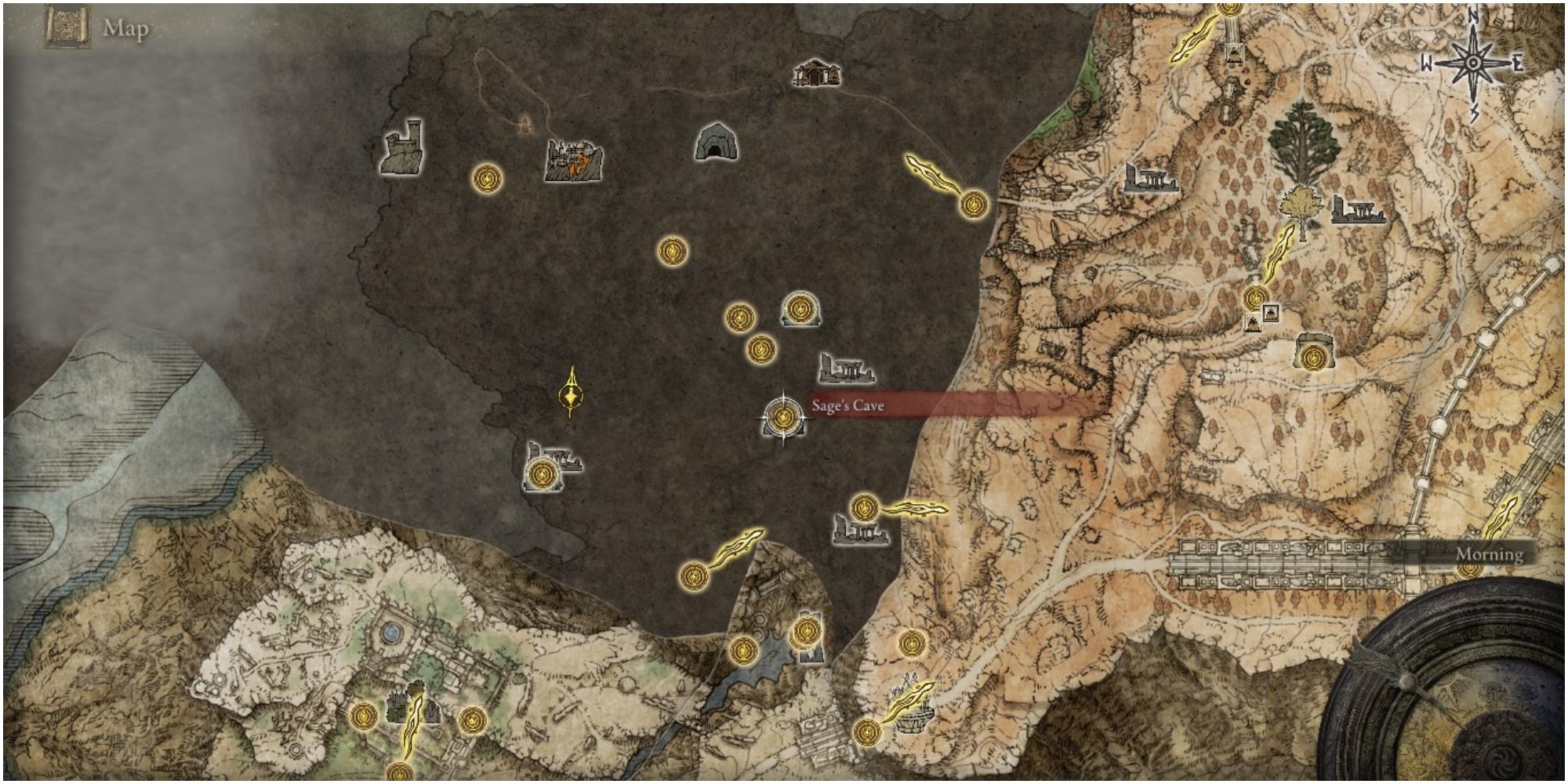 Located in the western end of the Altus Plateau in Sage's Cave, the closest Site of Grace – rather than the one inside the cave – is the Seethewater River Site of Grace. Interestingly, there are two bosses within Sage's Cave – Necromancer Garris and a Black Knife Assassin. You will find Garris behind a hidden wall and through a fog wall.

In the case of this boss, Spirit Ashes are available, but other players, unfortunately, cannot help. While called a necromancer, Garris largely fights melee with his flail, with a wheeling skeleton snail rolling around and dealing damage to back him up. For this fight, using a heavy weapon (such as a Greatsword) is highly effective against Garris and easily staggers him. Arming yourself with a weapon that can inflict Bleed is also recommended and can help end the battle far quicker. 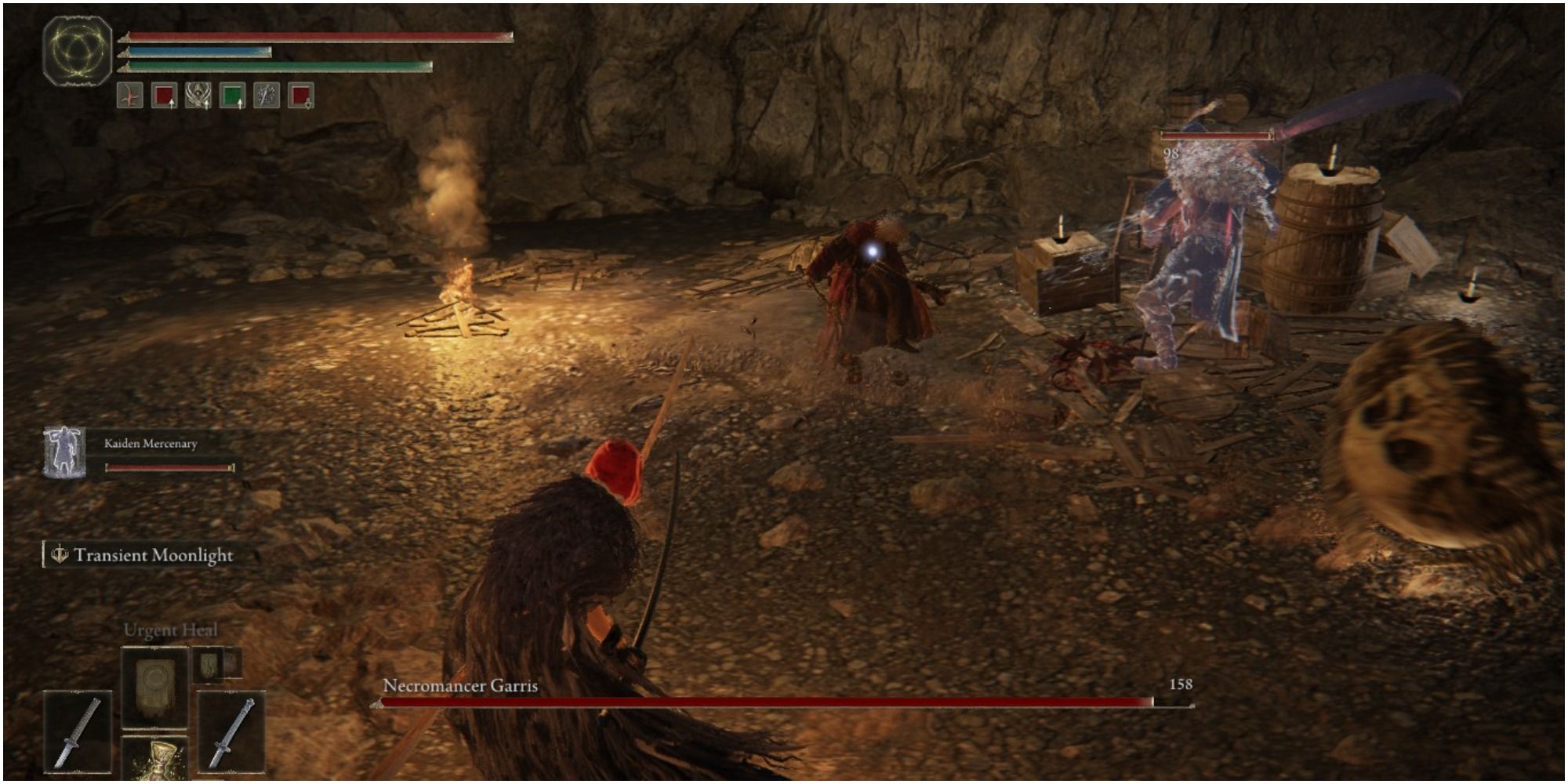 Necromancer Garris, as said before, will largely come at you with his flail. He has got his skeletal snail lackey to back him up, but it is very easy to defeat despite its irritating presence. Without further ado, here are is the full repertoire of Garris' attacks. 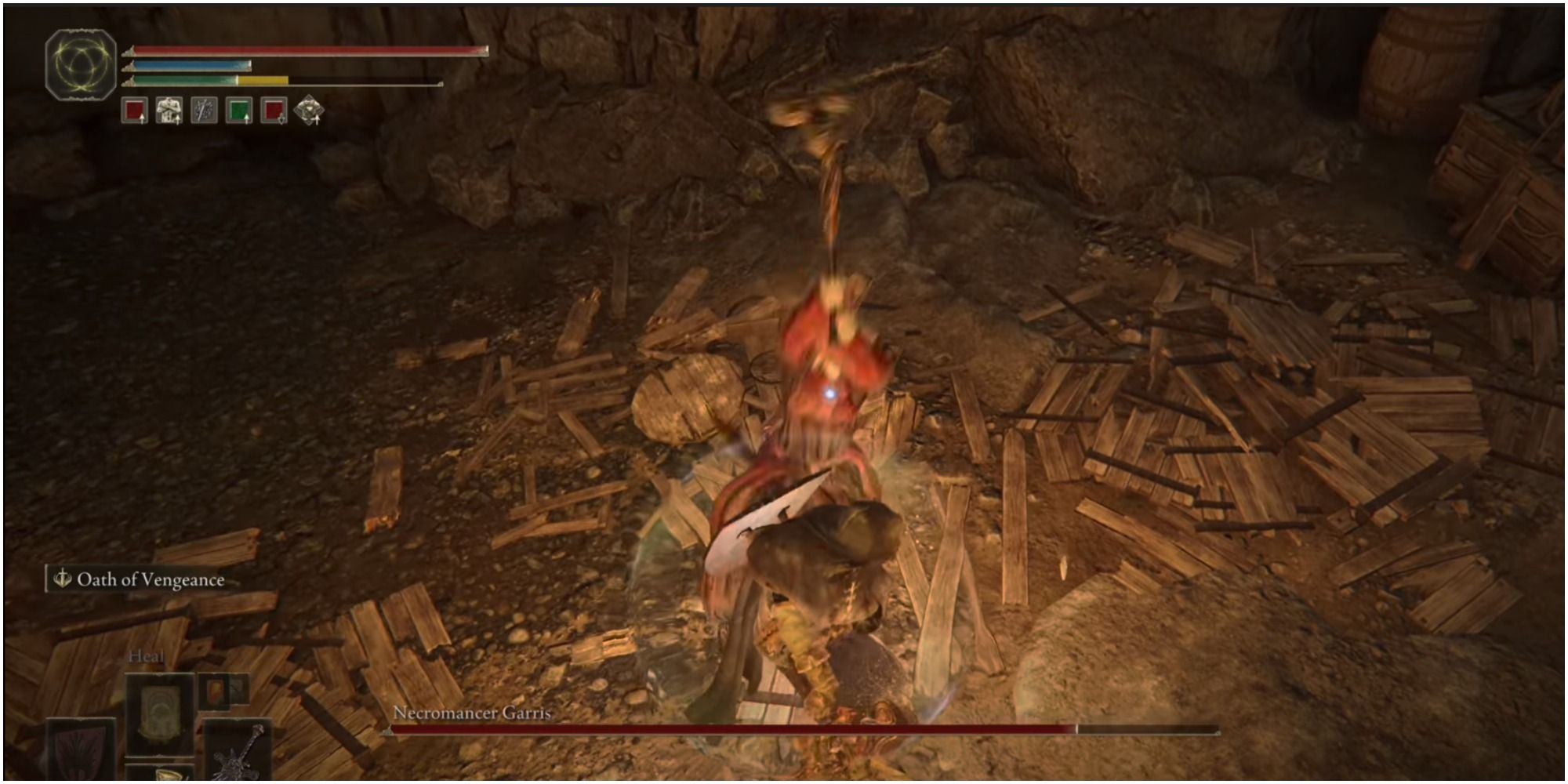 A basic swing attack that Garris does a majority of the time. But unlike most flails, does not inflict Bleed damage.

Counter: Roll away or equip Opaline Bubbletear to your Flask of Wondrous Physick prior to the fight for extra defense. 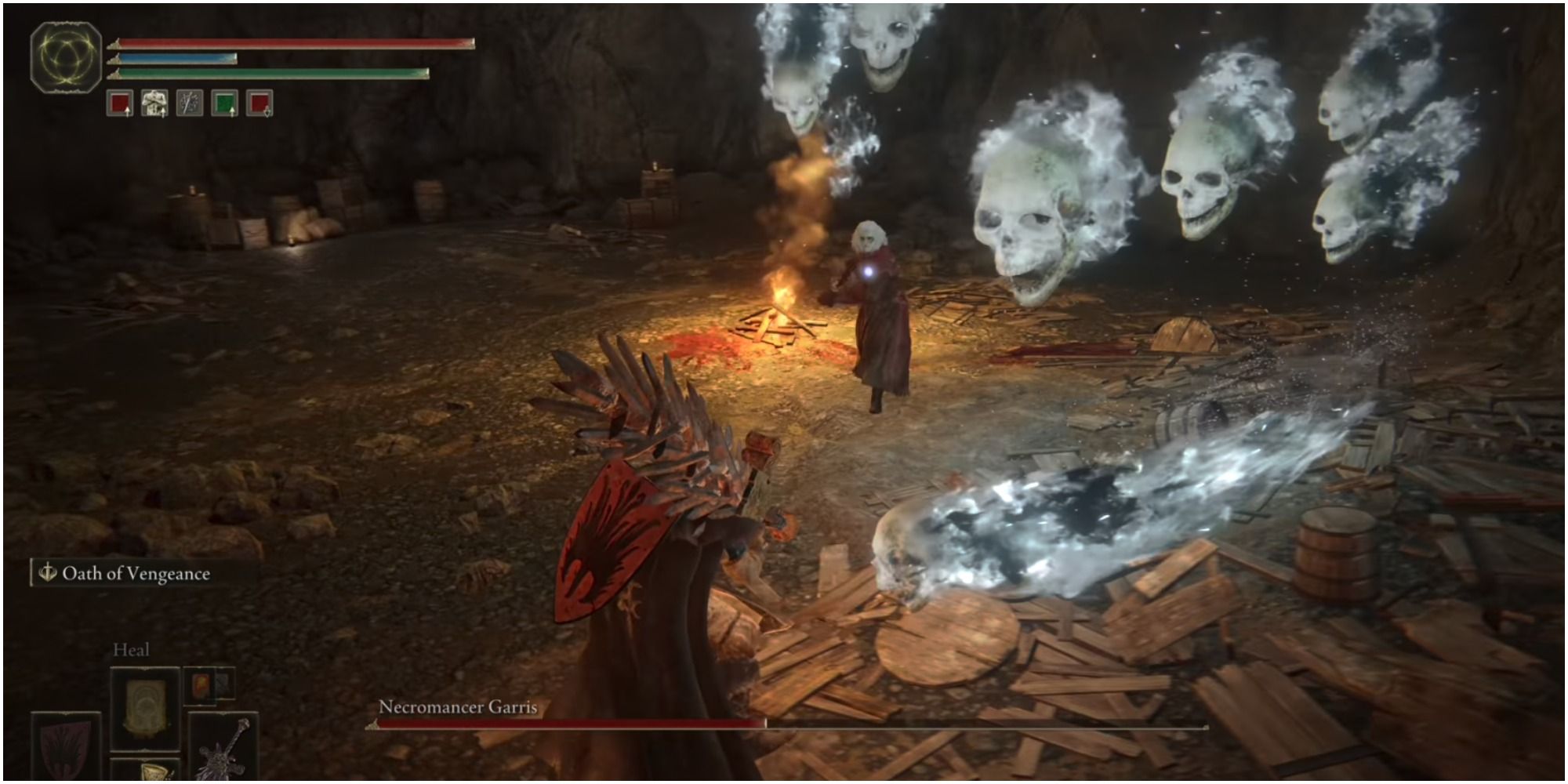 Counter: You cannot block this attack, so simply roll in the opposite direction or dash away. 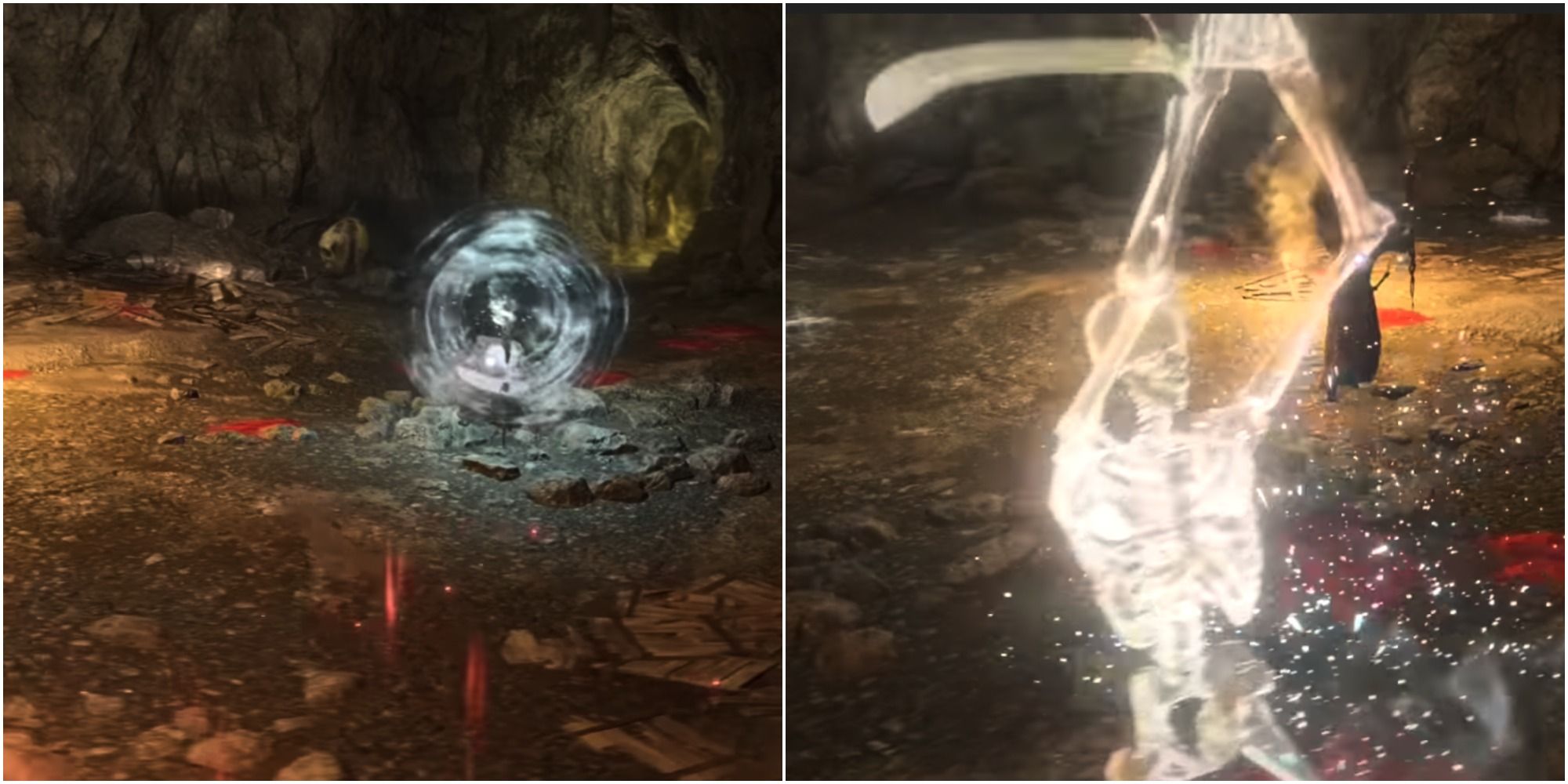 Counter: Whenever Garris slams his weapon, as soon as you see the skeleton emerge, instantly bob and weave. 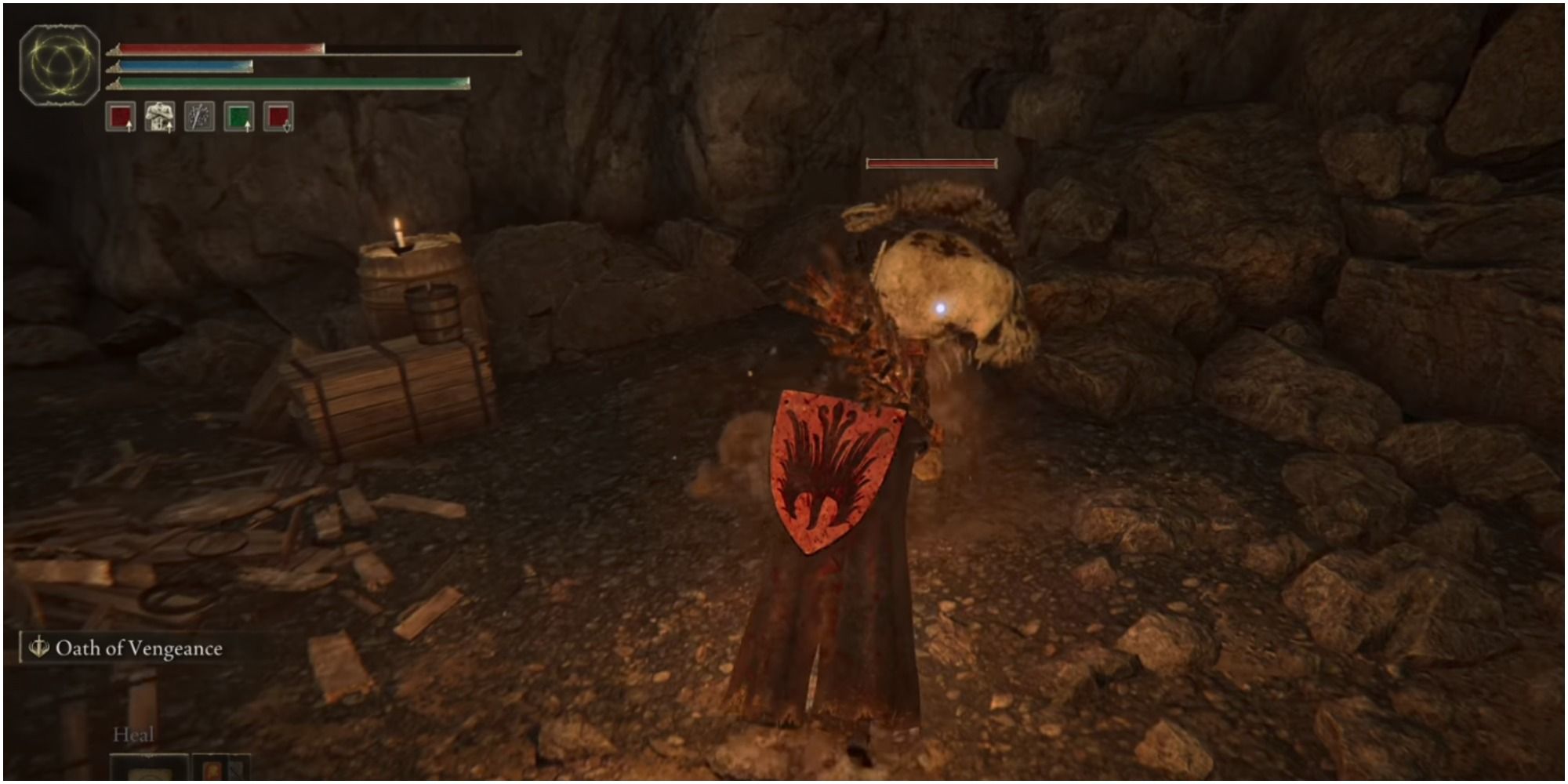 Garris' skeleton snail will perform a rolling attack and roll into you.

Counter: Immediately evade in the opposite direction, and don't forget to still keep an eye on Garris. 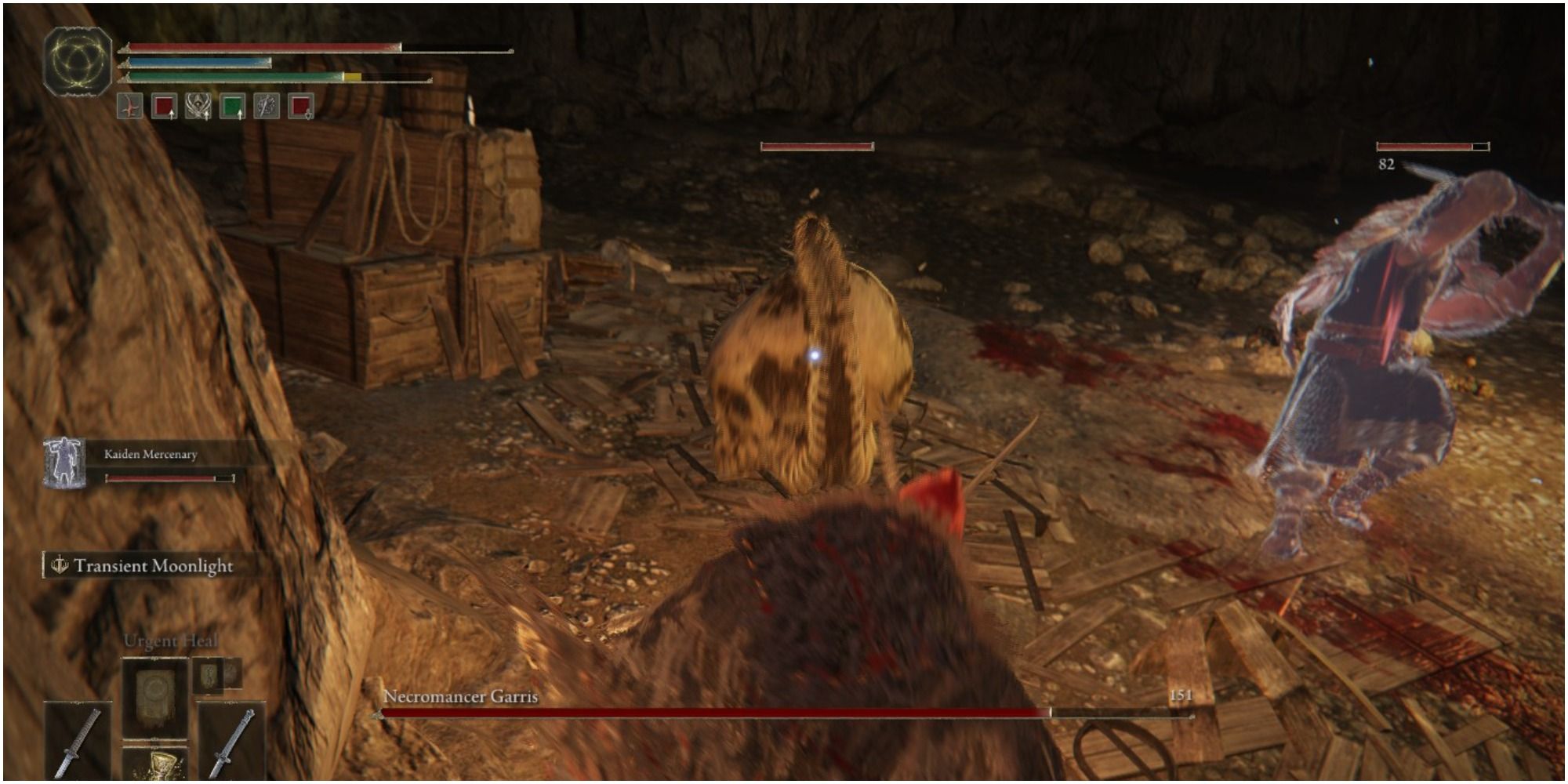 Aside from its rolling attack, the skeleton snail will also lean forward to bite. 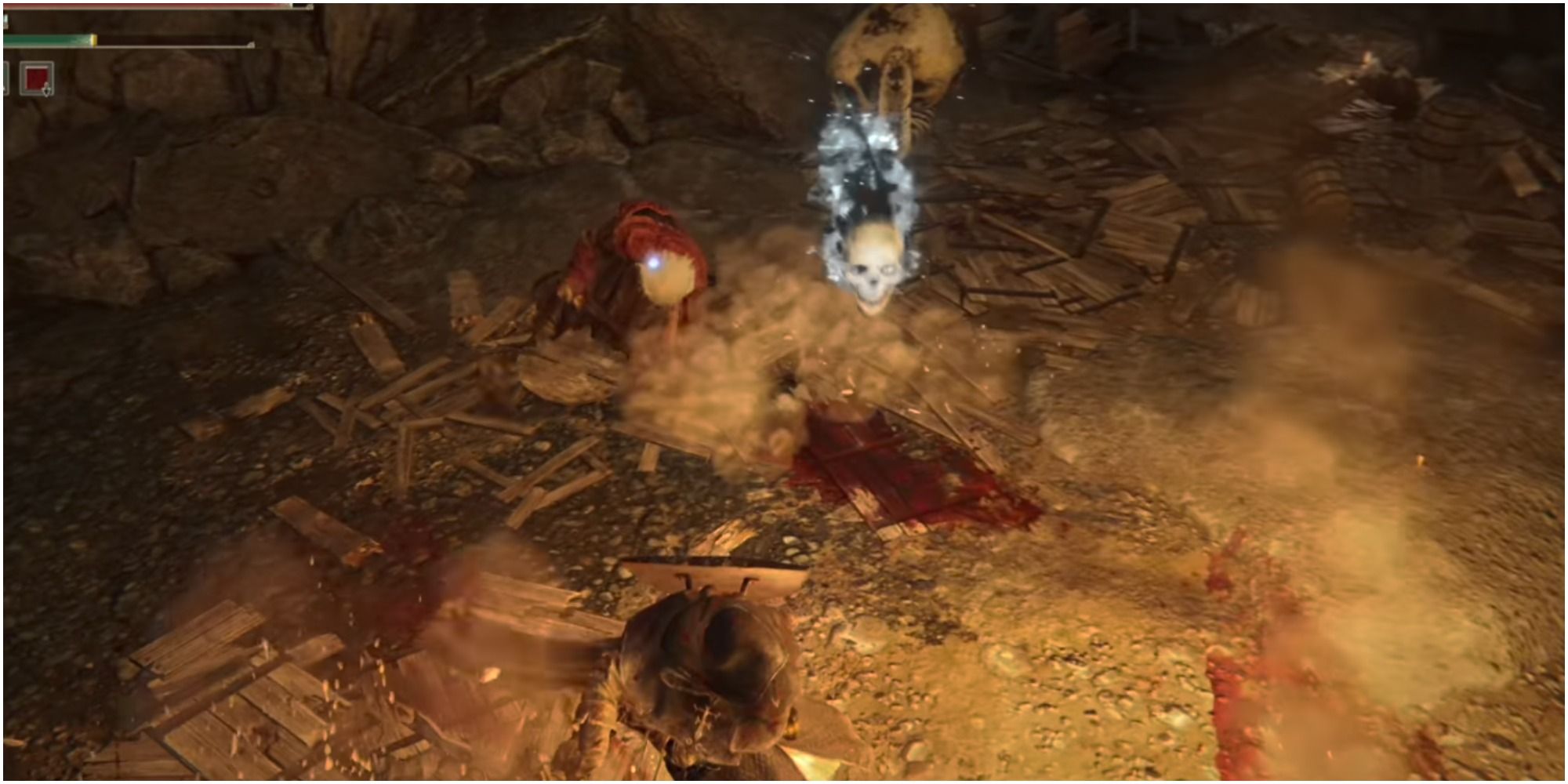 Garris isn't the only one who can inflict death magic attack, as the skeleton snail can occasionally unleash a single death magic skull projectile attack.

Counter: Roll into the opposite direction and still keep an eye out for Garris' attacks. 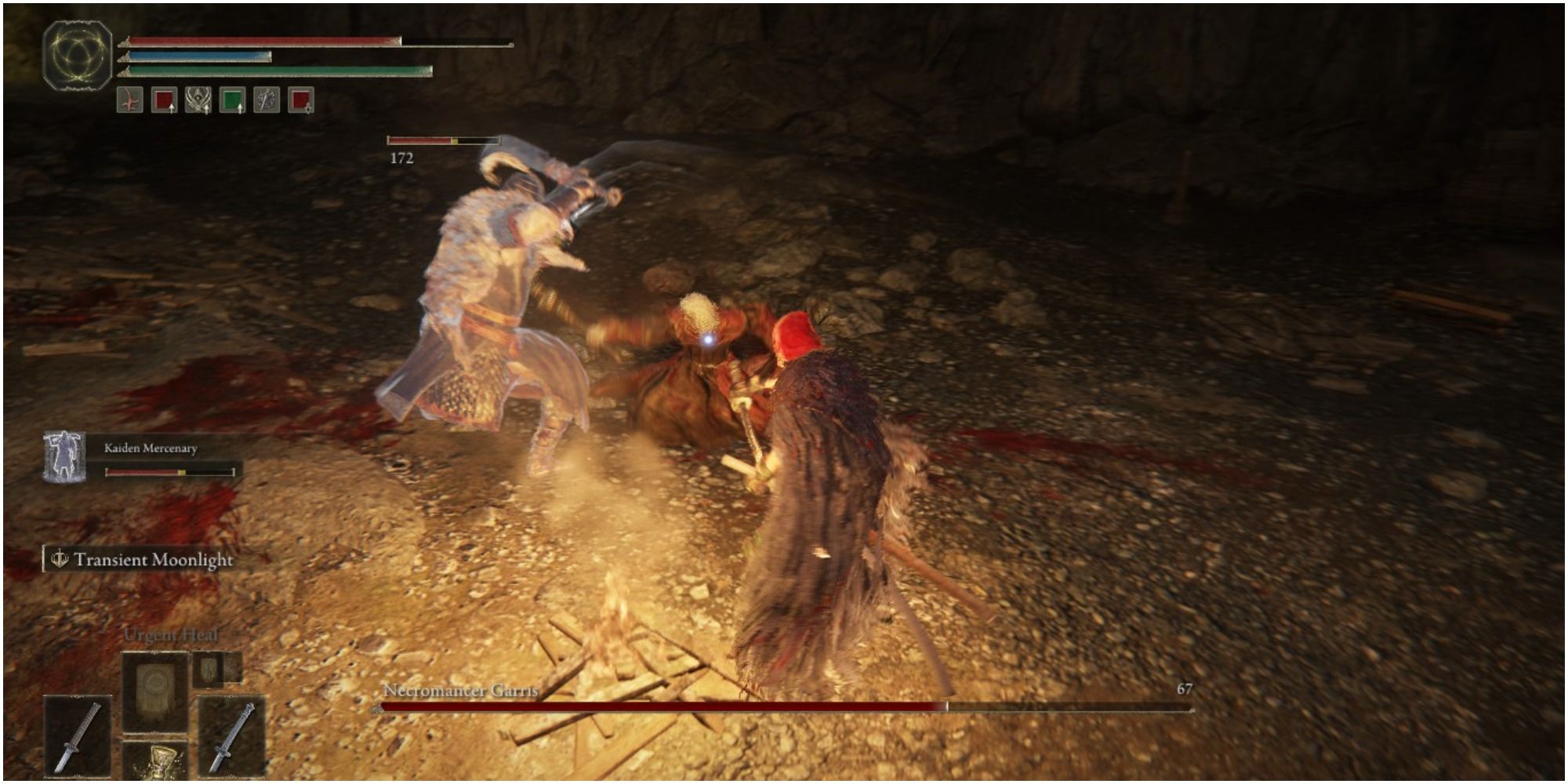 There are two different battle strategies that could help you defeat Garris and his army of skeleton snails. If you do not have a weapon that is sufficiently upgraded or levelled up your stats and Spirit Ashes, then you might get overwhelmed in this fight.

As mentioned before, melee builds may find heavy weapons with a Bleed effect does the job perfectly. As for caster builds, use sorceries or incantations that can inflict physical damage or fire damage. 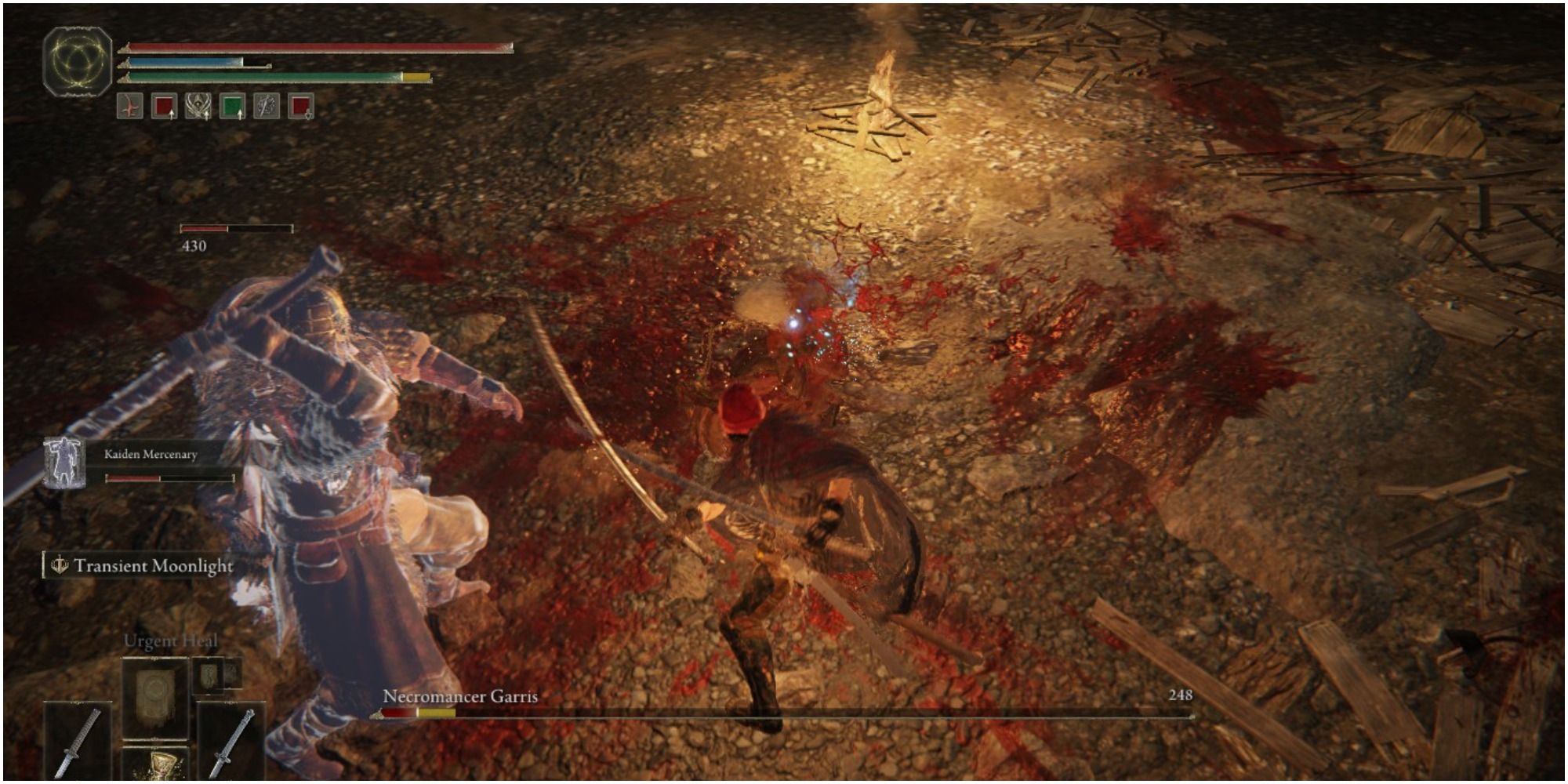 For melee strategy, arming yourself with heavy weapons like a greatsword is recommended, as Necromancer Garris is extremely easy to stagger as his defensive capabilities are very low. Since Garris has some support in the form of the skeleton snails he summons throughout the fight, it definitely won't hurt to summon Spirit Ashes like Lhutel the Headless or Kaiden Mercenary that have been upgraded to at least a +4 since they're quite tanky.

If your weapon does not have a passive Bleed effect, you can equip Ashes of War that deal Bleed damage, such as Seppuku or Bloody Slash. Moonveil Katana's Transient Moonlight skill is very efficient when dealing with Garris, so prepare an extra Cerulean Tear Flask to recharge. Also, using Opaline Bubbletear wouldn't hurt since you need to get close to inflict damage. 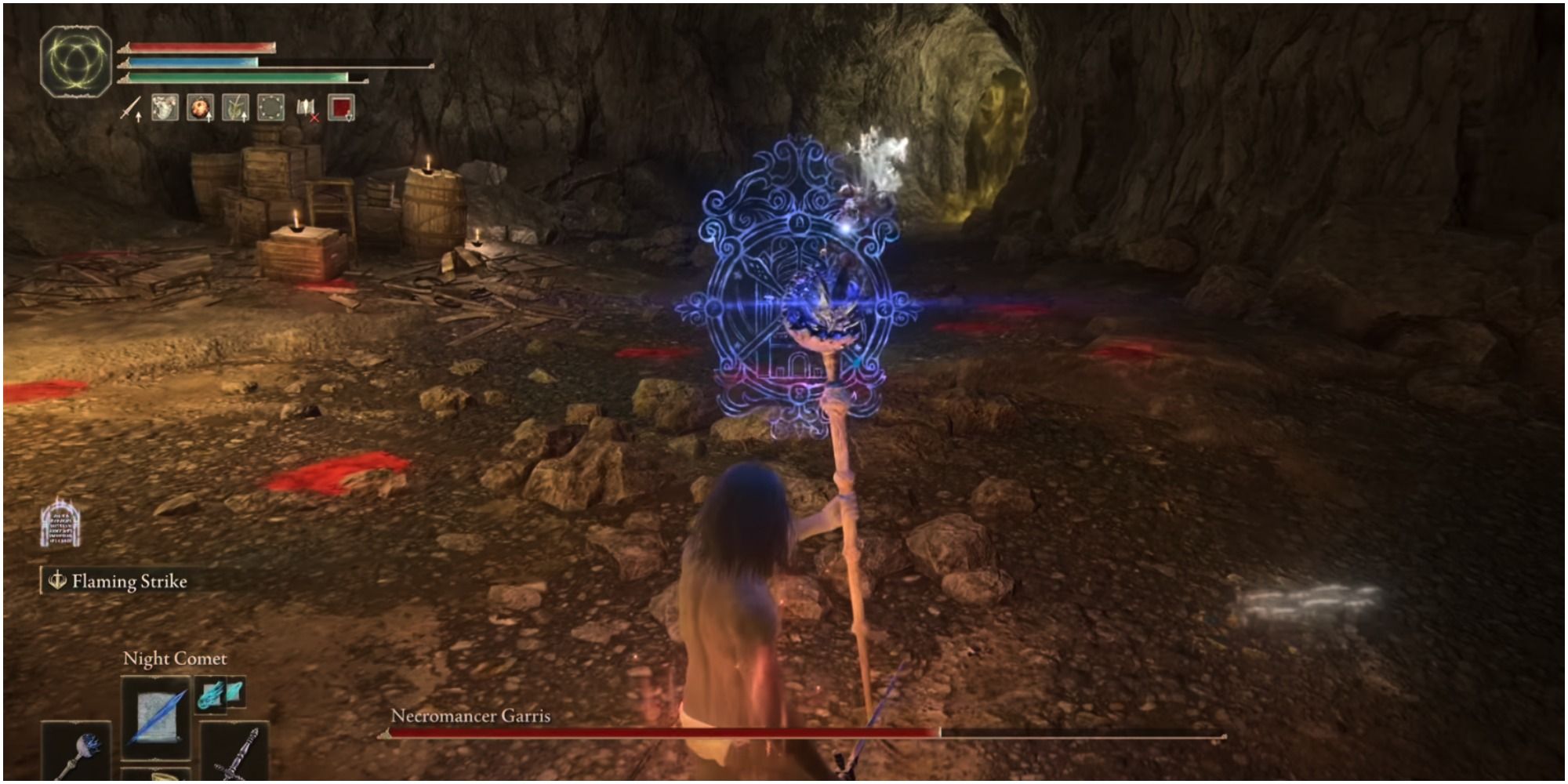 For ranged combatants, using any sorcery that deals physical damage is a plus. Also, fire-type spells are recommended if you lack the former. For instance, using sorceries such as Night Comet, Greater Glintstone Shard or Roiling Magma are recommended as they pack a real punch on Garris.

To prevent being overwhelmed, it is suggested to summon Spirit Ashes. You could use the same ones recommended for melee combatants – Lone Wolf Ashes would also work well.