Al Capone’s just met a girl named Maria. Problem is, he hasn’t met her lover yet.

Or potential problem, I should say. So far, Maria’s been a fine addition to our fledgling criminal empire. She’s handy (enough) with a gun, and we’re in no position to turn down the extra personnel. Her lover is out there though, and chances are he’s working for a rival crime boss. Hell, maybe he is a rival crime boss.

Whether leader or lackey, his shadow now stretches over our little enterprise. On that fateful day when he and Capone meet, be it in five minutes or hours from now, there’s no knowing how Maria will react. Will she refuse to fight? Betray us entirely? These are the scenarios that keep Capone up at night—and me, by extension.

As the song says, “If you’re looking for salvation, well you know you ain’t gonna find it in the Empire of Sin.”

Empire of Sin was a pleasant surprise. We rarely get many of those at E3, and even fewer at E3 2019. With new consoles hardware about a year and a half away, we’re in a bit of a lull. But going into my Empire of Sin demo, all I knew was that Romero Games and Paradox had teamed up for a new strategy game. Half an hour later, I emerged excited. So much so I feel almost obligated to write it up.

Helmed by Brenda Romero, Empire of Sin is a strategy game set in Prohibition-era Chicago. You play as one of the city’s myriad crime bosses—Capone, in our demo—trying first to take over a single racket, then rule a neighborhood, and then blanket the entire city with your ill-gotten empire.

It’s clever on so many different levels. For one, Empire of Sin blends real-time and turn-based action, similar to our 2018 Game of the Year nominee Mutant Year Zero: Road to Eden. Combat is turn-based. Everything else is real-time.

This allows for tactical depth in combat, and indeed Empire of Sin looks solid on that front, albeit familiar to anyone who’s played XCOM or Mutant Year Zero and so forth. There’s a lot of 1920s mob flavor, with Capone, for instance, boasting the ability to spray his Tommy Gun back and forth across multiple targets. 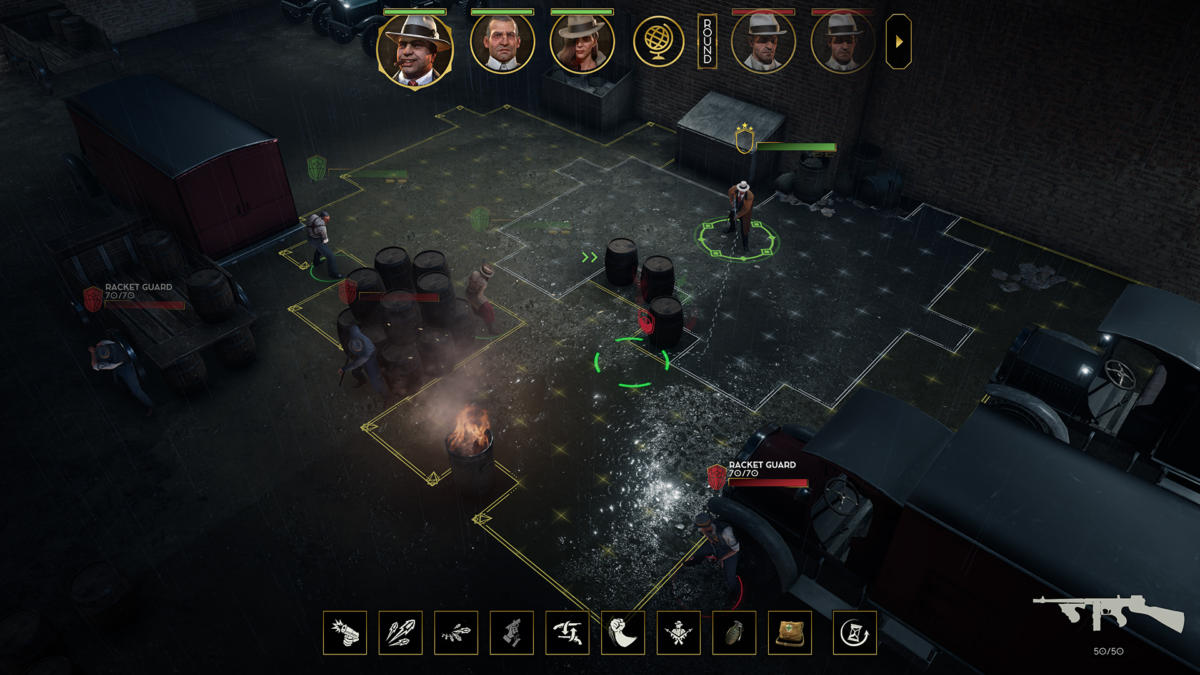 But real-time exploration allows for some neat tricks on the macro level. The way I understand it, every faction is moving around the map in real-time. This opens up myriad possibilities. Two rival gangs might meet in the street and immediately plunge into combat, for instance. Or you might take a taxi past the same ambush and attack behind enemy lines.

You can also split your gang up while exploring. Say your nearest rival has three different rackets nearby—a casino, a bar, and (most importantly) a brewery to supply the other two with alcohol. You could position your gang outside all three, hitting their operation all at once. Or you could hit one, wait for your rival to rush over reinforcements, then hit the two left unprotected.

Time becomes an even greater factor later in the game, though this fell somewhat outside the scope of our demo. Developer Ian O’Neill did zoom out the map, though, allowing me to see that the neighborhood we spent the whole demo warring over is just one of many in Chicago, all playing out simultaneously. Thus as your empire expands, you’ll need to partition out some members of your gang for each neighborhood you control—or else hope the cab rides between neighborhoods don’t take so long you lose it all. 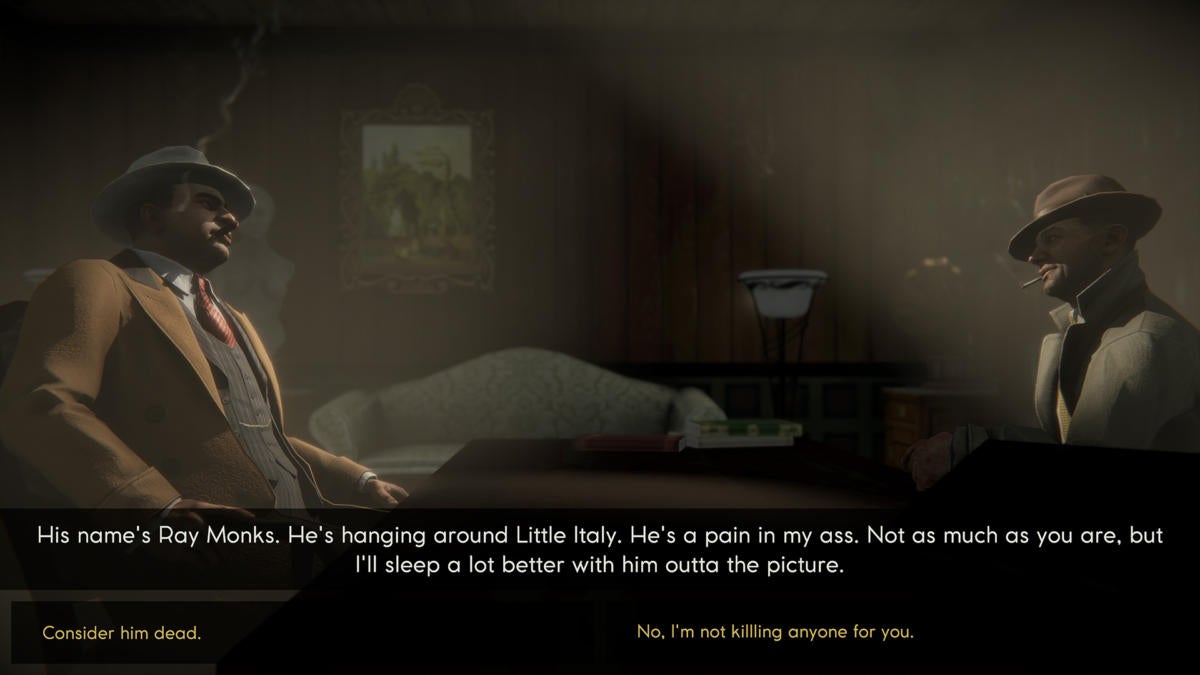 Your actual gang members are by far the most interesting aspect of Empire of Sin though. O’Neill and John Romero (who sat in on our presentation) referred to them as “Recruitable Playable Characters,” or RPCs. The terminology isn’t especially important, as it essentially boils down to building a party in Baldur’s Gate or what have you.

But your recruits all have a level of interpersonal intrigue that’s rare in strategy games—or used to be rare. I feel like it’s becoming a trend lately, with first Crusader Kings II and recently Total War: Three Kingdoms adopting similar ideas.

Regardless, I’m a fan. It adds a human element to what’s traditionally a clockwork genre, and creates compelling story hooks in the process. Using the example from the start of this article, Capone recruits Maria. Then, taking a look at Maria’s character sheet, we notice Maria has a lover. Since her lover doesn’t work for us, we can assume he works for a rival gang—and that one day Maria might need to choose between him or us. That’s enough to fuel an entire story arc (as evidenced by West Side Story’s existence). 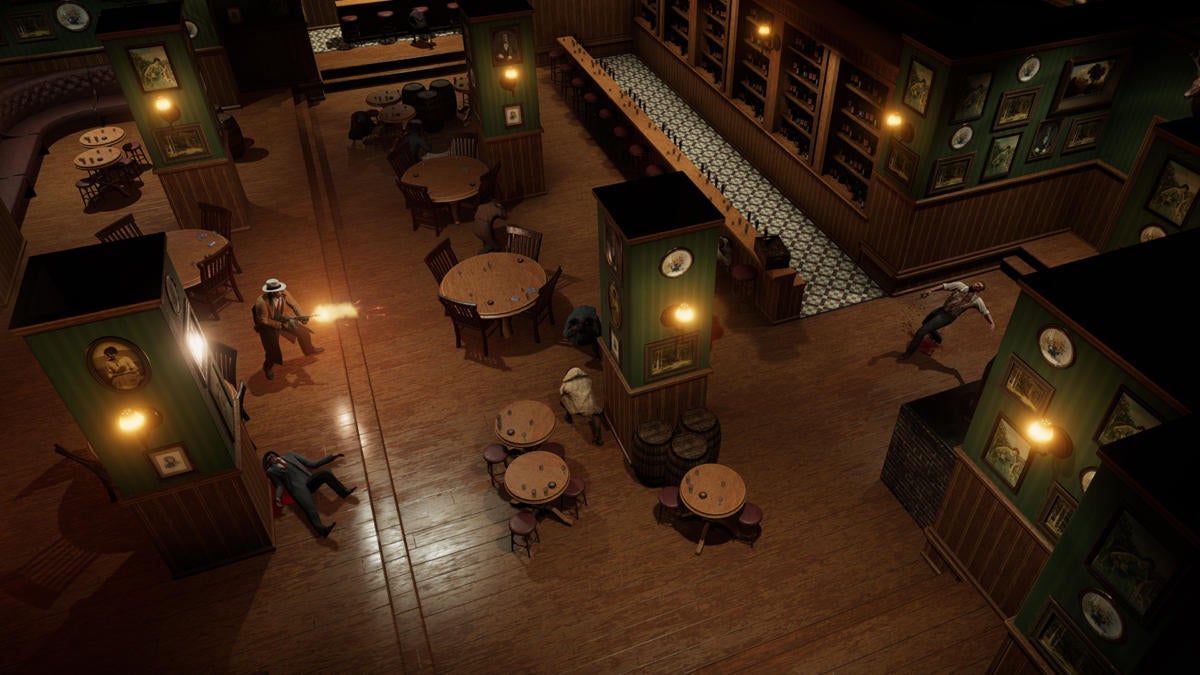 Of course as I noted with Watch Dogs Legion, the real test will be playing Empire of Sin two, three, or a hundred times through. Experience has taught me that this type of procedural randomness demos well, but is trickier to execute on long-term. As I noted covering Watch Dogs, humans are fantastic at pattern recognition. If every wannabe mobster in Empire of Sin has a lover and if every one of those encounters plays out the same, then all you’ve done is introduce a rule for the player to circumvent, not a compelling story engine.

It does demo great though, and I have high hopes for Empire of Sin. Total War: Three Kingdoms managed to surprise me with the amount of unique and nuanced relationships that are possible between its various feuding warlords. If Empire of Sin has even a fraction of that depth, I think it’ll be a fascinating experiment.

And an experiment built upon what looks like a highly competent strategy game, no less. I’ve still got questions, particularly regarding the late-game and whether it’ll end up feeling heavy on micromanagement. There are a lot of moving parts, and trying to keep track of over a dozen gang members in real-time seems daunting.

Empire of Sin feels fresh. If nothing else, it’s an ambitious idea in a genre that’s often prone to stagnation—though perhaps one that’s going through a renaissance at the moment, given I’ve seen more interesting strategy games this past year than the five years preceding. Now to find the time to play them, especially since Empire of Sin is due to release in that same “Spring 2020” window as…well, pretty much every other game we saw at E3 2019.