Atomicrops is an action roguelite farming simulator that arms you with a pea shooter, a watering can, and enormous radioactive crops that need your protection. It’s a nuclear apocalypse, and it’s up to you to keep the survivors, and mutants, alive. You’ll have to hunt down seeds to feed your town, free helpful farm animals from enemy camps, fend off mutagenic beasts, and defend your farm every night from wave after wave of hungry critters who want to gobble up your crops.

You'll have a team of dystopian farmers to choose from, but who is best suited for the job? In truth, it will depend on your preferred playstyle, but here are some tips to help you navigate the character selection in Atomicrops and choose one farmer to rule the wasteland. 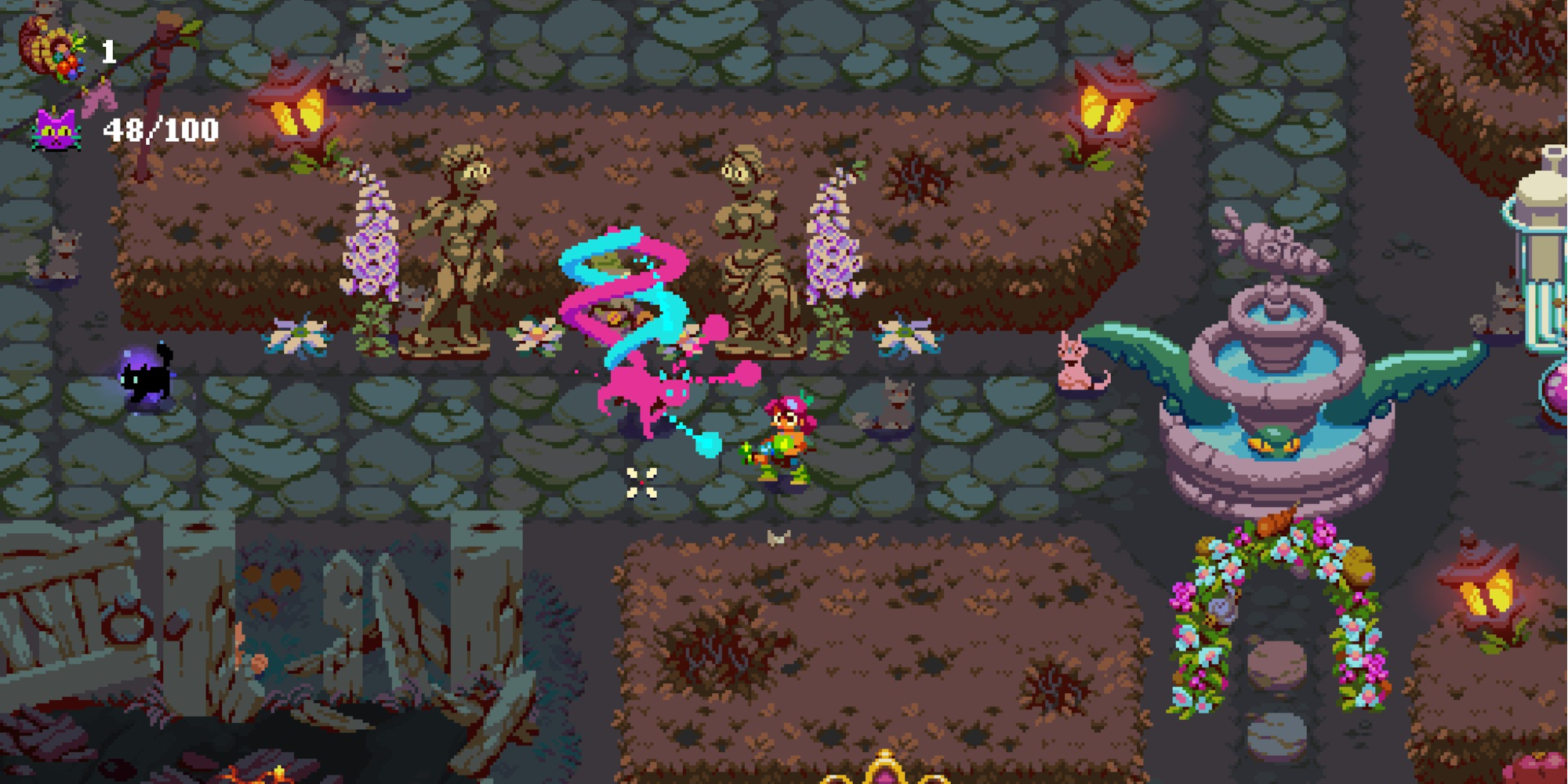 Lavender has become a reliable go-to character in the main game, despite being the starter. Her custom item – Pollination – comes with not one but two perks. She starts the game with two bees, which will double the growth rate of any crop they interact with. In addition to the bees, Pollination also provides a 20 percent growth rate boost to all crops.

This means while playing as Lavender, all crops will only take 80 percent of the standard growth time to become harvestable before accounting for the bees. You’ll be able to grow more crops and collect more cashews immediately, which means bigger and better weapons right out of the gate, more bonuses from the merchant, and faster bridge upgrades. 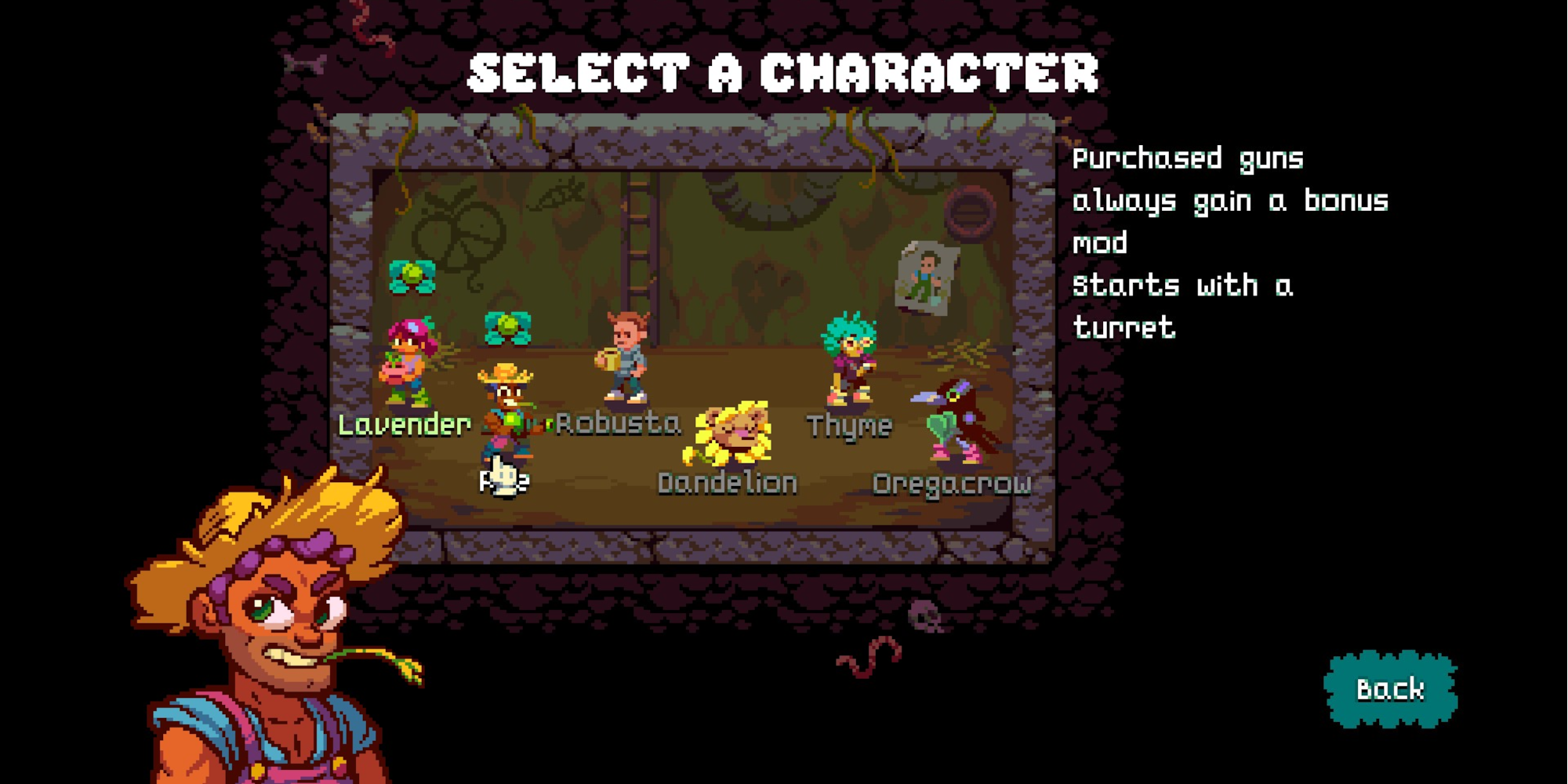 Even after being nerfed, Rye is still one of the most reliable characters throughout the game, regardless of which year you’re playing in. Previously, Rye had a 50 percent chance to repair his gun and keep it the next day. However, your weapons no longer break at the end of the day, and instead of upgrading your current weapon, all purchased guns come with a certain number of random upgrades.

Rye’s new ability is that every gun purchased comes with a bonus mod. This can be especially useful early on, when guns may not come with any helpful mods at all. In addition to his Mechanic starting item, he also comes with a turret for your farm. You can unlock Rye by beating a Summer boss. 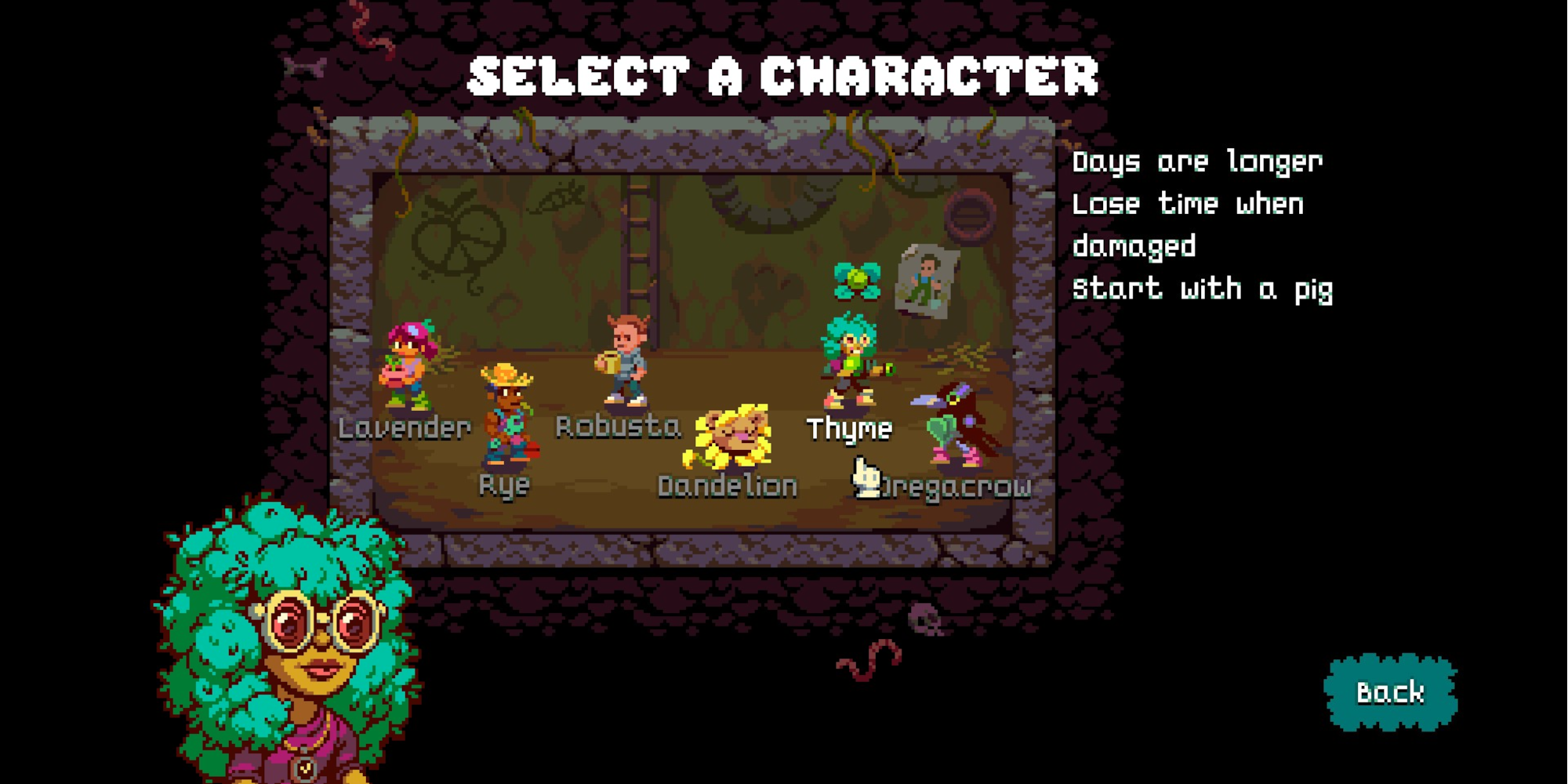 Thyme, unlocked by beating Year Four, is Atomicrops’ “risk/reward” character. She comes with a pig and her starting item Thymepiece, which increases day length by 50 percent. However, taking damage cuts 20 seconds off the current time. This means that as long as you can limit the amount of damage you take each day, you will have more time to explore, raid camps, and farm.

The pros of this playstyle are obvious, but the cons become increasingly difficult to avoid as you progress through the game. You always run the risk of taking so much damage that you actually shorten your day length. If you’re an achievement hunter, though, you’ll find Thyme very helpful in unlocking certain achievements, such as 1337, which you get by killing six Elite enemies in a single day without taking damage. 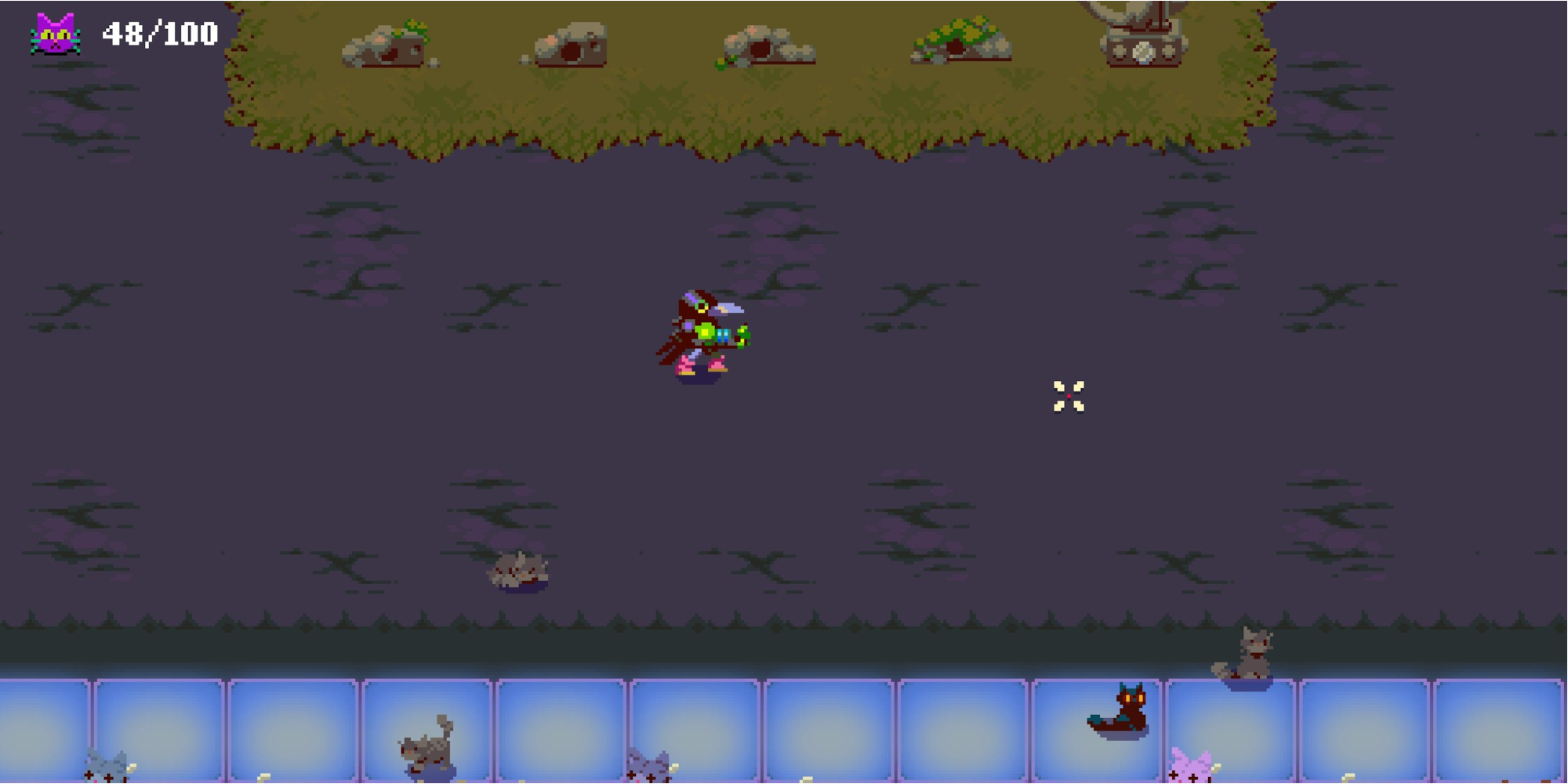 The newest character, you can unlock Oregacrow by purchasing the “Reap What You Crow” DLC. They have a lot of upsides, all associated with their unique Cauldron system. Like Thyme and Robusta, there are a lot of risks associated with playing as Oregacrow, namely that the number of crops you can grow is extremely limited. Without special items and upgrades, the only seeds you can pick up are corn and roses, thanks to this character’s starting item: Crow Eyes.

The biggest obstacle is Oregacrow’s health, which you’ll immediately notice is replaced by oregano, the highest tier seed available to this character. However, unlike the heart seeds, growing oregano will not replenish your health. Instead, it will fill Oregacrow’s cauldron. To heal, you will have to unlock heal perks from the cauldron or by purchasing certain gun upgrades. However, you’ll also have access to powerful relics unique to this character (like slowing down time in certain regions of the map). 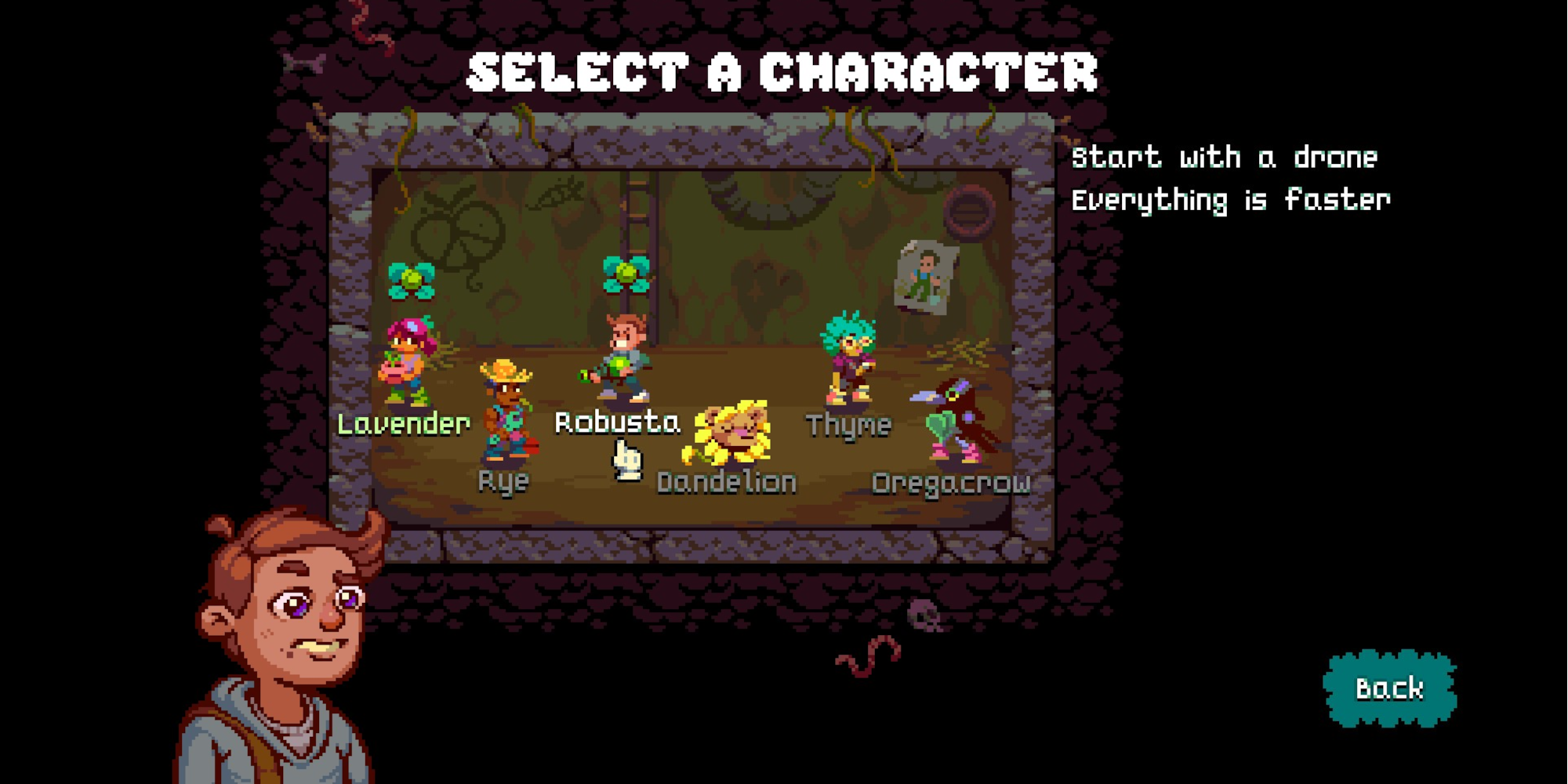 Robusta is the ultimate challenge character. His only upside is that he begins the game with a drone, which will help you clear camps and defend their crops. His starting item, Coffee Addict, increases the game’s speed by 25 percent. This will affect the speed of everything in the game, including player speed, bullets, crop growth, etc.

This character is for those who are seeking more challenging gameplay, as there are really no upsides to playing as Robusta. Especially in the later years, your reaction time may not be fast enough to keep up with Coffee Addict’s increased speed. For completionists, however, you’ll have to play as Robusta to get all the achievements. Retromation’s Hoodie can only be obtained by beating Year Ten with Robusta. Getting this achievement will also unlock the only alternative player skin in Atomicrops. You can unlock Robusta by beating Year Two. 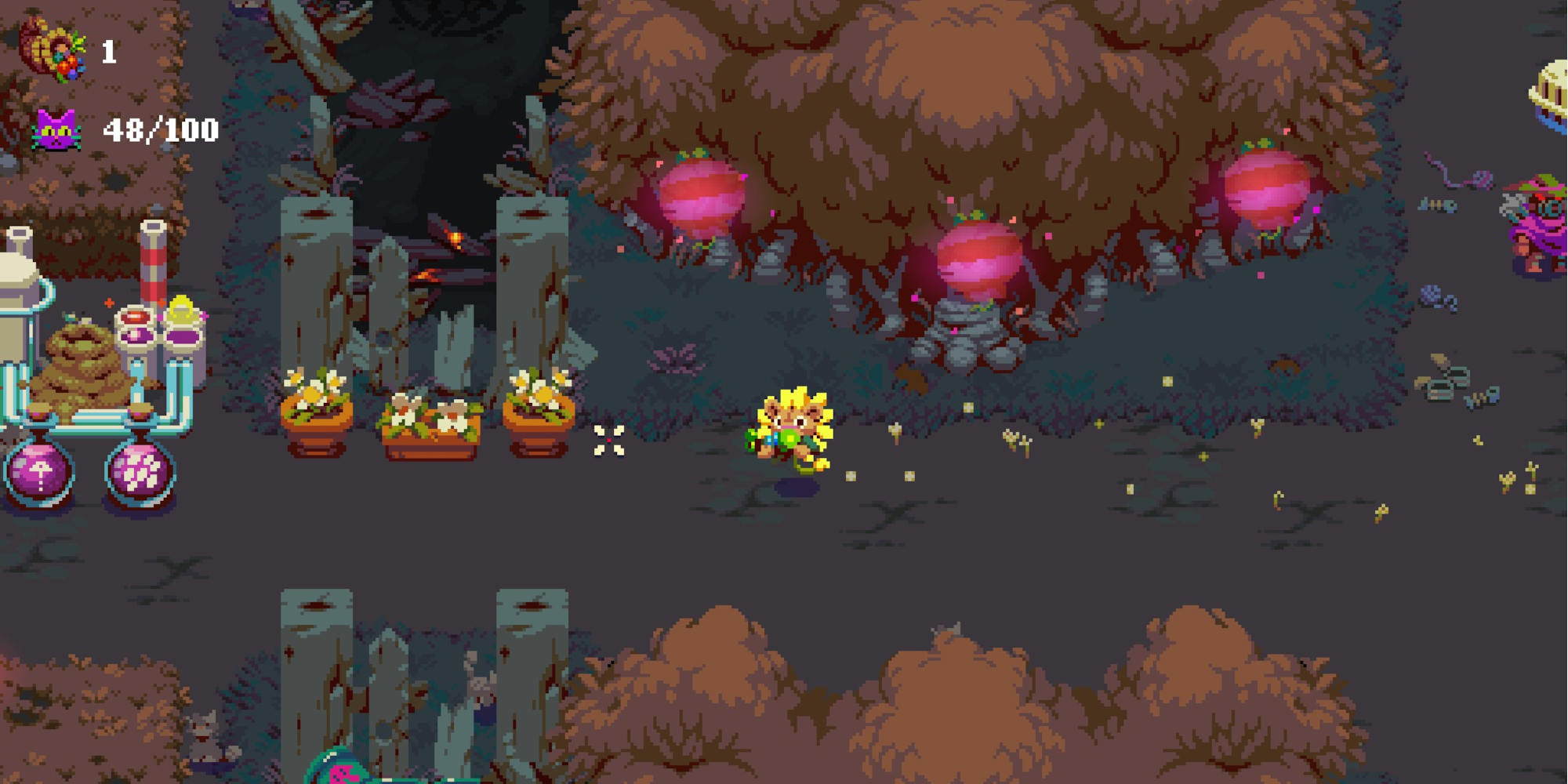 Arguably the most unique (and potentially fraught) character in Atomicrops, Dandelion presents several challenges which begin even before he is unlocked. Unlike the other characters, Dandelion can’t be unlocked by achieving a certain goal, like beating a year or a boss. Instead, he must be rescued from a giant pod camp that only appears in Tier three or four biomes.

Dandelion comes with more starting perks than any other character: Duck Wings, Cleats, and Crampons, meaning he will never have to till soil, pull weeds, or buy bridge upgrades. However, his unique movement physics makes him extremely difficult to play. He cannot quickly change directions, and his acceleration and deceleration are both very slow. Dandelion has unique collectibles called Dandelion Puffs, which help control his movement for a time, but he still presents an enormous challenge, especially in combat. Simple actions like dodging bullets become monumental challenges for Dandelion.