It’s the end of Magic: The Gathering’s Commander Legends: Battle for Baldur’s Gate’s preview season, which means it’s time for the preconstructed Commander decks to have their big debut. We’ve already seen the red/green Draconic Dissent deck, and its huge amount of goad, but now it’s time to go for something a bit more horrific.

Mind Flayarrrs is a deceptively silly name for an absolute beast of a deck. Horror tribal is the name here, and trying to mill your opponents out to steal the best cards from their graveyard is the game. With lots of support for Horrors and mill on offer, this is one any Dimir (blue/black) lover is going to want to pick up. 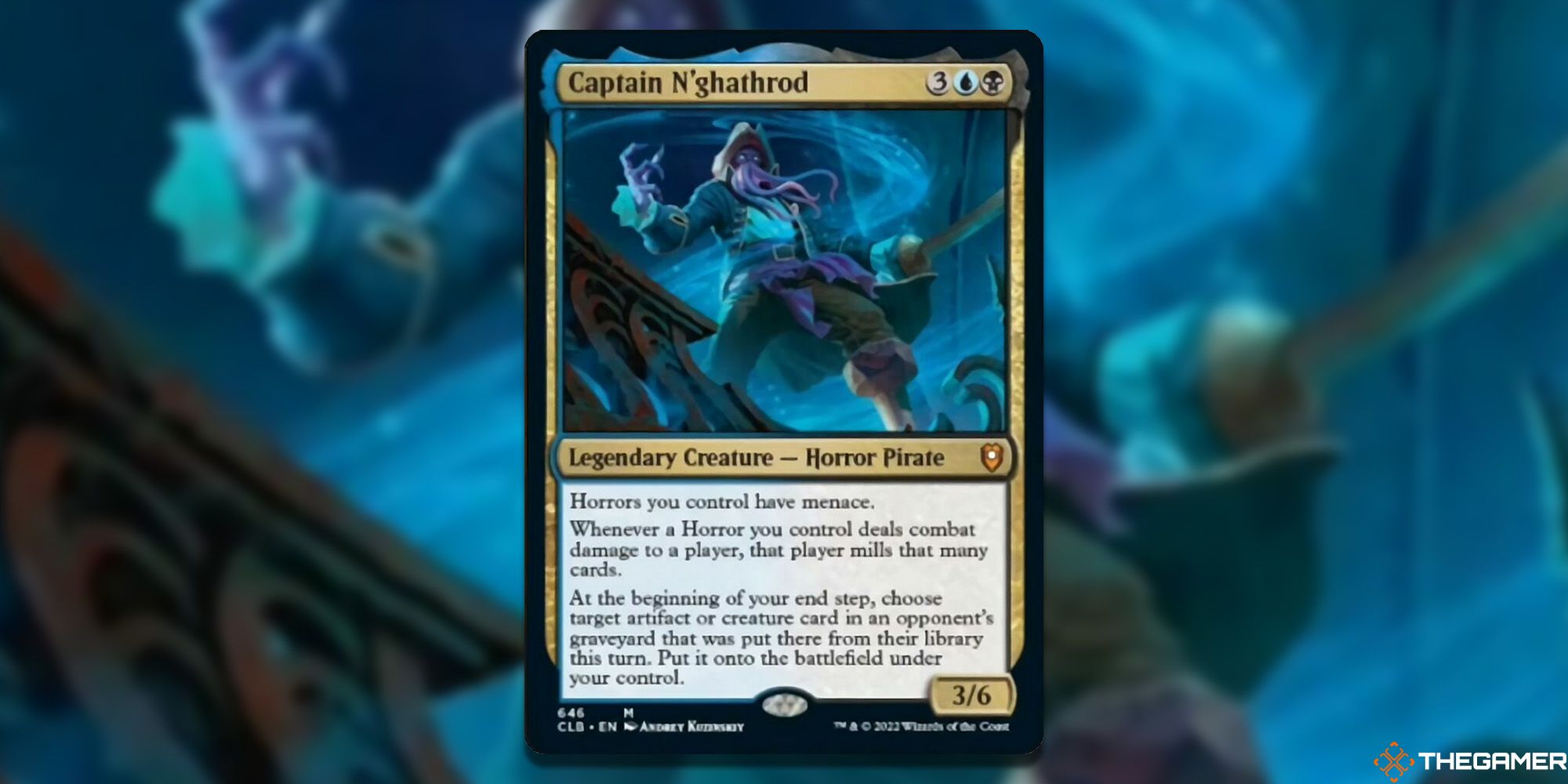 Horrors you control have menace.

Whenever a Horror you control deals combat damage to a player, that player mills that many cards.

At the beginning of your end step, choose target artifact or creature card in an opponent’s graveyard that was put there from their library this turn. Put it onto the battlefield under your control.

It’s hard not to feel sorry for Innistrad: Crimson Vow’s Umbris, Fear Manifest. It was only the go-to Horror tribal commander for a few sets, before Captain N’ghathrod came along and offered something much more appealing.

For the same price as Umbris, you get a commander who can mill your opponents for an immense amount of cards, before stealing one and putting it onto the battlefield under your control. For all but the most dedicated of graveyard decks, the theft makes up for N’ghathrod’s lack of exile, and for everything else, there’s nothing saying you can’t run Umbris in the 99. 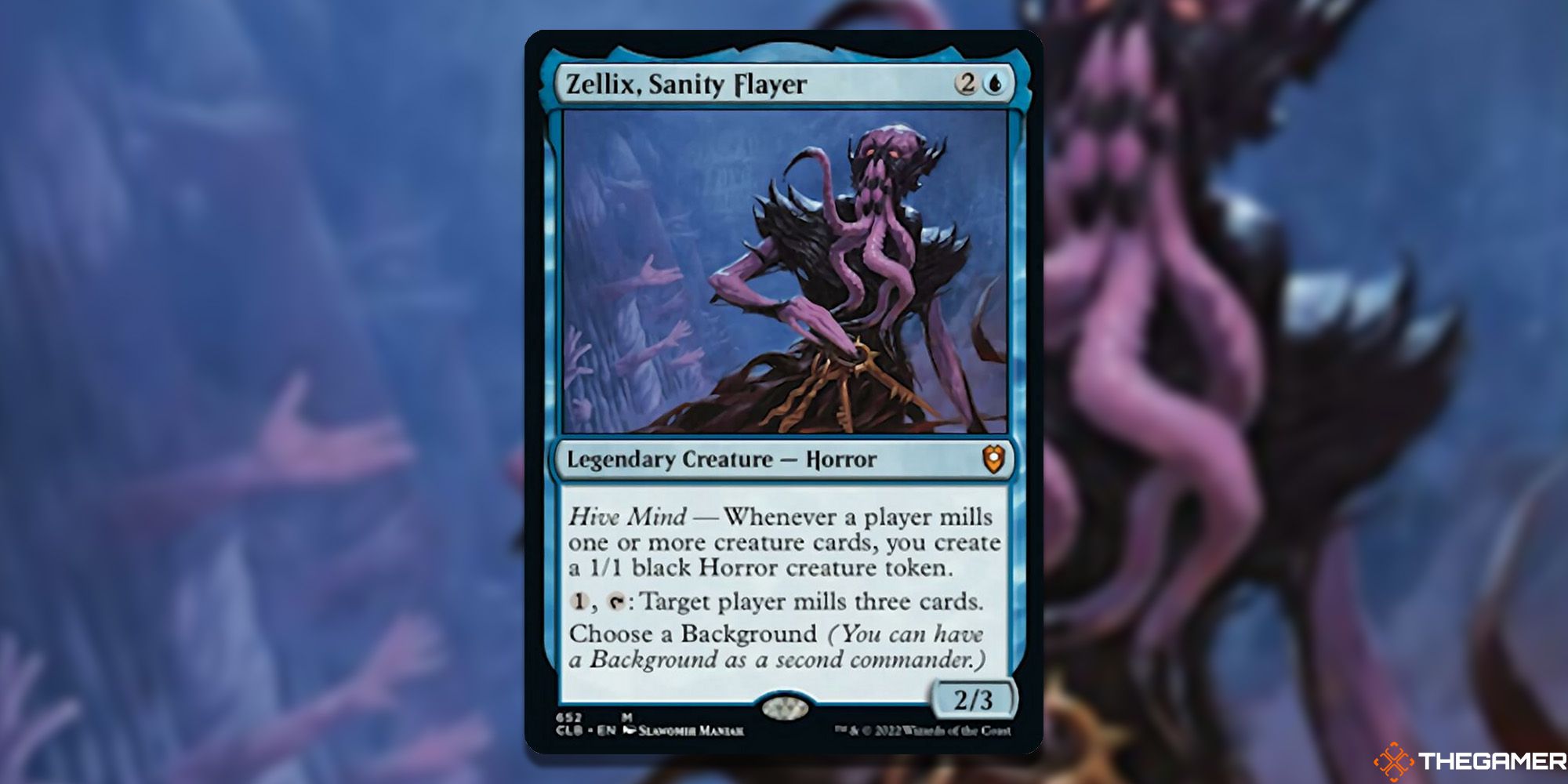 Hive Mind – Whenever a player mills one or more cards, you create a 1/1 black Horror creature token.

On its own, Zellix isn’t great. Producing one Horror whenever your opponent mills is rather slow, and having to tap Zellix for the ability means you only usually get to use it once per turn. This is definitely a Commander designed around its partnered Background, which helps take it from a fairly rubbish commander into a slightly-less-rubbish-but-still-not-N’ghathrod tribal tool. 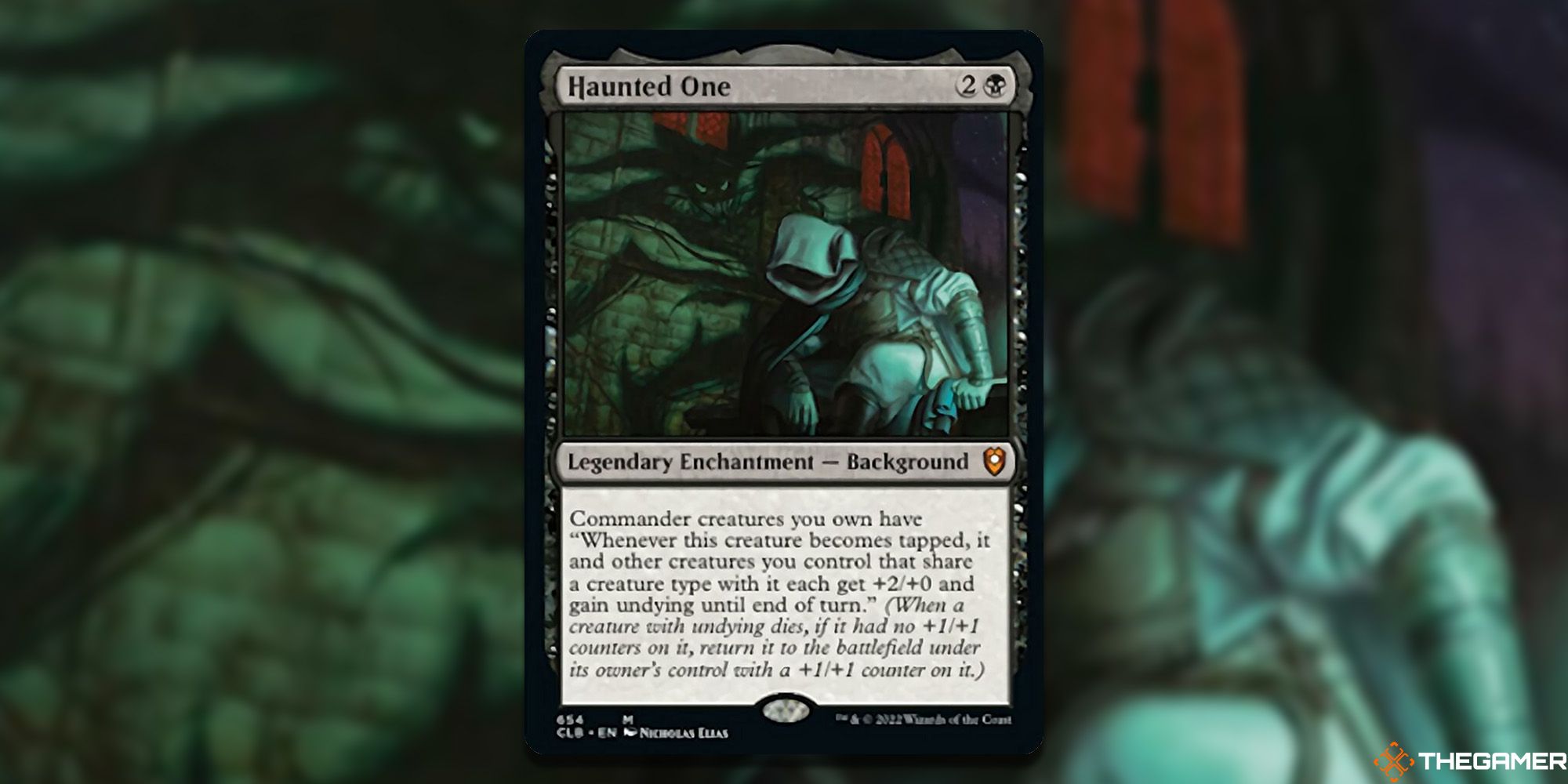 Commander creatures you own have “Whenever this creature becomes tapped, it and other creatures you control that share a creature type with it get +2/+0 and gain undying until the end of turn”.

This is an excellent Background enchantment for all kinds of black tribal decks, as it works as a quick and nasty buff to all your creatures just by tapping down one. More importantly, it also gives them undying, which can protect them from board wipes and removal by pulling them back from the graveyard and giving them a +1/+1 counter.

The weird thing about Zellix and Haunted one is that undying doesn’t protect the tokens Zellix makes. Tokens exile as soon as they hit the graveyard, so they can’t come back with undying. It’s a weird synergistic miss that ensures Zellix is nowhere near as powerful a secondary commander as Draconic Dissent’s Baeloth. 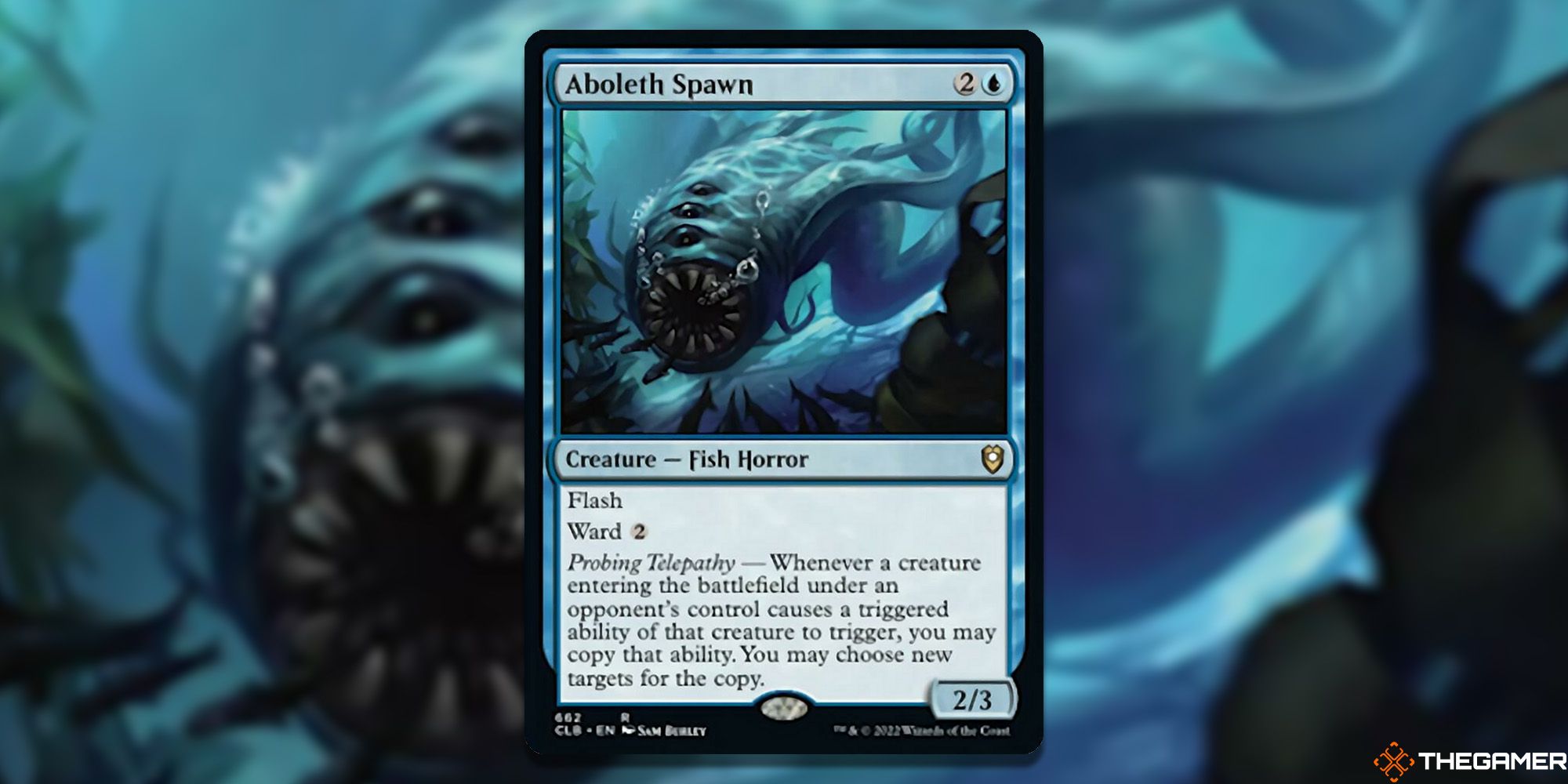 Probing Telepathy – Whenever a creature entering the battlefield under an opponent’s control causes a triggered ability of that creature to trigger, you may copy that ability. You may choose new targets for the copy.

Copying a creature’s enter-the-battlefield trigger is something we’ve not seen much of before, but its potential is sky-high. Copying anything from a humble Solemn Simulacrum to something spicier like an Avenger of Zendikar or Terastodon is ridiculously powerful, and could make Aboleth Spawn a potential new staple for the format. Throw in flash to allow you to play it at instant speed and this is a fantastic counter to blink decks, which try to stack up the triggers and crush the opponent under the sheer critical mass of them.

Keep in mind that this only copies a creature’s own enter-the-battlefield trigger. Anything that triggers when another creature enters, such as alliance, won’t be copied because it wasn’t a triggered ability of “that” creature. It’s an awkwardly worded card, but all the most powerful ones are. 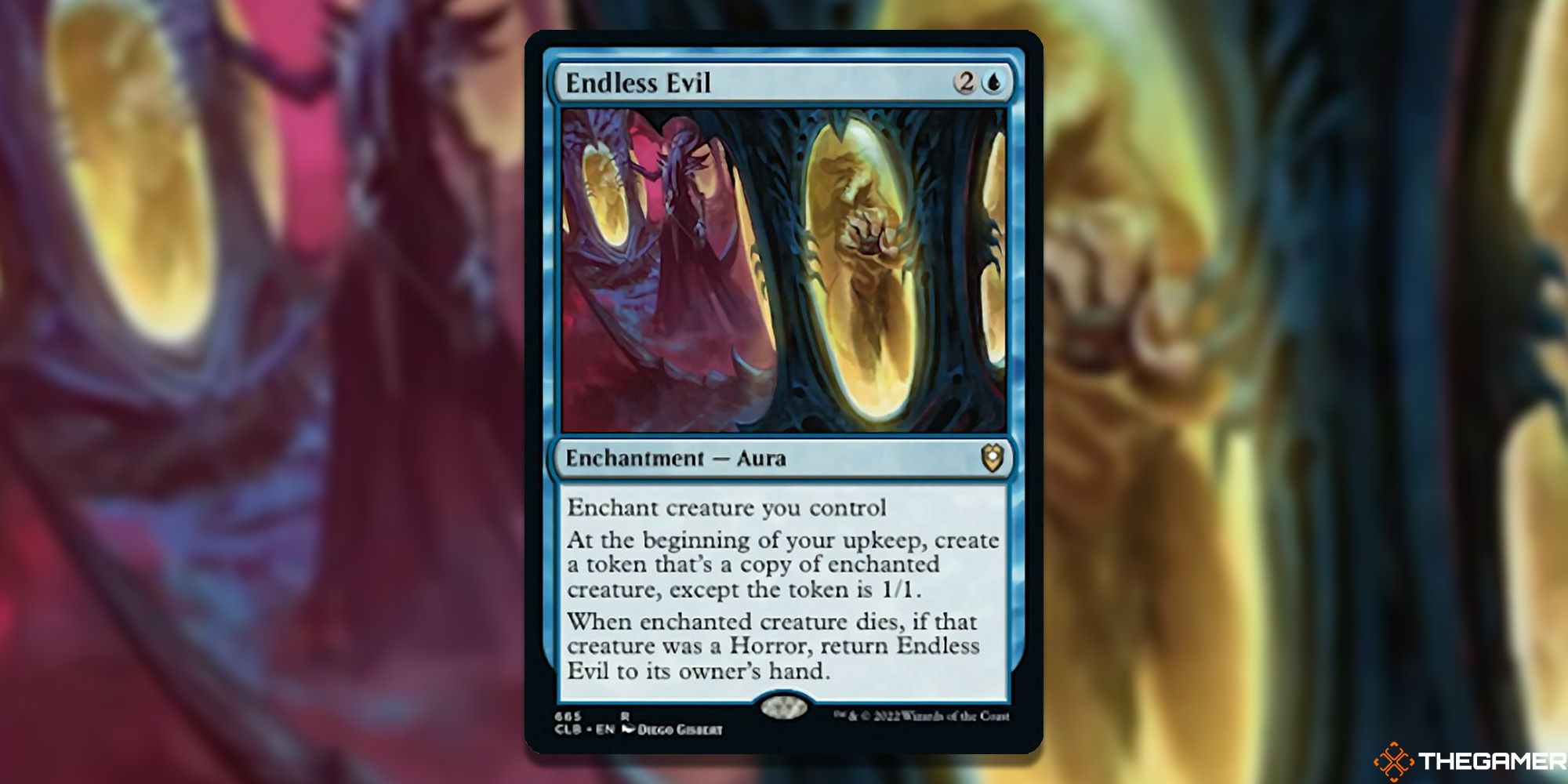 At the beginning of your upkeep, create a token that’s a copy of enchanted creature, except the token is 1/1.

When enchanted creature dies, if that creature was a Horror, return Endless Evil to its owner’s hand.

For a Horror tribal deck, very few things could be scarier than an Endless Evil. Every turn, you can make a copy of the game’s strongest Horrors, like Hullbreaker Horror, Chasm Skulker, Plague Stinger, or Phyrexian Obliterator – one is bad, a dozen you can clone with populate is just evil.

It’s also incredibly hard to get rid of. Usually when you kill a creature, any enchantments on it go to the graveyard alongside it. As long as you’re playing Horrors, Endless Evil will keep returning to make more tokens of anything you want. 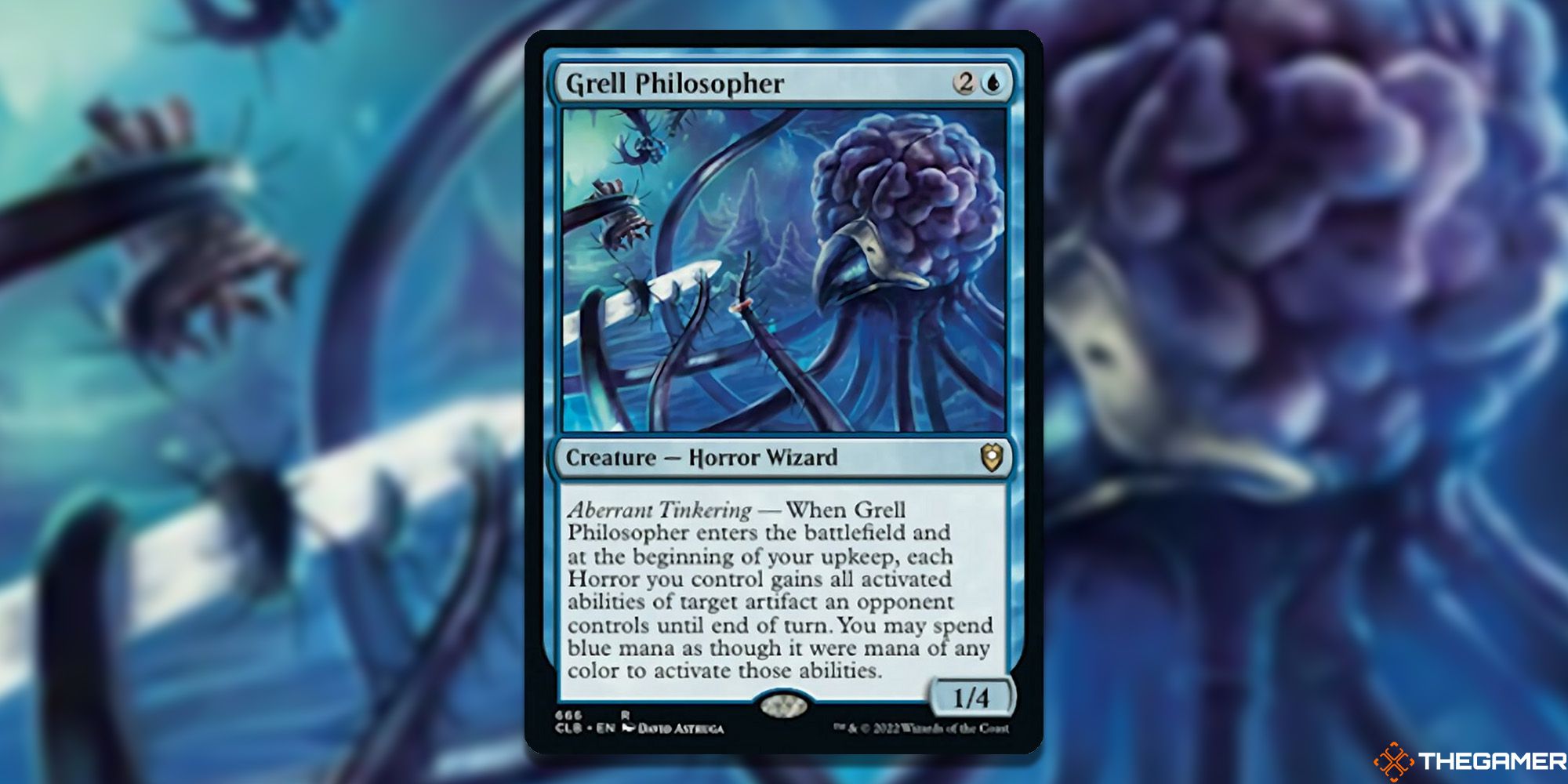 Aberrant Tinkering – When Grell Philosopher enters the battlefield and at the beginning of your upkeep, each Horror you control gains all activated abilities of target artifact an opponent controls until end of turn. You may spend blue mana as though it were mana of any colour to activate those abilities.

Grell Philosopher is a highly situational card. In most cases, it seems like its only purpose is to copy the abilities of mana rocks, which are the most common artifacts with activated abilities played in the format. Even then, having a dozen Sol Rings does allow for some serious ramp.

The biggest downside to Grell Philosopher is that it doesn’t copy anything other than the activated abilities. Turning all your Horrors into a Crucible of Worlds, Academy Manufactor or Door of Destinies would be pointless, as they use static or triggered abilities to function instead. 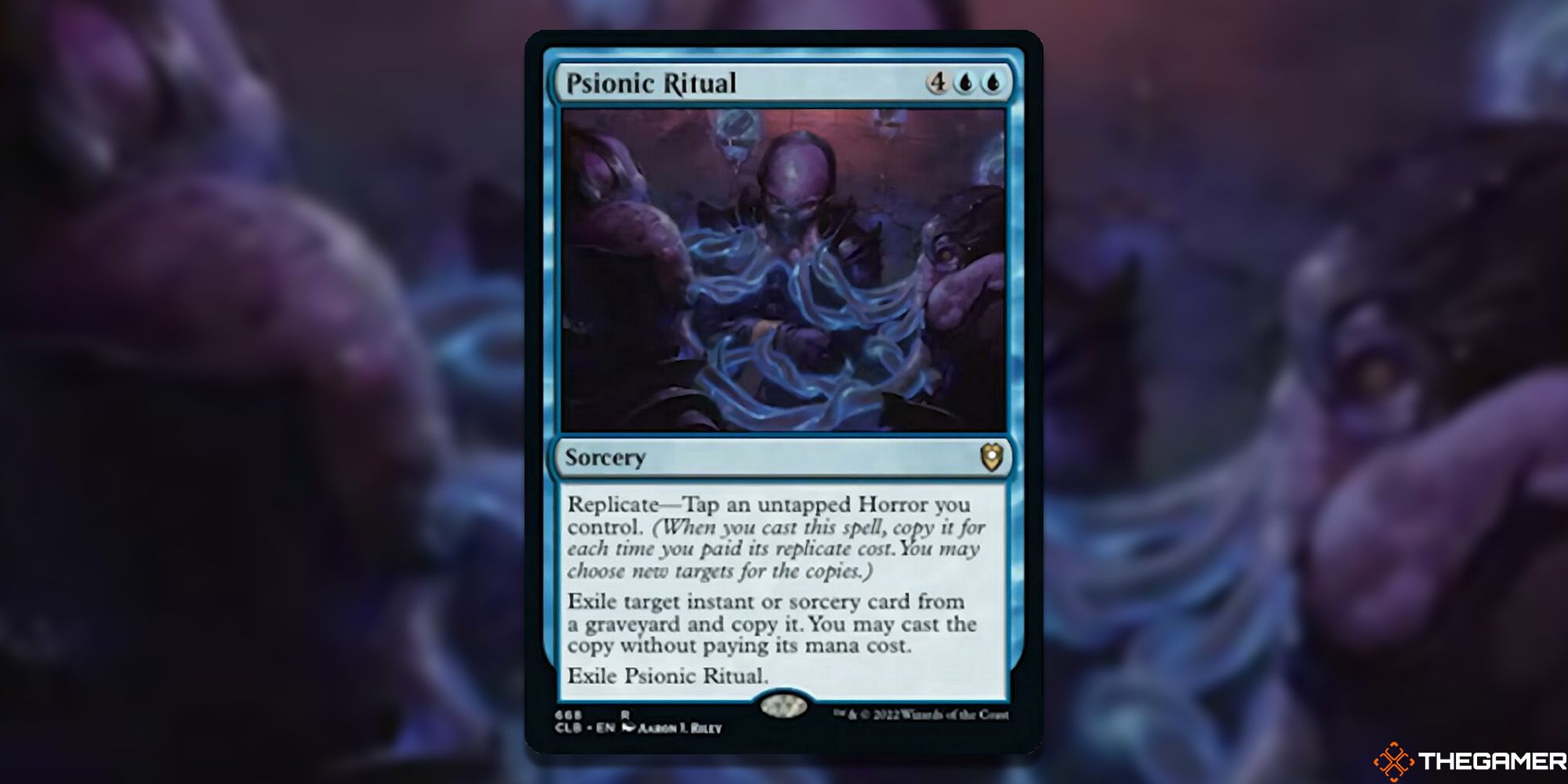 Exile target instant or sorcery from a graveyard and copy it. You may cast the copy without paying its mana cost.

Replicate is another returning mechanic for Baldur’s Gate’s Commander decks, allowing you to pay a cost to copy the spell an unlimited number of times. With how many Horrors you’re planning on playing with this deck, you should be able to copy Psionic Ritual more than enough times to nab yourself a win. On top of everything, it’s a great form of graveyard hate by exiling scary cards (or ones with flashback) before your opponent has the chance to get them themselves.

You can’t target every copy of the spell at the same instant or sorcery, as otherwise all but one of them would fizzle. This isn’t a Mnemonic Deluge, it’s more of a way to just spam out every instant or sorcery in every player’s graveyards and throw them back in their faces. 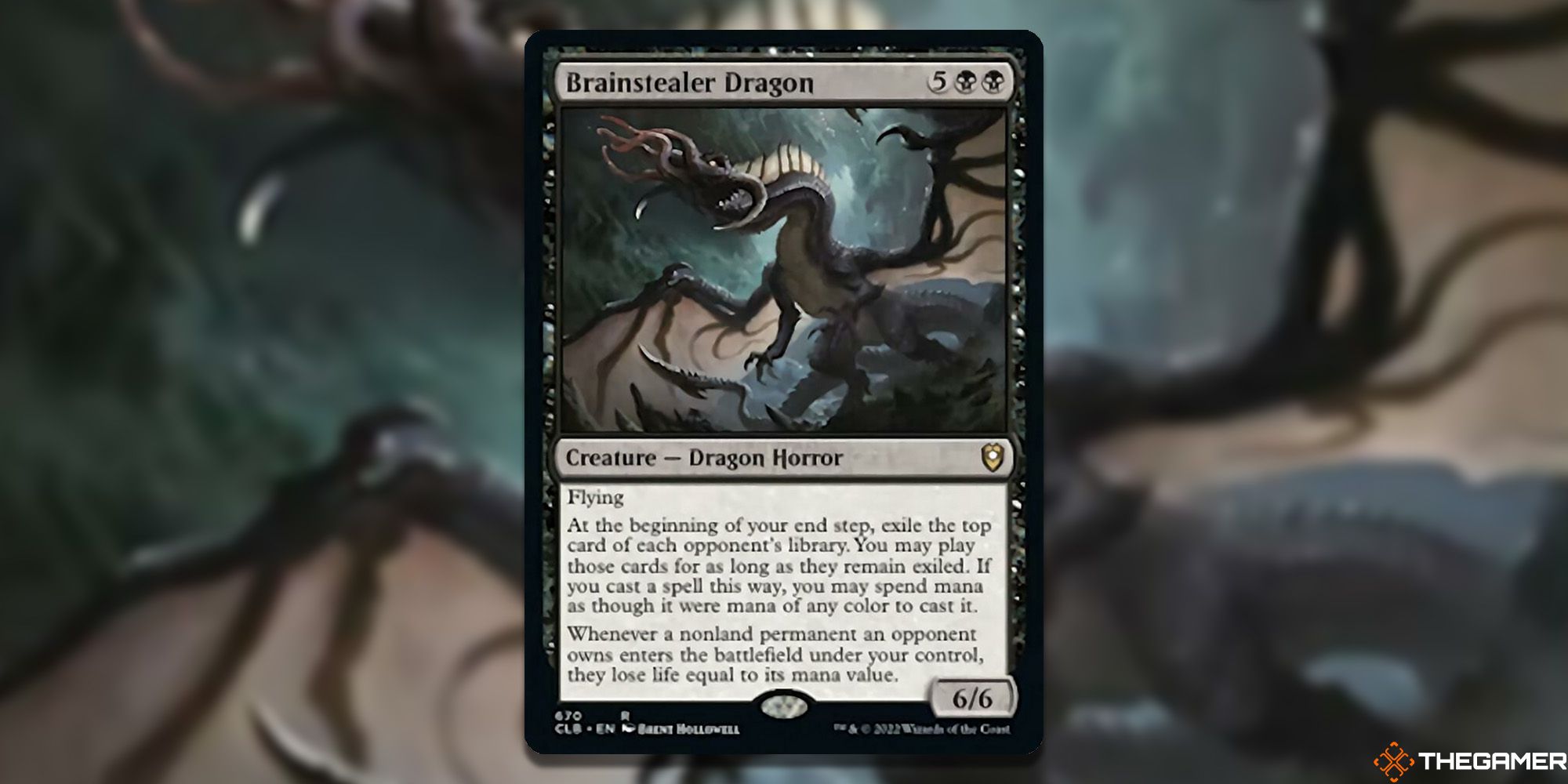 At the beginning of your end step, exile the top card of each opponent’s library. You may play those cards for as long as they remain exiled. If you cast a spell this way, you may spend mana as though it were mana of any colour to cast it.

Whenever a nonland permanent an opponent owns enters the battlefield under your control, they lose life equal to its mana value.

For two mana more than an Etali, Primal Storm, you can get this slightly worse version that requires you to pay for the spells you want to cast. This is a weird card, as you’ll likely spend too much to cast the Brainstealer and then not have enough to actually cast the spells it exiles.

Ideally, you’ll be able to keep this up for a whole turn cycle and then use it on your next end step to cast stuff off the top of your opponents’ libraries. But, more often than not, this Dragon is going to be removed before it gets the chance to do that. 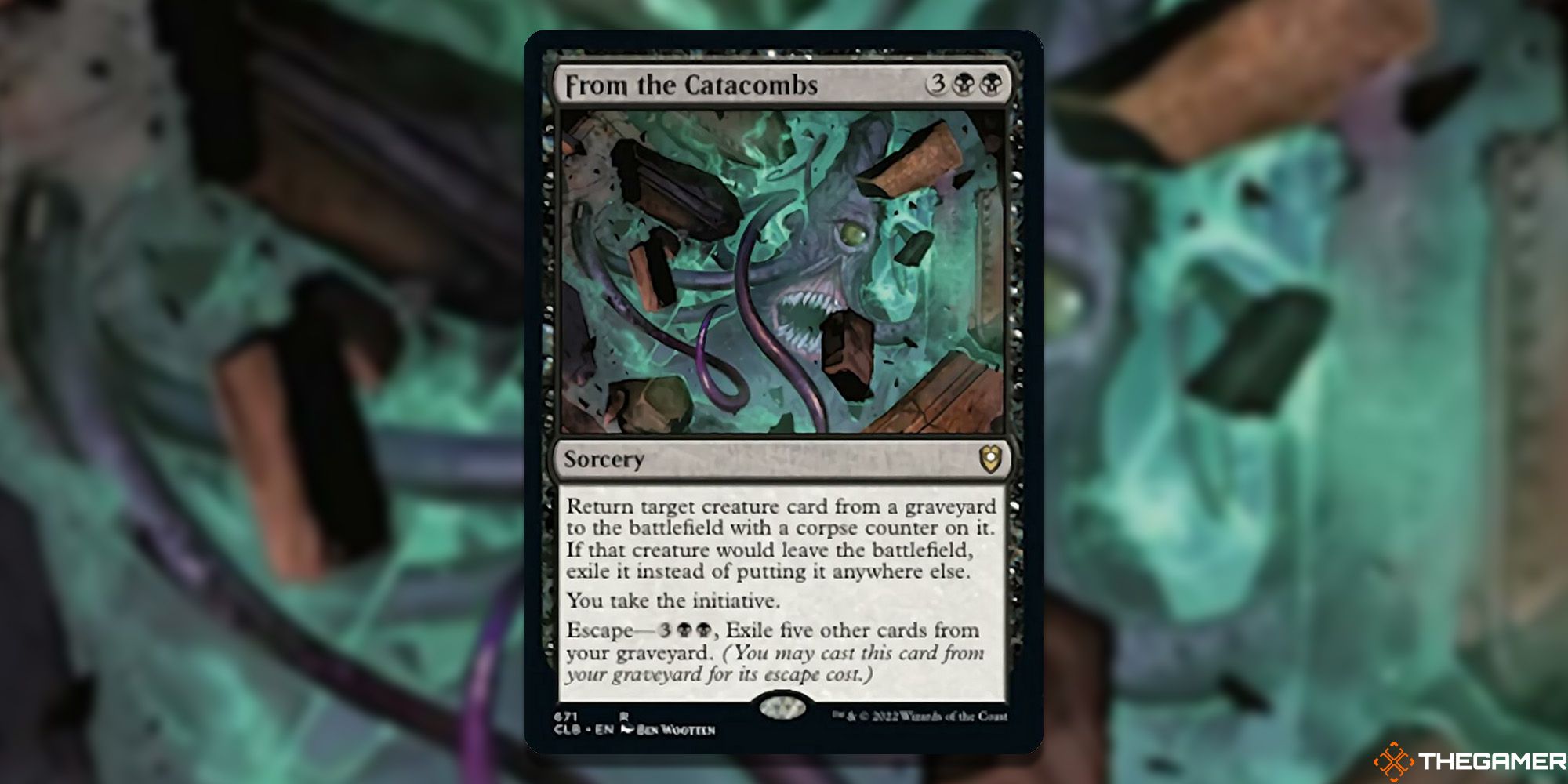 You take the initiative.

Corpse counters have only been used a few times before as a way to track what happens to the creature when it dies. This is also an easy way to make a creature modified, which in a post-Kamigawa format could turn out to be incredibly useful.

Interestingly, this doesn’t specify whose graveyard you can take from, not does it dictate whose control you put it under. If someone has a Phage The Untouchable in their graveyard, this could be a great way to knock them out of the game. If someone drops an even scarier creature into their graveyard later on, you can simply escape it to cast it again. 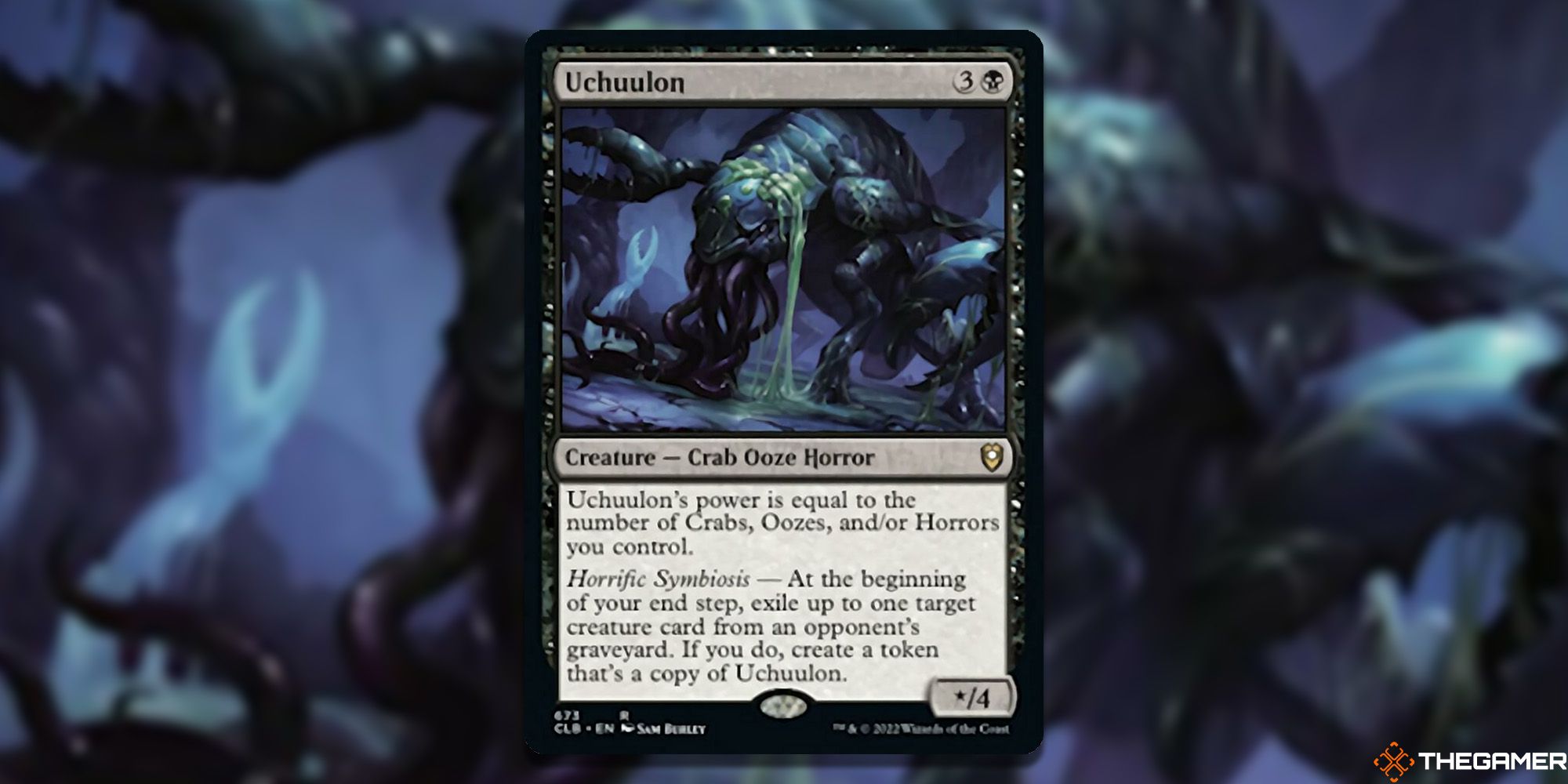 Uchuulon’s power is equal to the number of Crabs, Oozes, and/or Horrors you control.

Horrific Symbiosis – At the beginning of your end step, exile up to one target creature card from an opponent’s graveyard. If you do, create a token that’s a copy of Uchuulon.

The award for the best creature type in all of Baldur’s Gate goes to Uchuulon, a Crab Ooze Horror.

Finally, Crab tribal is a thing – though it’s mostly a front for Uchuulon’s main goal of making as many copies of itself as it can to pump itself up. Put away the Ruin Crabs and Charixes, all you need here is enough populate to swarm the board with a wave of Uchuulons.