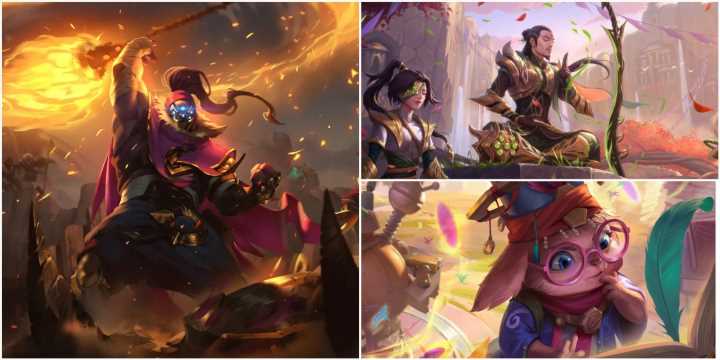 The latest Legends of Runeterra expansion, The Darkin Saga: Awakening, has brought five new champions to the game, each one with its own unique powers and abilities. The Awakening expansion brings us more of the Darkin, former Ascended God-Warrior beings who served ancient Shurmia, 65 new cards, as well a brand new card type, Equipment.

Just like every expansion before it, there are some champions in Awakening that are simply better than others. Fan favorite champions Jax, Kayn, Master Yi, and Ornn are making their debut in Legends of Runeterra, as well as a brand new original champion, Norra.

5 Master Yi – Go With The Flow 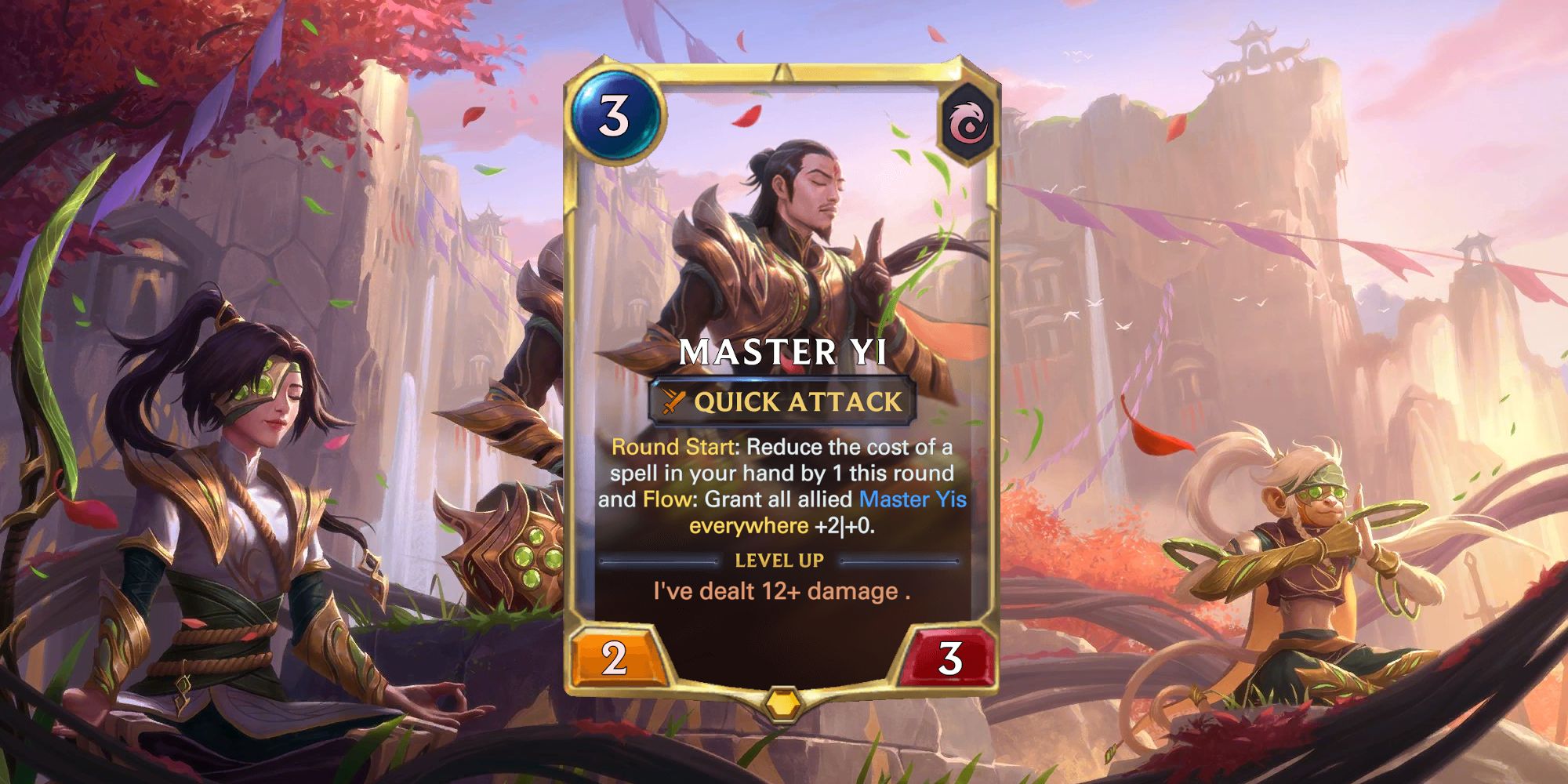 A cheap champion, Master Yi starts off strong as a three-mana 2/3 with Quick Attack and a full paragraph of abilities. At the start of the round Master Yi reduces the cost of a random spell by one and grants Flow, a new mechanic unique to him that grants the Flowed status if you played two or more spells or skills the previous round.

Once in the Flowed state, Master Yi gives all his cards an additional +2 attack. However, he has a somewhat difficult level-up condition, requiring him to deal at least 12 damage. Even under the best conditions, it will require several turns to get Master Yi to deal enough damage, leaving him wide open to any number of disruption spells.

Master Yi does come with an interesting package of support cards and a piece of fancy new Equipment that also has the flow ability. However, his whole package struggles with consistency and is particularly vulnerable to removal compared to the other Awakening Champions.

4 Ornn – Strike While The Hammer Is Hot

The Frejlordian demi-god of forging makes his debut in Legends of Runeterra and as you should expect, he is all about Equipment. Sitting at an expensive seven mana, Ornn comes down late in the game but when he does, he gets to copy a piece of Equipment from in play or in your hand and attaches it to himself when he enters the board. This ability allows for some powerful late-game plays, but can be vulnerable to removal and is dependent on actually having Equipment available for him to copy. Even without Equipment, Ornn gains two Forge triggers every time he attacks, upgrading him to a 6/6 with his first attack.

Once Ornn levels, he all but closes out a game on his own. With each attack, he continues to get two Forge triggers, as well as summoning an attacking Spirit of the Ram follower with Overwhelm that gains his stats. Ornn’s Champion Spell leaves a lot to be desired, unfortunately, granting a Forge trigger on an ally, then dealing one damage to all units, and then doing it all again. 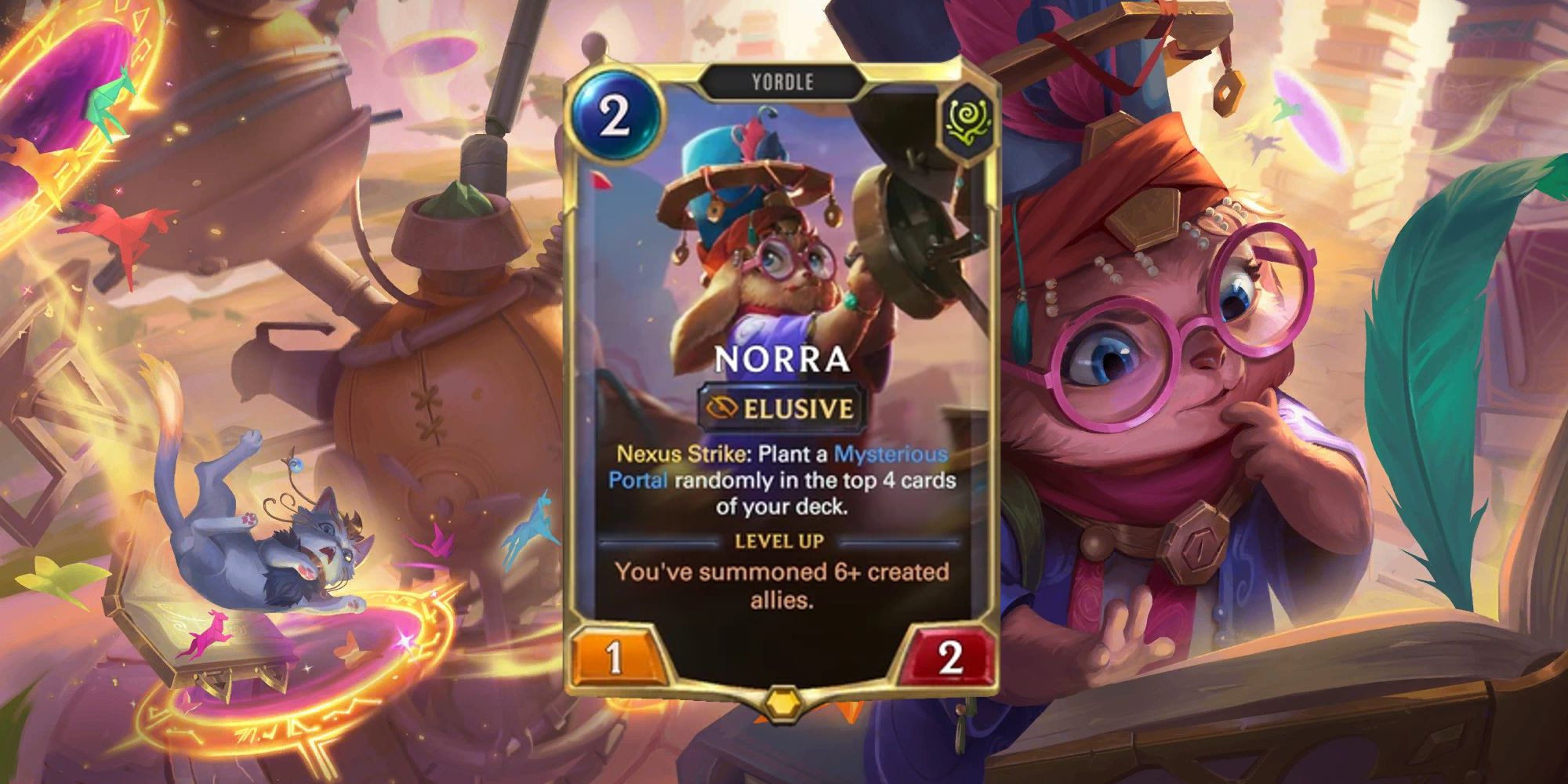 Norra is the latest original Champion in Legends of Runeterra, and she has a fairly unique mechanic to build around. Every time Norra strikes an enemy Nexus she creates a Mysterious Portal boon randomly on one of the top four cards of your library. When the card with the blessing is drawn, you summon a random two or three-mana follower or creates a fleeting zero-mana copy of the card in hand if your board is full. Once six or more created allies have been summoned, she levels up. While leveled, Mysterious Portals will now summon a four, five, six, or seven-cost follower, greatly increasing the odds of something powerful dropping on the board.

Because of the extremely random nature of her kit, Norra is a difficult champion to rank. Some games could be explosively powerful, randomly summoning the best units available, while the next match could be complete garbage. Norra becomes a little more consistent with her Champion Spell and supporting cards, all of which add additional Mysterious Portals to the top four cards with each one contributing to her level-up conditions. 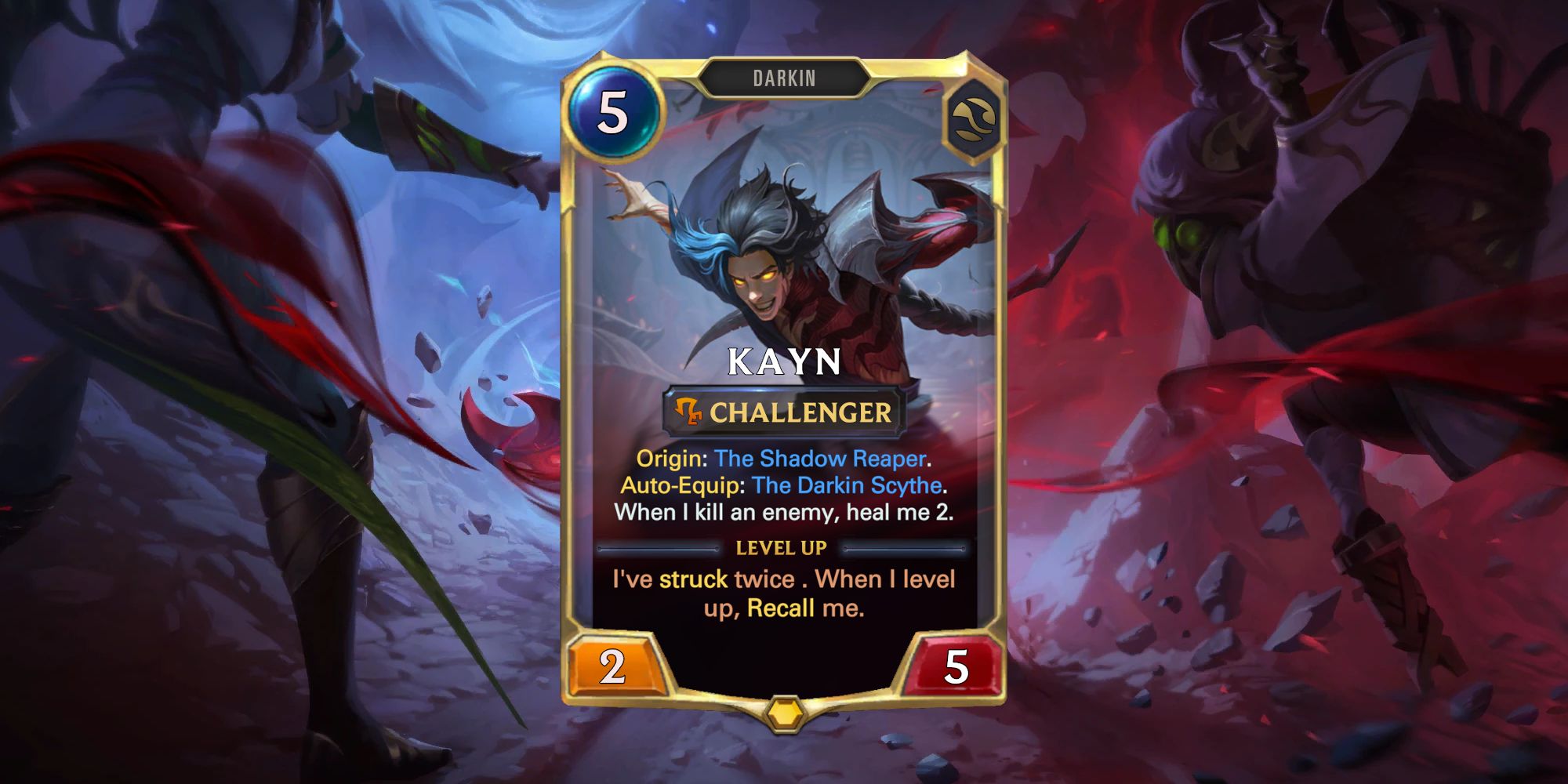 The Darkin champion Kayn takes the number two slot for the latest Legends of Runeterra champions. At five mana Kayn is a little more midrange than Jax and also has multiple forms he can level up into, making him an extremely versatile champion, depending on how the game is going. Upon playing Kayn again after he recalls, you have to pick which version of Kayn you want for the rest of the game. You can choose to transform Kayn into The Shadow Assassin, gaining Evasion and the Shadow Scythe Equipment. Alternatively, you can choose Rhaast, gaining Overwhelm, the Corrupted Scythe Equipment, and the ability to fully heal himself and heal the Nexus for two points with every kill.

Kayn’s origin, The Shadow Reaper, allows you to include any Cultist cards in a deck, though the other followers don’t compliment Kayn well. Thanks to Kayn’s plethora of Equipment though, he can give all those Cultist followers a power boost. For a little more power, Kayn’s Champion Spell gives him a free attack, as well as granting him Quick Attack, all but guaranteeing a free kill. 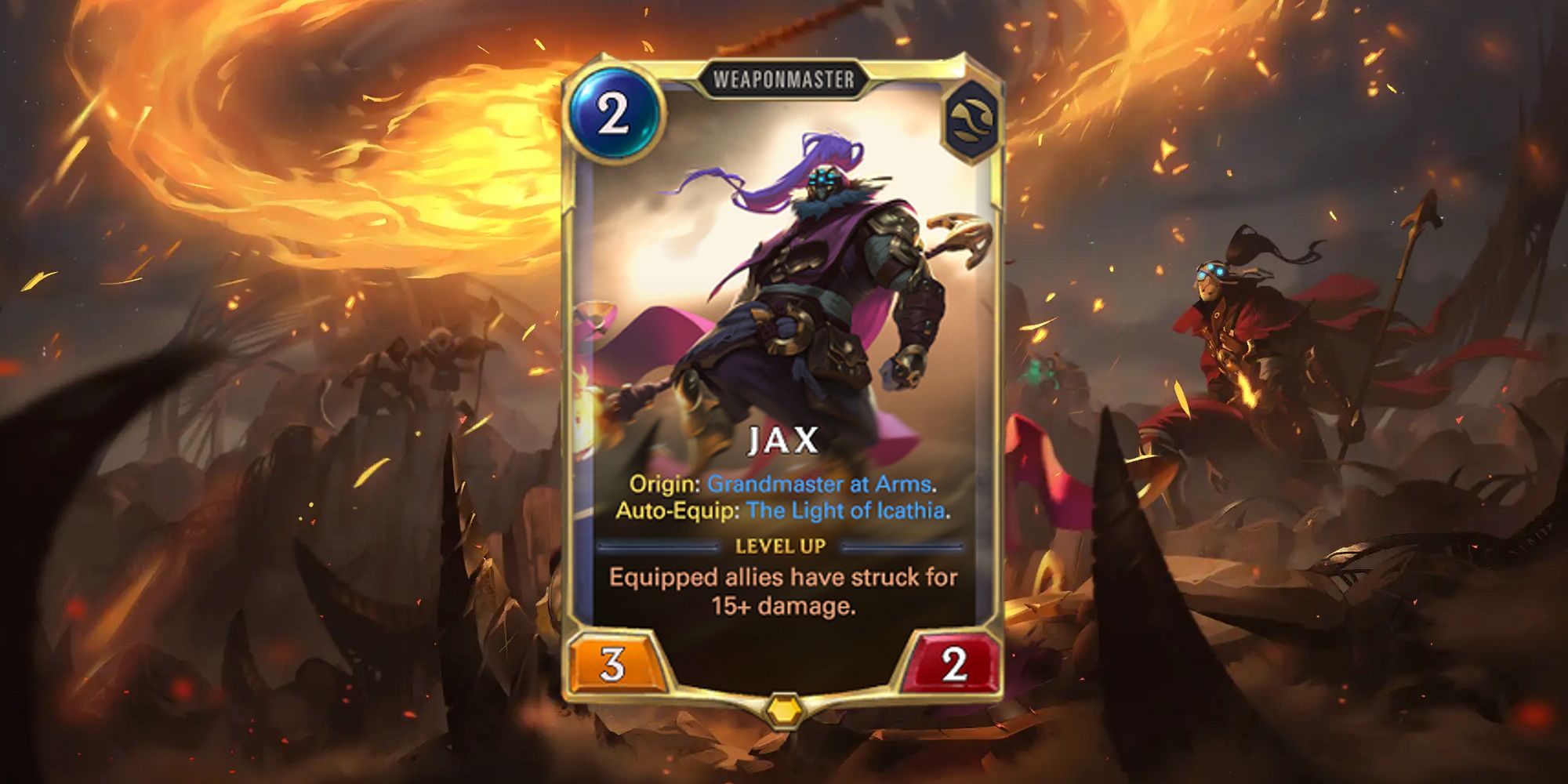 At only two mana, Jax is the cheapest of the new champions. With him comes not only a new origin, Grandmaster At Arms, but also two new keyword abilities, Improvise and Auto-Equip, as well as a focus on the new Equipment card type. With Jax’s unique Equipment, The Light of Icathia, he gains Quick Attack and Overwhelm if he’s leveled. Thanks to his Auto-Equip ability, The Light of Icathia attaches the turn he comes out and immediately outclasses most early followers and champions.

Once he levels up, Jax gets a stat boost as well as temporarily gaining +1/+1 for each equipped ally when he attacks. Even Jax’s champion spell gives him some protection with Barrier for the round and then Forge – another new mechanic that gives a +1/+1 to the unit or an attachment if they have one – making him and his Equipment even stronger.

Jax’s strength comes from his resilience and board package. Even if he dies his Equipment grants other units bonuses. Jax also has the generic Runeterra region, so he is not tied to any specific region, giving him tons of flexibility.