Planet Zoo has always placed animal welfare and conservation at the heart of the game. Every animal added to your zoo comes with a Zoopedia entry detailing their needs, extinction status, and other interesting facts. Caring for, breeding, and releasing endangered animals back into the wild has always been an important part of Planet Zoo, and now it’s taking centre stage in the Conservation Pack.

We spoke to Planet Zoo art director Marc Cox and game designer Kilian Scmitt to find out more about how Frontier is promoting conservation awareness through this pack and beyond.

“Conservation is a core component of Planet Zoo, with the welfare and prosperity of the animals a key aspect of gameplay,” Marc Cox tells us. “Modern zoos play a key role in the future of wildlife, so it was important for us to find ways to educate players about the plight of these amazing creatures we share the planet with, in a way that allows them to discover information in a gradual, holistic way.”

Scmitt adds, “Since conservation has always been an aspect of the game simulation, creating a DLC based upon this theme felt like a natural step to take. Our impact as humans on the planet is always at the back of our minds too, so with the Conservation Pack we wanted to take the chance to highlight not just the challenges faced by certain species but by the wider environment.”

These core values are immediately apparent when playing Planet Zoo. Creating suitable habitats, caring for animals properly, and keeping them safe and fed is part of the game’s very essence – so much so that you’re punished with a bad reputation, disruptive protestors, and other dire consequences if you don’t play nice with nature. As you build your zoo you’ll find out more about the animals in your care through various means, including in-game goals, community challenges and the Zoopedia. 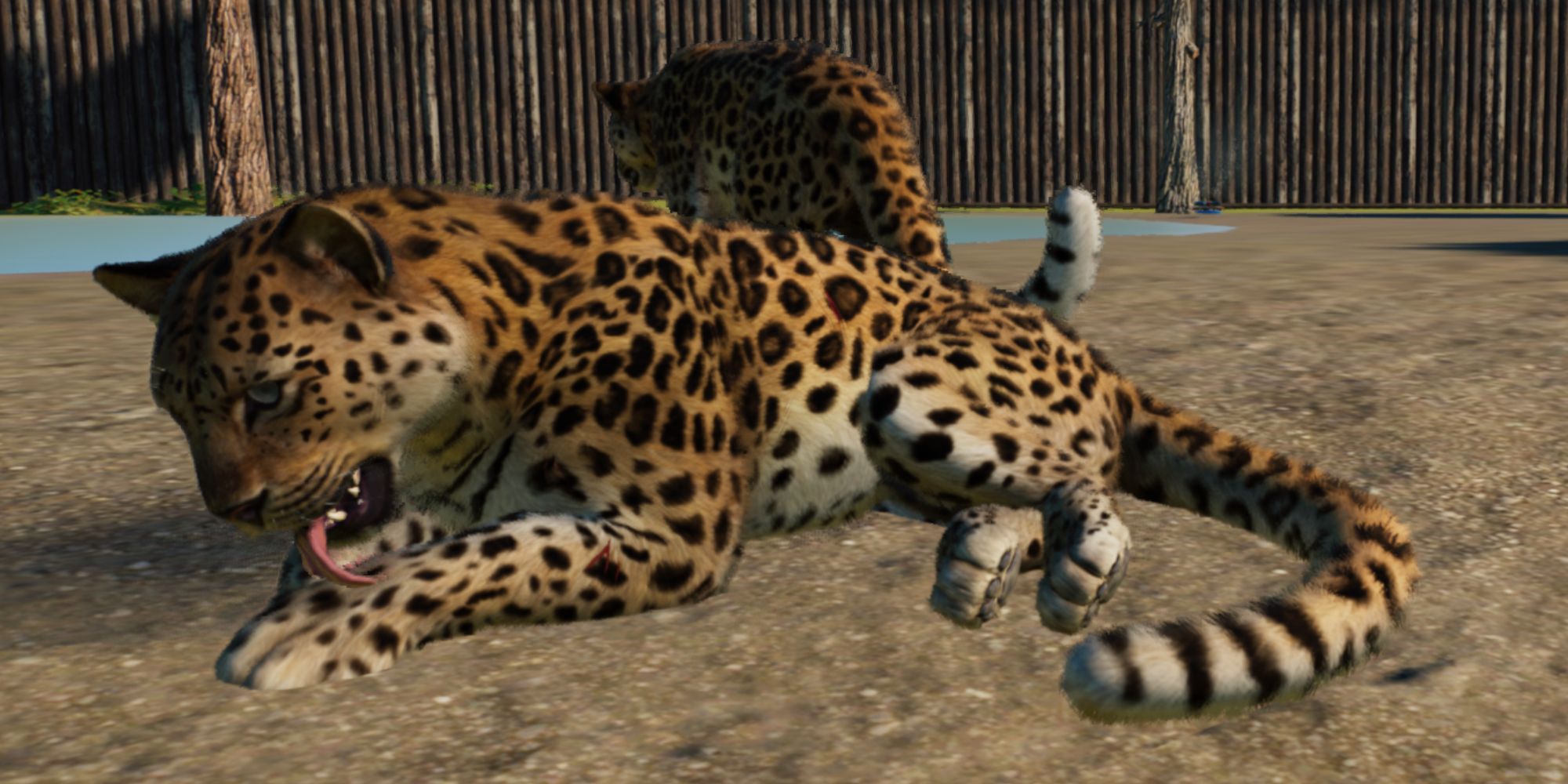 “We regularly receive praise for the way in which we’ve represented the challenges, which is great.” Cox says. “Our player base are true animal lovers and generally very well informed about the issues facing all life on Earth. I think all of us feel we are at least aware of key issues but even the dev team are surprised to discover just how fragile the balance can be for some species.” It’s discoveries like this that have led to this conservation pack that focuses on five endangered animals; the Prewalski’s Horse from Mongolia, the Amur Leopard from Russia and China, Malaysia and Indonesia’s Siamang, the now extinct in the wild Scimitar-Horned Oryx, and the critically endangered Axolotl from Lake Chalco and Lake Xochimilco.

As with other Planet Zoo DLC, these four habitat and one exhibit species can all be added to any zoo you build. The pack also comes with a new timed scenario that sees you rescue, rehabilitate, and release animals in the Turtle Rock Wildlife Orphanage. Along with this the natural pairing of sustainability is evoked through a range of beautiful scenery items, buildings, and foliage. 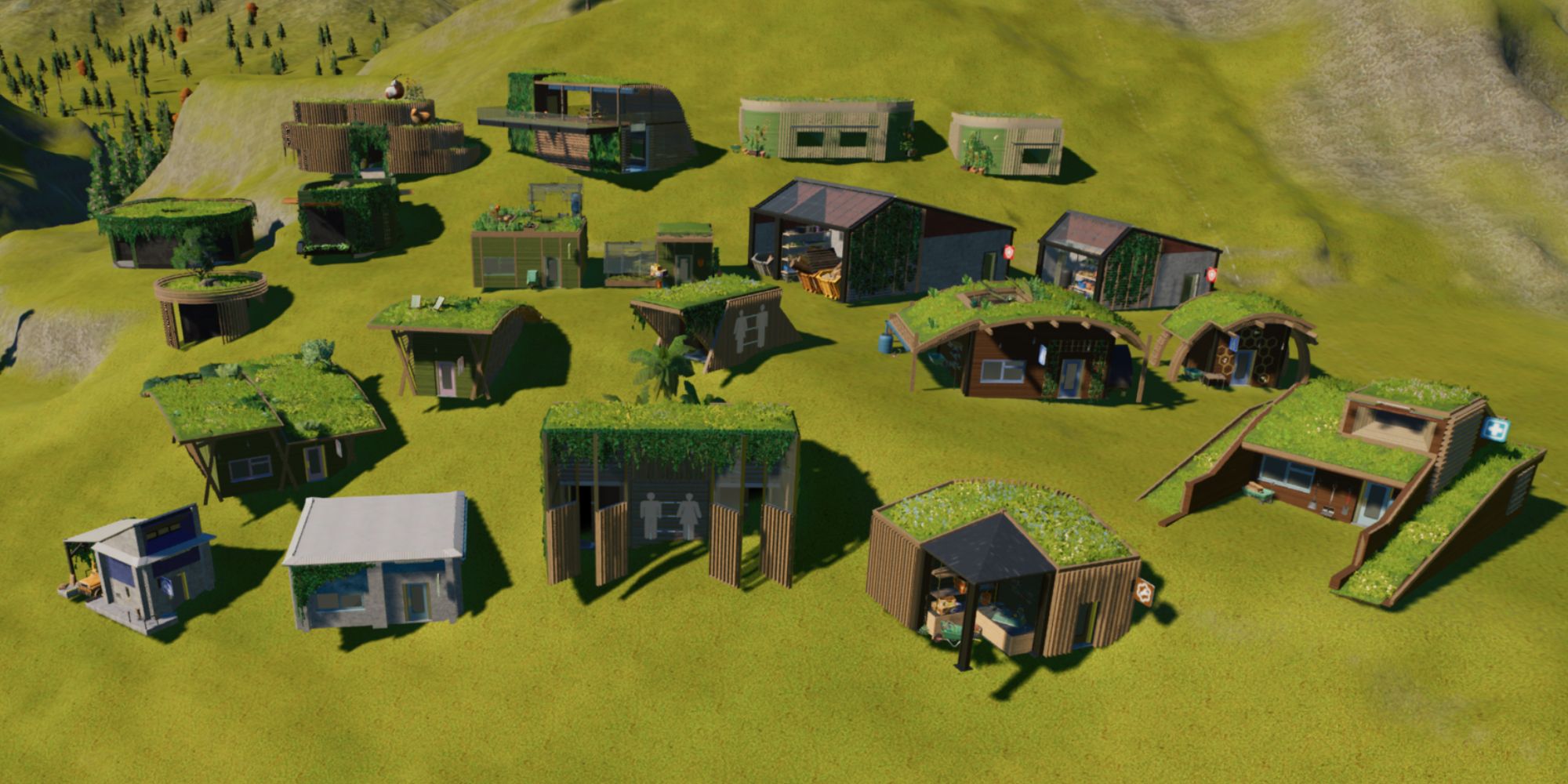 While endangered animals in the game are nothing new, there is something special about this one. “The conservation status of animals is directly incorporated into parts of the game’s simulation, so it’s always a factor we consider,” says Scmitt. “When choosing species for the Conservation Pack, our choice of animals was heavily influenced by their conservation history. Przewalski’s Horse is currently an endangered animal, but actually used to be considered extinct in the wild. Their recovery is a remarkable testament to tireless global conservation efforts. In turn, the Scimitar-Horned Oryx is a species currently still extinct in the wild.

“Zoos play a vital role in their survival with global breeding and release programmes. Siamangs – like most other gibbons – are endangered by habitat loss caused by land clearance for palm oil plantations, something that has been hotly debated in recent years. Amur Leopards are critically endangered by habitat loss and poaching, with only a few more than 100 individuals remaining in the wild. There are more Amur leopards in captive care than in the wild, to ensure the species can live on. The Axolotl tells a similar story – while commonly kept as a pet, this animal is almost extinct with its native habitat incredibly damaged.”

While you may not find these animals in the wild, you can see them in your zoo, and the animations are captivating. Both the Amur Leopards and Siamangs are climbers, which always makes for a challenge, but is fantastic to watch. They’ll need logs, branches, and bridges to scramble up and plenty of enrichment toys. Provide these and you’ll see them clamber for days, including on the new Gibbon-friendly climbing frames. The Przewalski’s Horse and Scimitar-Horned Oryx on the other hand just need space to run, and, in the case of the latter, apparently have a random scrap for no reason. They are rounded out by the tiny but adorable Axolotl that you’ll have to play hide and seek with in order to locate them in their exhibit. 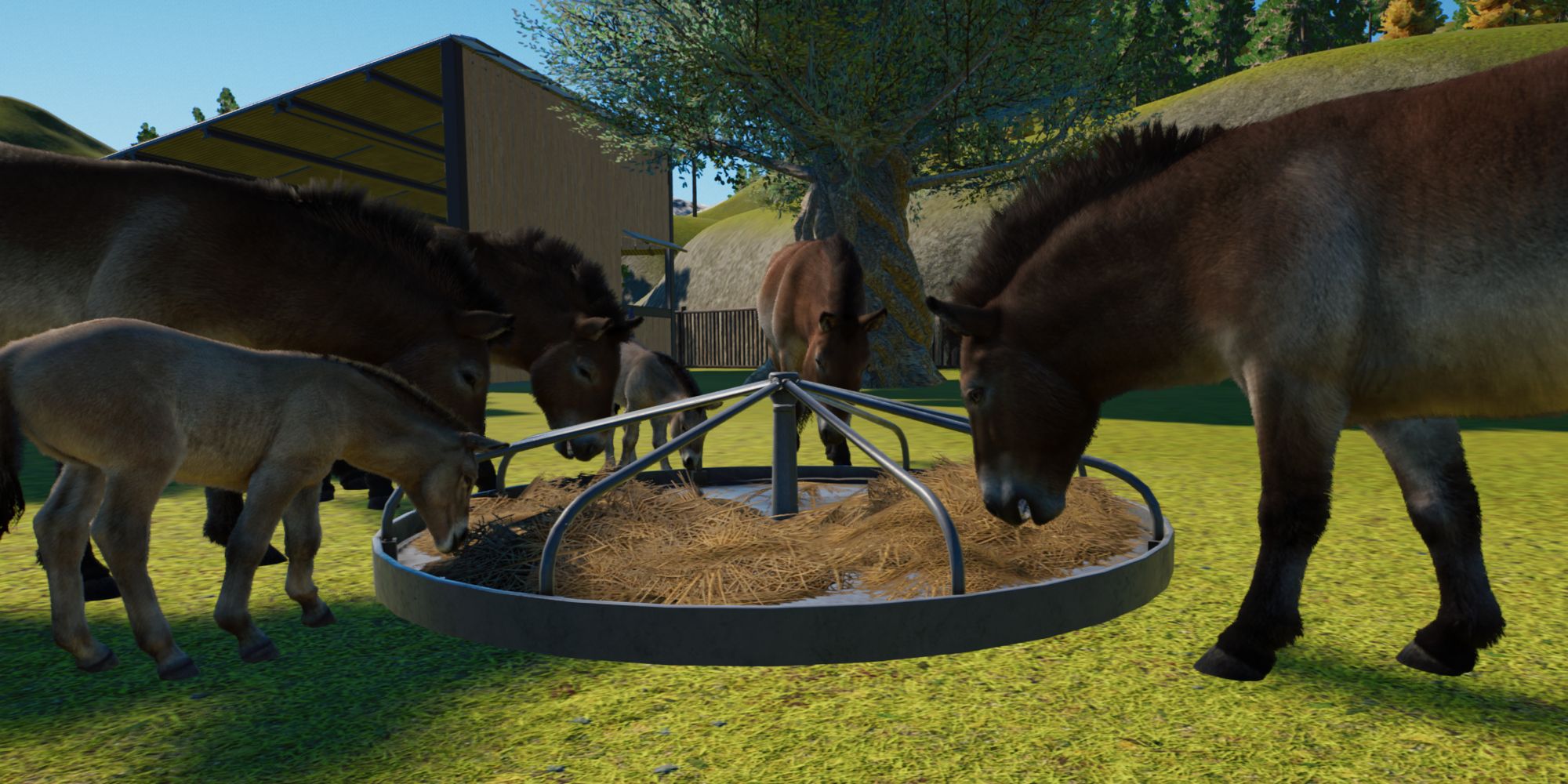 The Planet Zoo team undertakes extensive research studying animal behaviours in order to make its creatures feel so real. “It’s really important to us that our in-game animals, and the inner workings of players’ zoos, reflect their real world counterparts in a way that feels authentic,” says Scmitt. “We’ve worked with several different zoos throughout development, often visiting them ourselves, such as Colchester Zoo, San Diego Zoo, and Shepreth Wildlife Park to name a few. We’re sure to get professional input for our animal research, as well as recording the animals for animation reference and vocalizations which we then directly use in the game to ensure they feel as accurate as possible.”

These endangered species are the core focus of the pack and its timed scenario, but they are complemented well by the sustainable decor that perfectly reinforces the game’s eco-friendly themes. Planet Zoo has always promoted sustainability with lower running costs when using solar panels and wind turbines, as well as the ability to generate conservation credits by recycling, but the Conservation Pack takes it a step further. “Sustainability is something many real-world zoos focus on in their education campaigns or facilities,” says Scmitt. “Sustainable buildings in zoos have many benefits, but wider sustainability and biodiversity are also important to ensure habitats can support endangered species.” 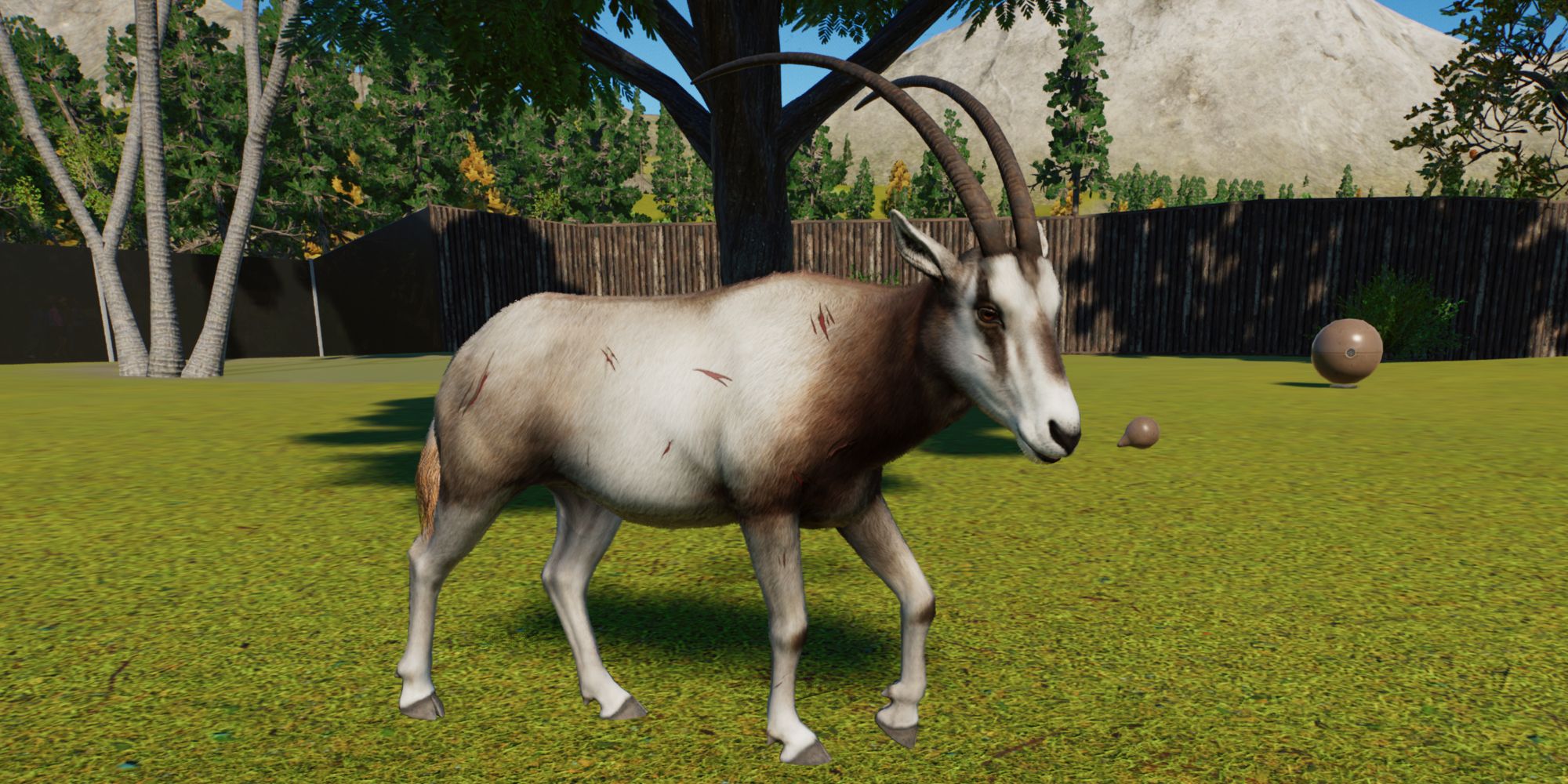 The buildings evoke a feeling of modern design alongside sustainability, with a focus on natural materials and living roofs. As usual, there are pre-built staff and guest facilities as well as a range of separate materials for builders to use to create custom designs. Something that isn’t usual is the wide range of small decor items that add a more ‘working zoo’ look. These include boxes of fruit, buckets, hosepipes, spades, and other items you’d expect to see in and around staff buildings. It’s these little things that make the game unique and the attention to detail in all elements of Planet Zoo is what makes it so engaging.

Players often praise Planet Zoo for its focus on conservation, which is likely so successful thanks to the continued efforts of the team to work with organisations including Shepreth Wildlife Park, San Diego Zoo, and conservation experts. But some of Frontier’s efforts have had real-world impacts, too. “We have received a lot of positive feedback from players who have learned about new species and their conservation challenges, via Planet Zoo,” says Scmitt. “We’ve even heard from players who have credited Planet Zoo as an influence for them going on to pursue zoological or conservation-related fields – as developers, we couldn’t be more honoured to have such impact and engagement with our players.”