Fallout 76 fans are counting down to the release of the Nuclear Winter Battle Royale mode and free trial.

After apologising for a bungled Fallout 76 launch during the Bethesda press conference, the studio announced plans to hold a free trial.

Available on PS4, Xbox One and PC, the free trial has a June 10 release date and runs until June 17.

There’s no word on a launch time, although Fallout 76 updates typically go live at around 3-4pm UK time, so expect it to launch around then. Express Online has contacted a spokesperson for clarification.

The Fallout 76 free trial launches alongside a “sneak peek” of the Nuclear Winter Battle Royale mode.

“Nuclear Winter is a brand-new mode in Fallout 76 that pits you against your fellow players like never before,” Bethesda explains.

“The battle for the role of Vault 51’s Overseer has begun. In Nuclear Winter, you’ll take part in a 52-player fight to the death.

“Rank up, unlock new and exclusive Perks, deploy a C.A.M.P. and even launch nukes. As the ring of fire closes in, will you be the last one standing?”

Nuclear Winter will be released in full later this year, but fans will be able to check it out during the free trial.

According to a new post on the Bethesda website, players will be able to access new parts of Vault 51 by moving up the ranks in Nuclear Winter.

Similar to Battle Royale phenomenon Fortnite, Nuclear Winter will come with its own set of challenges.

Completing challenges unlocks new cosmetics and Workshop items, which can be used in any game mode and by any character.

However, while you can carry XP, caps and cosmetics earned in Nuclear Winter back to the main game, the reverse isn’t true. 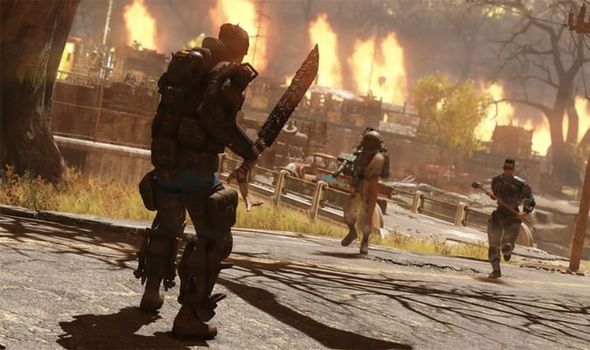 “Many of these mechanics have been adjusted to better suit this new gameplay mode and map size, including the stats of your weapons, armor, Chems and more.

“And while you can carry your Adventure Mode character into Nuclear Winter, their level doesn’t affect how much damage you can inflict or receive.

“Everyone starts each match on an even playing field. You raise your damage output and increase defensives by tracking down weapons and armor as the match progresses.”

VATS will also be available in Nuclear Winter, although it will only work on enemies, which have been rebalanced to pose less of a threat.

The C.A.M.P. mechanics have also changed. Players can place settlements quickly and without resources, but turrets have to be looted from other players and boxes scattered around the map.