FIFA 22's Career Mode has received some much-needed attention from EA after years of neglect in the face of the Ultimate Team cash cow. Finally, there have been some efforts to add more complexity to Career Mode, which is renowned for its repetitive nature after two or three seasons.

New player development strategies, scouting mechanics, and interactive features like interviews all add up to make it a much more engaging experience. With the new opportunities to create dramatic moments on and off the pitch in mind, here are some quick tips to maximise your time in FIFA 22's Career Mode.

Choose A Manager Career Over A Player Career 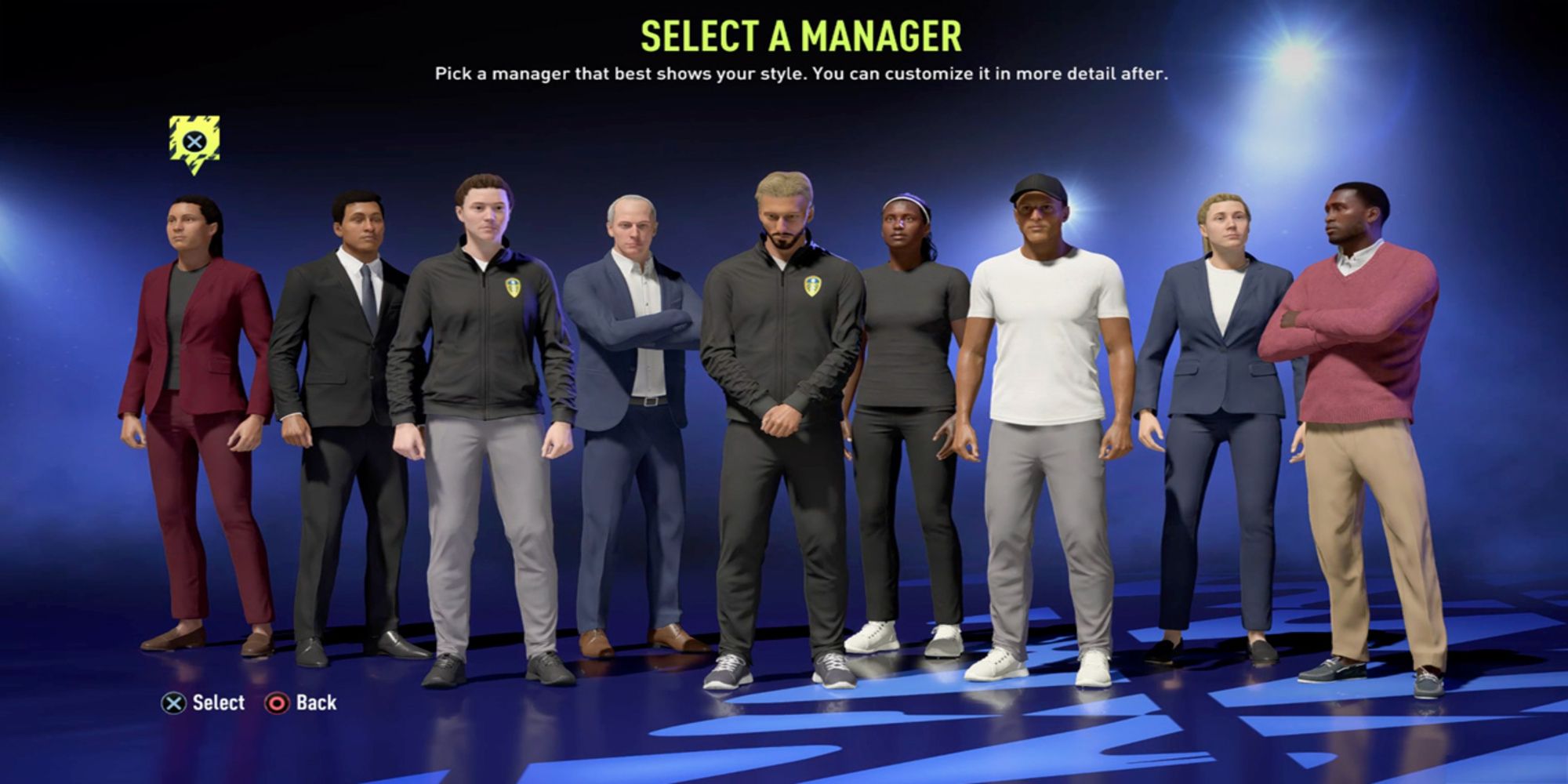 This is a simple tip but one that dictates how you will be able to play the game. When you first set up a Career Mode, you will be asked whether you want to play as a manager or an individual player. Both options have their merits.

A player-focused career gives you a deep dive into the struggles of becoming a professional footballer, but you have no control over the wider club's actions. In a manager career, you get to oversee everything from team lineups to transfers and youth squad development.

Better yet, as a manager, you can build a relationship with each player in your squad as you try to shape the best possible team. Not only is this vital in learning where each player performs best but also what they need to stay happy, such as more game time.

As a consequence, you'll find yourself more invested in the team's performances as you try and balance winning games with maintaining a satisfied squad.

Pick A Project, Not An Established Team 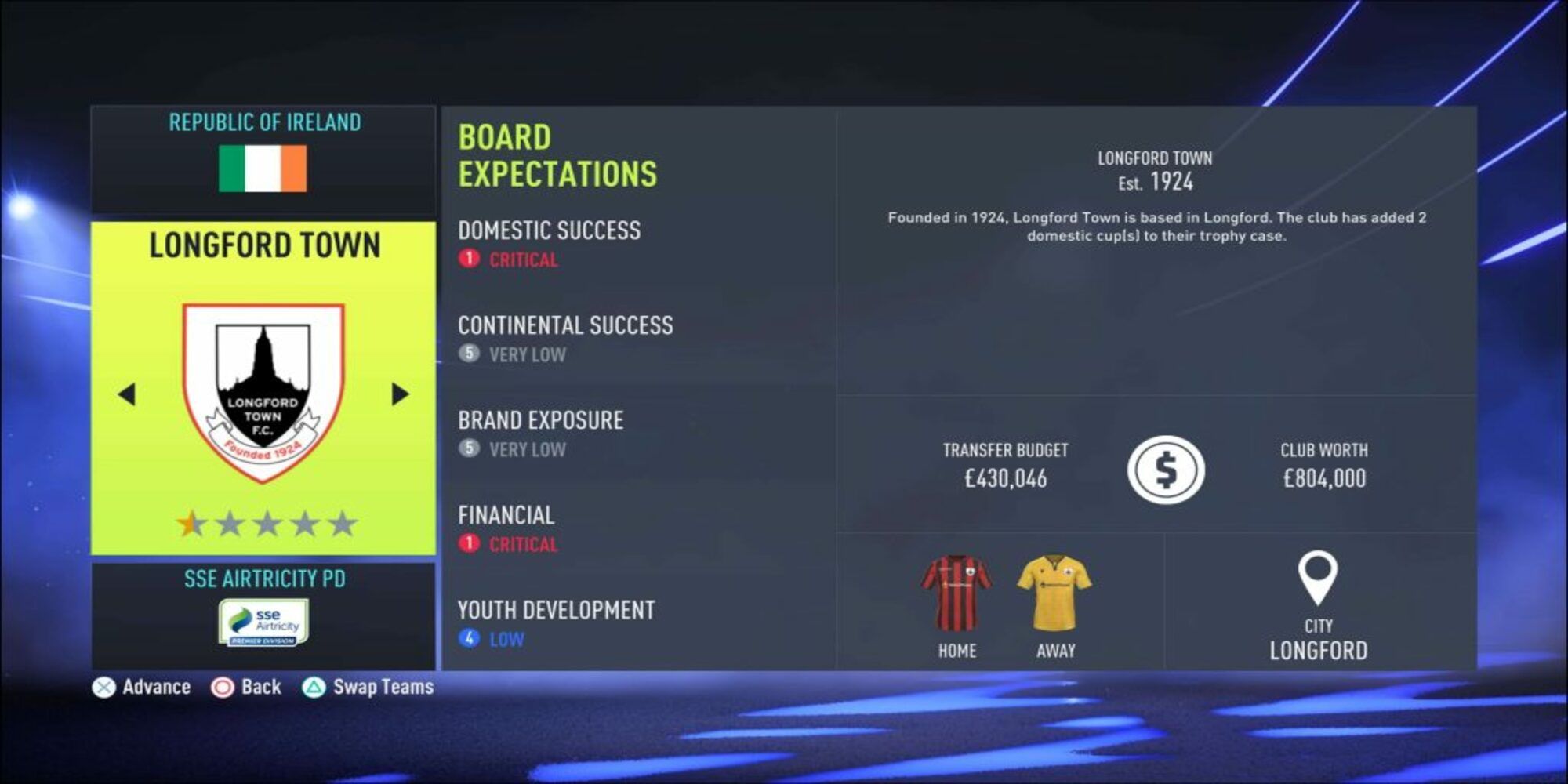 It can be very tempting to choose one of the big teams for a Career Mode. Big budgets and star players are enticing prospects indeed, but Career Mode is at its most fulfilling when the balance of difficulty is just right. Winning games and trophies should feel like a triumph, not a formality.

Instead, picking a smaller team from a lower league with a tighter transfer budget can make for a far more satisfying journey. The definitions of success for smaller clubs are much more diverse, which transforms some of the more classically overlooked parts of Career Mode.

A good example is domestic cup tournaments. When playing with bigger teams, these often lose any sense of importance because the rewards for winning them are insignificant in comparison to existing club finances. An extra £5 million to add to the £180 million already in the bank? Eh, think I'll just skip this FA Cup game against Accrington Stanley, thanks.

But smaller clubs live off of cup tournaments. It is the only way to build significant transfer funds meaning cup runs become some of the most exciting aspects of the game. You might not be able to sign Haaland, but leading a team needing help to glory is guaranteed to get you more emotionally invested in Career Mode. 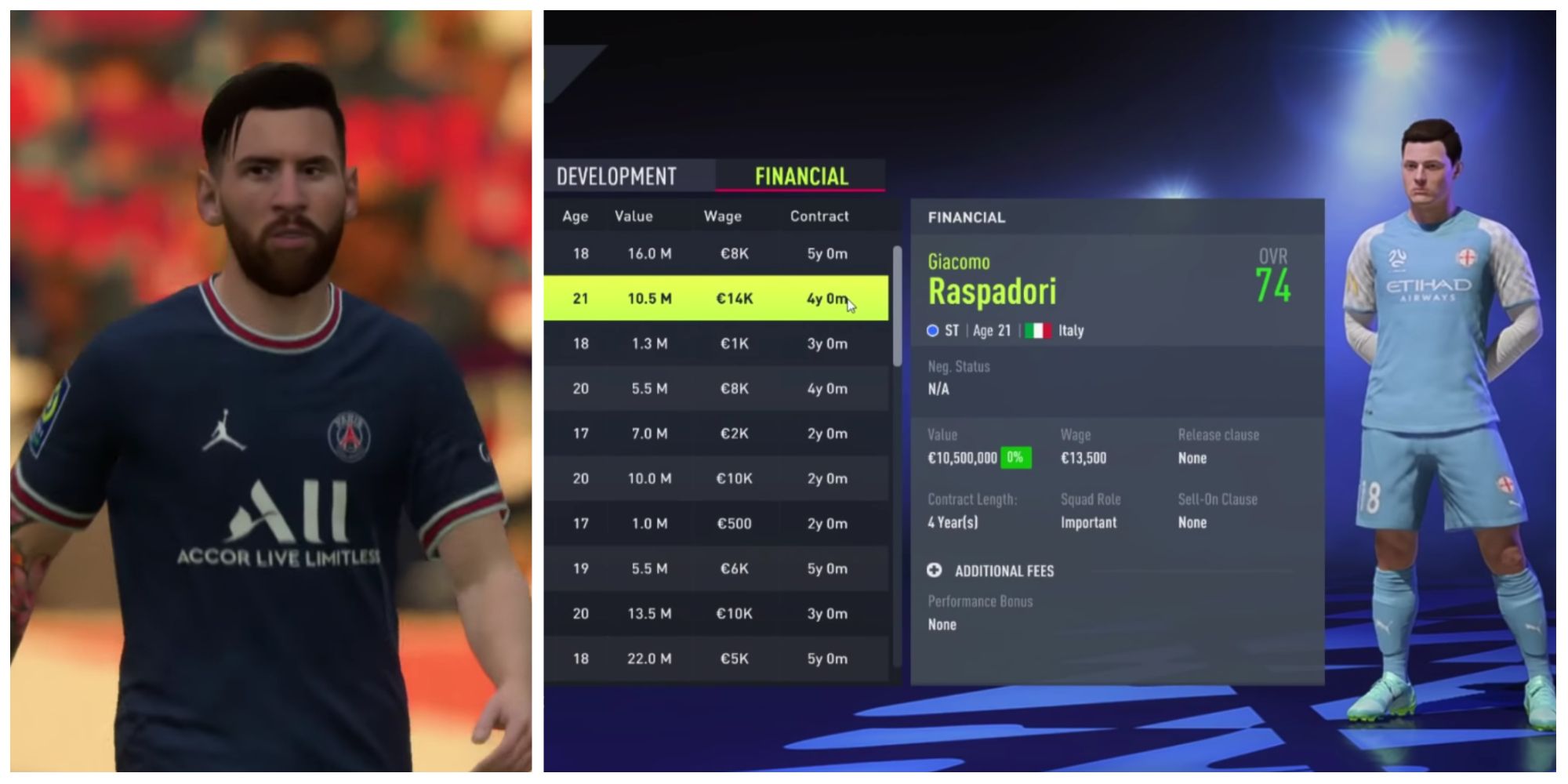 Having a good transfer policy is the backbone of long-term success in Career Mode and that means putting some thought into it. The obvious strategy is to sign players in their prime aged around 25-27, but this is always the most expensive option.

It is also only a short-term solution. FIFA 22 has new player degradation mechanics meaning beyond the age of 26, a player's overall rating will stop increasing, and by 29 it'll begin declining. You will make a loss on what you paid and end up with an aging squad.

Instead, a healthy policy is to mix some older legends, cheaper because of their age, with some younger prospects that will grow in ratings over a season. With this blend, you'll have short-term quality in the older players who will buy time for your younger players to gain experience.

This will give your squad longevity but also make your club profitable as you can sell some of your prospects when they have increased in value. Conducting transfers in this way will force you to explore alternatives to the obvious players making for a more unique Career Mode. 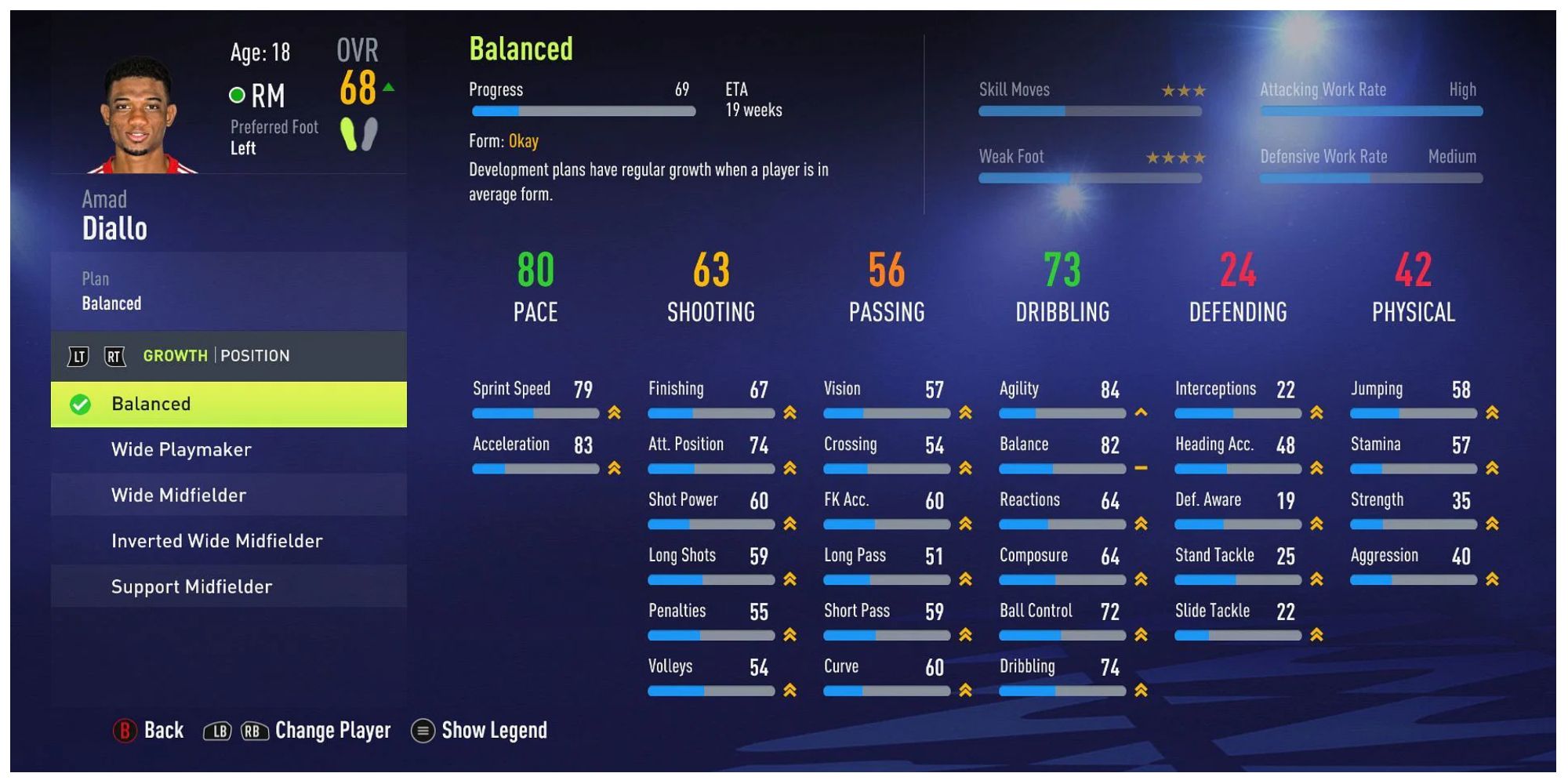 FIFA 22 has the most sophisticated player development system yet and it brings some much-needed strategic complexity to the game. Post-match training drills are now key to how your players both recover from games and increase their abilities.

It's up to you to assign which players do certain drills with each one improving different abilities like shooting or passing. There's the option to simulate training, but this will only give your players a mediocre benefit, so ensuring you play the mini-games yourself is crucial to getting the best out of them.

Perhaps even more important are the player development plans. These are long-term training programmes that run in the background to determine which statistics a player focuses on upgrading, and they can be quite nuanced. For example, you can steer a midfielder towards being box-to-box, a playmaker, or an all-rounder.

Older players can have their decline slowed by specialised plans, and there is even the option to entirely change a player's position, but this takes much longer. Investing some of your time planning these things out will allow you to squeeze every last drop of potential from your team.

Choose a Favourite Youth Player And Coach Them To Stardom 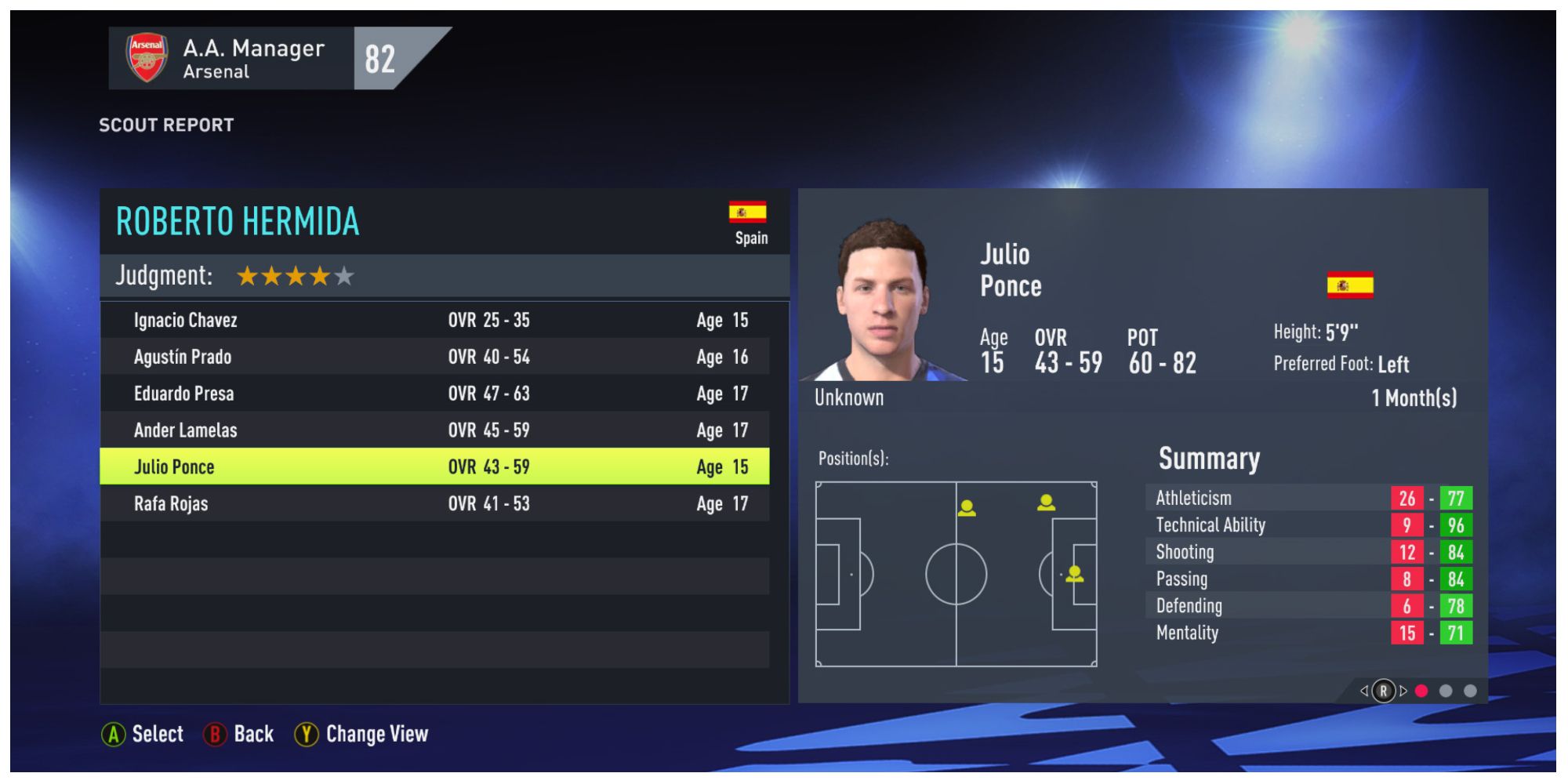 Keeping the board of directors happy is all part of the Career Mode balancing act. No matter what team you choose, one of the aims the board will set you is making a profit by selling youth players. This means you'll need to set up a network of youth scouts who will bring in monthly reports of young players.

Only those touted to reach an overall in the high 80s are worth keeping an eye on.

Picking a star youngster to focus on is a good idea. Once signed to the academy, make sure to put them on a relevant development plan straight away. Keeping them in the academy until they have a high enough overall rating to play in your first team is optimal, so don't hesitate to offer them a contract.

Now that they're in your first team squad, it's time to put them to use, letting them squander on the bench will only mean they lose rating points. If you play them regularly, they will rapidly increase their overall rating and, with it, their transfer value. Intensively developing one player like this adds another dynamic to Career Mode and ensures that you will reach the board's financial targets. 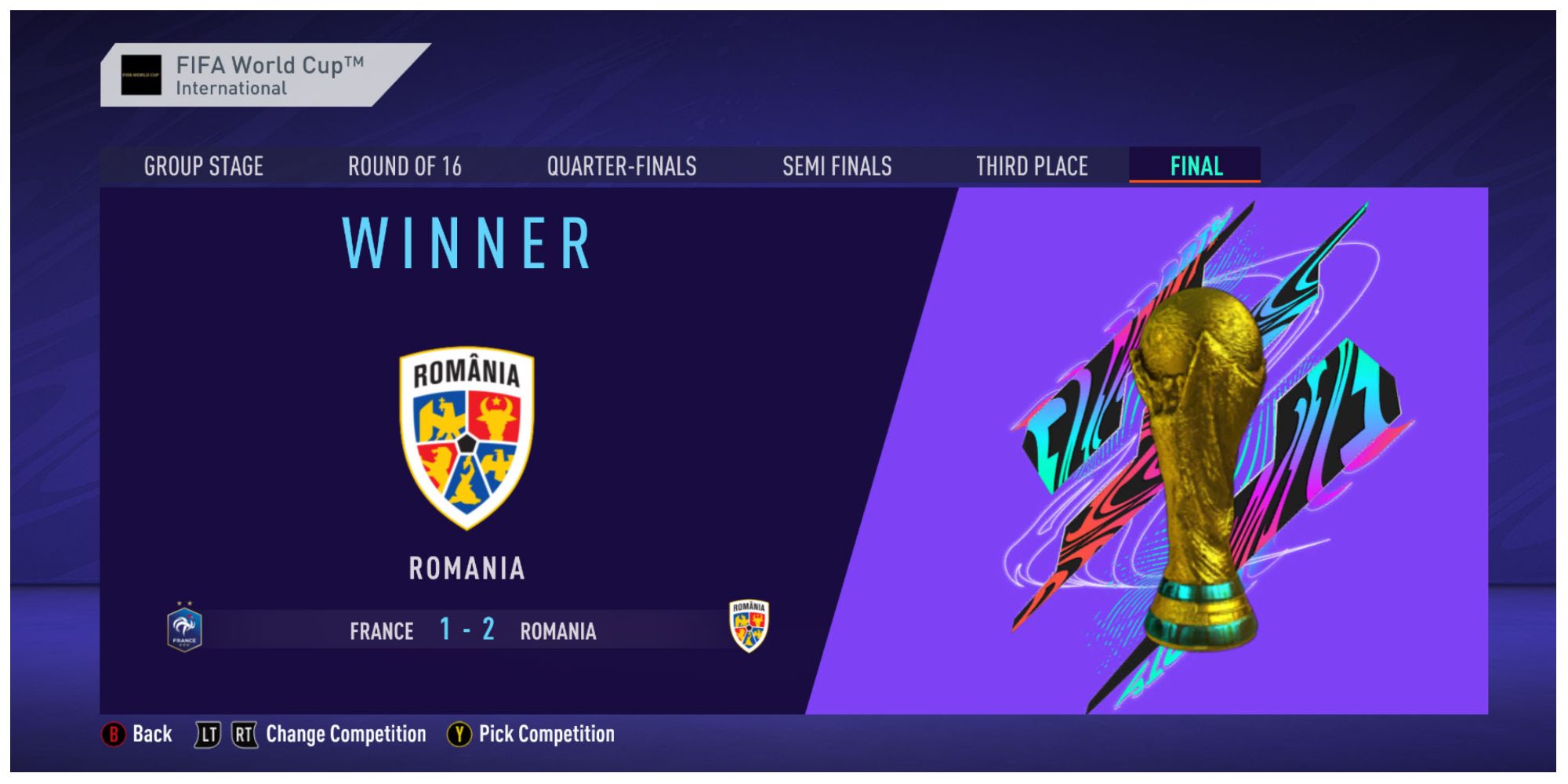 International management really spices up Career Mode in the late game when it can start to feel a bit repetitive. The excitement of a World Cup or regional tournament is unmatched, but much like choosing a team for Career Mode, picking a more obscure country will set the stage for dramatic encounters.

Any teams like France, Brazil, Germany, or Spain will have elite squads that are far better than most of the countries you will come up against in a tournament. It won't be a cakewalk, but it will certainly be less of a challenge. Instead, consider taking up a job in a country with some baseline quality but little chance of winning for a truly thrilling time.

As you progress in domestic management, national team job offers an increase in quality, so the lower-level jobs will be available before you win major domestic tournaments. This means you'll have to make a decision early on about who to manage, but the right call will make all the difference when you're looking for something different later on in the game.