During your travels across Eorzea, you might be lucky enough to hear a few notes of a familiar song in the distance. Follow the sound and you’ll see a Bard — or even a whole band — using Final Fantasy 14’s Performance Mode to create captivating music.

Whenever this happens to me, regardless of whatever I was in the middle of doing, I can’t help but track down the performers and watch for a while, and I’m never the only one. Players gather from all over to listen and celebrate the creativity of others, with crowds sometimes spanning the whole of my screen.

I’m always on the lookout for exciting community shows, and I’ve made my fair share of alts to attend specific concerts and events on other Data Centers. Yet I’m still finding new and interesting performances that blow me away. Lazy Afternoons, the Kingdom Hearts-themed bard band on Primal’s Behemoth world, was one of these gems that I stumbled across — but it wasn’t in-game that I found them, but through the FF14 community.

“I'm very passionate about the Kingdom Hearts series,” Floppy, the creator of Lazy Afternoons, tells me. “As a kid, my parents sheltered me, and they only allowed me to play Kingdom Hearts 2 because it had Disney characters on the box art. It was the very first story game I ever had the opportunity to play, and it holds many fond memories, especially the music, which is truly incredible!

“Yoko Shimomura has such a unique style when it comes to composition, and I really enjoy her music. Around the start of 2021, I set out to rearrange as many Kingdom Hearts songs as I could. I thought to myself, why not have a Kingdom Hearts band after making so many songs from the series?” 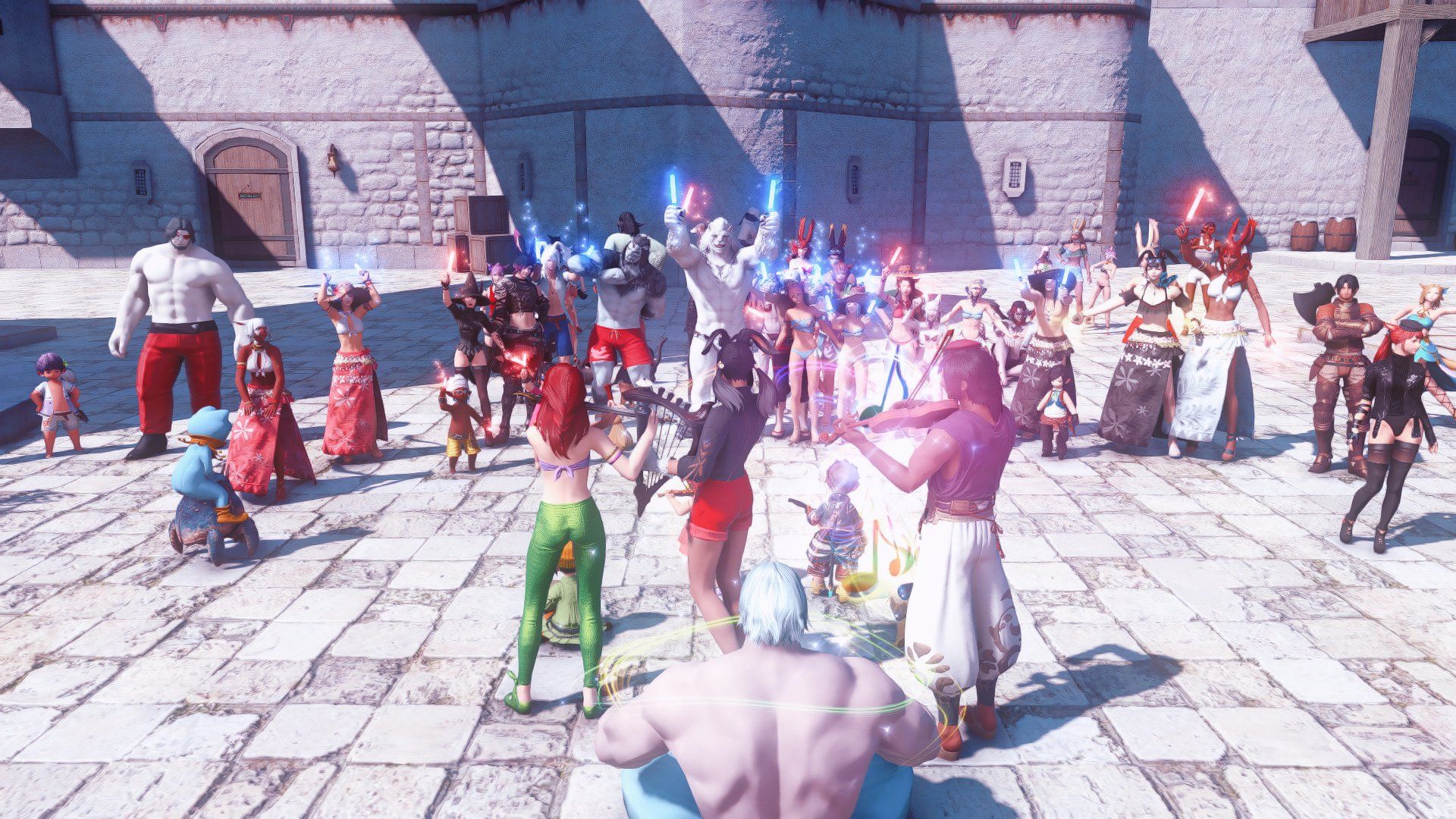 Creating music with FF14’s Performance Mode has been a hobby of Floppy’s for over two years, but it wasn’t until April 2022 that Lazy Afternoons came to be. Running eight clients to encompass the whole band requires hefty hardware, something Floppy couldn’t facilitate until very recently.

The standout thing about Lazy Afternoons is that each band member is a recreation of a Kingdom Hearts character — though with a FF14 flair, of course — and each complete with a fitting name. The little Goofy-themed Lalafell is called ‘Ah Hyuck’, while the Lalafell Donald is called ‘Donald Cure’. Considering the limitations of using FF14 clothing to create Kingdom Hearts outfits, it’s impressive how much Lazy Afternoons look like their KH counterparts, even if it’s in pint-sized versions for some of them.

“It took a few days of planning before I created the characters,” Floppy explains. “I went through many different characters such as Roxas, Naminé, and Lilo, for example, trying to come up with a funny name for them with a matching outfit. The fan favourite is Buff Riku, a friend of mine called Aina came up with the idea and had a character already made. I asked if I could use the concept in the band and tried my best to replicate him. Aina also came up with Kairi's name ‘No Screentime’. As for the other members, once I finally landed on a funny name for them, it took an entire day of searching the internet using pieces of other players' Kingdom Hearts glamours with a few small twists to accommodate the characters only being level 30.”

Lazy Afternoons wouldn’t be complete without its beautiful repertoire of Kingdom Hearts-themed music, something that plenty of FF14 players enjoy. With the recent implementation of Data Center Travel, Floppy is looking forward to sharing their music and finding the time to enjoy the performances of others while continuing to hone their own craft. 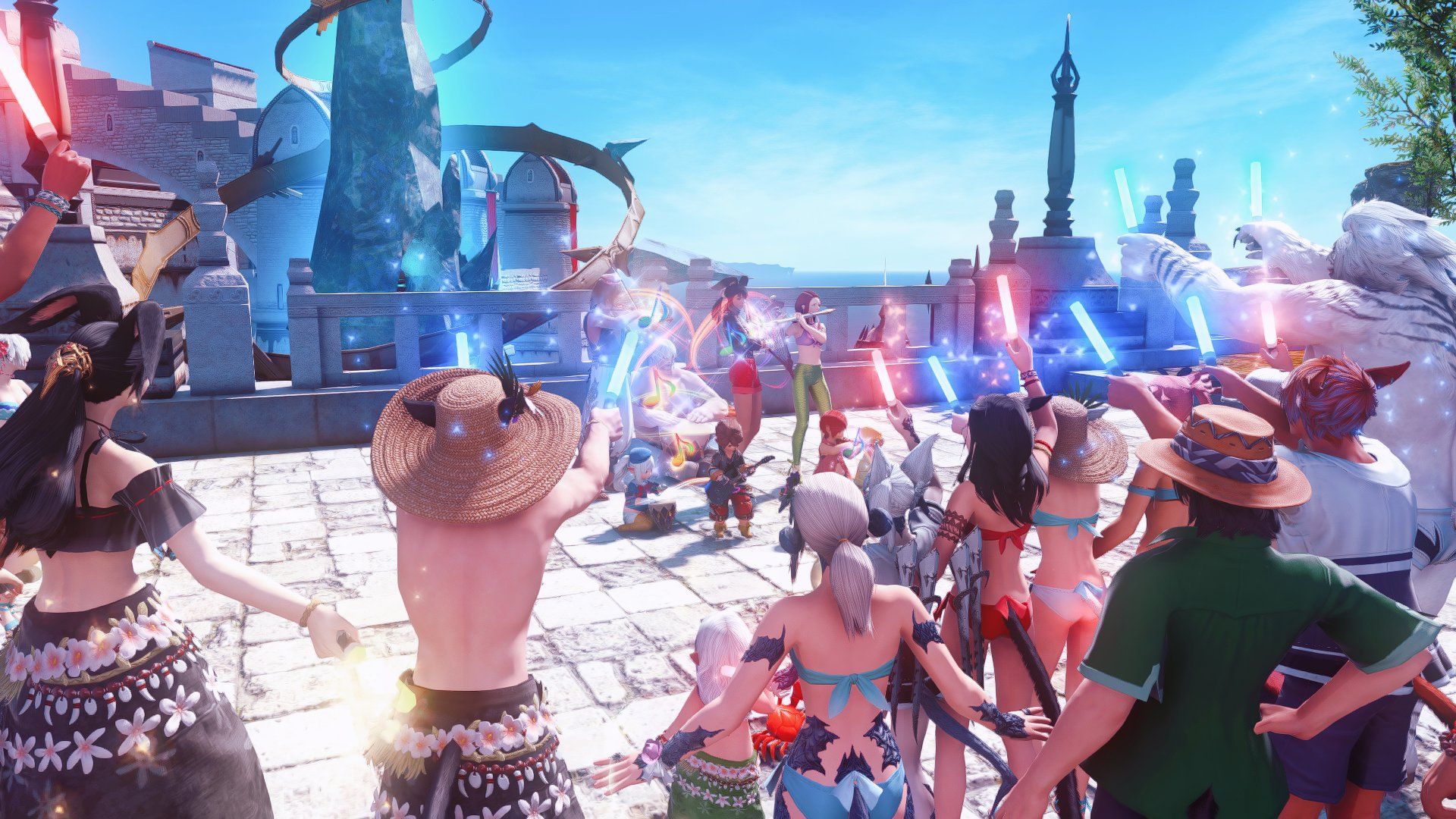 “I think there's a lot of FF14 fans that are passionate about Kingdom Hearts and music in general,” Floppy says. “Many people have stopped their adventures to sit around and listen, suddenly an hour passes, and they're still mesmerised by the music. Seeing the recent responses on social media was awesome too. It warms my heart how much people really like the band and their names.

“There are so many lovely people across different Data Centers that I've had the pleasure of meeting, not only am I excited to play on other worlds, but I'm excited to go and see others perform as well. There are so many other great bands out there with their own unique tones and songs.”

Since Performance Mode was first implemented back in 2017, Square Enix has applied various improvements and updates, such as the addition of new instruments. This has left bards throughout Eorzea living in the constant hope of additional instruments or options that might be on the horizon.

Floppy performs with Lazy Afternoons as a hobby, so they have a much more relaxed approach than other bard bands you might know, making them one of the more elusive acts to try and see.

“Most of the time, it's in the spur of the moment, and I just log them in and play somewhere fun,” they tell me. “Occasionally, you'll catch the band at places if you regularly check party finder! I have been doing this hobby for two years, and I want to thank Junk, Wiggs, and Corrin for their amazing support and friendship during this journey.”

If you want to check out more about Lazy Afternoons or even book the band for an event, you can check out their website here or follow Floppy on Twitter.