Yesterday, we all got a taste of Flintlock: The Siege of Dawn, the latest game from Kepler Interactive. However, a few weeks earlier I was able to see a preview of the trailer that was shown off at the Xbox showcase, as well as speaking to Derek Bradley, CEO at developer A44. (Almost) everything around Summer Game Fest being remote makes the industry as a whole more accessible and diverse, but there is a sense that the traditional race across the convention centre and endless roster of never-quite-to-schedule meetings of a buzzing E3 has been lost. Flintlock was, for me, a throwback. Due to some minor technical hitches, I didn't get to see the preview I was conducting the interview about until during the interview itself. This was old school games journalism baby, and we'll do it live. As a result, a lot of the conversation was just me pointing to things and saying 'that looks cool, explain it', but it was also one of the more interesting and informative interviews of my career, so perhaps I should just never bother with preparation again.

I did have some awareness of what Flintlock was before going in, however, which allowed me to prepare at least one useful question: Fantasy and guns, what's up with that?

"I was reading a whole bunch of novels set in the fantasy genre," Bradley says. "The question at the heart of this game is if we were in a Lord of the Rings type setting, except now you can have cannons and guns and things like that, would it change anything? Is that a tipping point and is it an interesting tipping point? It's just this very interesting puzzle. In our case, Nor [the protagonist] herself sticks more to the dirt under your fingernails, human side of things. And then her mysterious companion, Inky, brings kind of a lot of this dark and treacherous magic to the combo." 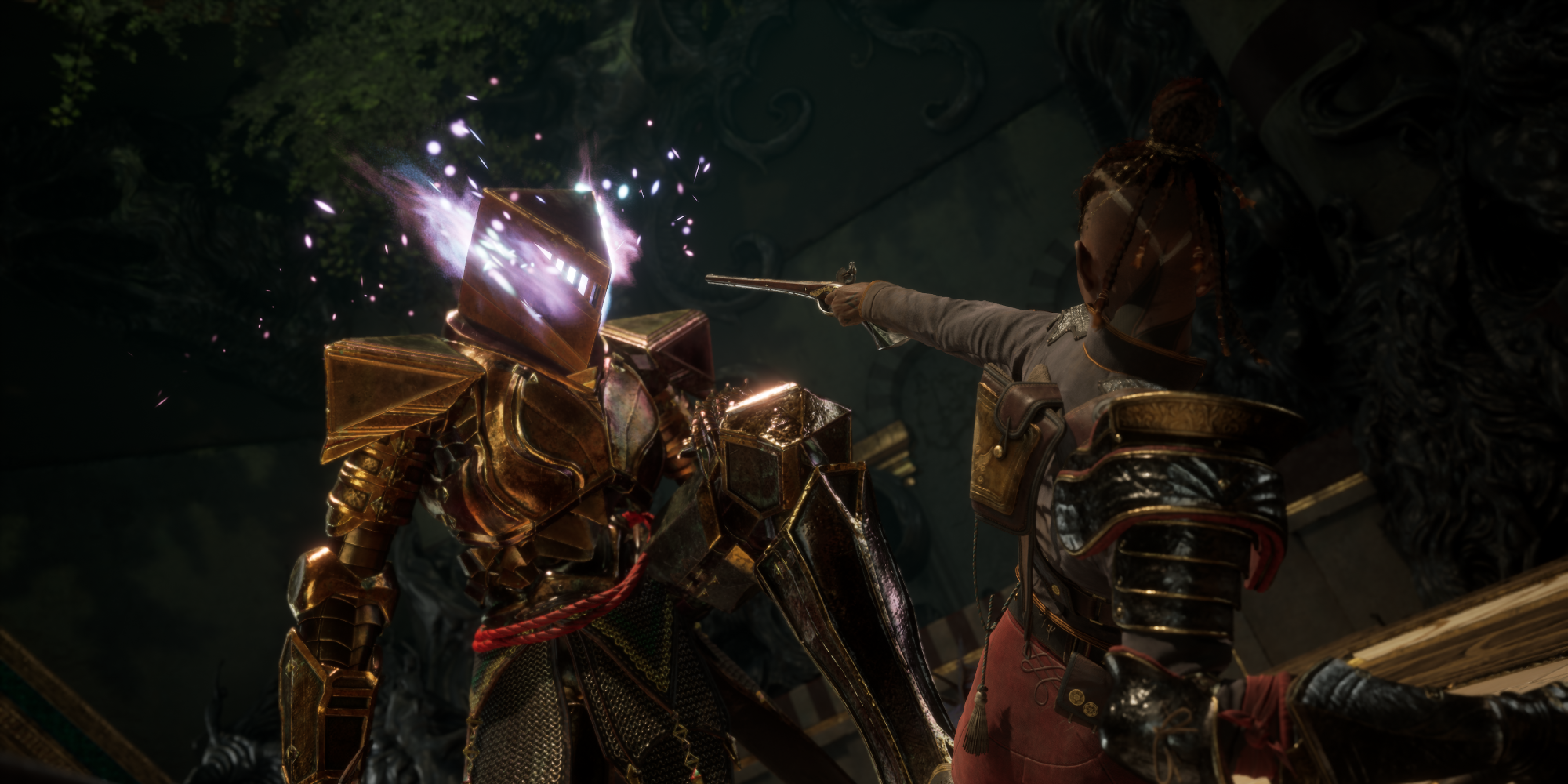 If guns and fantasy is something of an atypical mix, so is (unfortunately) Black women and video games. Though things are improving – Deathloop had two Black leads last year, Redfall's most recent trailer focused on its WoC leads – the fact we all immediately go to a handful of the same examples shows progress needs to be made. If Flintlock is a success, it will also become one of these examples, being led by Black female character Nor. I asked Bradley about this decision, and what impact he hoped it might have.

"By being more inclusive with our cast, if you will, we have a range of things that we've done across the board," he says. "I think overall, there's that intention of inclusivity. We've also got two gender neutral members of the party as well, because there are so many ways that you can do this. There's such a kaleidoscope of ways that you can tackle representation. For our gender neutral characters, we don't particularly point at either or do anything hugely political on purpose, because the thing that we want to do is to say, like, the 16 year old kid picks us up and plays it, we just want them to think like that's how the world is, and that it's completely normalised for them. Our intention isn't that it solves problems, it doesn't do everything you could possibly do. But it's another thing out there in the world that is trying to do good, and trying to do it from a good place." 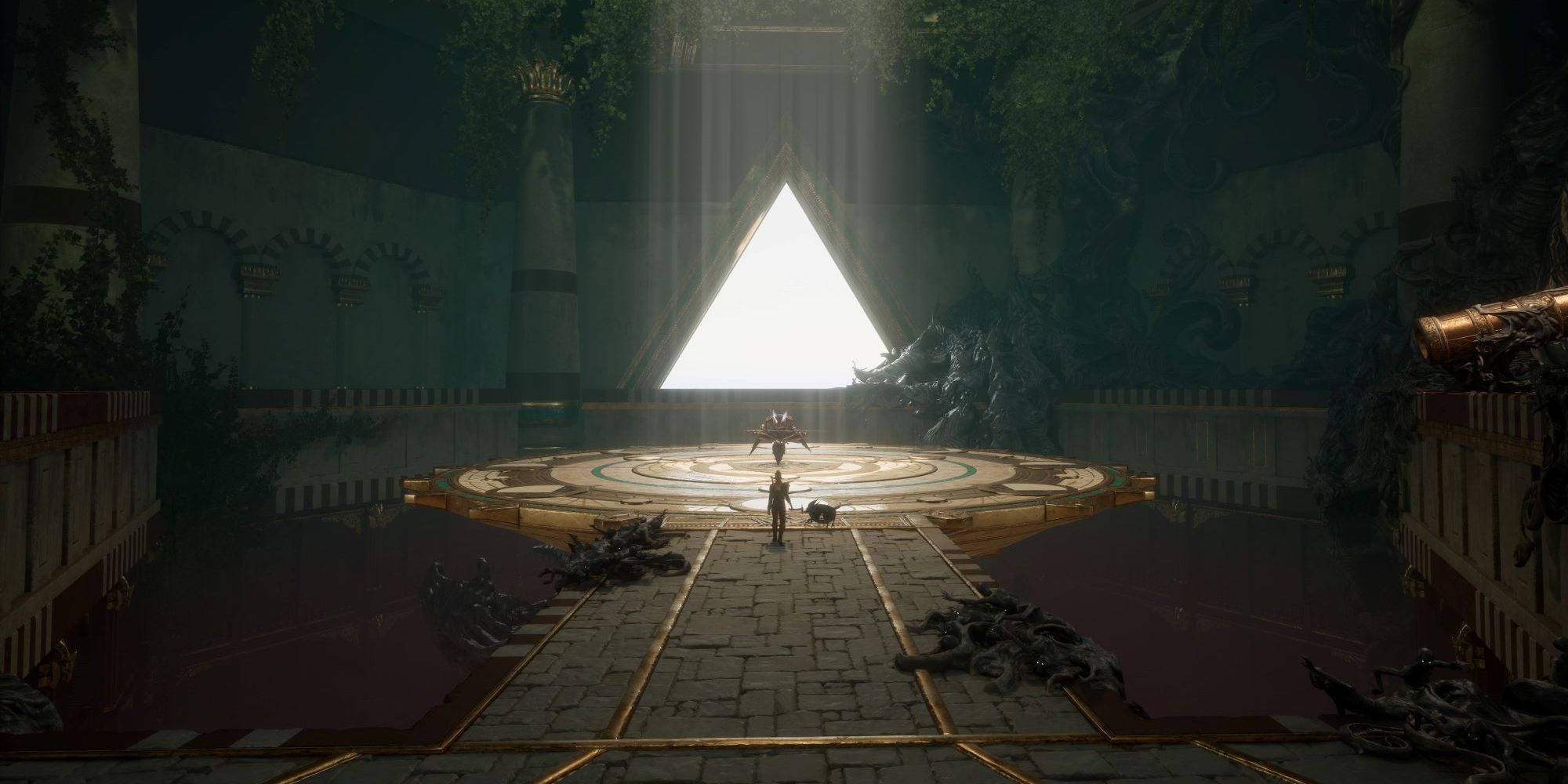 At one point in the trailer, we see what appears to be a boss encounter which instantly reminds me of the N.Tropy fight in Crash Bandicoot 3: Warped, wherein the furry marsupial dashes under and jumps over magic beams. "You use the word rhythm, which is deep to everything that we do," Bradley says. "Our combat animation is actually written out in a beat structure. We stick to a beat and for this particular boss, it is like there is a puzzle to how they move and how they shoot up beams and do all of that kind of stuff. Which leads on from our first game, Ashen. This one has a lot more platforming to it. You can throw explosives around and and explode yourself around while you're in midair, you can also use the magical powers of your companion Inky to literally fly around the world as well. You can do things like how you would in a game like Assassin's Creed, [and] be able to jump off a cliff and land a bale of hay. In this case, you actually have full control over the mechanics of how you would do that there was a little bit of skill involved to do it, that you can essentially do some quite spectacular platforming."

Talented interviewer and intelligent critic that I am, I continue my tactic of pointing to things and telling Bradley it looks like another game I enjoy. This time it's the flashes of magic used for transportation, which appear, I tell him, similar to Ratchet & Clank: Rift Apart. I'm close, he says, but I'm also wrong. "Essentially how they work [is that] they're a little bit like puzzles. You find these skulls out in the world, and your companion's able to activate them and use them to fly places. But if you're close enough to a triangle, you fly towards it. As you're getting closer to it, there are a whole bunch of options while you're on the way to it. Some of them will maybe push a certain thing upwards, another one make you go forwards, or make you stop right on it, all those kinds of things. The most important part of those for us is the theory behind how we lay them out to make engaging puzzles. Some parts of them are meant to be roller coaster rides, other parts are more head scratching like, ‘how do I get to this thing?’" 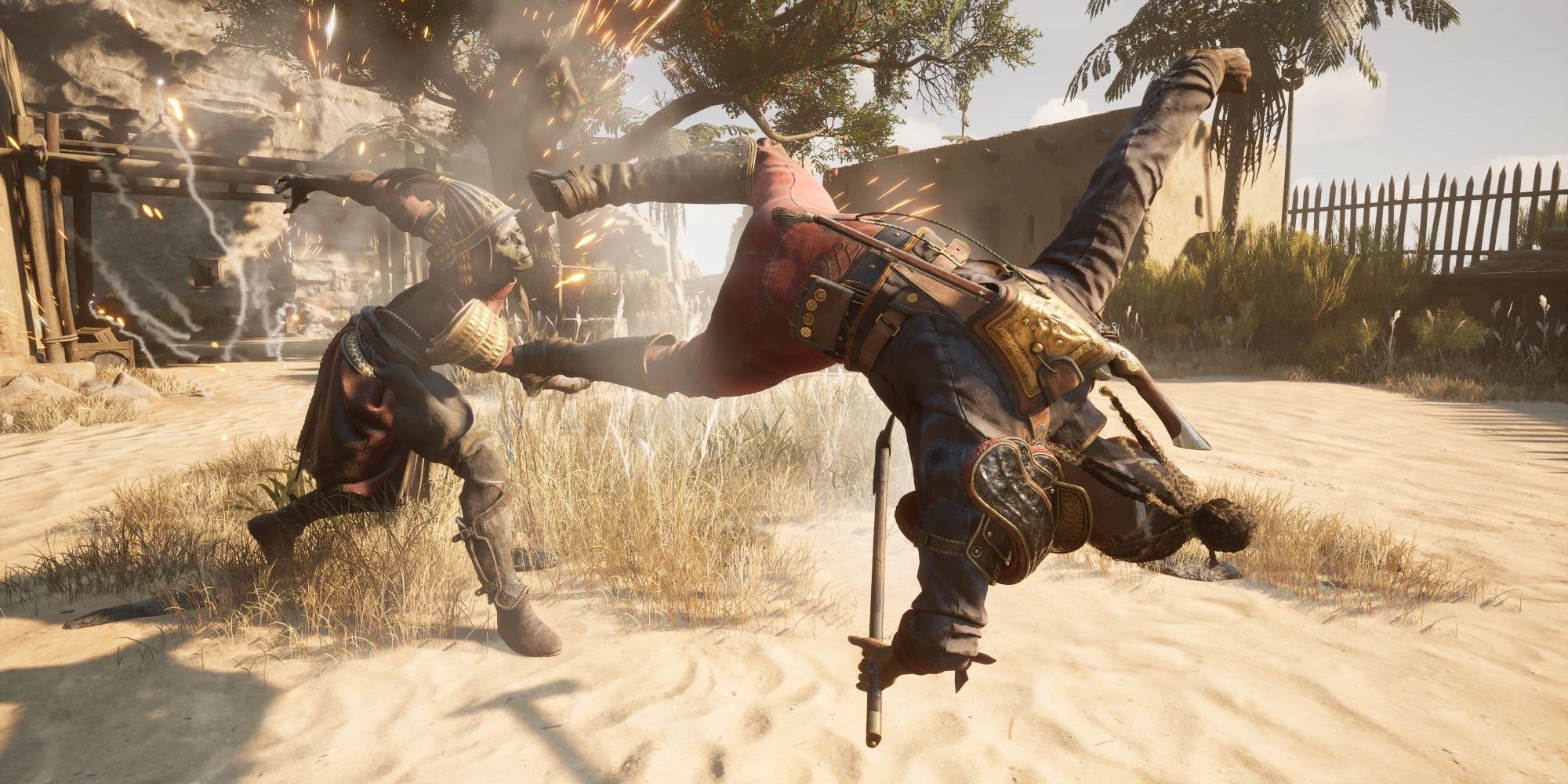 The trailer also showed off a city hub, shown at various times to be a couple of tents gathered together or a bustling throng of crowds, marketplaces, and rest stops. I assumed these were to be scattered out, waiting for us to discover them, but in reality they will grow with us, independent from our actions but linked to our progress. "I suppose if we're talking Souls for comparison, that's actually your bonfire," Bradley says. "This is a really massive bonfire. Compared to Ashen, [you] needed to do quests for your NPCs around town, and as you did that, while you were away, they would have worked on the village a little bit more, and the music around the village would also change. There was a sense of while you're doing things, your townsfolk are also doing their own things, and not just waiting on you. And there's a sense of them being alive of their own accord. That's actually what [Flintlock's hub] is, when you start the game. All you have is one companion and a campfire. You slowly gather people to your crew, and they give you all sorts of functionality, they're actually essentially a crew of settlers. Whenever you light a bonfire or find a checkpoint, you can always call them in and this whole campsite unravels around you and gets quite big and quite detailed."

Flintlock: The Siege of Dawn will launch early 2023 for Xbox One, Xbox Series X/S, and PC