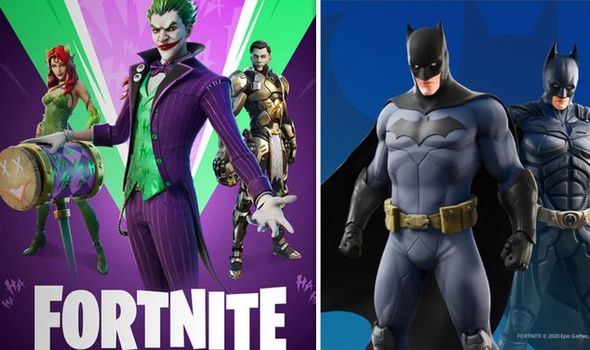 It’s all part of The Last Laugh bundle, which includes The Joker, Poison Ivy and the Midas Rex outfit.

The only bad news is that fans will have to wait a long time for the November 17 release date rolls around.

The news was announced in a special blog post by Epic Games: “Following the return of Batman, Catwoman, and Harley Quinn to Fortnite, we need to shine the Bat-Signal once again for big news coming this Fall!

“Batman’s arch-nemesis, The Joker, arrives in Fortnite via The Last Laugh Bundle releasing on November 17.

“Check out all of The Joker offerings below including The Joker Outfit, Laugh Riot Back Bling, Bad Joke Pickaxe, The Joker’s Revenge Pickaxe, and the Pick a Card Emote.”

In addition to the new cosmetic items joining the item shop as part of the bundle, The Last Laugh also contains 1,000 V-Bucks.

Interestingly, The Last Laugh Bundle has also been confirmed for PS5 and Xbox Series X. Indeed, Epic announced that it will be available in time for the launch of the next-gen consoles.

Likewise, The Last Laugh bundle will also be available in physical form, or as a digital download.

“A mastermind of chaos, The Joker is joined by adversaries old and new,” the post continues. “Gotham City’s floral femme fatale Poison Ivy is ready to plant her roots on the Island, while Midas returns with the new Midas Rex Outfit.

“The Last Laugh Bundle is available for digital or physical purchase and includes 1,000 V-Bucks. The retail version is available on PlayStation 4, Nintendo Switch, and Xbox One. It will also arrive in time for the release of the PlayStation 5 and Xbox Series X next-generation consoles.”

Epic even addresses the elephant in the room, announcing that The Last Laugh bundle is coming to mobile and PC.

“For players on mobile and PC platforms, we’ve got you covered. We’ll share how you’ll be able to purchase the Fortnite: The Last Laugh Bundle soon.”

In case you missed the news, Fortnite has been removed from the Google Play Store and the iOS App Store.

The game was removed from the app stores following the launch of Fortnite’s new Mega Drop discount scheme.

It was Epic’s attempts to bypass Apple and Google’s 30% sales tax from everything purchased through the respective app stores.

Apple and Google have since removed Fortnite from the app stores, citing a violation of its terms and conditions.

Hopefully things will be back to normal when Epic Games launches The Last Laugh bundle on November 17.