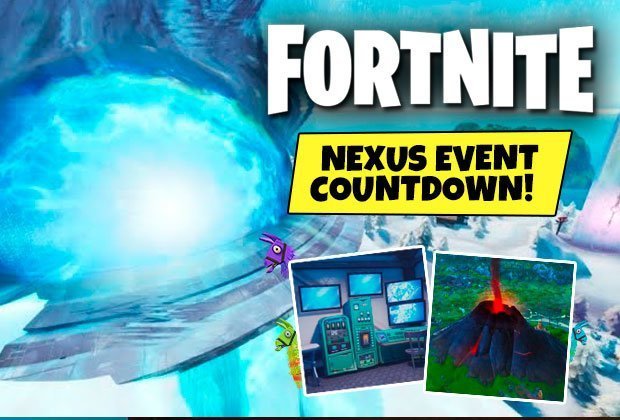 The latest Fortnite event countdown is here and – as has now become a tradition – we have another big in-game event to look forward in around 24 hours time.

This event will be the latest in a series of special timed events that shape the course of the over-arching Fortnite narrative.

Following on from past successful events such as the rocket launch that split the sky, the big cube explosion, the Marshmello gig and way more besides, Epic Games appears to have something else special up its sleeve as we approach Season 9.

For the last few days, we’ve seen runes appear all over the Fortnite map, and from the start of the season, excavations have been uncovering mysterious things on the map. The Loot Lake metal hatch is one such mystery.

Already it seems like the game is getting ready for another major surprise for fans, with the volcano set to apparently erupt – sooner rather than later.

We already seem to know a little bit about what could be coming, so let’s examine all the information we have about this event so far.

Fortnite Nexus Event – When will it start?

The so-called ‘Unvaulting’ event will start on Saturday at 3pm ET (that’s 8pm BST for those of you reading in the UK).

For anyone reading this outside the UK the times in different time zones are, 3pm ET, 8pm GMT, 9pm CET, 12pm PST and 20th January 7am AEDT.

This is according to dataminers that managed to grab information included in the in the v8.51 update files.

“A new event called “UnvaultingCountdown” started yesterday when the rune appeared on the volcano and the event ends on Saturday at 3pm ET,” notes renowned leaker ShiinaBR. “The event will most likely occur when the countdown event ends.”

That countdown ends on May 4 at 3pm ET – it’s safe to assume that’s when Fortnite’s Unvaulting event will occur.

So at least we know what’s going to happen to the Vault… but what about the rest of the map?

Fortnite Nexus Event – What is it?

There are a few things we can extrapolate from what we know of the event so far. First up, there is a Season 8 skin called Ruin – and it’ll likely be one of the last Season 8 skins available. Does that mean apocalypse and ruin is coming to the island? We’d wager that it does.

Expect that volcano to fire off some rainy lava death onto the map, folks!

Speaking of the volcano, we’re expecting the thing to erupt and take out locations like Tilted Towers and Retail Row – and possibly more. There’s speculation that Loot Lake will absorb the lava somehow and change, too, but we’ll have to wait and see what happens.

We’re also expecting a big part of the event to revolve around ‘unvaulting’ an item that has previously been stowed away by Epic.

Leaked data suggests there’s a lab inside the currently-sealed vault which leads you to an area with a desk where you’ll be able cast a vote on which item you want to appear back in the game.

This area is the same place where Kevin the Cube disappeared, so it’s an area steeped in mystery and magic.

It’s also worth noting that we’re heading to the finale of Game of Thrones and there are untouched dragon eggs on the map, and a castle buried under snow in Polar Peak. An erupting volcano could tie into both of these POIs…