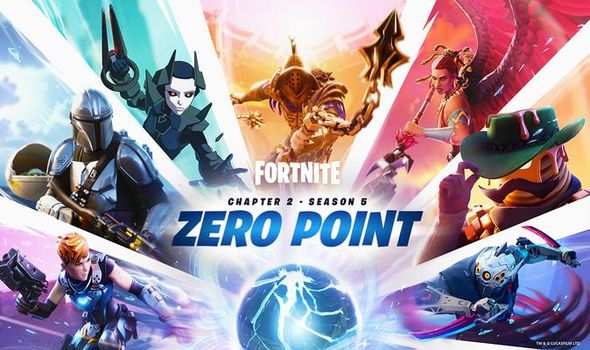 Fortnite fans are counting down to the start of Season 5, which is just a few hours away.

Where things get a little more confusing is the launch time. The in-game clock is counting down to 5am GMT (12am ET).

However, Epic Games describes this as the “prep state” for Season 5. When the clock hits 5am GMT, a new period of server downtime will begin lasting approximately four hours.

Needless to say, the server downtime launches alongside update 15.00, which must be downloaded in order to start playing the new season.

“Status: Galactus defeated! Thanks for your efforts,” reads a Fortnite tweet.

And the updates are already coming thick and fast, as Epic warns players to expect a bigger patch than usual, especially on PC and Nintendo Switch.

“During this prep state, you’ll be unable to play Fortnite prior to server downtime. Stay tuned for the adventures that await in Chapter 2 – Season 5!” reads a follow-up post.

“Note: With the launch of the new Season, patch sizes will be larger than normal on Nintendo Switch and PC.”

Judging by the teasers, update 15.0 will incorporate multiple realties. One transmission on Twitter mentions some kind of shapeshifter from another reality named Maeve. A second character by the name of Condor has also been teased by Epic Games. Expect more teasers throughout the night.

While the patch notes are yet to be revealed, update 15.0 will include multiple map changes, a brand new Battle Pass, new weapons and a fresh batch of challenges.

Priced at £9.99 a month, Fortnite Crew subscribers will always have access to the current Battle Pass.

It’w worth pointing out that these rewards will only be available to subscribers, and won’t ever be sold as standalone items in the shop.

Fortnite Crew subscribers will also be given 1,000 V-bucks a month to spend on cosmetics.

You can check out the Fortnite update 15.0 early patch notes below. Express Online will update the article when new information is revealed.

– Available from the Fortnite item shop where it costs £9.99 a month

– 950 V-bucks, or available with the Fortnite Crew subscription. Contains 100 levels and rewards

• New weapons – to be revealed at 5am GMT

• Impossible to bind the same key to different actions with Keyboard.

– We are currently investigating an issue with binding different actions to the same key on keyboard.

• Multiple actions’ names are missing from the Custom Controller settings.

– Multiple actions’ names are missing from the Custom Controller settings.

– When playing Fortnite, players cannot create system-level parties that include players on both PS5 and PS4.

• Difficulty editing Banner with a controller.

– The Banner menu may be unresponsive to controller inputs, causing players to have difficulty editing their Banner with a controller.

– The Banner menu may not properly apply players’ icon changes, instead saving a different icon than what the player chose.

– The sound effect of certain actions, such as opening a Chest or hitting a Weak Point, may be delayed.

– Players will have to reform their party to continue matchmaking if an unreadied party member is removed from the party.

– Cars do not consistently damage objects or players upon impact.

– Mouse Acceleration on PS5 and Xbox Series X|S is inconsistent and faster than intended.

• Widow’s Light Back Bling is not visible with Effects set to Low.

– We’re aware of an issue causing the Widow’s Light Back Bling to be invisible when Effects are set to low under graphic settings on PC.

• Huntress Outfit appearing as Ramirez or another Outfit.

– We’re investigating an issue that is causing the Huntress Outfit to display as Ramirez or another Outfit while in the Lobby and in a match.

– We are investigating voice chat issues for players on Android devices.

– Motion controls on Nintendo Switch may become unresponsive/stuttery when aiming at or near a target, making it difficult to aim accurately.