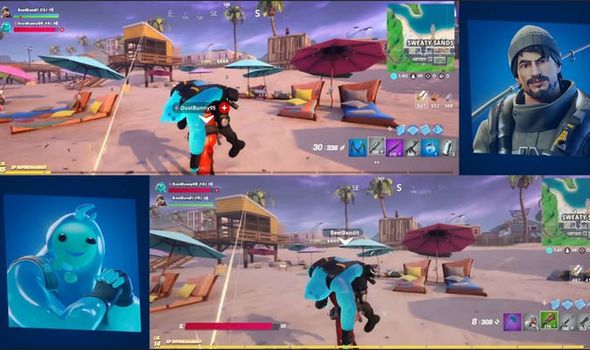 It looks like Fortnite Split Screen is here to stay on PS4 and Xbox One, and the good news is that Epic Games has made it easy to use.

What’s more is that plenty of gamers are looking for the easiest guide to follow on how to set it up with a friend.

This can be seen through the daily Google searches, which keeps the term: How to Split Screen in Fortnite, in the top ten trends for the game.

The good news is that Epic Games has made setting up Split Screen in Fortnite very easy and should make it a fun thing to do for all players.

There are some drawbacks to the current system and it should be noted that Epic Games has only made it possible to use on a few devices.

This means that Fortnite Split Screen is currently only available on PS4 and Xbox One and isn’t an option for Nintendo Switch, Mobile, or PC gamers at this time.

The Switch seems like a good fit but it’s hard to say at this point whether the feature will be shipped to that platform in the future.

A message from Epic Games explains: “Play Duos and Squads with a friend on the same PlayStation 4 or Xbox One.

“This is an early release of Split Screen; we will continue to improve the feature. Please report bugs via the in-game feedback tool.”

As mentioned above, Fortnite Split Screen mode is currently available to use on PS4 and Xbox One.

Split-screen makes it possible to share your TV screen with a friend while Duos and Squads.

This means you will have to share the screen, which gets cut in half horizontally. And as you can imagine, this makes Split Screen easier to use on bigger TVs.

To set up split screen mode in Fortnite, gamers will need to have two compatible controllers, and they will also need two Epic Games accounts.

When it comes to using the feature on Xbox One, one of the chosen accounts will need to have Xbox Live Gold.

But it doesn’t appear that both will need access to this, which is good news for Microsoft fans.

The same problem doesn’t exist on PS4, as Fortnite does not require a PS Plus account to play.

Another limitation is that Fortnite gamers only be able to play Duos or Squads, as Split Screen Mode doesn’t allow gamers to share a screen in Solo Mode.

Gamers will then need to choose which account they want to log in as they usually would on the start screen.

After going through these steps, you will need to connect the second controller and select to log the second player in by holding down a button on their gamepad.

As an example, the option will be found on the bottom line of the screen on PS4, prompting players to hold the X button.

After the second player joins the lobby, you can switch control of the menu screen between the two accounts.

This will allow for player 2 to change their skins, view replays and check out the stats screen. For now, Fortnite Split Screen remains in beta, meaning it is not supported in Creative Mode or LTMs.

This new Split Screen functionality is still pretty limited, and Epic Games haven’t said how they will be expanding it in the future.

Nothing has been mentioned about pushing this to Fortnite Save the World, or any other modes currently available in Battle Royale.

Creative Mode seems like the next logical step for Split Screen, but we will need to see what Epic Games has planned in 2020.