What happens when you distil the essence of old-school RPGs—the grand quest and posturing about saving the world, the wandering about in the forested wilderness, and the sometimes overwrought combat system—into a single game? You’ll get Franken, a charming little 16-bit RPG that infuses both the highlights of the genre, as well as the absurdity of more recent fare like Earthbound and Undertale, into a miniature, hour-long experience. Despite its smallness, Franken is an odyssey to remember, squeezing as much endearing yet largely meaningless babble, and all other manner of hogwash, into its short journey.

The game cuts to the chase too–well, after a long, scrolling marquee of exposition that details the not-so-wretched setting of this universe, anyway. In short, the province of Fentinsenark has been thrown into turmoil, with the lands now overrun by monsters and threatened by the looming presence of the dreaded Hell’s Knight, and you’re supposed to defeat him before all is lost, yadda yadda—you know, all that jazz. But don’t let this wall of text stop you; upon stepping foot in this hallowed lands, you’ll soon make quick work of the monsters in the vicinity. Combat merely comprises a single 'fight' button, with HP succinctly represented by pixelated hearts. In fact, one of the features of the game is said to be “the most rudimentary battle system imaginable”, and it’s true; there’s no other unnecessary flourishes involved, like magic spells or mana or whatever. Plus, victory comes with clear rewards: with every battle won, you’ll simply level up and deal more damage.

Monsters, too, are also your garden variety baddies like slimes, crabs, and corrupt knights. And then there are the tiny towns you can visit, occupied by denizens who are far too caught up with their own pithy affairs to comprehend the world-ending catastrophe that’s close to befalling these lands. As you go about exploring the rest of this seemingly archetypal kingdom, you'll also carry out all the rigmarole of RPGs, such as equipping yourself with better weapons, interacting with every object you can lay your hands on, and recruiting powerful companions, in order to progress through the tale. 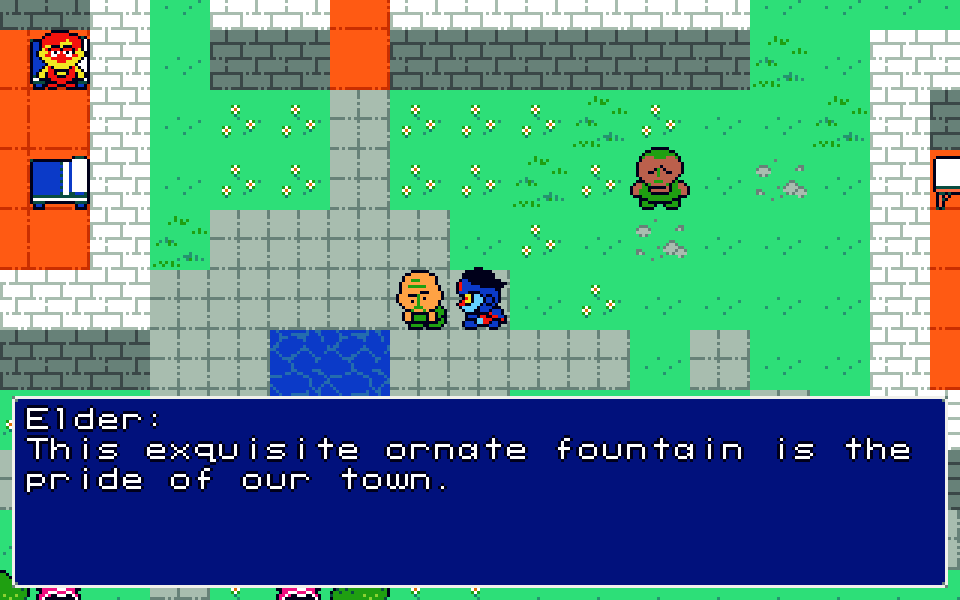 At first glance, Franken doesn’t seem to bring anything particularly new to the retro RPG formula that remains so popular today, but the game is actually banking on one thing—your knowledge of the genre and all its trappings—to bust its biggest twist yet. Before you know it, Franken is throwing one meta joke after another at a dizzying pace. You'll listen to an unnecessarily long monologue about the centuries-old curse that plagues Fentinsenark. You'll watch the cartoonishly evil antics of the Hell’s Knight as he tries to thwart your heroic plans of knocking things about with your sword. You'll frantically try, but eventually fail, to speak to a persistently inaccessible sprite, whose very presence is taunting you from the corner of the map. And when you think Franken can’t toss any more jokes at your expense, it then serves its biggest, funniest punchline yet—one that's of epic proportions—in the game's concluding chapters. Then another one, and another one. This might sound like sheer exaggeration, but Franken is one of the funniest games I’ve played so far this year.