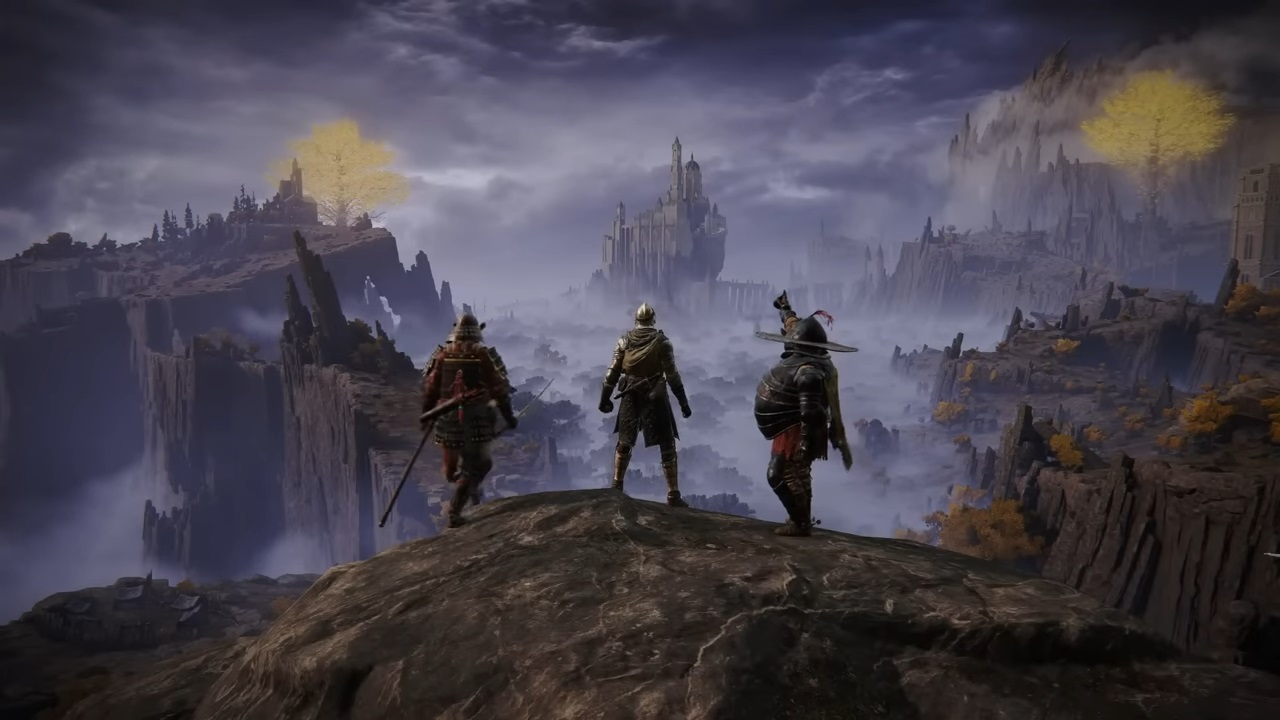 The Monday letters page has trouble believing the latest Switch Pro rumours, as one reader fails to see the appeal of Skull And Bones.

Postcards from the Land Between
I’ve just beaten Elden Ring and, like everyone, I’m in awe of just what an amazing game it is. I really want to discuss some of my favourite parts but obviously I can’t because of spoilers. I am curious though, to know what everyone’s favourite area is?

I think most agree that the last one is a bit of a letdown but my favourites are stuck between Leyndell, Royal Capital and Caelid. Celid is the closest the game gets to the horror tones of Bloodborne and is really oppressive all the time; disgusting too with its pustules and lakes of poison, and horribly mutated animals. The music is also really horrible, in a good way, and much more distinctive than anywhere else.

I think the capital is my favourite though. Even the build up to it, with the massive battlefield is amazing, but when you get inside and you realise the scale of it, and that you can go everywhere you see, is incredible. All this and it still has all the intricacy of previous From games and some very unexpected shortcuts.

The whole game is a fantastic achievement and while I’ll now be starting on New Game+ I hope a DLC announcement is coming soon, because I already want more.
Golem

It’s happening again
It seems like we’re just going round in circles with all these Switch Pro rumours. They were convincing before and nothing ever came of it. These new ones seem pretty believe too but why are they any more likely to be true?

The only somewhat compelling evidence is how little Nintendo has scheduled beyond Zelda but Nintendo being who they are I don’t think that’s enough to say they must have more hardware. For no reason, they have been just as secretive in the past and this could just be that. Especially given how badly their development has been affected by the pandemic.

I’m not saying the Switch Pro isn’t happening but this is one rumour I’m not going to believe unless I see some hard evidence, and considering that never happens with Nintendo I’ll just wait and see, and not expect anything.
Mike

Bring a friend
In case anyone wants to help new players or players that have hit a wall in Elden Ring you can. It doesn’t matter what level you are on as the game downgrades your level to the level the summoning player is at. As long as your summoner has a decent weapon level yours is around the same. It won’t affect your magic as you should be able to keep using your spells.

I’d also recommend the Jellyfish as it’s tanky as hell and poisonous to most bosses. Dragon rot breath is also a massive help and melts a lot of enemies’ health bars. One last thing, if you’ve been to Volcano Manor and progressed enough, Bernthal will more or less solo the Godskin Duo.
Bobwallett

No hype
Why is that I’m not hyped for practically any game nowadays and the reveals, of new projects or trailers, are either boring or just fodder? I understand that a game such as God Of War Ragnarök will be met with excellent fanfare, but I don’t see Sony massively marketing this project and that’s absolutely odd.

Several remakes, such as The Last Of Us Part 1, which doesn’t serve as a major improvement and is marketed at £70. Starfield has been shown and it looks terrible on Bethesda’s dated engine and I’m a huge fan of Skyrim, minus those damn spiders. But it looks divisive, for lack of a better word. But I’m honestly failing to even care for any of these new releases and it looks to me, that aside from Ragnarök, Sony has basically nothing interesting and neither does Xbox.

Elden Ring is great for the fans and the community, but it’s not as good as Bloodborne and it’s massively overrated. It just doesn’t click and I’ve had a better time with the remake of Demon’s Souls. Maybe 2023 will be a great year for gaming, but 2022 has been definitely one of the worst years in gaming.
Shahzaib Sadiq

No more monopoly
I couldn’t disagree more with the Reader’s Feature about Microsoft buying Sony. This would create an effective monopoly in the AAA console space. Microsoft could price at any level they want, implement any level of DRM, like they wanted to at the start of last gen.

There would be no competitor to challenge them in that market segment, with the Switch really doing its own thing. It would be the worst thing to happen to us as consumers. I would go as far as to say I would like to see the Activision deal blocked in the US and a precedent set that no platform holder can ever purchase a whole publisher. I get being fans of our boxes, but we should be more focused on our rights as consumers.
Robert Fulton

Together again
Interested to see that both Terminator and RoboCop have new games coming out. It’s sad to see such massive franchises reduced to low budget fare like this but if the people involved are fans and can spin a good yarn then I’m interested.

It occurs to me that both series have done pretty well over the years, in terms of video games, and unlike most movies have more good than bad. I’m a little surprised there wasn’t a game based on the first Terminator back in the day, but RoboCop was turned into a game straight away – in fact I’d say the popularity of the coin-op went a good way to cementing the series’ pop culture credentials.

For Terminator I think my dream game would basically be Alien Isolation but with robots. Problem with that is I don’t know how you’d make that work if it was set in the modern day (or the 80s!) and not have it quite restrictive.

RoboCop, I think would be better as an open world game, where you’re literally just being a cop and there’s a bigger story that starts to come in as you’re solving ordinary crimes. I don’t know if this new game will have that kind of scope though as you’d probably need a pretty big budget to get that to work.

Oh, and obviously, both dream games would build up to the ultimate crossover: RoboCop versus Terminator!
Cristo

Amiga forever
The Kickstarter for the Amiga documentary Episode 1 successfully raised £64,377 by Sunday morning. The goal for the Kickstarter was £20,000, so they beat it by a long way!

They completed all the stretch goals too, which doesn’t always happen on every Kickstarter. Look forward to getting my physical copy.
Andrew J.

Singular focus
As upsetting as I’m sure it is for fans, I have to say I was glad to hear that Rockstar are winding down support for Red Dead Online and cancelling, or at least delaying, plans for any more remasters. In other words they are finally getting into gear for GTA 6.

It goes to show you that even a giant company like Rockstar has limits and clearly these other projects were becoming a distraction and needed to be put to one side. This is why I think concerns about Naughty Dog having too many projects on the go at the moment are valid, especially when nobody even wants the remake or multiplayer games in the first place.

I think a lot of people underestimate the length of time a big game takes to make nowadays. Five years is a bare minimum now and I’m sure GTA 6 is going to end up to have been 10 years or so when all is said and done. The Elder Scrolls 6 too, based on when they announced it. I think some developers even underestimate how things are taking. Five years is a long time in anyone’s life and you start adding in delays and suddenly you’re talking the best part of a decade.

I have little doubt that GTA 6 will be worth the wait but a part of me regrets the cost of it all, in terms of Rockstar not being able to make anything else. Never mind remasters, there’s no table tennis games or The Warriors tie-ins, no Max Payne 4 – nothing. I can only hope that maybe the remasters and Red Dead Online have been sidelined to allow another non-GTA game, but I’m not holding out much hope.
Burgerman

Inbox also-rans
Is there anyone that’s excited by Skull And Bones? Everytime I hear at it, it just sounds like a more boring version of Sea Of Thieves. And now it doesn’t even have on-foot combat?!
Wrex

I’m not sure I believe that EA wanted to keep Skate 4 a secret. I think they wanted the alpha testers to leak the footage just to drive up interest. It worked too, I’m interested.
Benson

This week’s Hot Topic
The subject for this weekend’s Inbox was suggested by reader Campbell, who asks what upcoming game are you most looking forward to?

We’ve just passed the halfway mark of the year, and what few not-E3 preview events there were are all done, so what upcoming game are you most excited about at the moment, whether it’s coming out this year or not?

As long as the game has been officially announced you can talk about anything you like, but do explain why it’s caught your imagination and what more you’d like to know about it before it’s released.

What are you most looking forward to in the second half of 2022 and how bothered are you by the smaller number of releases, compared to previous years?