It’s been a while, but they’re finally back! Games Workshop has re-launched a new range of Battleforce box sets for their industry-leading Warhammer 40K wargames.

Games Workshop has announced a new range of Battleforce boxes for their tabletop wargames, Warhammer 40,000, and sister title Age of Sigmar. The ‘army in a box’ has been a fan favorite over the years, but has been absent from their product line for a while.

The return comes just in time for the Holiday season and makes an ideal gift – assuming they match up with your plans for tabletop domination. New players will appreciate the convenience of buying all the essential troops needed to build a new army, all while saving a few bucks. For those of us who already have a fighting force, the new boxes are the perfect way to add reinforcements to your army, or even lay the groundwork for an alternative.

Hot on the heels of the 9th Edition Indomitus Launch Box, the Space Marines are first to get their own Battleforce. Tagged as an Interdiction Force, the impressive roster of 23 units includes a Captain in Phobus Armour, ten Infiltrators/ Incursors, ten Reivers, and Invictor Tactical Warsuit, and an Impulsor transport. That comes to a maximum of 695 points on the table. 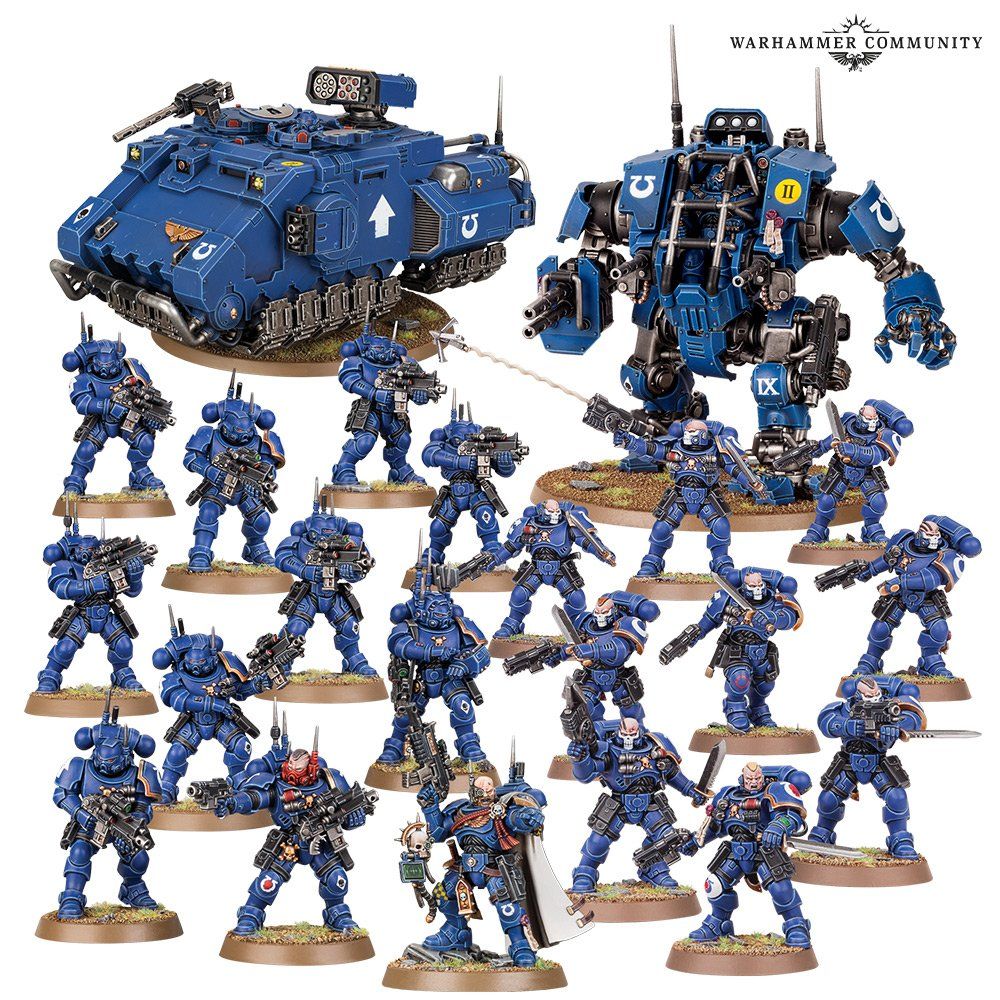 Also Supporting the Space Marines is the Primaris grav-tank ‘The Gladiator’. It joins its siblings the Impulsor and Repulsor and further cement the move away from track based vehicles for the Space Marines while bringing a more heavily armored and equipped vehicle to their ranks. Now fully enclosed, unlike the Impulsor troop carrier, the new vehicle can be equipped with minimal weaponry while still providing the utility of transporting troops and a more heavily armored version that sacrifices the troop-carrying ability to lay down aggressive fire. 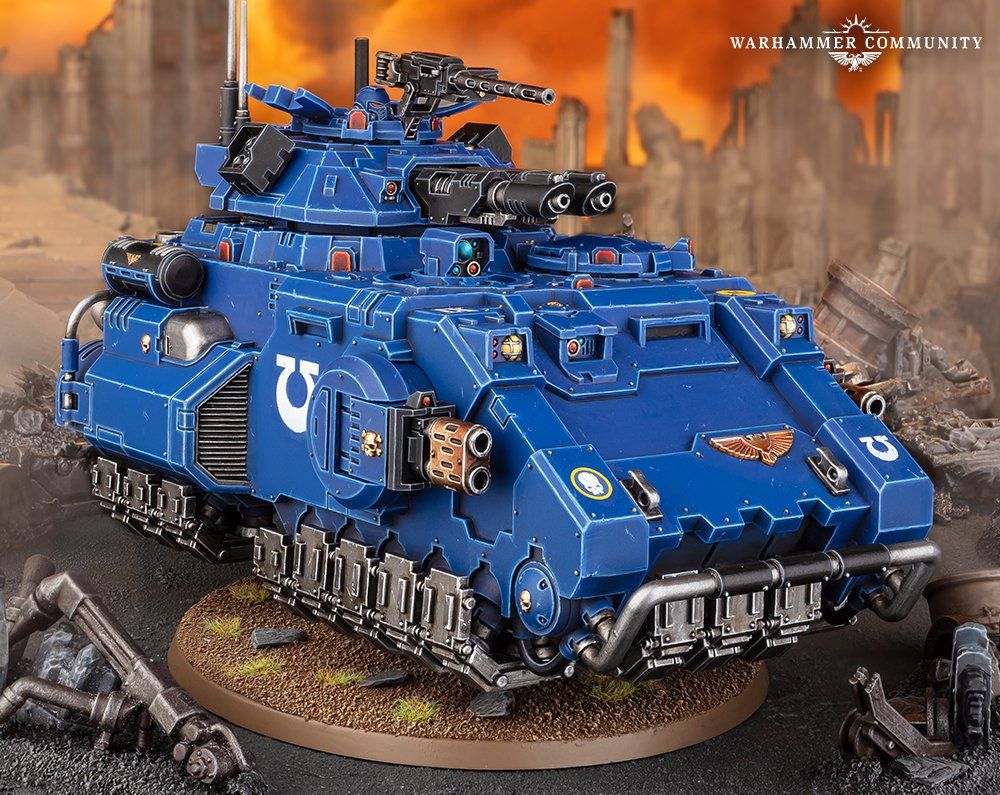 GW has also shown us the next Combat Patrol release – Blood Angels. This is the perfect kit for Combat Patrol Games and comes with five Intercessors, five Infiltrator/Incursors, three Aggressors, An Impulsor, and a Primaris Librarian. Couple this with Space Marines Battleforce and you will be well on your way to a domineering Blood Angels army! 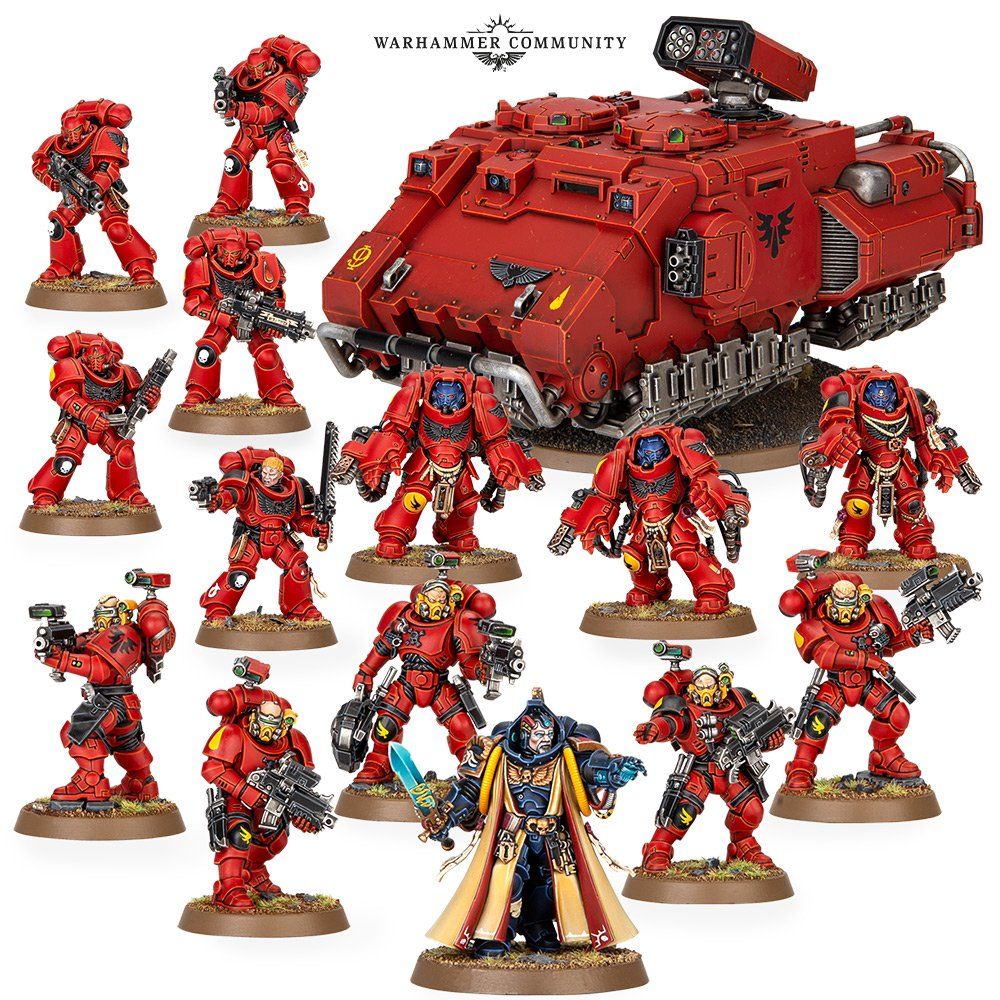 The revamped Necron minis were a big draw for many when 9th Edition released, bringing many former players back to the game. The new Eradication Legion Battleforce has 27 units including ten Warriors, five Immortals/Deathmarks, five Triarch Praetorians/Lychguard, A Canoptek Spyder, Triarch Stalker, a Doomscythe/Nightscythe, and a Technomancer. The combined unit cost totals out in the region of 835 points. 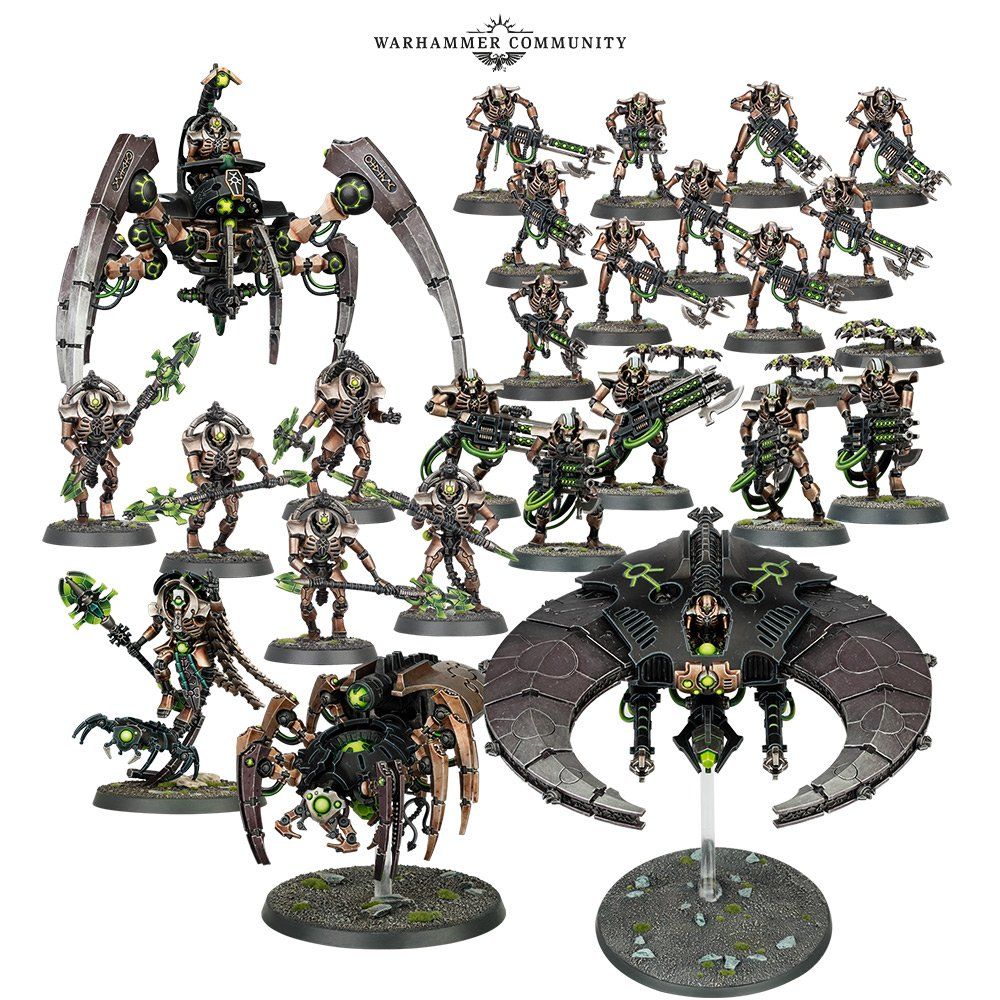 The new Battleforce box for everyone’s favorite Imperial Guard has a hefty unit count of 31 units including two tracked vehicles, The Chimera and a Hydra/Wyvern. Rounding out Bastion Platoon there is a Sentinel/Scout Sentinel, 20 Guardsman, a three-man Heavy Weapon Squad, and a Command Squad. As noted on the Warhammer Community site, these would also be a good foundation for kitbashing a Genestealer Cults army. The points cost for fielding this set comes to around 400 points. 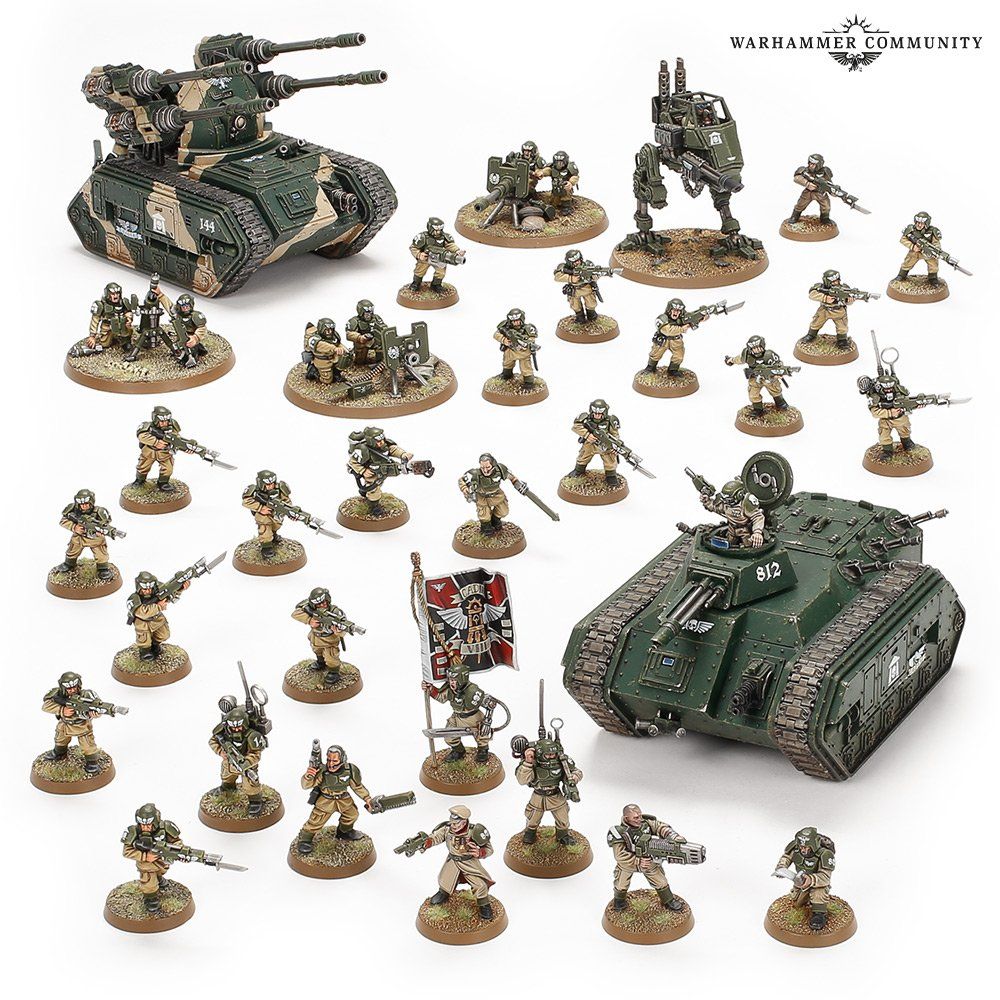 The Chaos Space Marine Decimation Warband is dominated by the Maulerfiend/Forgefiend that towers over the included troops. The included Chaos Lord leads the charge with ten Chaos Space Marines, five Havocs, and five Chaos Terminators rounding out the count to 22 units worth approximately 625 points. 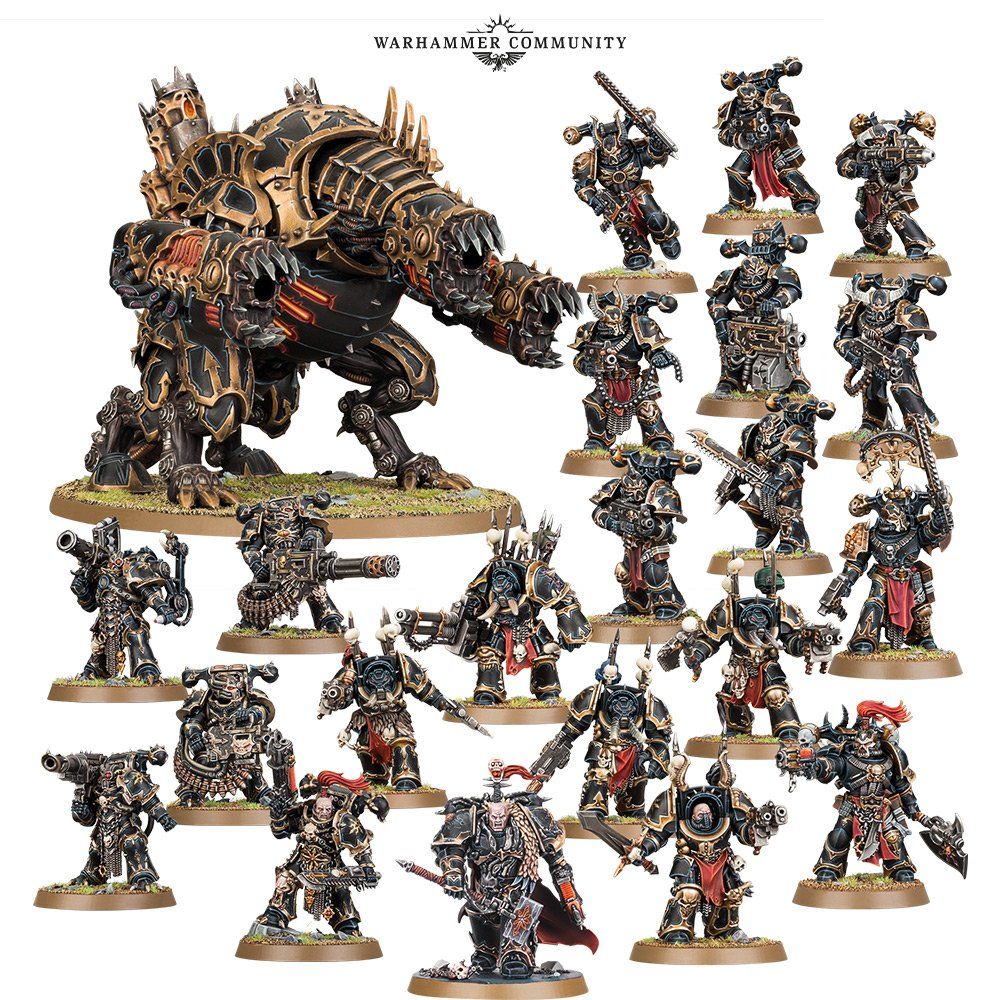 The T’au Empire is another faction that many fans have felt deserved a little more attention. Whether the new Battleforce Starpulse Cadre is enough to sway the naysayers, but the inclusion perhaps betrays some of GW’s release roadmap. This set has the highest unit count, with no less than 41 units with an approximate point cost of 650. You will get ten Fire Warriors, ten Pathfinders, three Crisis Battlesuits, one Broadside Battlesuit, a piranha, and a Commander. Oh, and drones… lots of drones. 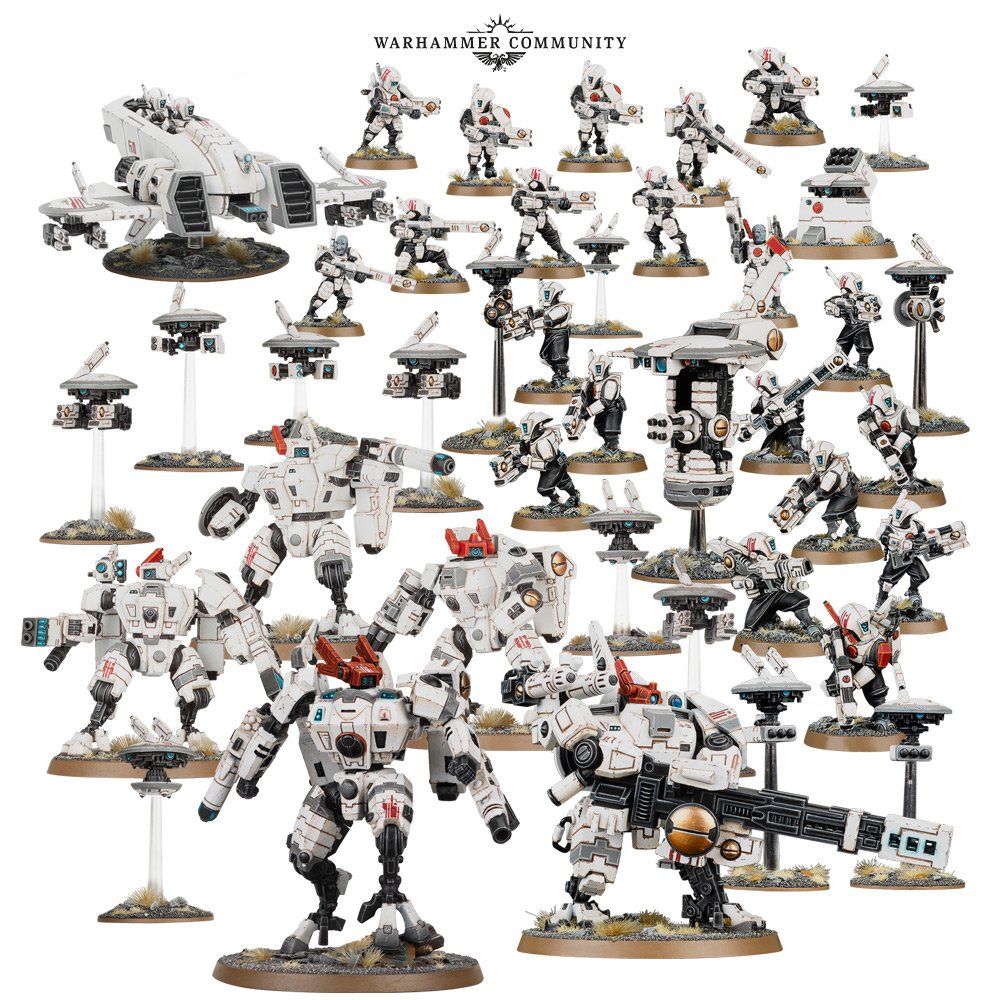 The Brood Swarm Battleforce features one of the most iconic of GW’s creations – the Genestealers. They’ve been a part of 40K since the beginning, and as the game has grown, so has their lore. They’ve also been a standard affair of pretty much every Tyranid army, but have seen little change to their miniatures. Opinion may be divided on this, after all – why change a good thing? The sixteen Genestealers are joined by ten Gargoyles, three Hive Tyrants/Tyrant Guard, an Exocrine/Haruspex, and a Hive Tyrant/The Swarmlord. This brings the Brood Swarm to about 850 points. 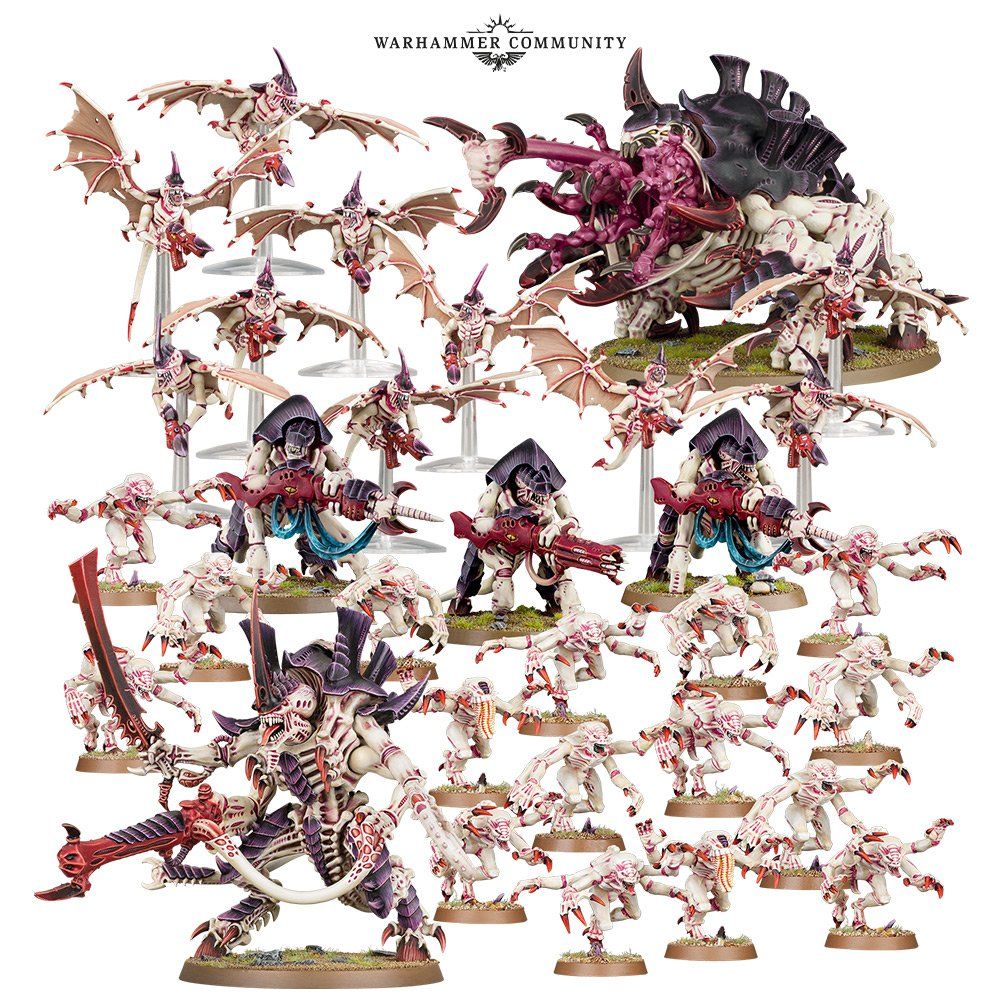 Battleforce boxes are carefully balanced to provide great variety and utility on the field of war. Their strength lies in part with the variety of units included. More often than not, a particular unit provides the same build configuration as the individual retail counterpart. Any leftover parts should be saved and added to your bits box; you never know when you may need a part for that epic conversion!

The return of the Battleforce kits this year has caused a lot of excitement, but it would have been nice to see them rolled out for all the factions. Hopefully, this is a sign of things to come. For the moment at least, we still have the start collecting and combat patrol boxes to keep us going.