Everything in the world of Genshin Impact is based on different types of reactions, and it always felt a little incomplete because Dendro didn't have any presence in the pool until the Version 3.0 update. In this update, different Dendro reactions were added alongside a new main region, Sumeru.

Before this, reactions were significantly straightforward, and you wouldn't have to strategize around them too much. But, Dendro changes this completely as Hoyoverse has added a new depth and the reactions are carefully detailed. One of these reactions existed in the game from the very beginning.

How Burning Works In Genshin Impact 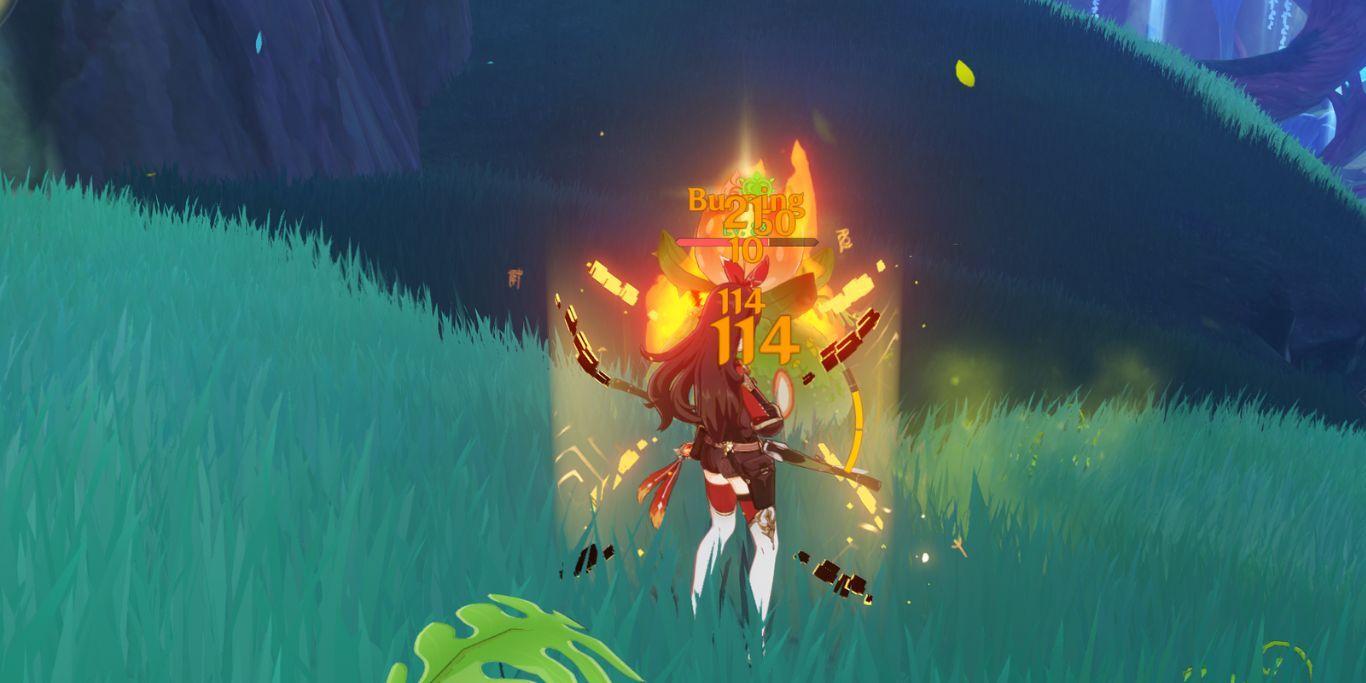 This is the only reaction that existed in the game from the beginning. The Dendro slimes would stay under the ground until you hit them with a Pyro attack, which caused Burning. At one point, this reaction used to deal a ton of damage to your character, besides the enemy.

While you could still have the Burning effect without Dendro, the application of Dendro from a Samachurl made it last a lot longer. Knowing all this, a lot of players were excited to be able to use this reaction themselves, but it was nerfed once again before the release of Dendro.

Burning is triggered whenever you apply Pyro to an enemy that already has Dendro applied to it. This is pretty easy to identify as the enemy has flames all over them and they take multiple instances of Pyro damage every second. It can be a good supportive damage reaction.

Burning goes away pretty fast, and to keep an enemy in this state, you have to apply a lot of Dendro to them.

How Quicken Works In Genshin Impact 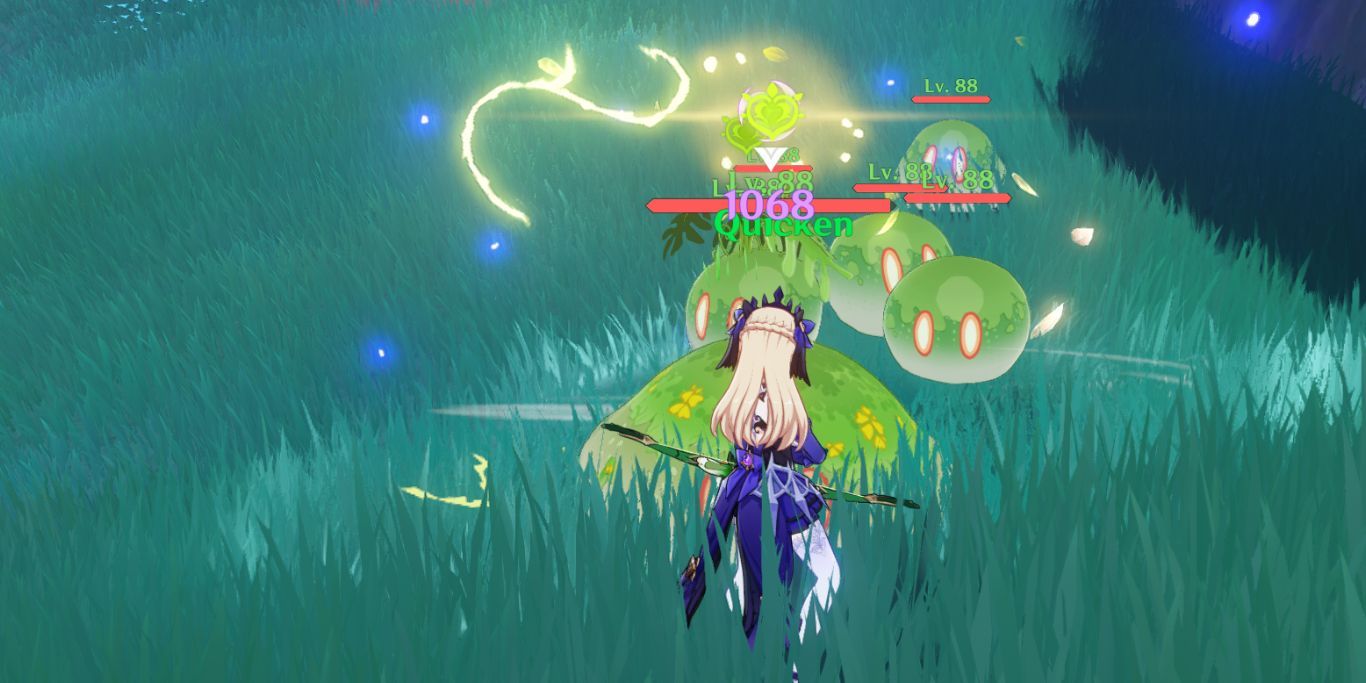 One of the reactions added to the game in Version 3.0, Quicken is triggered whenever Dendro meets Electro. This reaction can be applied in both ways, and it doesn't matter which element is applied first. Quicken doesn't do a lot by itself, but it is one of the strongest reactions because of what follows. 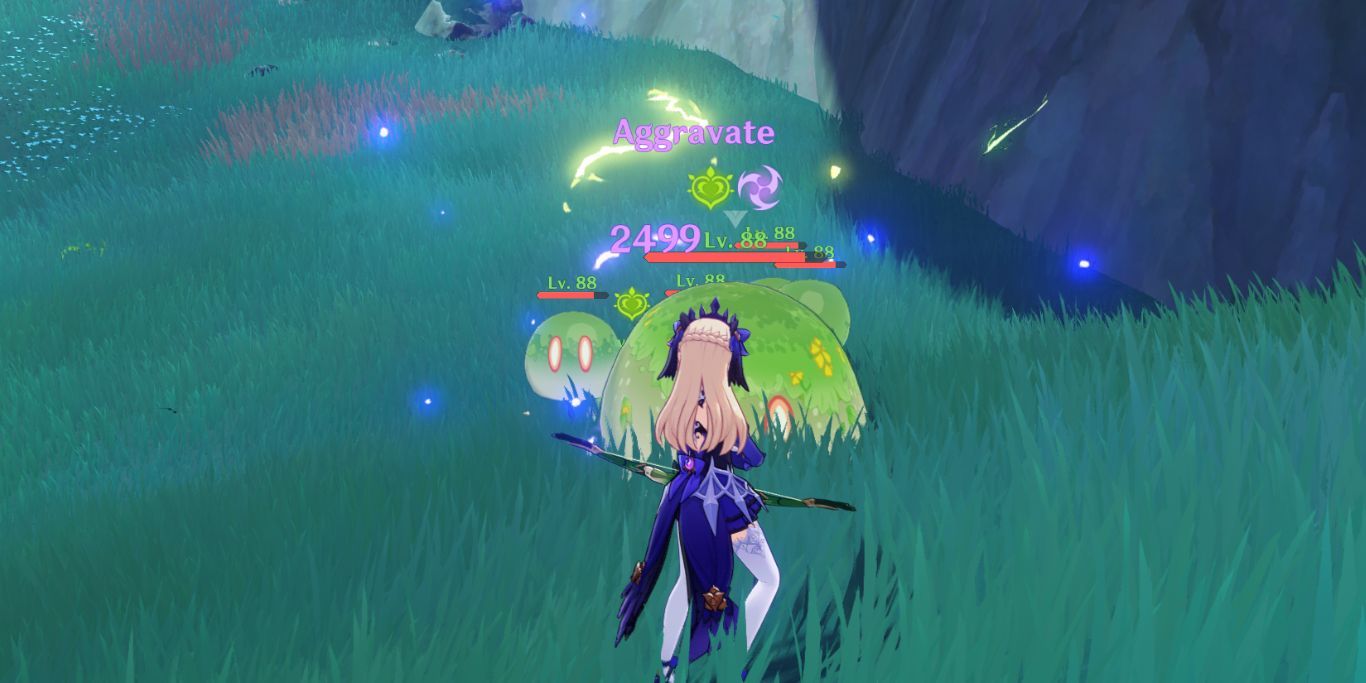 Once a target is quickened, you can apply Electro to it once again to trigger the Aggravate reaction. Once this reaction triggers, your next Electro attack will have increased damage based on the Elemental Mastery of the character. This damage buff is significantly high, indirectly buffing Electro heavily. 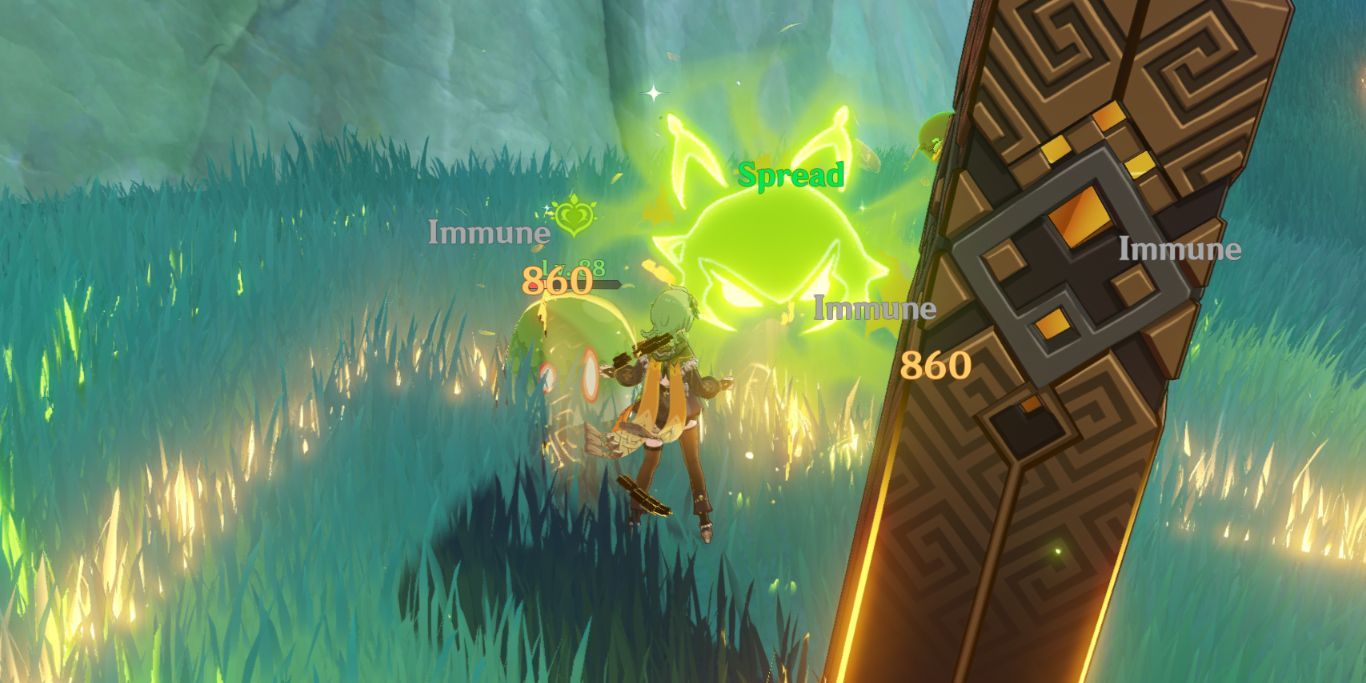 Similar to Aggravate, Spread can be triggered when you apply Dendro on a quickened enemy. This increases the Dendro damage dealt to that enemy, and it has a slightly higher multiplier than Aggravate.

While these reactions can constantly increase your damage from a certain element, some of these attacks have an in-game cooldown of 2.5 seconds before another reaction triggers, which also applies to these.

How Bloom Work In Genshin Impact 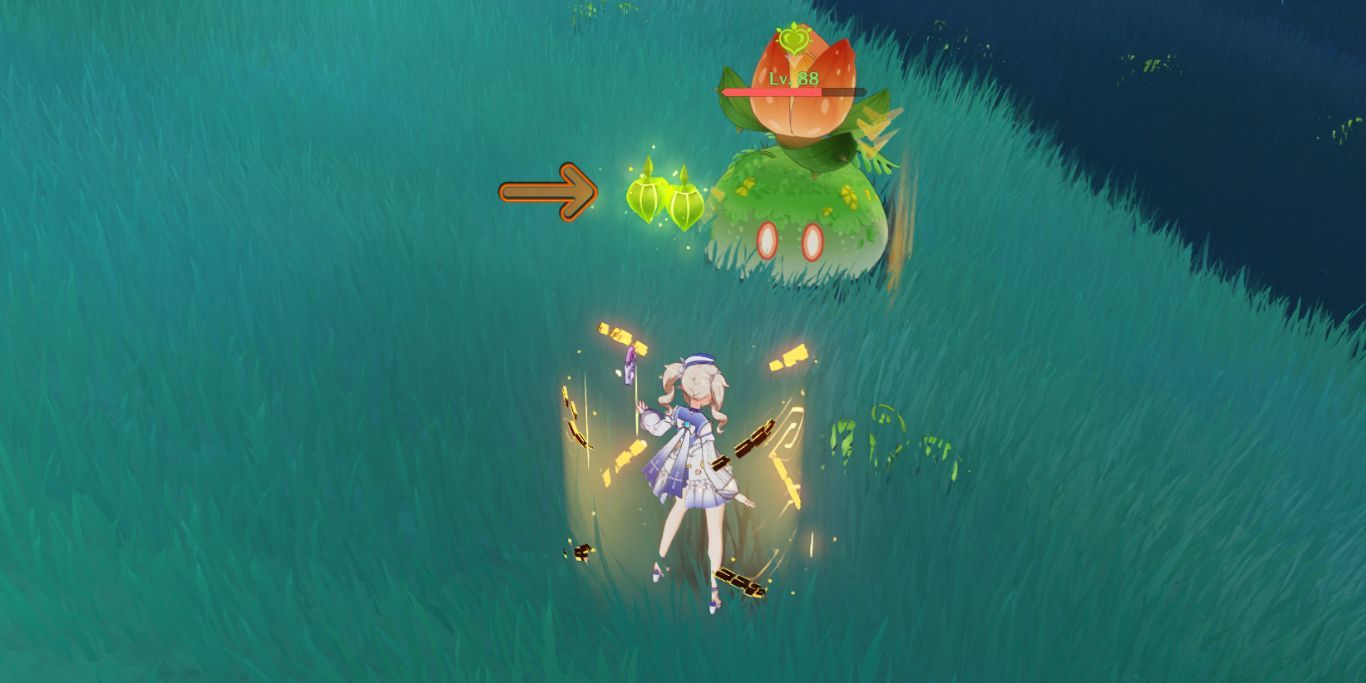 This is the most interesting reaction in Genshin Impact as it's the only one that spawns an entity that can be further interacted with. Bloom is triggered when Hydro meets Dendro, and it spawns a Dendro seed on the ground near the target that has multiple functions. 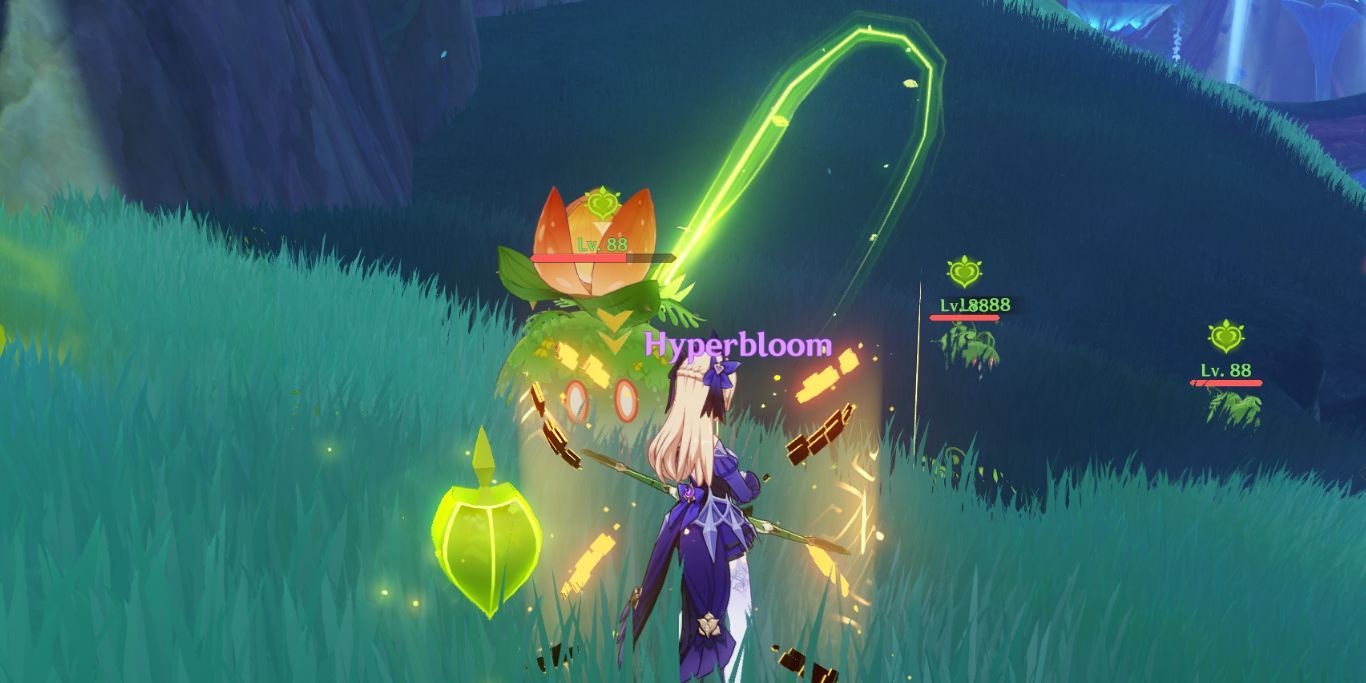 As mentioned above, the seeds formed by Bloom can be interacted with to activate more different kinds of reactions. If you apply Electro to the seed, it triggers Hyperbloom. When this happens, the seed will fly to one of the enemies around it and deal Dendro damage. 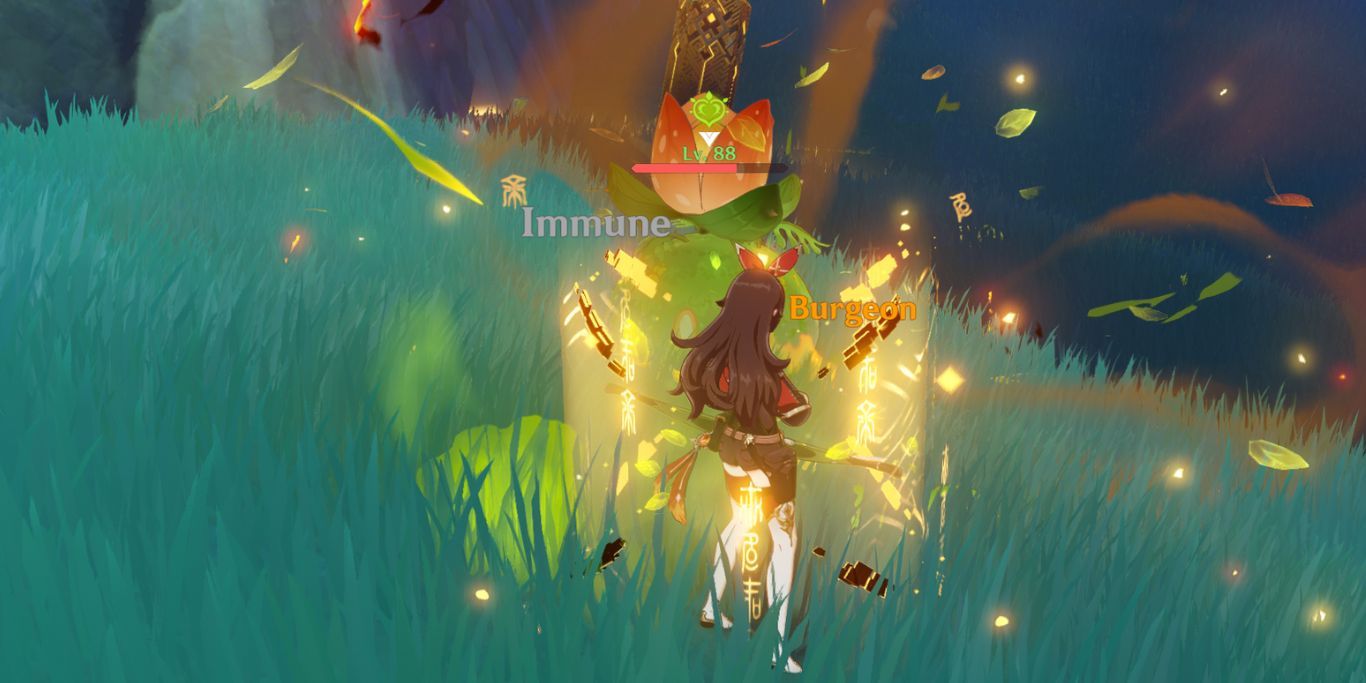 Similarly, applying Pyro to the seed triggers Burgeon, during which the seed blows up dealing more damage in a larger area than it would have if it exploded normally. It is important to note here that this will also deal damage to your character, even though it'll be much lesser compared to the enemy.

While Hyperbloom might seem worse against Burgeon, it deals a lot more damage to a single target and doesn't deal damage to your own character, which is great for characters like Hu Tao or Kuki Shinobu who need to stay on low health. 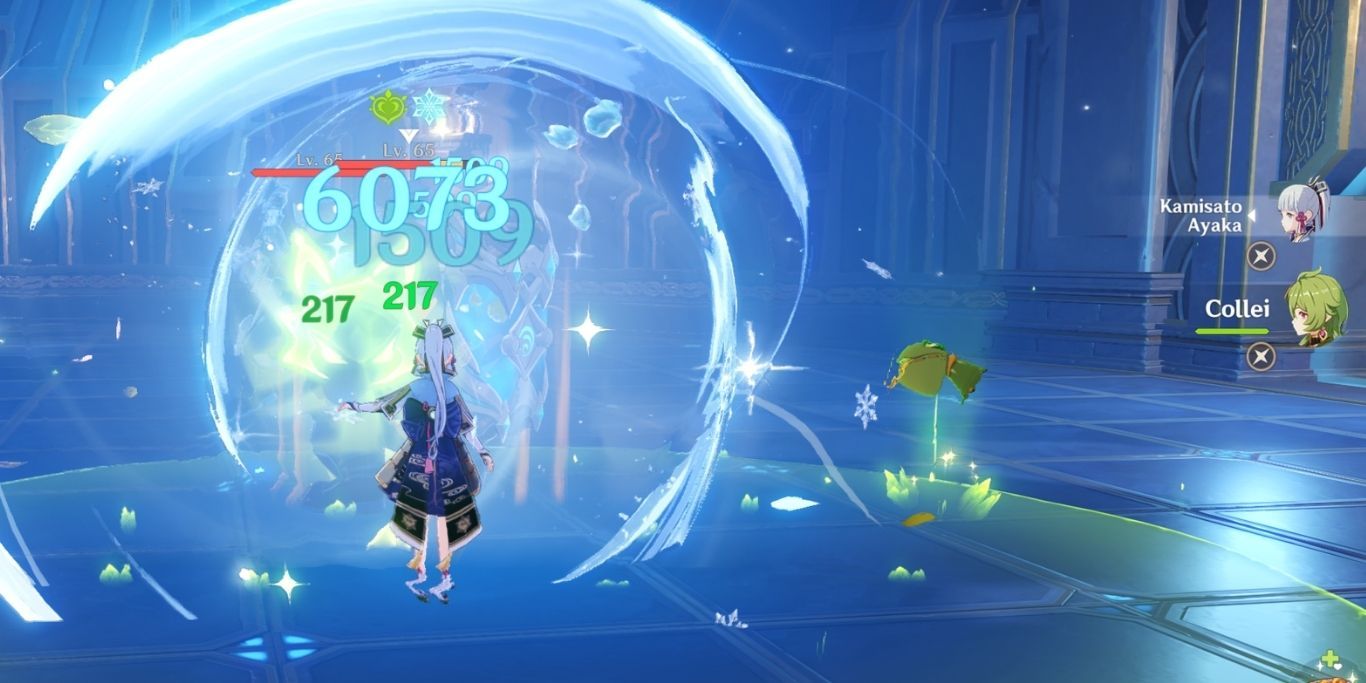 While the reactions mentioned above are very detailed and completely different from anything we've seen in Genshin in terms of reactions, there are a few that actually don't have any reaction with Dendro. The first in line is the Cryo element, which is very surprising.

Whenever you deal Cryo and Dendro damage at the same time, you will simply see raw damage from the two elements, and there'll be no reactions. This makes Cryo and Dendro teams completely useless because the game is balanced around reaction-based damage.

Further, Anemo and Geo are the two elements that have the same reaction with every single element, except Dendro. There is no Swirl or Crystallize with this element. If you're using a mono-Dendro team, characters like Kazuha are not that useful in them anymore.

Swirling an element with the Viridescent Venerer artifact set also gave some elemental resistance reduction, which is not possible with Dendro. Further, you can't gain any crystallized Dendro shield either.