Sure you have magical abilities in Genshin Impact, but you can only use them every so often. Your primary method of dishing out pain to all those monsters who dare cross your path will always be your trusty weapon, and there are a ton to choose from in this massive title. Not only do they all have different star rankings, but every individual one comes with unique passive buffs for the character wielding them. While it does somewhat vary based on what role you want each of your characters to play in the party, there are a few weapons that completely outclass the rest in their respective categories. If you want to know which ones to hunt down and which others are total scrap, take a look at our Genshin Impact top tier weapons guide.

This list will give you an idea of some of the best weapons for different weapon types in Genshin Impact right now, but it should be noted that this game is poised to use a long-lasting games as a service model. While these may be the best weapons in the current version, new weapons could be added, or stats adjusted, to alter the tier list. Also, due to the gacha mechanics of the game, most of these weapons — or at least the five star rated ones — will only be obtainable by spending Wishes on rolls. 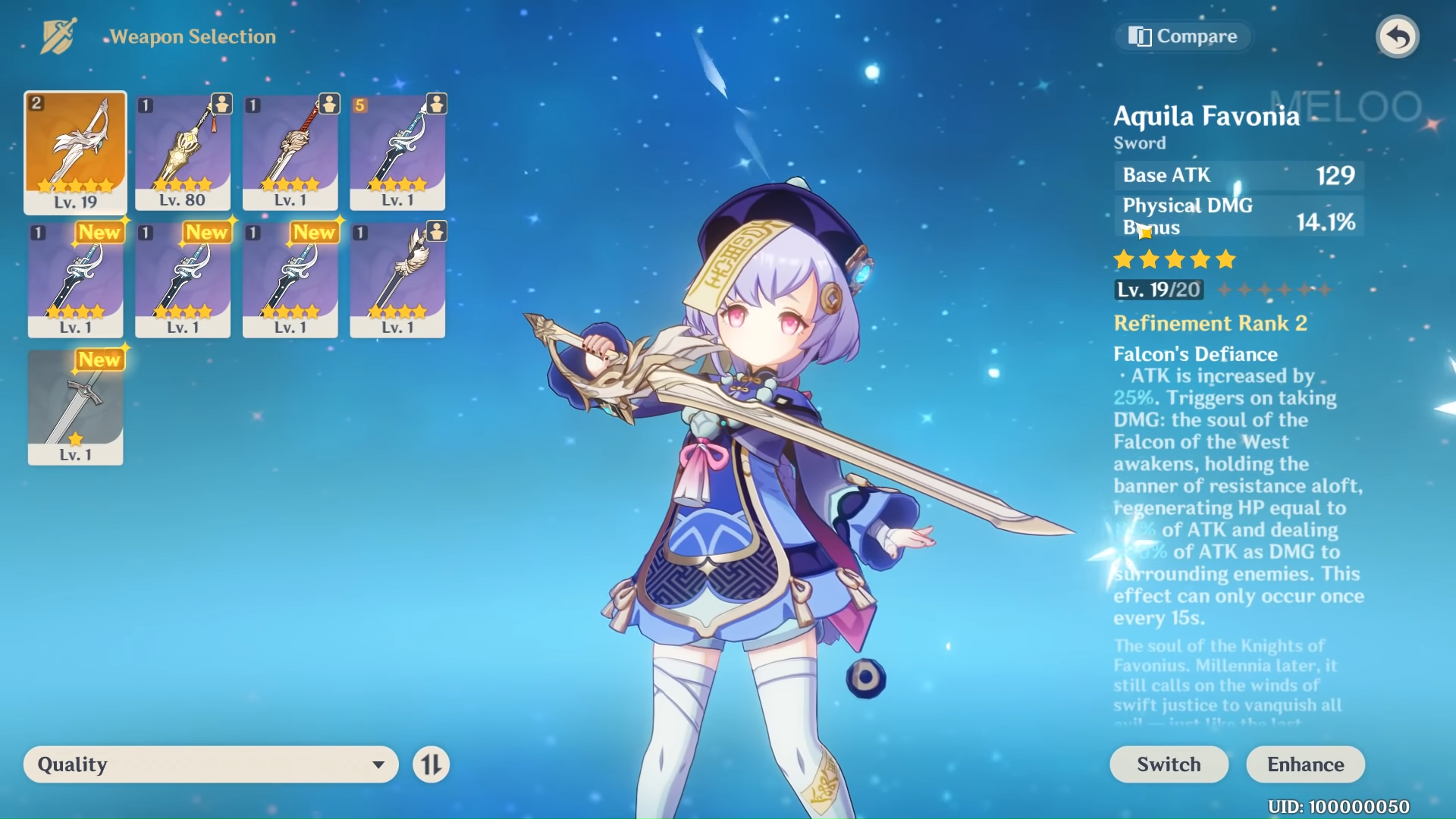 Almost indisputably the best sword in Genshin Impact, the Aquila Favonia can unfortunately only be obtained via Wishes, but it’s well worth taking the chance on. It is a five star sword with a base attack of 48, putting it at the highest of any sword in the game. It comes with the passive skill Falcon’s Defiance, which grants you several amazing buffs. First is a flat increase to your attack by 20-40%. When you take damage, the soul of the Falcon of the West “awakens”, which just means that you will regenerate HP proportional to how much damage you deal from 100-160%, while also doing AOE damage equal to 200-320% of your attack. This can only trigger once every 15 seconds.

Just behind the Aquila Favonia, the Skyward Blade is another five star sword you need to roll for. It has just two points less base attack at 46, but comes with an energy boost and Sky-Piercing Fang. This passive buffs your critical hit chance up by 4-8%. When you use your Elemental Burst you will also trigger an increase in movement speed and a 10% boost to attack, plus you’ll gain 20-40% more damage on your regular and charged attacks for 12 seconds.

This is another beast of a weapon, and if you guessed it was five stars you’d be right. It has a base stat of 48 just like the Aquila, but is more focused on stacking up high damage than the sword. The passive, Eagle Spear of Justice, will increase attack damage by up to 6% for six seconds, but can stack up to seven times. On top of that, every full stack will increase your character’s skill damage by between 12-28%. 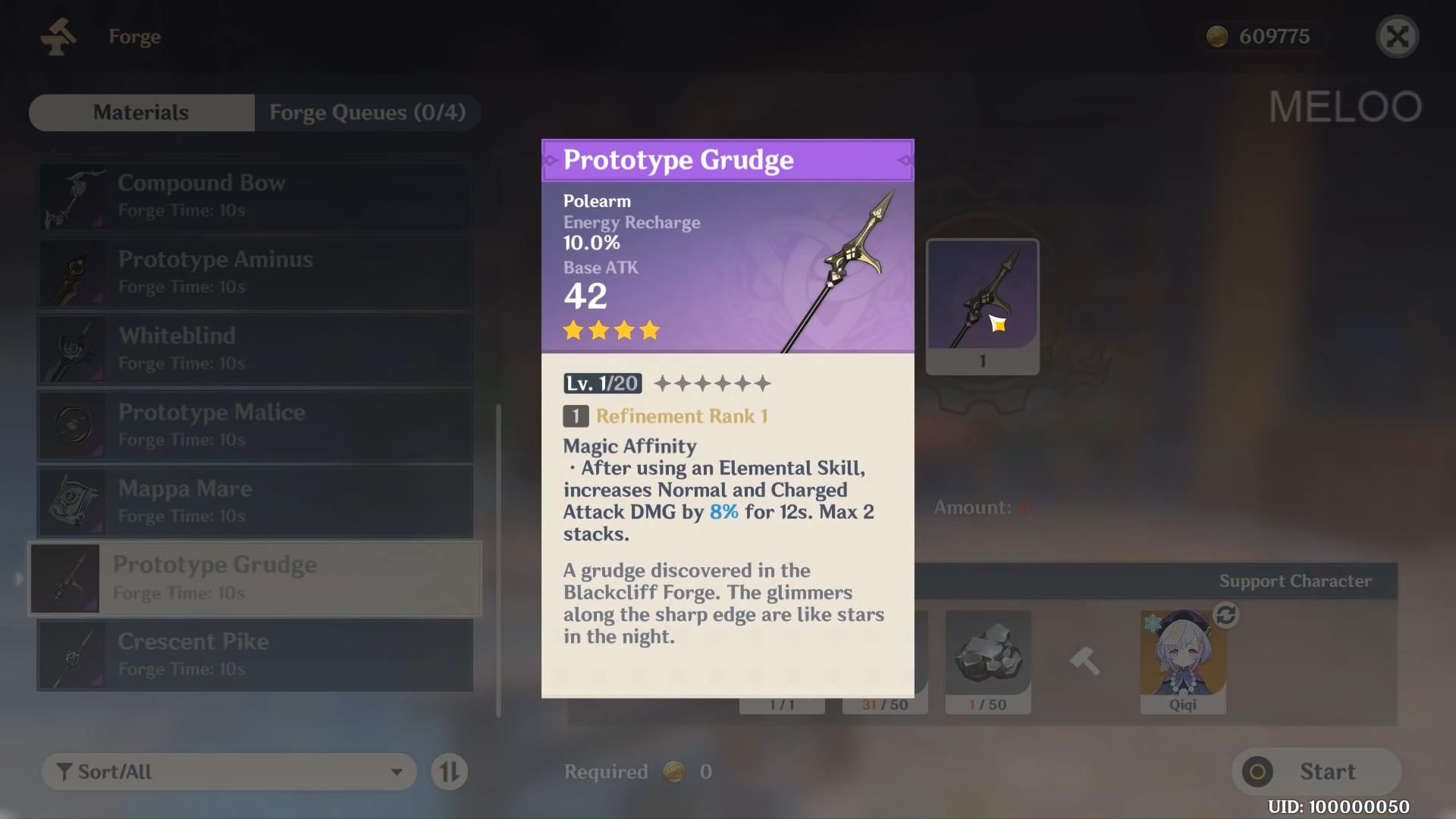 This might only be a four star weapon, but you can actually craft the Prototype Grudge making it much more reliable to get than anything else on the list so far. The base damage is only 42, but has a nice passive that boosts your attack damage by between 12-24% for 12 seconds, and can be stacked twice after using an elemental skill. 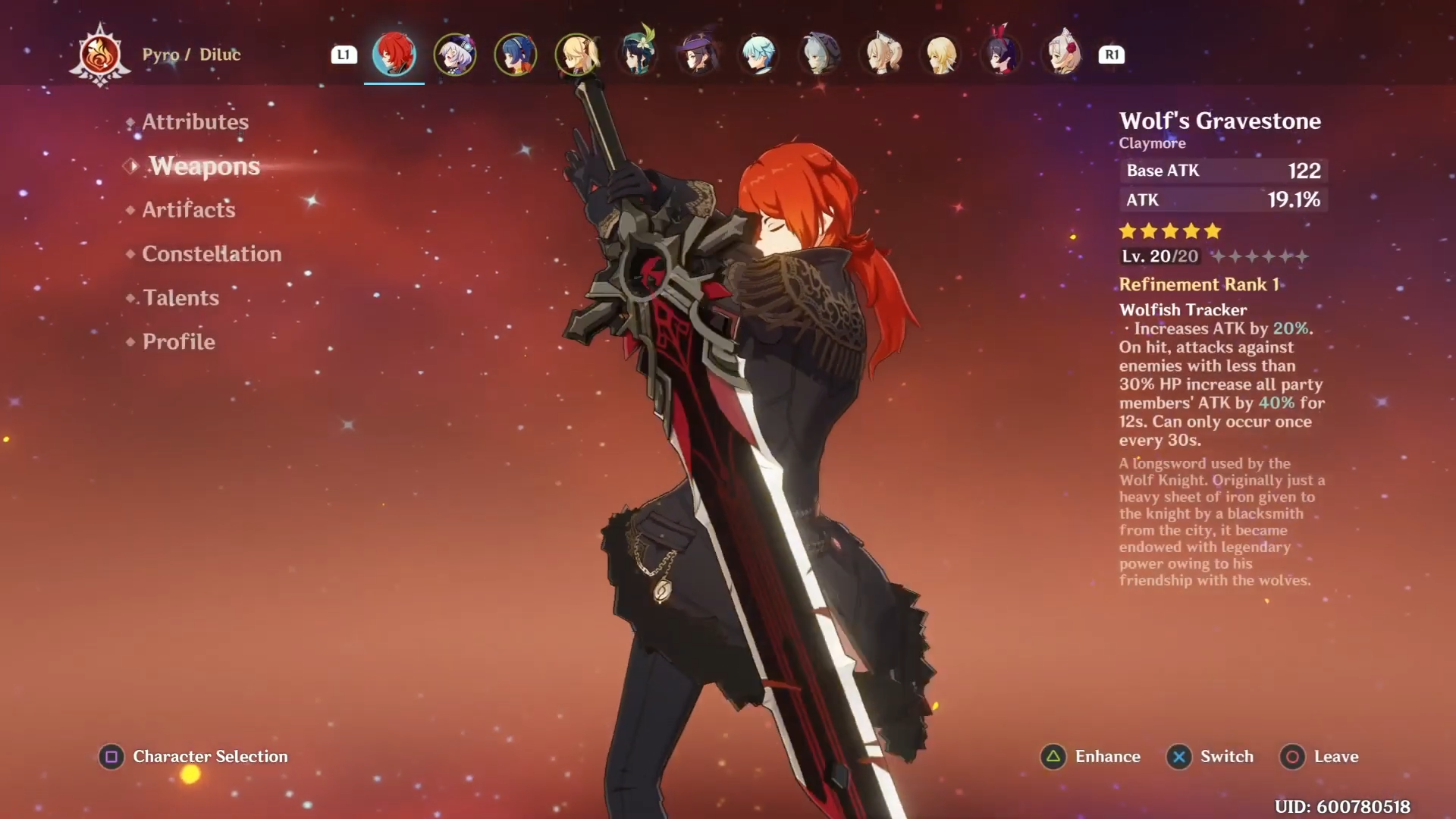 If you’re swinging heavy, you need to be backing the Wolf’s Gravestone. This five star monster comes with a base attack of 46, the highest for this weapon type, and is meant for steamrolling your adversaries. Wolfish Tracker not only boosts your attack by between 20-40% on contact, but if the enemy has less than 30% health remaining your entire party gets an attack buff of between 40-80% for the next 12 seconds. This can only trigger once every 30 seconds, but should be more than enough to finish off just about any non-boss you’re fighting.

Technically the Amos’s Bow has better base damage, but The Viridescent Hunt is still worth taking for some players thanks to its passive skill. You can also earn it through the Battle Pass, which again is a plus. You’re starting off with 42 base attack and a passive skill called Verdant Wind. What this does is, when you land a hit, every following shot gains a 50% chance of spawning a Cyclone that deals damage over time to all enemies in range. This Cyclone does 40% of your attack damage in half second increments for a total of four seconds, meaning it will hit a maximum of eight times. This can only happen every 14 seconds. 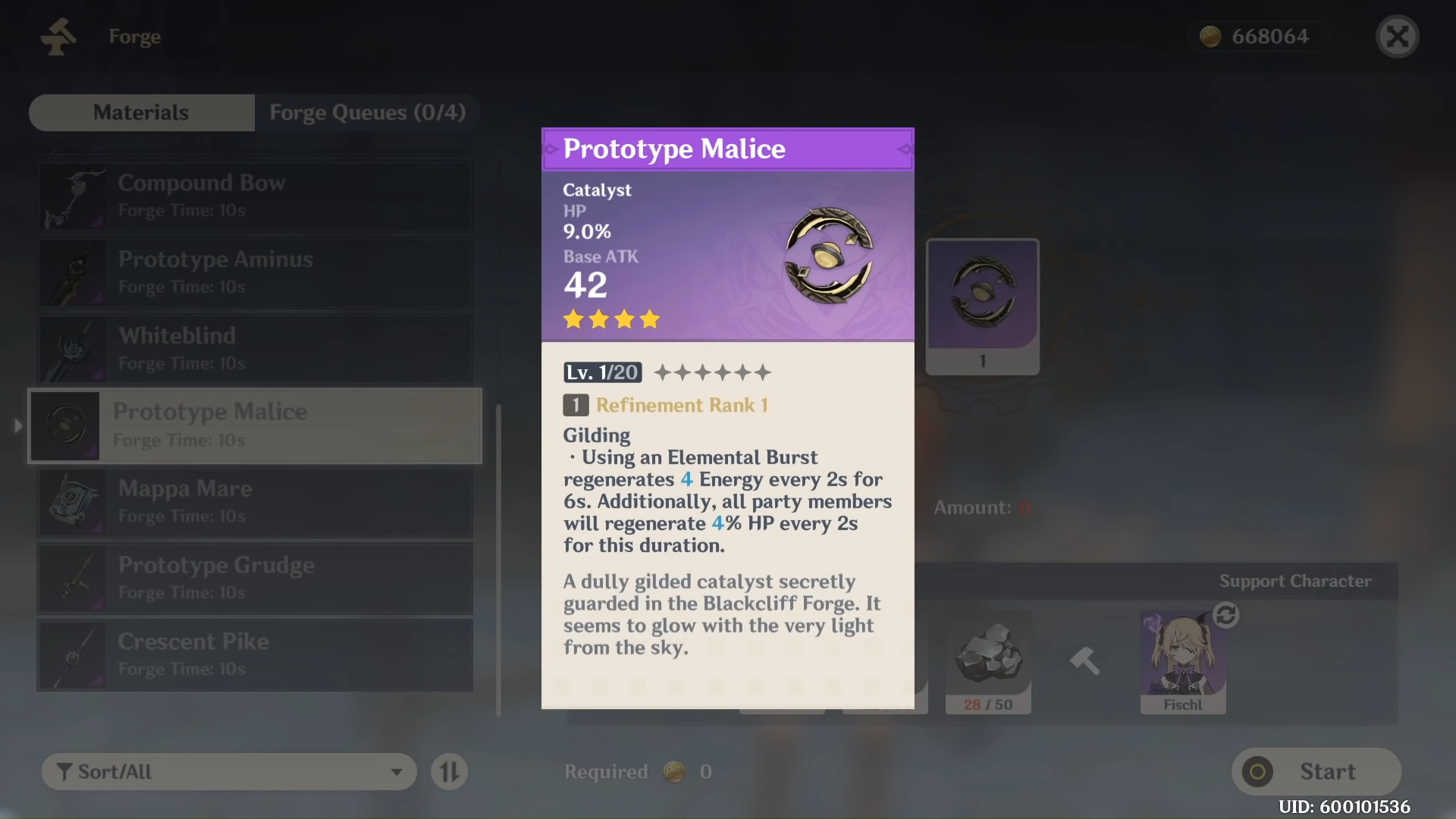 Let’s finish off with another weapon you can craft, the four star Prototype Malice. While it is the weakest weapon on the list with a base attack of just 42, the passive is much more important for your caster. This weapon has Golden Plating, which triggers a passive regeneration of between 4-6 energy every two seconds, for a total of six seconds, after you use an Elemental Burst. On top of that, your other party members will also start to regenerate between 4-6% health for that same time duration. This makes it a great choice for any support magic user in your party.

Next: Genshin Impact: How To Raise Friendship Levels 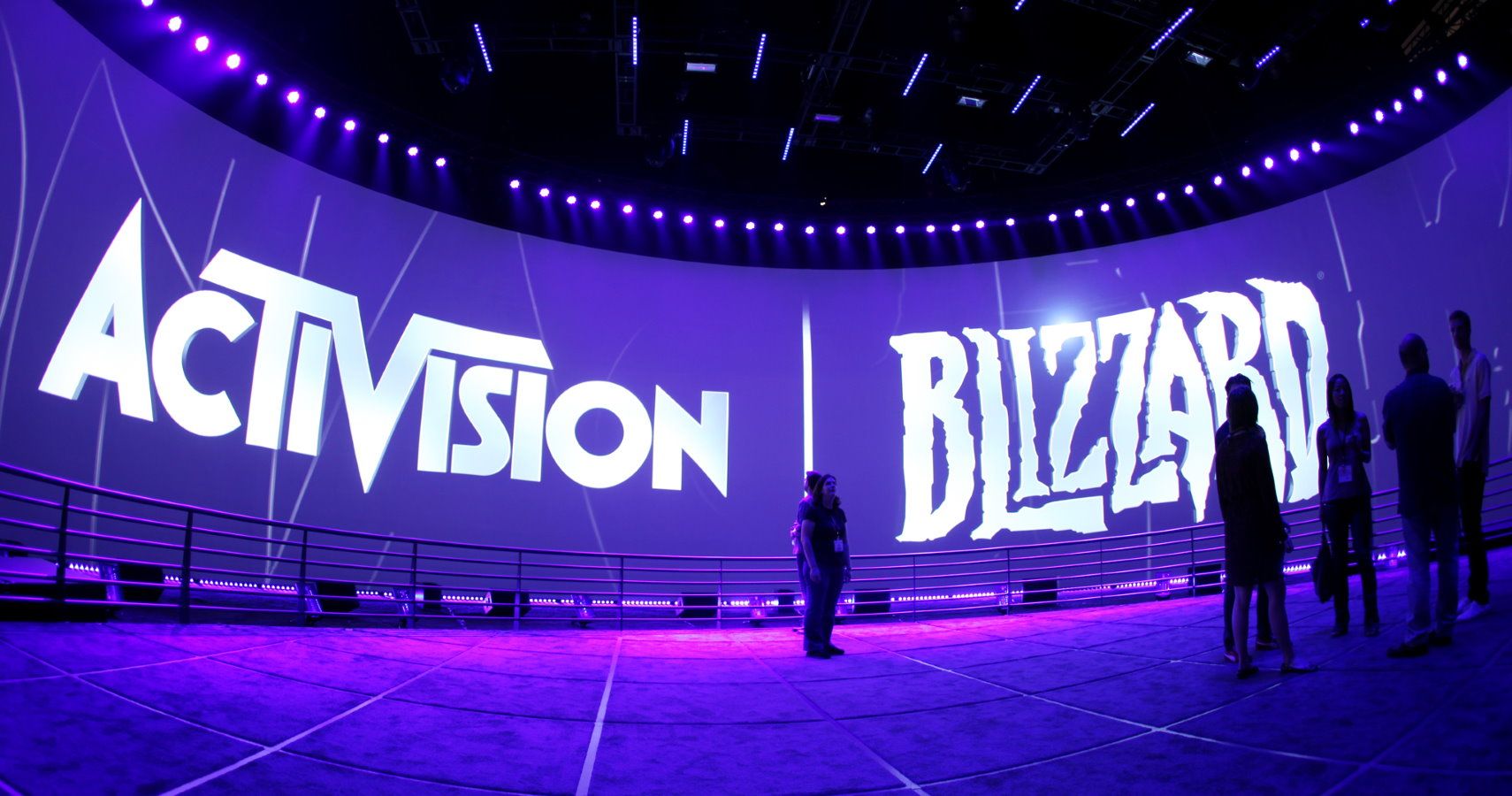