Ghostwire: Tokyo isn’t subtle about its critique of capitalism. For one thing, all the enemies are made up of the resonant energy of the exploited working class. The Slenderman-like Rain Walkers and heavy set Rugged Walkers are born from broken spirits of the overworked and underappreciated. The pain and the suffering of the proletariat manifests as these violent monsters, stripped of their humanity by a lifetime of cultural and systemic mistreatment. If the game’s opinion of the free market wasn’t explicit enough, one of the heroes, KK, tells the other that “all property is theft” within the first hour. Ghostwire: Tokyo acknowledges the hidden effects of life under capitalism that we all experience, knowingly or not, then offers us condolences and a moment of reprieve.

I’m a sucker for any game that dares to express a leftist perspective – especially a big triple-A game from a major publisher like Bethesda – but what makes Ghostwire: Tokyo so powerful is the way its themes inform its gameplay, and vice versa. Rather than waging war against some metaphorical power structures, you spend most of your time searching for ways to relieve the suffering of those around you. It realizes that dismantling systems of oppression is beyond its scope, and instead focuses on coping with them. Ghostwire: Tokyo is not politically revolutionary, but in terms of the way it approaches complicated social themes, it’s one of the most revolutionary games I’ve played.

Video games that address big social problems are never very good at offering solutions. Ubisoft games like Far Cry and Watch Dogs use real-world conflicts and politics as playgrounds for their action movie storylines, but never commit to a clear ideology. Similarly, Ghostwire: Tokyo doesn’t have any solutions for the problems it addresses. It doesn’t provide a meaningful alternative to capitalism, nor does it function as a revenge fantasy against our oppressors. In the face of overwhelming systemic injustice, it chooses to focus on the individual. In doing so, Ghostwire escapes the burden of answering the question it poses. Even if the problem can’t be fixed, we can still learn how to deal with it better – before our pain turns us into monsters.

When Ghostwire starts, society is already doomed. A supernatural fog sweeps through Shibuya and ensnares every living person in the city. What remains are nothing more than echoes of civilization: malignant Visitors, lost souls, and the spirits of those who are unable to move on. Unsurprisingly, these spirits with unfinished business are often trapped by problems that exist as a consequence of privatization and individualism. The ghost of a tenant has been robbed by her landlord, who as it turns out, did so out of financial necessity. A hoarder is so obsessed with materialism that his house has become a spiritual black hole. An office is haunted by suicide victims who can’t move on until they convince another person to kill themselves – talk about training your replacement. Even the lost souls who supposedly have a chance of being saved by KK’s mysterious friend Ed are preoccupied by their former economic burdens, like rent prices and loan payments. 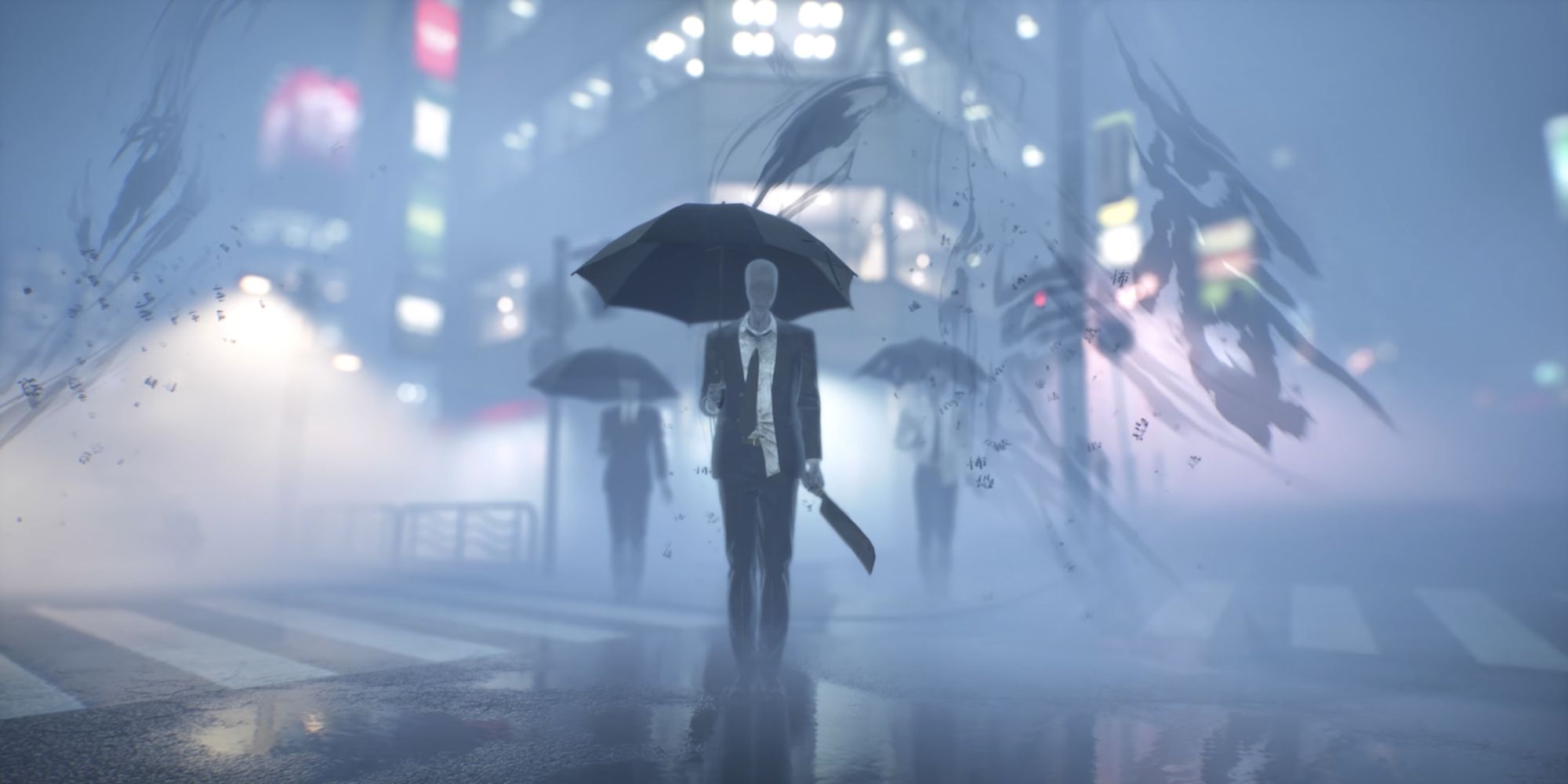 So we help them. Whatever past trauma is keeping these spirits tied to our world, we find a way to help them cope so they can finally move on. We can’t do anything about the systemic causes, but we can deal with the effects. Ghostwire: Tokyo doesn’t cynically harp on the negative consequences of corporatism and commodification the way KK’s “all property is theft” might lead you to believe. It focuses on showing compassion for the subjugated rather than disdain for the subjugators. In turn, Ghostwire extends that same compassion to us.

This is what I find so remarkable about Ghostwire: Tokyo. At the end of the day, when we’re finished producing surplus value for the stakeholders of the companies we work for, we’re afforded a few hours for ourselves. If you’re reading this, you probably spend a lot of your personal time playing video games. There’s a lot to be said for disconnecting and decompressing through escapism, but Ghostwire: Tokyo, for all its fantasy and surrealism, is decidedly not escapist. We can’t numb ourselves from the trauma of existing under unchecked capitalism while playing a game explicitly about that trauma, of course. Because so much of the gameplay is rooted in empathy, however, the experience is profoundly therapeutic. When you take the time to help these lost spirits – using your preciously limited free time to practice kindness – you’re actually helping yourself. Ghostwire: Tokyo is both a message about coping with systems beyond our control and the mechanism by which we can do the coping.

It must be said that Ghostwire: Tokyo, like all games, follows capitalism’s labor model. Fighting enemies to gain experience and earning money to buy food are both core mechanics of Ghostwire. Despite its criticisms of capitalism, it isn’t able to escape being an extension of it.

As Theodor W Adorno and Max Horkheimer wrote in their 1947 book, Dialectic of Enlightenment:

“Amusement under late capitalism is the prolongation of work. It is sought after as an escape from the mechanized work process, and to recruit strength in order to be able to cope with it again. But at the same time mechanization has such power over a man's leisure and happiness, and so profoundly determines the manufacture of amusement goods, that his experiences are inevitably after-images of the work process itself. What happens at work, in the factory, or in the office can only be escaped from by approximation to it in one's leisure time.”

Even as Tokyo is overrun by a dense fog of annihilation that wipes out civilization, Akito and KK are still subjected to the burdens of capitalism as they divert from their ultimate goal to earn money. In turn, the gameplay systems force us to engage with the processes of simulated labor that inevitably makes them “after-images of the work process itself.” There is no escape, but Ghostwire: Tokyo never promises one – only better ways to cope.