The beautiful land of Cantha served as the backdrop for Guild Wars 2: End of Dragons. While playing through this expansion, you may have been paying attention, but did you catch every detail in the story? Here, we are going to go over some small and hidden details that you might have missed while playing.

Since we are talking about the story of End of Dragons, this will contain spoilers. If you have not yet made it to Cantha, we suggest coming back later. Now, let's take a look at the first detail that you might have missed; the story of the brown cow. 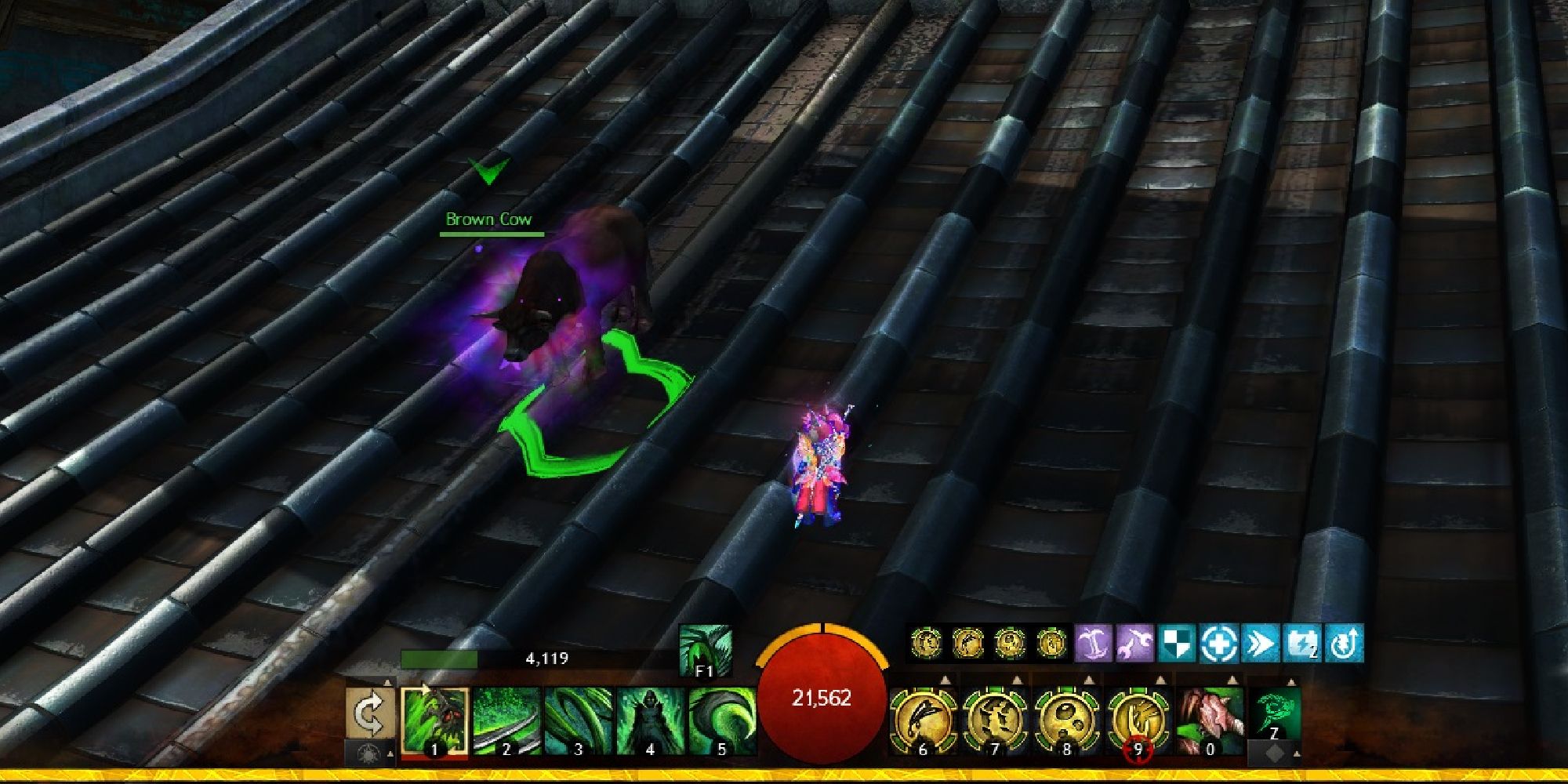 Alongside the story of Soo-won and the Elder Dragons, we have the smaller story of a traveling cow. This brown cow first made her appearance on the Bazaar Docks during the Festival of the Four Winds, at the suggestion of Connor Fallon, who is the Senior Game Designer at ArenaNet.

This cow was a hit, and later made an appearance in Jahai Bluffs. Now, with the End of Dragons story out, we can find this brown cow in Dragon’s End, on a rooftop near the Xiko Refugee Camp. Nobody really knows this cows true purpose; some believe that it is time traveling, while others believe that it is a god watching over them. Who knows, maybe the cow will return in the future. 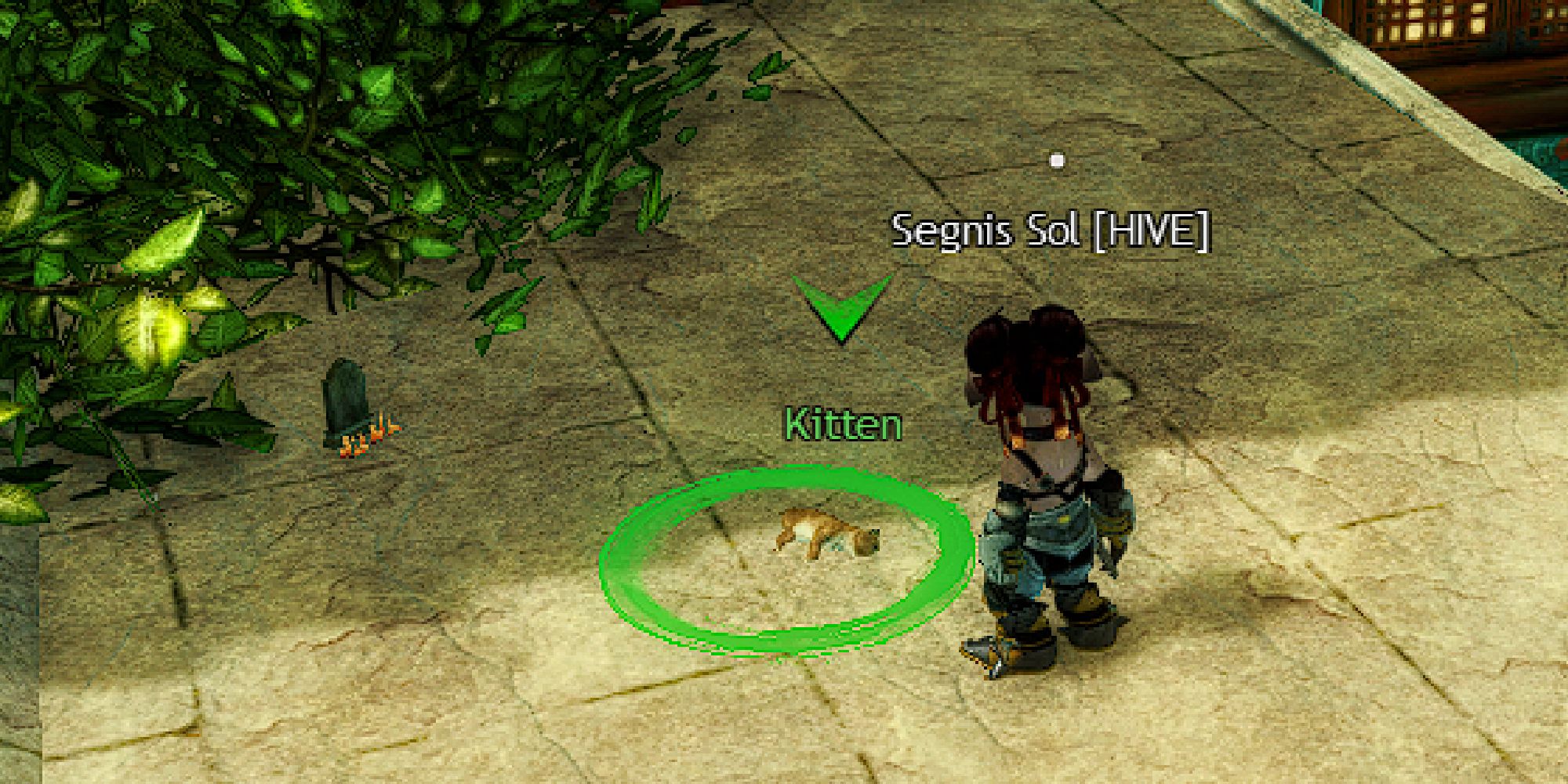 Next up, we have another entry thanks to Conner Fallon. In February of 2022, there was a Guild Chat that featured a tour of New Kaineng City. While on this tour, host Indigo Boock was showing off a cute kitten; at this moment, Connor accidentally killed the kitten though.

Now, in New Kaineng City, you can find a memorial dedicated to this kitten, as well as another kitten standing in front of it. To put a dark twist on this memorial, when you pet this living kitten, it will die. While this isn’t essential to the story, you can still head here while in the city and pay your respects.

4 The Meaning Of Yu Joon 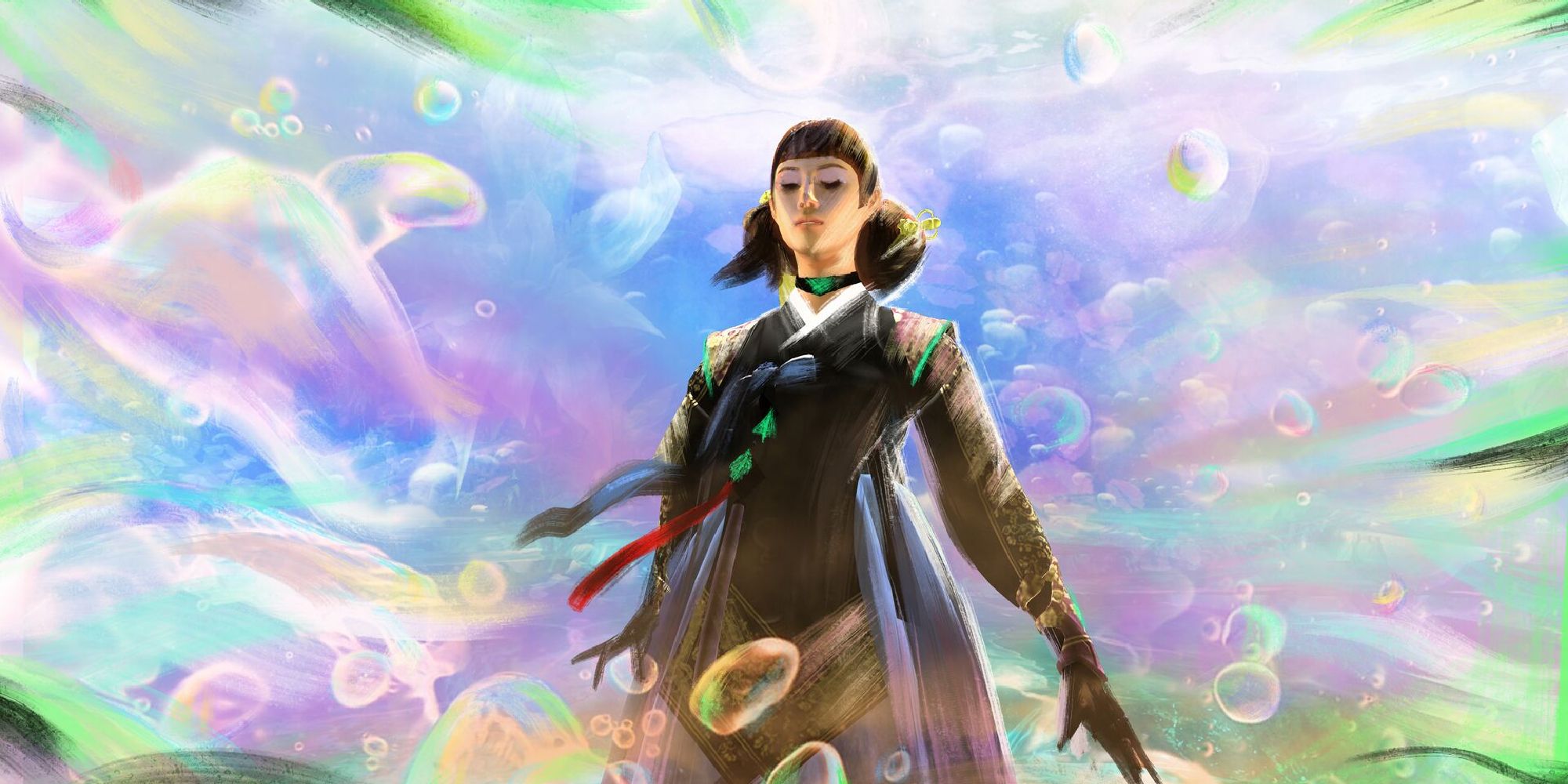 Names have meaning, and Lady Yu Joon is no exception. Joon is the illegitimate daughter of the Emperor, and the half-sister of Empress Ihn. Her mom, Yu Dal-Rae was a jade trader in Cantha. Interestingly, the surname ‘Yu’ means ‘jade’ in Chinese. The first name of ‘Joon’ can be translated in Korean, Chinese, and Japanese. Going forward with the Chinese surname, ‘Joon’ translates to ‘talented’ or ‘handsome’, but is typically used in a masculine sense.

In Korean, ‘Joon’ can also mean ‘ruler’. This is interesting to think about, considering Yu Joon created Xunlai Jade, the powerhouse company for fade-related technology. Yu Joon, or ‘Jade Ruler’, is a fitting name for someone who owns Xunlai Jade. 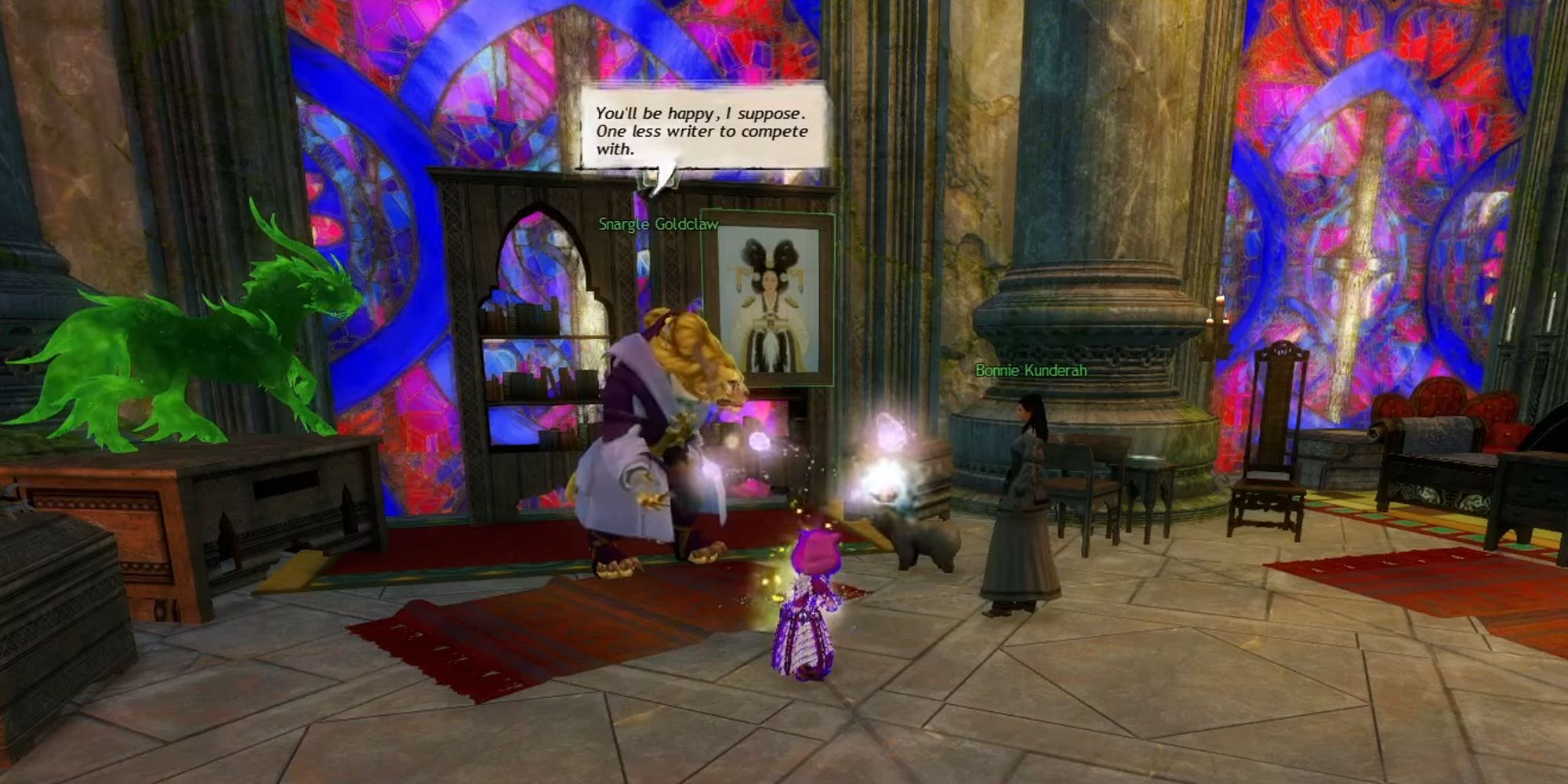 Snargle Goldclaw is a Charr author who appears several times throughout Guild Wars 2. This character was created by Conner Fallon and Lily Yu, and tends to write interspecies fanfiction, especially involving the Commander (that’s you!). Snargle Goldclaw is loosely based on a comic series posted on Tumblr that focuses on Snargle Gutslurper. These comics are short and silly stories, detailing the Pact Commander’s life.

Snargle makes an appearance in Seitung Province near the Shing Jea Monastery. Here, you can talk with him to complete the Character Growth achievement. Once this achievement has been completed, he will move to the library area of Arborstone. Snargle will go off talking to you, sharing his plights, as well as ideas for his new books. Through these conversations, we learn that Snargle and Bonnie Kunderah are opening ‘Goldclaw and Kunderah Publishing House’ soon. Maybe we will get more Snargle works in the future! 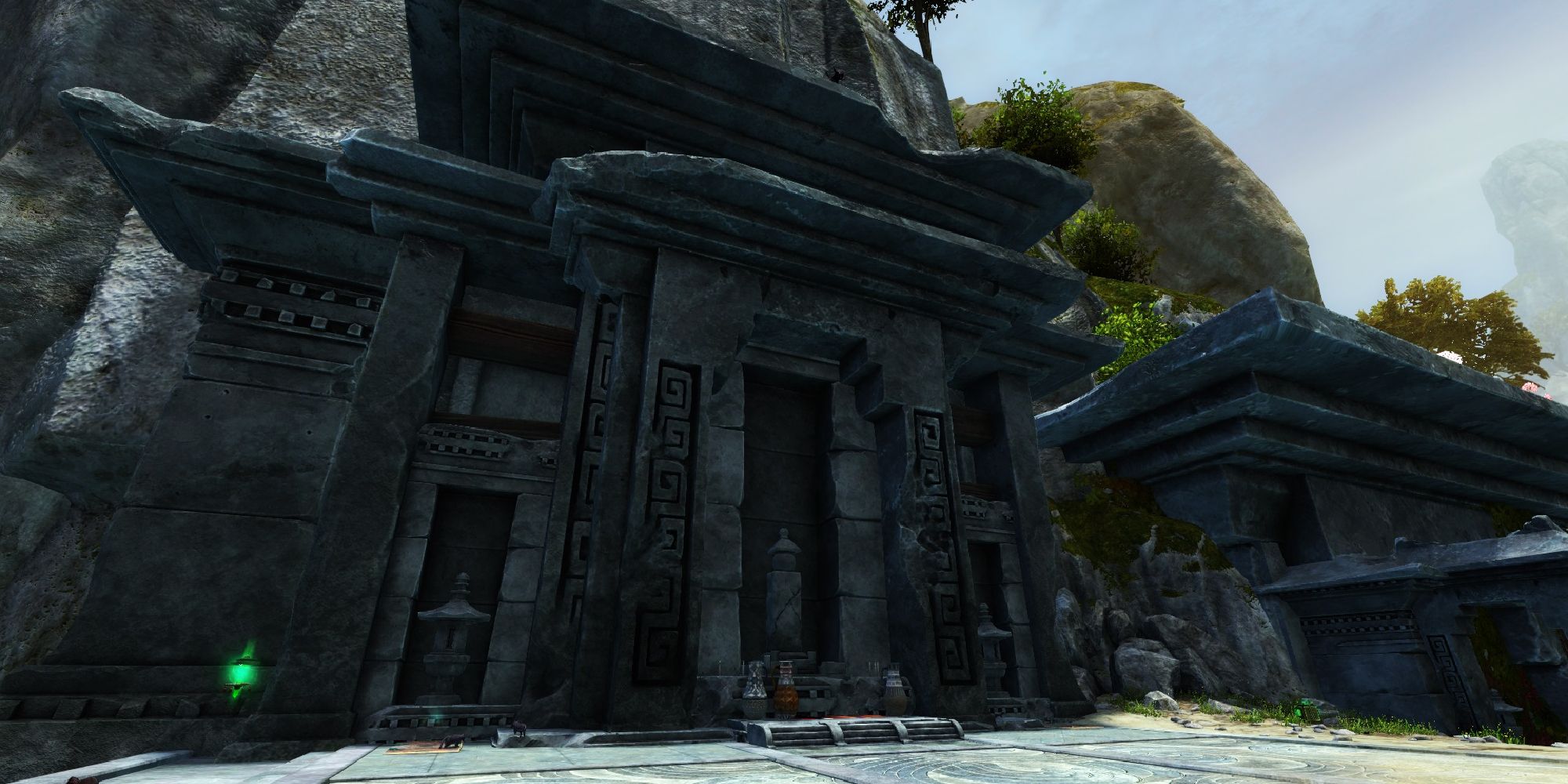 Dragon’s End has several shrines that you can visit and complete events at. At the Shrine to Hanuku, you can complete a group event to defeat a summoned creature. Once this has been complete, a ghostly Shrine Cat will appear, telling you about the Shrine.

Prior to speaking with the cat, we are under the impression that the Shrine is dedicated to Zhu Hanuku, a spirit living in the Jade Sea. At this location, it was said that Zhu Hanuku manifested as a Kraken, and was slain here once a year by the Luxons. By speaking with the Shrine Cat, you learn this is not actually a shrine to Zhu Hanuku. Instead, it’s just a place where the Luxons prayed to ‘spirits of nature’. Zhu Hanuku’s spirit does not rest here, but it’s true location is unknown.

1 Ela Makkay And The Tentacled Horrors 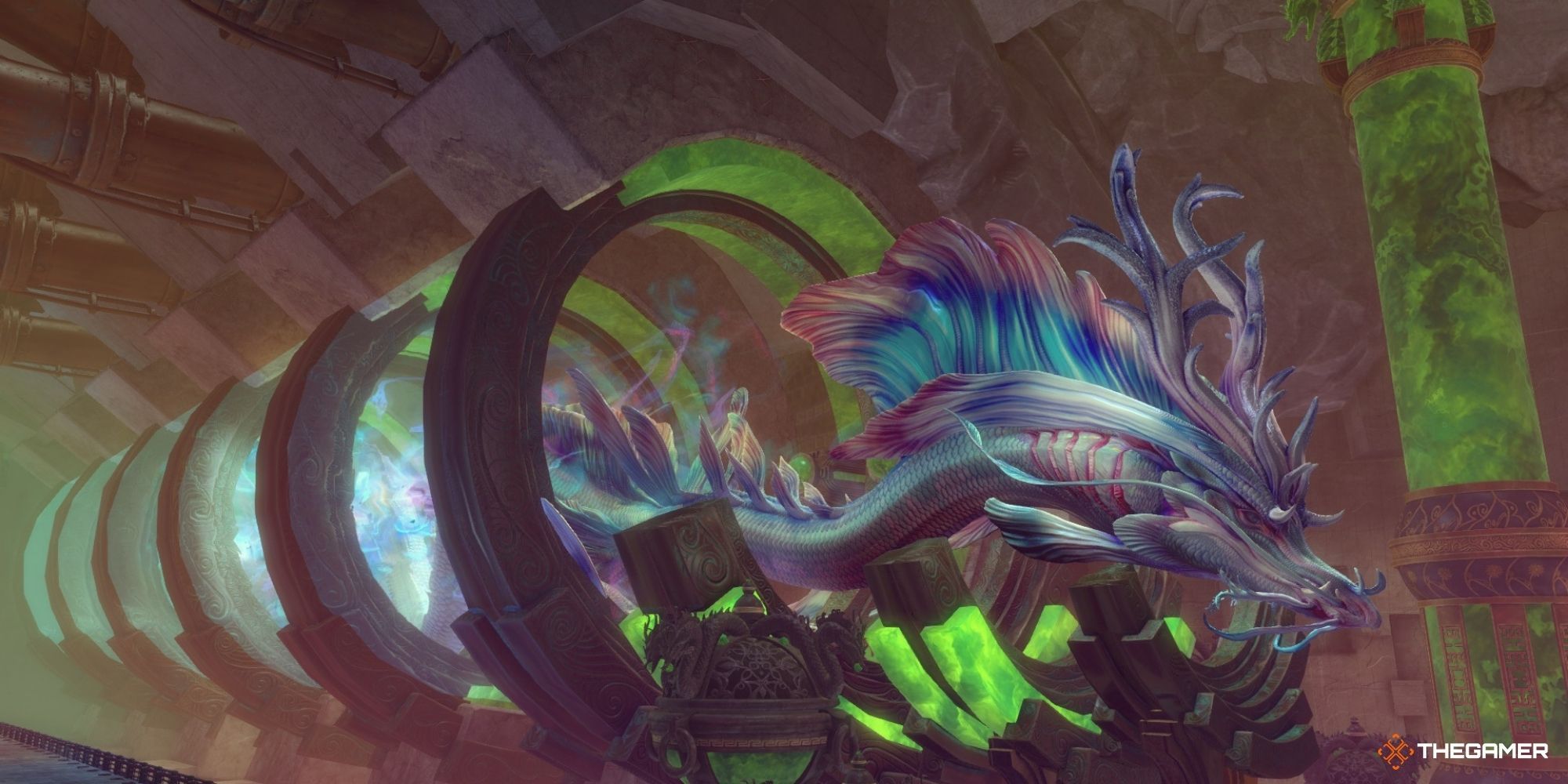 Ela Makkay is a member of the Durmand Priory, who appears several times throughout the entire Guild Wars 2 story. In New Kaineng City, you can find Ela near the Power Plant. Here, she will tell you her theory that the ‘tentacled horrors’ are the minions of Soo-won. This makes sense, considering other Elder Dragons have minions. For example, the Icebrood are the minions of Jormag.

During this conversation, Ela Makkay mentioned that the tentacled horrors’ appearance does not line up with when Soo-Won awakened. Instead, it lined up when the dragon left. When Soo-Won was living in the depths of the ocean, her powers might have kept the tentacled horrors at bay. Once Soo-Won left the depths of the ocean, the horrors began to appear.

This would lead us to believe that there is something else in the ocean. The true source of the horrors is unknown, and this may become relevant in the future.