Hades is a repetitive game by design. That might sound odd considering how popular it is now (it’s even up for some awards), but grinding is a key aspect to this tale told in the Underworld. Zagreus keeps trying to escape until he reaches the top, that’s the core of the game. And, along the way, he unlocks new bonds, skills, weapons, and even new furniture to decorate his room with. But all of that costs varying amounts of the different types of currency in Hades.

So, in order to help players out, here are some lesser-known methods that’ll help Zag get the resources he needs just a bit quicker (other than fishing, of course).

10 Grind On Heat Levels That Are Already Completed 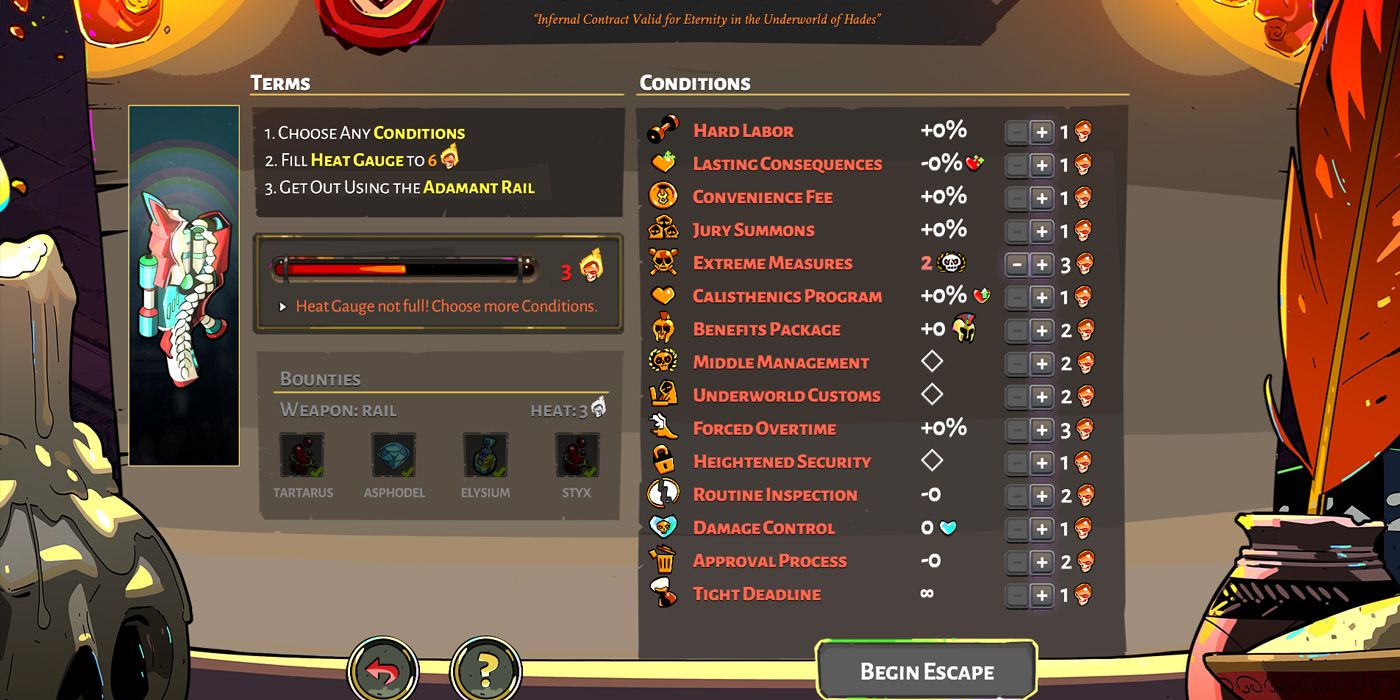 The Bounty & Pact of Punishment System is really only for people who have completely beaten the game at least once. And how it works, is that Zagreus can increase certain modifiers in the game to make it more difficult, and in exchange, he gets some fantastic rewards the first time he beats each boss on said Heat Level. But, what happens when Zag tries to escape on a Heat Level he’s already completely cleared? Well, each boss drops a big chunk of Darkness instead, helping players expand their much-needed collection, and this chunk gets bigger for each boss. So, for those trying to max out all their Mirror of Night upgrades, this will be a big help.

9 Be Versatile Enough For “Darker Thirst” 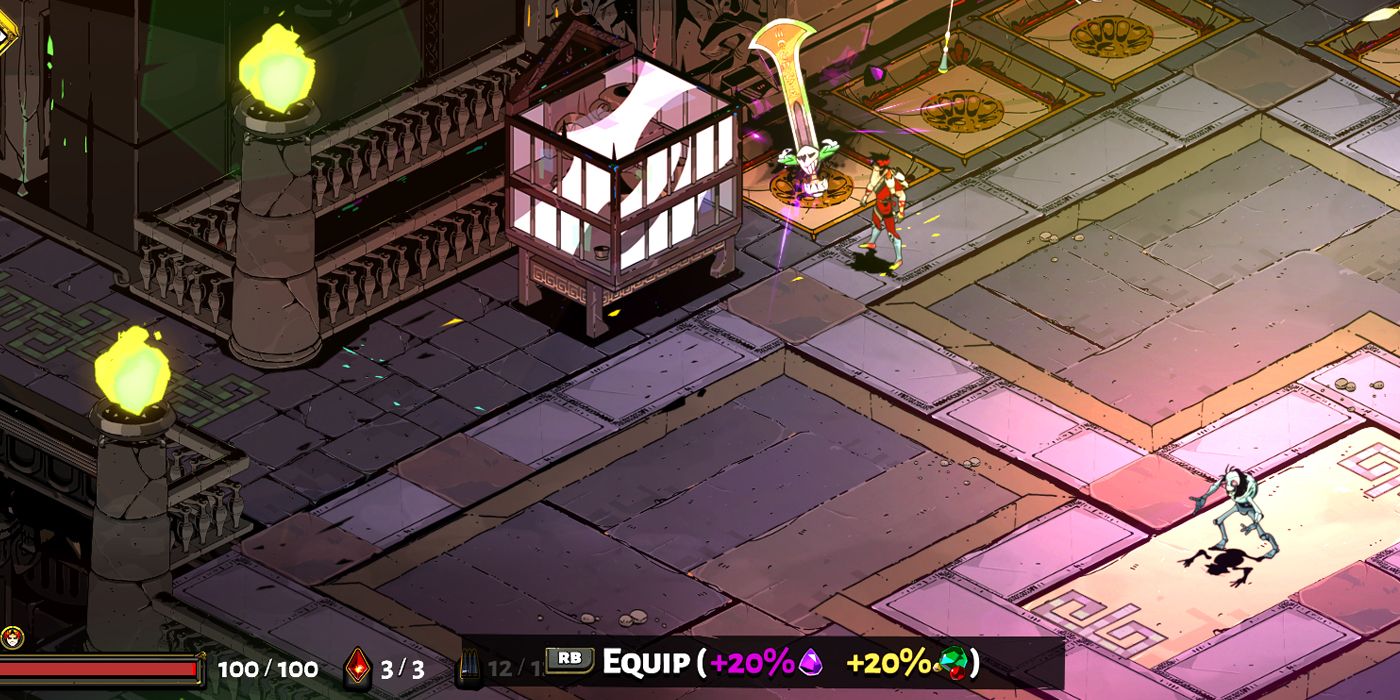 Players might notice that there are times where one of the Infernal Arms on Zag’s balcony has this odd purple effect around it. If they’ve never investigated, this is actually a random buff called “Darker Thirst” that gives Zag 20% extra Darkness while using that weapon for the next run. And, if players are already playing a Lower Heat Level than they’ve beaten, and they’re on the lookout for Darkness rooms, Well of Charon Items, and Chaos Buffs, they’ll get a significantly higher amount of Darkness in this run than they likely expected. And, for those who have particular aspects they like, Darker Thirst applies to any aspect of that particular weapon. 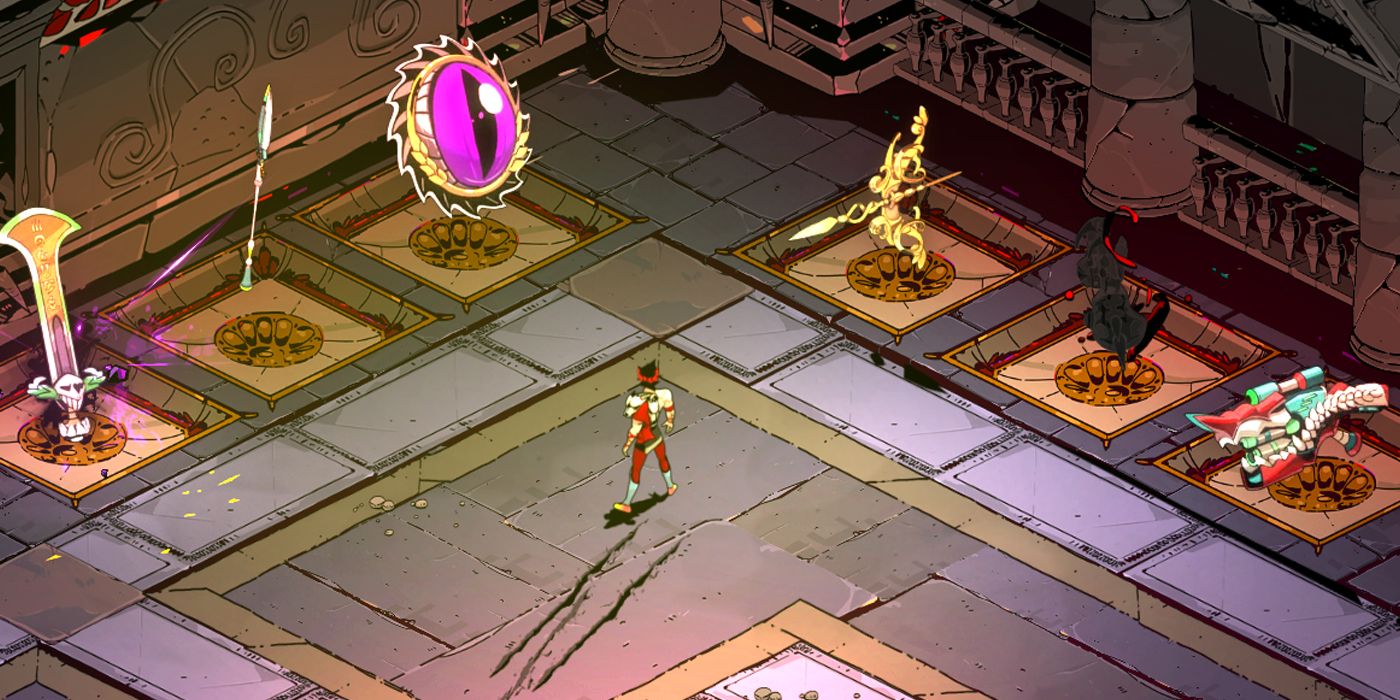 Moving off of Darkness for a second, there are plenty of other artifacts that Zag needs to grind for unlocks such as Titan Blood, Ambrosia, and even Diamonds. Luckily, the Bounty System is a fantastic way to get a bunch of these things, as one of each (except for Titan Blood which gives 2) is rewarded for each boss in a Heat Run that players haven’t beaten before. But, something players might not know, is that the Heat Level minimum for a Bounty reward is tied to each individual Infernal Arms, rather than all of them at once. This means that if players can’t quite beat Heat 15 with Fists, they can swap to the Bow for a while and climb up to Heat 15 again, cashing in the Bounties the entire way through.

7 Grab Some From Sisyphus 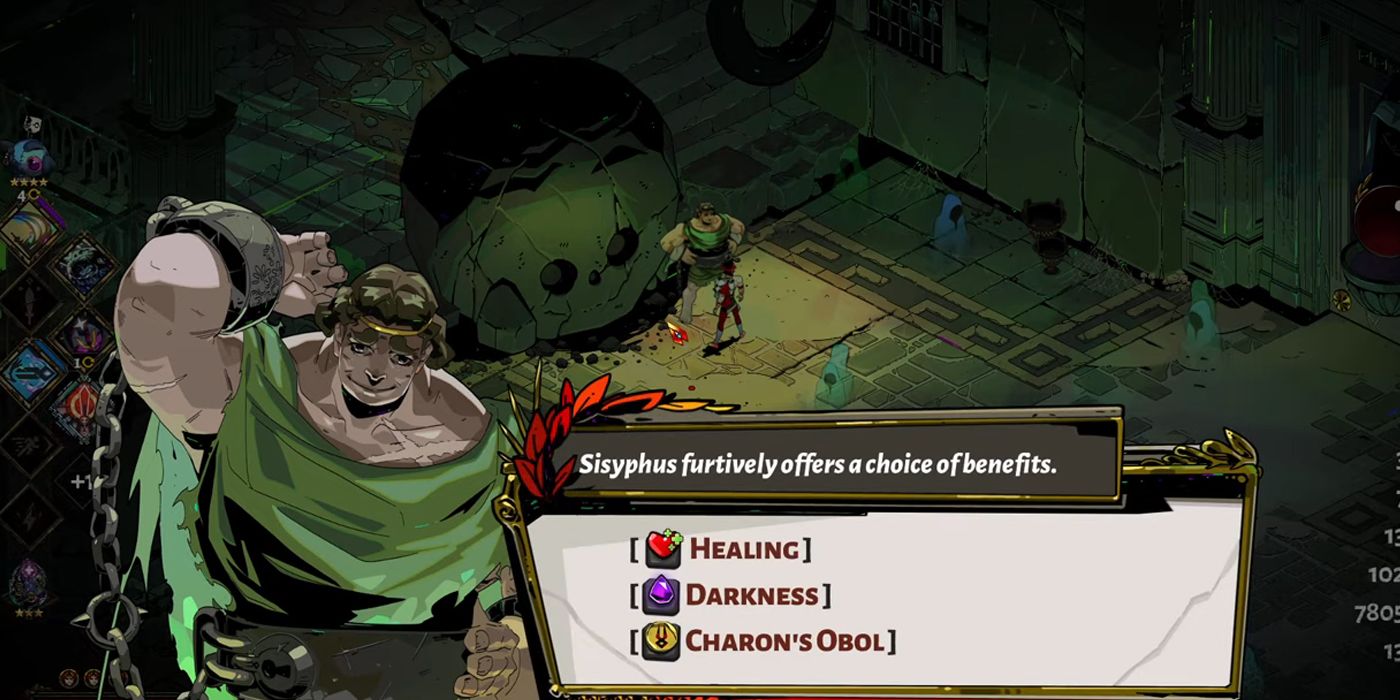 This is another obvious one, but it takes some serious strength of will to pick rewards that benefit Zagreus later rather than now. Sisyphus is the NPC chamber encounter in Tartarus, and he’s a real sweetheart. In exchange for just simply making conversation with him and Bouldy, Sisyphus gives Zagreus a reward of his choice, some money, some health, or some Darkness.

While the money and health seem nice, their benefits disappear after the run, but the Darkness? That stays. If players are trying to grind out resources, pick Darkness as a reward every time, it might be hard to ignore those Centaur Heart and Boon rooms, but it’ll be worth it in the long run.

6 Look For Skull Icons, Erebus Rooms, And Clear Out The Temple Of Styx 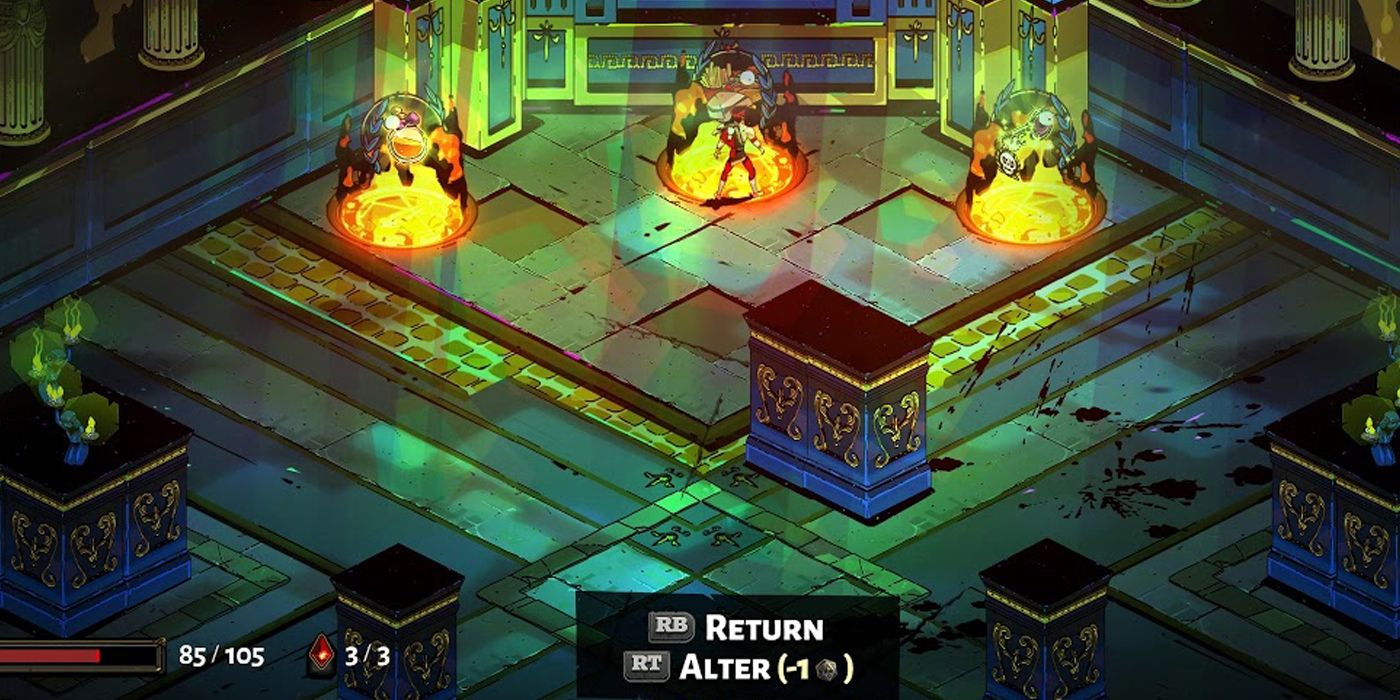 Players also probably don’t know that there are rare instances where the room rewards are greater than they appear. For example, all the rewards in the Temple of Styx are amplified versions of common rewards (Boons with a higher chance of rarity, bigger piles of Obol, Poms that upgrade by 2 instead of 1). Erebus is like this as well, and so are the boss rooms technically. But, what a surprising amount of players don’t know, is that the Chambers with the little skull icon in the preview window also give these amplified rewards! 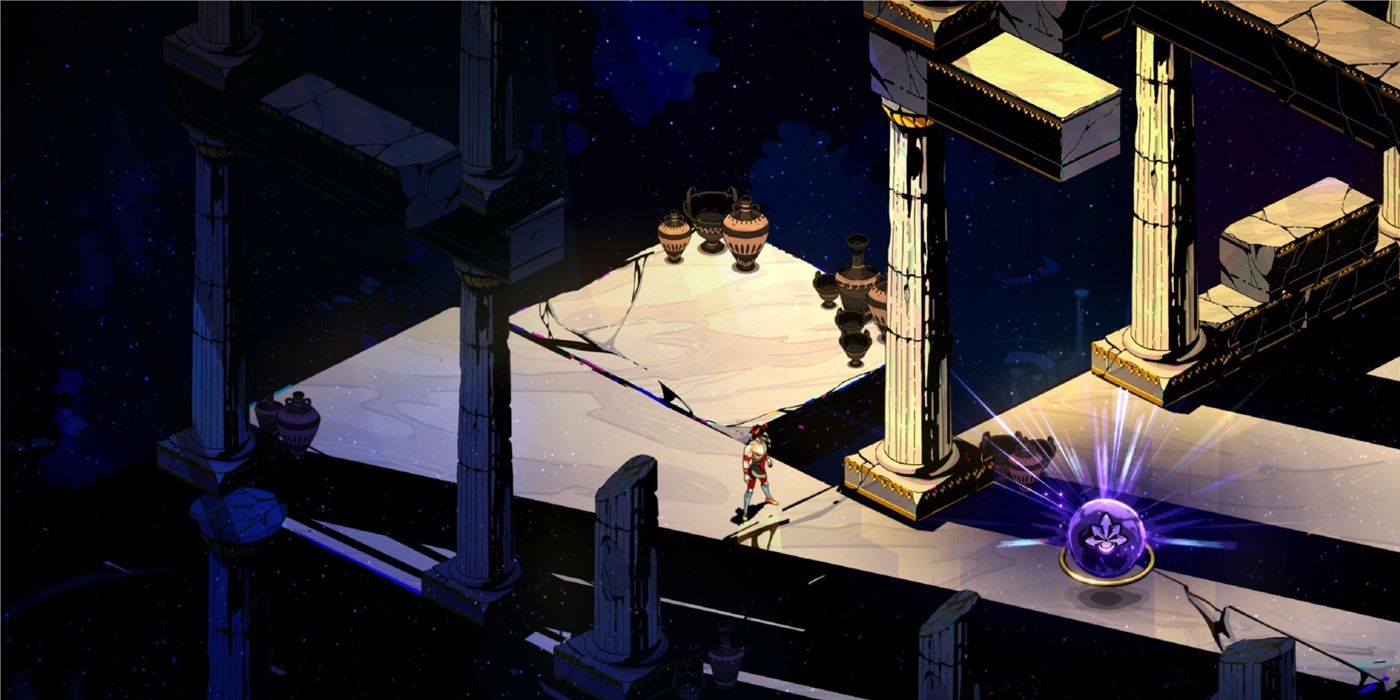 Chaos Boons are so insanely good. Of course, they’re a lot better with the Fated Persuasion skill from the Mirror, but even if players can’t reroll one of the three options Chaos offers is usually worth it. And, there’s always a Chaos Door early on, sometimes even in the first chamber. So, for players grinding Darkness especially, go in there with the Persuasion Skill equipped, reroll until there’s Boon that offers a percentage buff to reward rooms, and get grinding. And, if there isn’t one, maybe restart the run and go for it again.

4 Use Fated Authority For Specific Rewards 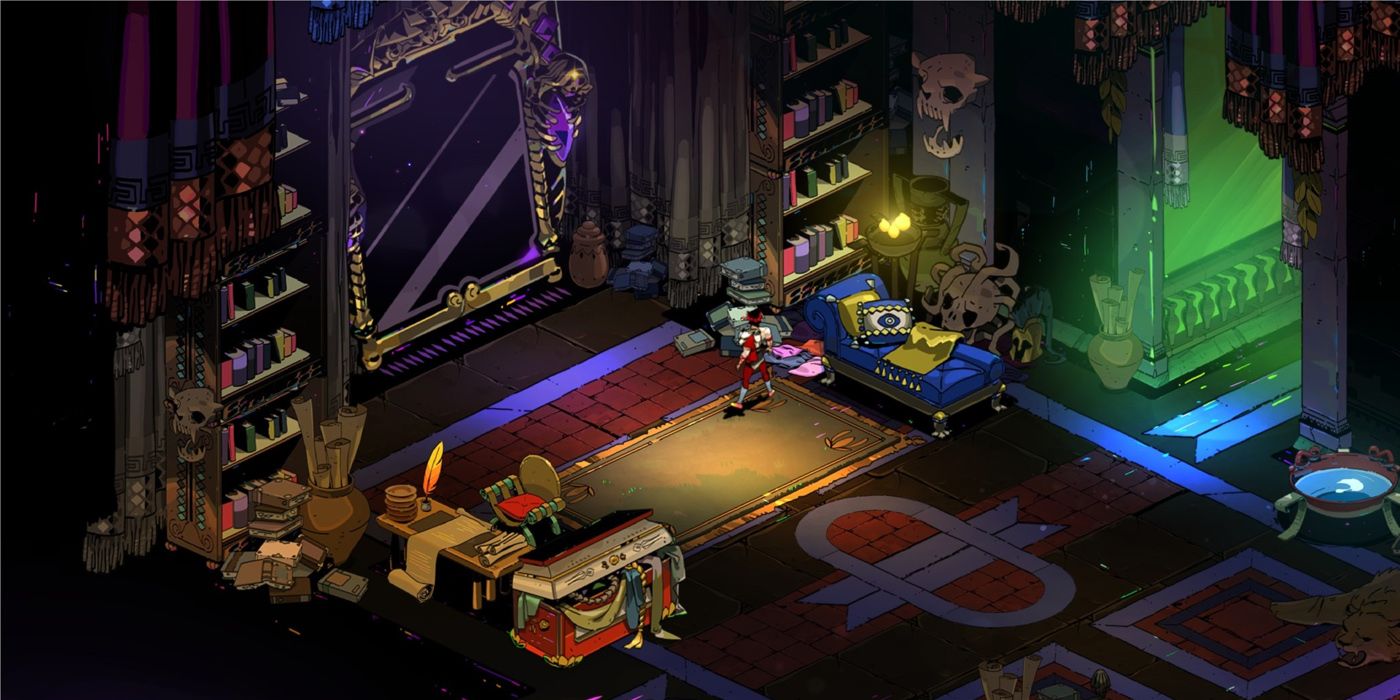 Speaking of rerolls, the other version of the Fated Persuasion Skill is called Fated Authority, and it’s incredibly good in a different way. Basically, instead of letting players reroll Boon options, it lets them reroll the Room Reward itself before Zag enters. This means that if a player wants more gemstones (which they always will), they can simply reroll a room until that’s what they get. But, be aware, there are two different “Pools” of potential rooms, with Gemstones, Darkness, and Nectar in one pool and Boons, Hammers, Hearts, and Poms in another. 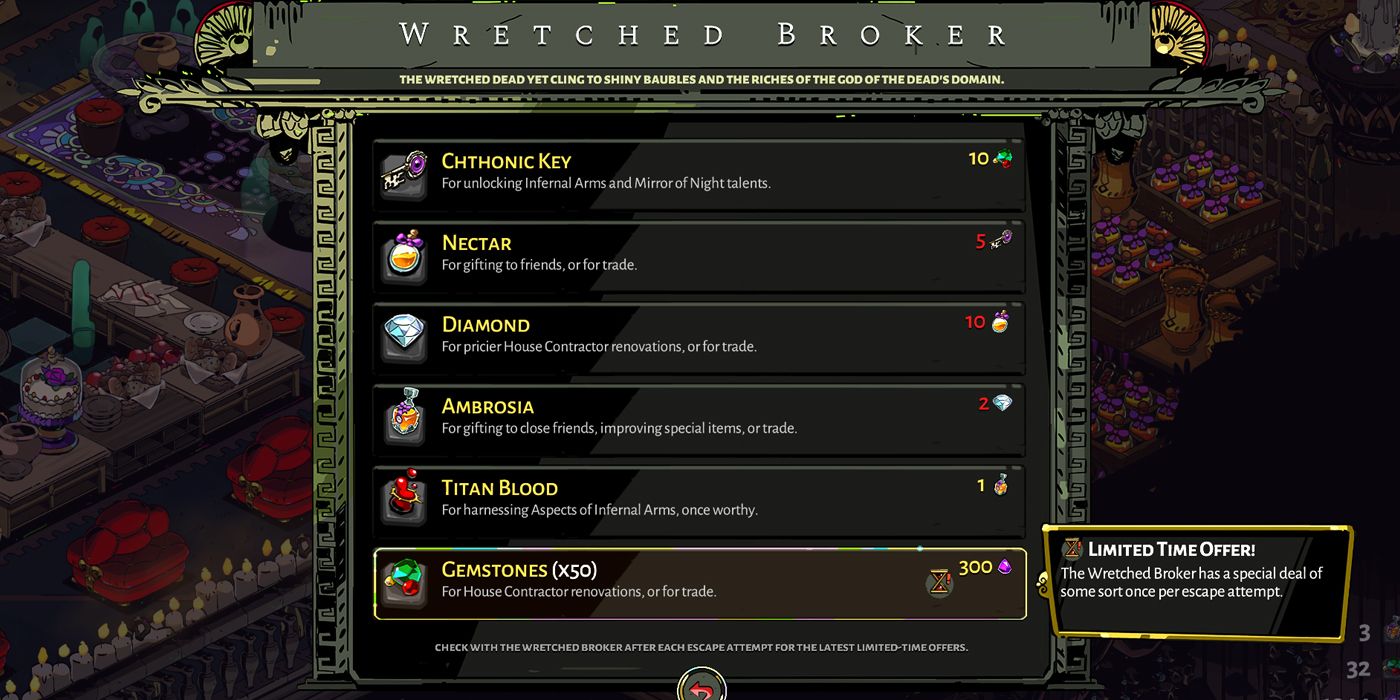 Sure, Charon’s Shop is pretty great to run into, but what about those insanely good deals the Wretched Broker offers? This NPC is always sequestered in the Lounge and offers Zag the opportunity to turn an abundance of one resource into another. Have 50 Keys? Thats 10 Nectar right there. Don’t want your gemstones? Make a pile of keys!

But, one thing that can’t be understated, is the limited time deals it offers. Zag can only redeem this deal once, then it resets to something new after his next run.

2 Clear Out The Bigger Prophecies On The Fated List 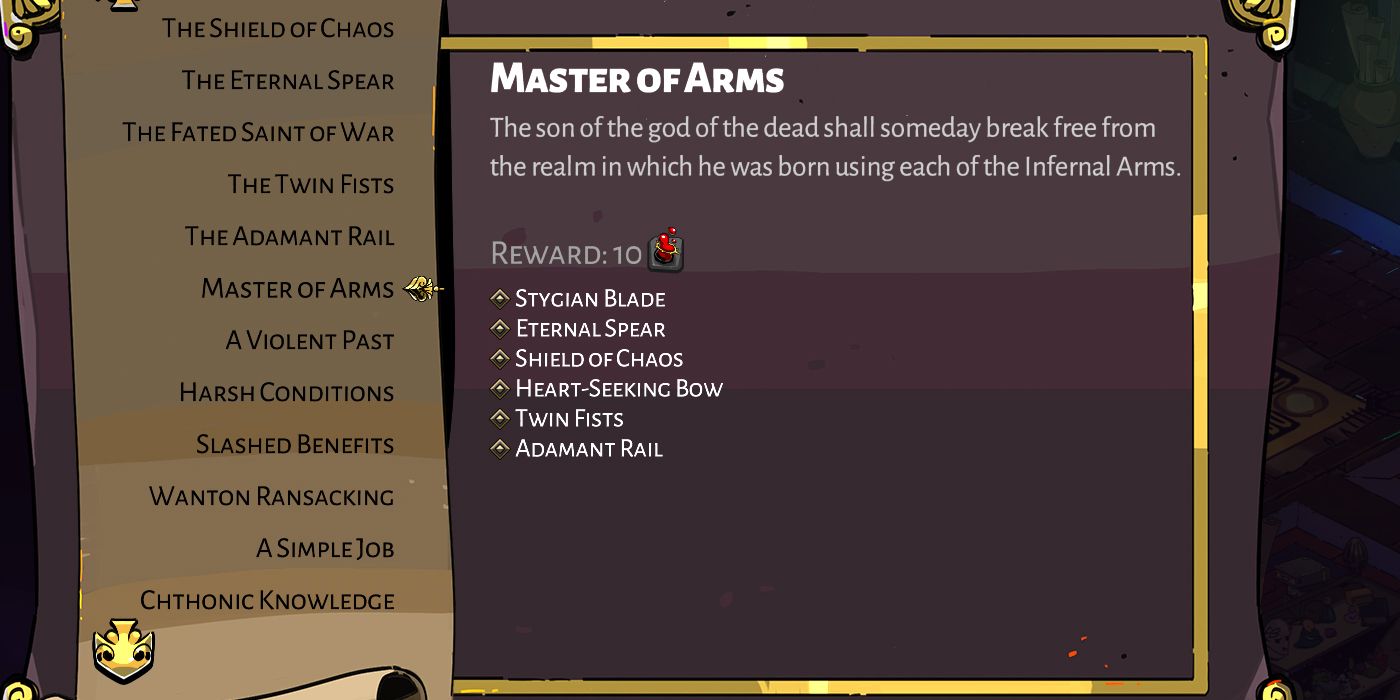 The Fated List is a side mechanic of Hades that should not be ignored. It basically functions as an in-game achievement/challenge system, giving Zagreus rewards based on “prophecies” the Fates are sure he’ll achieve. Frankly, fans love it and wish more prophecies would be added or the system would be expanded.  Still, tons of them just offer a chunk of Gemstones, but there are a few that give some pretty big rewards. Basically, just scroll through all of the prophecies and see which ones seem the easiest to achieve for the biggest reward.

1 Don’t Spend Any Gold Until Styx 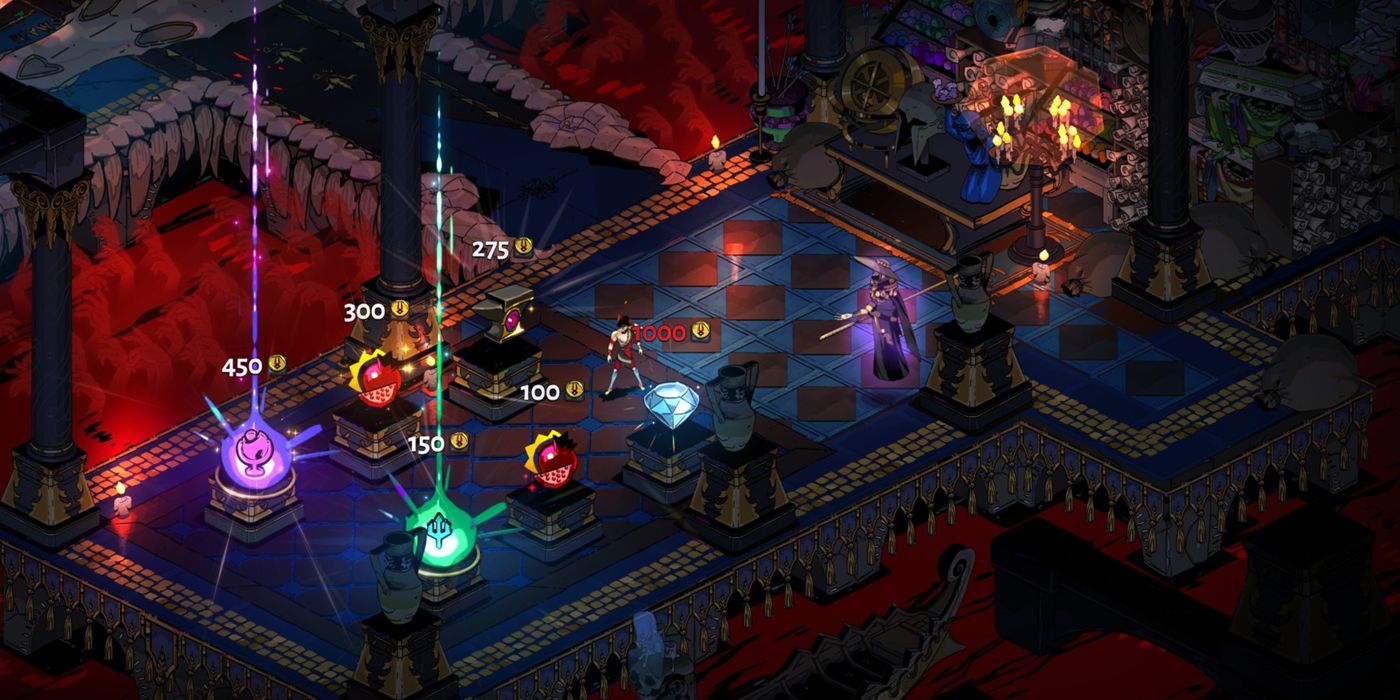 Lastly, for those who have really mastered Hades and don’t need to rely on the “crutch” that is the Well of Charon, the Shop, or anything else that uses Obol, there’s always the Shop in Styx. In the Temple of Styx, Zag is forced to go through a series of chambers in search of a “Satyr Sack” to feed to Cerberus and get them to move so he can escape. And, right next to where this giant pup stands guard, is one final Charon Shop that’s extra expensive. And, the most expensive item in this shop is always a rare resource such as a Diamond or a Titan Blood. The Diamond costs 1000 obol and the Titan Blood goes for 1200, which is a pretty easy amount to achieve for a player who has been penny-pinching.

NEXT: 10 Games You Should Play If You Like Hades 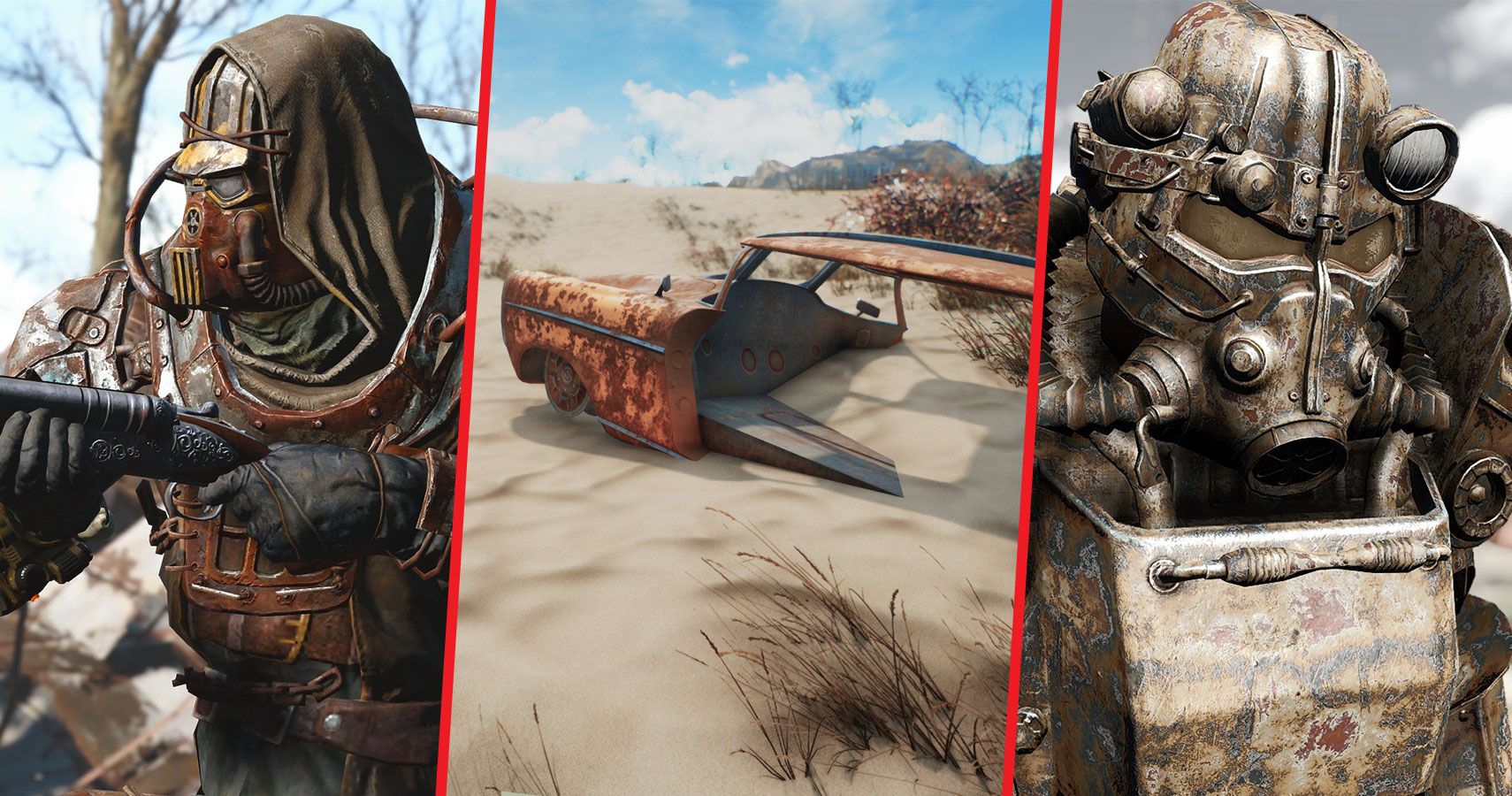