PES 2020 comes out on September 10 (PS4, Xbox One, and PC), but its demo already gives us a glimpse of what we may see in the game’s final iteration. Although Konami has promised that some changes are on the way, such as to fouls (see below for more), the demo could advertise that a solid year of gameplay is in store. Here’s what the demo does well and what I hope it means come release time. 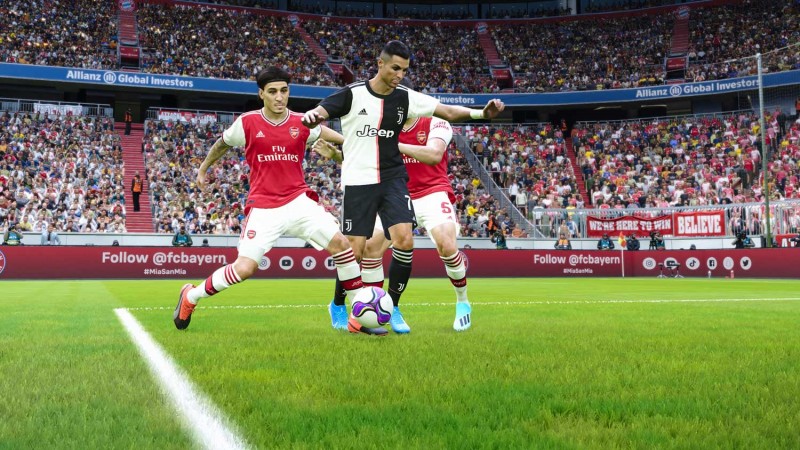 The demo showcases more player contact expressed through jostling animations, providing players a way to slow down and pester attackers until numbers arrive or to prevent clean passes and shots. You can even tactically foul players in some situations.

Related to this are the number of fouls the refs call. I like that more calls are being made than in previous years, since they are called on you when you’re trying to make standing tackles from behind or slightly to the side of the dribbler. This is as it should be since these are risky areas. I’ve also noticed in the demo that even defensively engaging opponents from the front can cause fouls if you are rash and don’t time it right. Konami says that it believes the refs in the demo call fouls too excessively, so I hope they balance the final game correctly.

One thing related to fouls I would like to see is more of them called on the opponents, since it seems like the A.I. still gets away with bloody murder at times.

I’ve never been very good at headers in the game, but I like their timing in the demo. I think the window to execute them isn’t as early or is possibly more forgiving than last year. This includes being on defense, where clearances are of the upmost importance.

Your A.I. teammates are very helpful in throwing their bodies, feet, and even faces at shots which is great. The one speculative concern I have with this for the final game is that I hope my teammates are smart enough and defensively organized enough to clear the resulting rebounds. I say this because there are times in the demo, like in PES 2019, that defenders are unaware of what’s going on or switch off. Having said that, and ending on a positive note, I’ve seen plenty of times in the demo where your teammates get in good defensive positions and harass dribblers without being directly commanded to.

Dependable online play has consistently been a problem for the series, whether it’s lag or simply getting matched with an opponent with a good connection. While the demo environment doesn’t match the final release, one thing I really liked in the demo was the ability to see your opponent’s connection before deciding to accept or decline. This won’t stop lag cheaters who purposely overload their connection to produce automatic drops when they are losing, but at least it gives you a heads up before your jump in.

The default speed for the game feels slower than last year, which I don’t have a problem with. This highlights one-on-one matchups, which themselves are helped by a new finesse dribbling technique performed by letting go of the left analog stick and just using the right analog. This is advertised as a new feature, but it’s basically a refresh of the old R2 close control. Either way it’s a useful and easy-to-perform way to buy yourself some time by dragging the ball back or shifting from one foot to the other to keep opponents at bay without having to go into a multi-input, full-blown special move.

THE A.I. IN ATTACK

PES 2019 was notorious for the way the A.I. patterned its attack. This had to be addressed in a post-release patch, and it’s nice to see the demo carriers forward that progress. Long balls into the channels, lay-offs and cuts inside at the top of the box, and drags along the end line, are all different ways the A.I. attacks.

The larger question for PES 2020 proper is the matter of overall A.I. scripting – something that fans complained about in 2019. How overpowered will teams feel when behind and/or nerfed when ahead? It’s a big issue that the game has to sort out, whether it’s overt or a more subtle balancing issue that gives players that sensation.

Matthew Kato explores the wide world of video game sports in his column, The Sports Desk. Check back every Monday for the latest analysis and news in the genre from this sports fanatic.