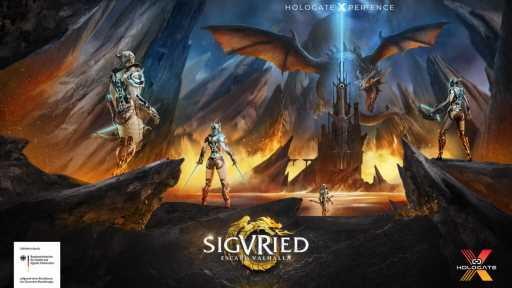 Earlier this year, location-based entertainment (LBE) specialist Hologate announced it would be launching a flagship location in Germany called Hologate World. This week, the company has revealed its next-generation platform Hologate X will make its debut at the facility as well as introducing a new hyper-reality experience, Sigvried: Escape from Valhalla.

While Hologate’s product portfolio has mainly focused on providing a scalable, free-roaming platform for entertainment venues, Hologate X aims to completely enhance the VR experience for players. It’ll feature HXR (Hologate Xperience Reality), the company’s proprietary hyper-reality technology which offers full-body tracking and 4D physical effects – like wind or temperature changes. While this has been seen in places like (now-defunct) The VOID, Hologate X does one thing differently, all the content is streamed to the headsets.

Most hyper-reality venues utilise backpack PC’s to provide their free-roaming experiences. These are costly, cumbersome and require a lot more time to set up and maintain. Because Hologate X will steam all of its content, this should reduce the friction when it comes to playing LBE VR, plus guests are no longer weighed down by a whole PC on their backs.

“Our formula of the latest in VR technology with high-fidelity VR streaming, perfectly staged 4D effects such as scents and wind, THX 5.1 surround within the platform and positional inside of the headset audio mix, and fantastical lifelike adventures will catapult players directly into the action,” said Leif Petersen, CEO, and Founder of HOLOGATE in a statement. “All senses are further activated by tactile props and full-body haptics which will further convince the players they have been truly transported into another dimension.”

As part of Hologate X’s debut at Hologate World in September, the team has fully developed, in-house, Sigvried: Escape from Valhalla to showcase the new platform. Combining Norse mythology with a sci-fi twist, the narrative is set after Ragnarök has taken place, with players taking on the roles of adventurers who are exploring the destroyed fortress of Valhalla. Wandering through its many halls, corridors, and chambers players need to complete puzzles, avoid traps, and battle monsters and dragons to succeed.

If you want to check Sigvried: Escape from Valhalla out then you’ll want to head to FLAIR Fürth, a big shopping complex that is slated to open on 16th September 2021. Hologate X will be coming to other locations worldwide at a later date, when that happens VRFocus will let you know.