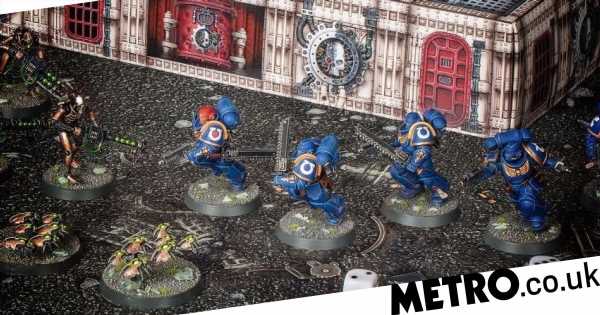 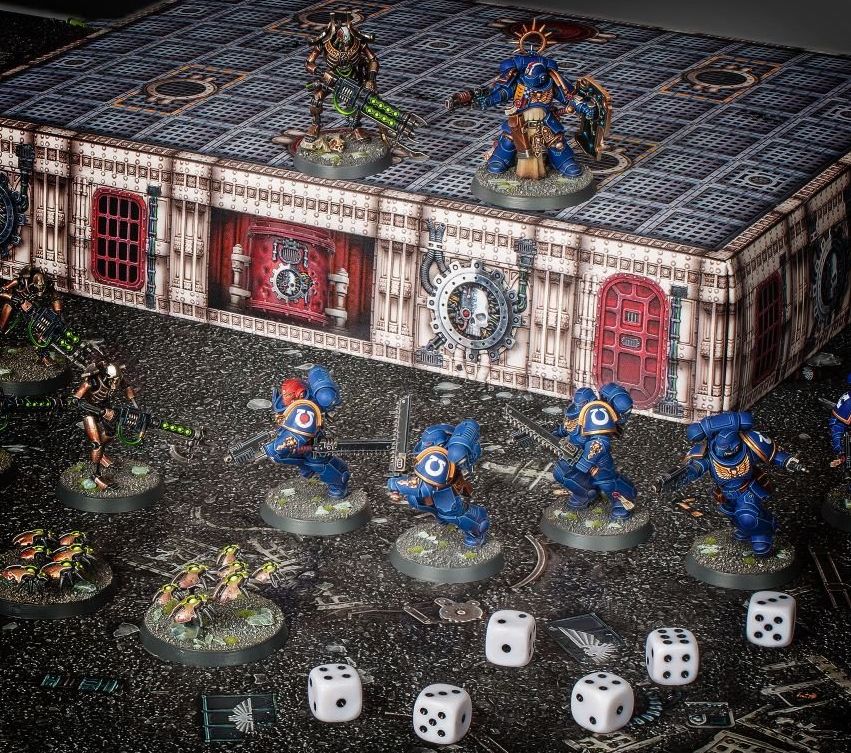 GameCentral offers some advice on how to get into the Warhammer tabletop games, including painting your first figures and cheap starter sets.

Warhammer has become so popular over the last few years that Panini recently released a Warhammer 40,000: Warriors of the Emperor sticker album; for those that would rather collect photos of Space Marines than footballers. If you’ve seen tabletop battles taking place at your local gaming café the idea of a filling a sticker album probably seems a lot easier than creating your own Warhammer army from scratch, but that’s not necessarily the case.

So where to start? Your local board game café is the best place to tap into the massive community, who will be happy to help you in every aspect of the hobby. Many, like my local Bad Moon Cafe, run ‘learn to play’ Warhammer sessions where you can meet like-minded novices. All the dice rolls, plastic rulers, and different stats and abilities may seem intimidating at first but like any game the number one priority in Warhammer is just having fun.

Your first big question will be if you want to play Age of Sigmar or Warhammer 40,000. Formally known as Warhammer Fantasy Battle, Age of Sigmar is a Tolkien-esque world with familiar races like elves, orcs, and goblins. Meanwhile, Warhammer 40,000 features sci-fi takes on many of the same creatures, while adding elite human warriors called Space Marines who are kitted out in complex mechanical suits and battle armies of aliens across vibrant alien landscapes.

How to paint Warhammer miniatures

To help you decide you might want to splash out on these Warhammer Getting Started magazines or Age of Sigmar and Warhammer 40,000, which include all the basic information and a couple of miniatures to help you choose which armies you like the look of best. These miniatures will need painting though, which is the next big step in getting into Warhammer.

The first thing you need to think about before you start painting your Warhammer army is choosing a colour scheme. Start with a white primer/undercoat, which usually comes in a spray can. Lighter colours are on the whole easier to see and look better for beginner painters, especially if you add a complimentary wash colour for shading.

You’ll need to pick colours for basics like skin, metal, and cloth but you might also have to consider bones and tentacles. Make sure to set aside one of your models for a test paint, so you can change things up if you decide there’s a colour you hate. Lots of painters use Citadel Colour paints but we prefer Vallejo Acrylic Paints.

As your painting improves you may want to invest in an airbrush, as it will save you lots of time for bigger projects. Now repeat this process 50 times and you’ll have an army the envy of all your opponents!

Once you’ve had a game and made some friends, you might then choose to commit to a slow grow support group, where you can slowly build up armies in a supportive and organised way. You’re bound to make some mistakes when painting your first few models but sharing your mistakes with others, and learning from what they’ve done, is the best way to get some experience.

There’s plenty of Warhammer enthusiasts, like Henry Cavill, who enjoy the painting aspect of the hobby more than the competitive play. Some even make a career out if it, such as Angel Giraldez, who is renowned as one of the best painters in the fandom.

Once you learn the basics, don’t be afraid to personalise your army. As you get more confidant you can experiment with your builds and use conversions to make gluing and painting less of a chore. Painting can be stressful and competitive but there’s nothing like a Lego head on a Space Marine if you want to take a shortcut and have a unique model of your own.

Don’t let yourself get overwhelmed by buying too much at first – you don’t want this to feel like a job, which it can do with a whole army waiting to be glued and painted sitting in front to you. Start with your army’s rank and file, then move on to calvary or chariots and finally you’ll be confident enough to tackle a centrepiece (usually bound for your glass cabinet, when not being played) such as Supreme Lord of the Undead Nagash or a Gargant, that will tower above your opponent’s army on the gaming table.

How to learn the rules of Warhammer 40,000 and Age of Sigmar

Warhammer has designed a nifty progression route to ease you into the hobby and there are a number of starter sets that are a cost effective way to start playing with the most popular types of units and models.

The most basic box set is the Recruit Edition and it contains two starting armies, with a Space Marine lieutenant and a squad of Assault Intercessors, who you can match against some alien Necron troops. As well as the models, you get a playmat, range rulers, dice, and a step-by-step guide to getting started in your first game. Even the box it comes in is neat, as it’s designed so it can be used as a piece of terrain to add some extra atmosphere.

Once you’ve mastered the basic rules and got the hang of your Space Marines and Necrons, you can expand your forces and play larger games with the Elite Edition. The Elite Manual gives you a wider overview of the game and lore, along with expanded rules for you to use with your new models.

Finally, the Command Edition includes all the models from the Elite Edition, some industrial wasteland plastic terrain (think Mad Max in space), and a softback rulebook which includes all the Warhammer 40,000 core rules.

If you want to expand your existing collection, Games Workshop has some helpful Start Collecting sets, that include a group of miniatures belonging to a specific army at a discount price.

If you’re super competitive it’s always worth collecting the newest army available or research upcoming armies, as generally the rules favour the latest releases. If you are keen on 40K, the new Chaos Knights would be a good army to get into right now.

With the cost of living now on a sharp incline, Warhammer prices might make you baulk but they’re comparable to buying a new video game every month, except without the initial layout for a console. They’re also an investment, as there’s a swift trade in old miniatures selling for at least twice their initial price.

The 40K Elite Edition starter set comes with everything you need for around £65 and the best thing about Warhammer as a hobby is your friends and family will no longer spend hours deciding what to get you for Christmas!

During lockdown I built a Night Goblin army of Gloomspike Gits, Squighoppers, and Stone Trolls. Inspired by the Soulblight Gravelords in the spooky Cursed City box set I’m also currently building an army of undead. Swapping in models from skirmish games such as Cursed City can be a great way to save money, as it’s actually cheaper than buying models separately.

Once you’re a self-certified expert of all things Warhammer, you can branch out into the regular skirmish box sets that have been released lately, like Kill Team and Necromunda: Ash Wastes, for some action-packed gang warfare and vehicle combat, including my favourite ridable giant fleas.

There’s nothing like the feeling you get when you’ve completed your first army and are ready to play, and now’s there’s an ever-expanding, and extremely supportive, community you can be a part of. Before long you’ll be buying early bird tickets to Salute, the UK’s miniature gaming expo, to show off your painting skills and buy more models to start your next army.