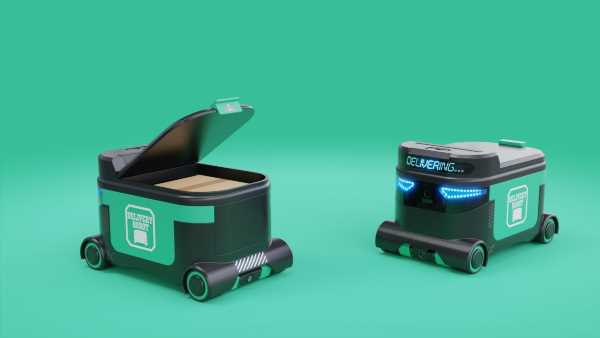 In the mid 2010’s, many were predicting that mass market fully autonomous vehicles were just around the corner. With rollouts of autonomous vehicle prototypes, such as Google’s Firefly in 2014, it was presumed that one of the first large scale commercial use cases for this technology would be driverless taxis, given the size of this market.

Seven years on, however, the promised robotaxi is yet to materialize. Instead, the first truly mass market use case of driverless technology turned out to be autonomous delivery vehicles (ADVs).

Cities across the world are now playing host to ADVs of various shapes and sizes following significant investment from early entrants. This includes Starship Technologies, which operates six-wheeled drink cooler-sized sidewalk ADVs and raised $17 million at the beginning of this year to expand services across university campuses.

Meanwhile Nuro, which operates an on-road vehicle called the R2 that resembles a scaled-down delivery van, has been signing partnerships with companies including Domino’s Pizza, FedEx, and Walmart. The company closed its Series C round in November 2020 having raised $500 million, giving it a valuation of $5 billion.

These investments and big name partnerships have given the ADV market a predicted valuation of $34 billion by 2024, up from $11.9 billion in 2018. Yet, behind these impressive stats lies a problem yet to be fully resolved: that of scaling ADV operations. For every location where ADVs have been deployed, there are many more locations that present obstacles that operators are yet to resolve, from red tape to physical infrastructure.

A patchwork of regulations

It should come as no surprise that existing road transportation and sidewalk regulations were not written to cater to the needs of ADVs. And indeed, this has been a stumbling block towards more widespread adoption of these vehicles.

That said, a number of jurisdictions have been updating their legislative books to accommodate ADV usage. Virginia was the first state to introduce such a law, back in 2017, which essentially granted ADVs similar rights and responsibilities to those of pedestrians. Pennsylvania went one step further by passing a law at the end of 2020 that classified these devices as pedestrians. And a recent study by Axios puts the total number of states that have passed laws granting ADVs similar rights to pedestrians at 12.

But the specifics of each law — such as the maximum dimensions, speeds, and loads of ADVs — can vary greatly by jurisdiction. For example, Idaho and Missouri impose weight limits of 200 pounds, while Utah has no such limit. Then there’s liability and insurance coverage, which again can vary greatly depending on whether or not ADVs are classified as pedestrians.

An even more vexing concern for ADV operators is the risk of individual municipalities drafting their own regulations that are at odds with their own state laws. A scenario where half a dozen municipalities within a single state each have their own set of specific regulations will add significant costs and complexities.

However, there have been some positive developments at the federal level towards harmonizing regulations. The Department of Transportation released its Automated Vehicles Comprehensive Plan at the beginning of 2021, which seeks to provide a regulatory framework to aid state and local lawmakers. What’s more, the states that have adopted ADV regulation to date are the early adopters, crafting policies with few (or no) precedents. The learnings from these states will help inform other states that come later and thus create more harmony between policies. After all, nobody wants to have to reinvent the wheel if they don’t have to.

The process of updating and revising laws and regulations is often an arduous one, but implementing these changes is simple. Once signed into law, that’s it. The regulatory environment is changed instantly. The same cannot be said for updating urban infrastructure to better suit the needs of ADVs. And when considering the lack of pedestrian infrastructure in many cities and suburbs, it’s this factor that could be the biggest obstacle to scaling ADV usage.

The locations of trial services thus far illustrate the type of urban environments where ADVs are best suited. College campuses are a particular favorite — such as the partnership between Grubhub and Yandex, which has launched ADVs across numerous universities, including Ohio State. It’s easy to see why college campuses make such fertile testing grounds; they feature large pedestrian plazas and walkways all housed within a clearly delineated and secure geographical boundary, with few vehicles to get in the way.

Out in the real world, meanwhile, small, orderly, pedestrian-friendly cities such as Mountain View in California are home to trials from the likes of Nuro and Starship. But what about locations that fall either side of the model city for ADV deployment?

On one side, ultradense locations such as Manhattan and San Francisco present plenty of obstacles. Sidewalk-based devices such as Starship and Yandex will simply not be able to safely maneuver around pedestrians on the busiest streets. ADV routes could be confined to a limited number of low pedestrian traffic blocks, but users would then have a limited choice of vendors to order from. And road-based devices such as Nuro’s R2 will struggle to find suitable places to pull over that are close to users’ locations.

On the other side of the equation, very low density suburbs with poor pedestrian infrastructure create other problems that are yet to be overcome. There may be many miles between customers’ homes and the nearest restaurants, stores, or distribution centers. What’s more, sidewalk ADVs may be unable to navigate a route to customers’ homes without having to use the road for sections of the journey, which further complicates matters.

Solutions to many of these problems are within sight. As services like Nuro become more popular in dense, high-traffic urban areas, designated curbside dropoff spaces can be allocated to accommodate them. Urban planners are already having to alter curbside infrastructure by installing electric vehicle chargers to support the adoption of electric vehicles. This provides an opportune moment to also plan for the needs of ADV curbside parking.

Creative thinking is also being applied to low-density neighborhoods and ADV usage. Mercedes-Benz, for example, recently created a prototype mobile distribution center for Starship ADVs, using one of its Sprinter vans. Dubbed a “mothership,” it enables ADVs to be deployed anywhere, and each van can stock different inventory, such as e-commerce parcels ordered within a zip code, or staple groceries. Solutions such as this could provide a network of ADV coverage across large suburban neighborhoods and are extremely scalable.

The weakest link in the chain is the customer

Regulations and urban infrastructure aside, there also remains a far more humdrum problem when it comes to ADVs moving deliveries from A to B: the customer. For automated delivery supply chains to work effectively, there needs to be someone waiting to receive the delivery within a few minutes of the ADV arriving at the destination. And as we all know, this is often easier said than done.

Customers not being home at the time of delivery is a daily problem for the likes of FedEx and Amazon drivers, and the current solution is an imperfect one: leaving parcels with neighbors or in a “safe place” when possible. Food delivery workers encounter a similar problem, especially with orders to commercial or multifamily buildings. And again, the existing solution is imperfect — leaving the delivery at the reception or concierge desk. But as imperfect as these solutions are, ADVs don’t even have these options.

Once again, though, it’s not too difficult to imagine creative solutions to this problem. Most large commercial and multifamily buildings have concierge and reception staff, who are ideally placed to receive ADV deliveries whenever they arrive. ADV operators can develop formal relationships with the employers of these staff, so they’re provided with access codes to devices to unload deliveries. This process can then be complemented with smart storage lockers located within buildings, where concierge staff can leave deliveries, ready for residents to collect at their convenience. Providing such a seamless end-to-end service would be a selling point for residents.

Designing a solution for single family suburban residential units requires slightly different thinking. The most cost effective solution would be tackling the problem up-stream. This can be achieved by delivery apps providing a more flexible and responsive service, where packages are held at local distribution centers until customers indicate that they’re home, or schedule a time in advance for when they’ll be home. The next available ADV can then be dispatched to the customer’s house, knowing there will be somebody home to collect the package.

Ultimately, the growth of ADVs is mirroring the growth of most technology, where the initial rate of innovation outpaces the ability of regulators, lawmakers and other stakeholders to keep up. But as we now enter the phase where this technology begins to mature, we’re already beginning to see accommodations and new thinking across our urban infrastructure, our public policy, and the way we interact with these services.