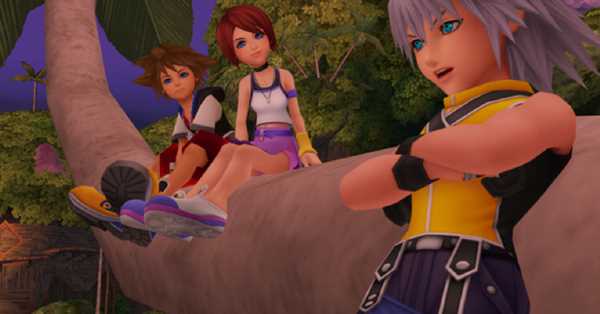 Getting caught up on Kingdom Hearts is a heck of a task. But nothing makes me laugh and cry quite like the crossover fever dream that is this series, no matter how many times I’ve experienced it — and that’s why, whenever I want to revisit the games, I just rewatch all the cutscenes on YouTube instead.

The Kingdom Hearts series is mostly made up of RPGs, and although they aren’t 100-hour time sinks like Persona 5 or Dragon Quest 7, they’re about 30 hours each. I’m not that into the combat grind in these games; the acrobatic Keyblade swinging looks cool in action, but it doesn’t take much more effort than pressing the attack button over and over. That’s all good if you want to sit back and listen to a podcast, or turn your brain off entirely — but the story of Kingdom Hearts is the part I love the most.

Kingdom Hearts made crossovers cool — cursing us all, and itself too

I know what you’re thinking. “Really, Maddy? You like the story in Kingdom Hearts? This is the game with corny Disney movie crap in it. How does that mesh with your love of horror movies and Metroid?” First of all, reader, it’s impressive how well you know me. Second of all, Kingdom Hearts is a comedic masterpiece, and I will go to my grave defending its bizarre setups and oddly paced dialogue.

If you watch all of the cutscenes on YouTube, I’m pretty sure you’re going to agree. You’ll start out laughing at Donald Duck’s retorts and Squall’s gruff-voiced seriousness; there is also nothing like watching Aerith and Goofy carry on a conversation about the nature of existence and magic. But then, at some point, after the first hour or two of patently absurd character juxtapositions, you might realize you like the original characters in this story, too: the childlike joy and innocence of the protagonist Sora, or the emo boy affectations of his bestie Riku. (There’s also a girl named Kairi, but this was two decades ago, when female characters were only allowed to be objects of affection.)

By the time you get to the end of Kingdom Hearts 2, you might even be willing to wade into the significantly weirder waters of the intervening games that bridged the gap between 2 and 3. There will be a lot more lore and a lot more characters with the letter X in their name. And once again, all of it will go down a lot easier if you watch it as a series of cutscene compilations on YouTube — ideally experienced as a background TV show on a second monitor. Let the weirdness wash over you. Luxuriate in it, all the way up to the most recent game in the series, Kingdom Hearts 3. Live through, laugh at, and learn to love the full-length performance of Elsa’s “Let It Go” as experienced by Donald, Goofy, and Sora.

If you ask me, watching the games in this way is a much better experience than watching any of the summary videos that Kingdom Hearts fans have attempted. It’s just not the same to hear somebody else explain how many versions of Xehanort exist in this universe. Maybe if there were an actual Kingdom Hearts anime, I’d recommend that, but since that doesn’t exist, watching all of the cutscenes in video game release order has to suffice.

Did I mention Mickey Mouse is in this series, and he wears a Matrix trench coat? Because he’s a badass? And yes, he still has that squeaky voice? Why aren’t you watching this yet? It’s gold, I tell you. Gold!