Sonic Chronicles: The Dark Brotherhood should have been one of the best RPGs ever. You have a loveable cast of cartoon characters, all with their own unique abilities, living in a world that begs to be explored. Then you get BioWare, one of the best RPG developers of all time, and invite them to give Sonic the same treatment they just gave Star Wars with KOTOR. Couple that with Mario’s own RPG success, and it’s a match made in heaven.

So what the hell happened? Sonic Chronicles is full of contradictions. The gameplay feels just as rushed as the terrible soundtrack, but the writing is some of the best the series has ever seen. The battle system sucks, but it introduced amazing features that the series should have stuck with in later games. It gave us some of the best characterizations we’ve ever seen in a Sonic game, only for it to be ditched and never touched again with a ten-foot pole. Sonic Chronicles is a frustrating example of Sega’s inconsistency, with all the wrong lessons learned from its chaotic, yet once-promising development.

But the best thing about Sonic Chronicles is that it solved the problem the series is still trying to grapple with to this day: there are way too many characters. It’s no wonder that the best Sonic game in years, Frontiers, is the one that trims the cast back down to the main crew, even if it felt a bit too empty at times.

But as we’ve seen with other series, you can get away with having more characters in an RPG, and that’s exactly what Sonic Chronicles did. Starting with just Sonic, you gradually build up your team with familiar faces like Amy, Rogue, and Shadow, as well as the main Sonic crew. But being an RPG, you can introduce them much more naturally, and leave them out of the conversation when they’re not needed. When the plot needs to move forward, we have Knuckles or Tails to exposition dump. When we need a laugh, we’ve got Amy’s daft storyline about moving on from Sonic with a boyfriend she’s clearly made up. Then you shove them all in the not-Normandy and let the player focus on what they want – perfect. 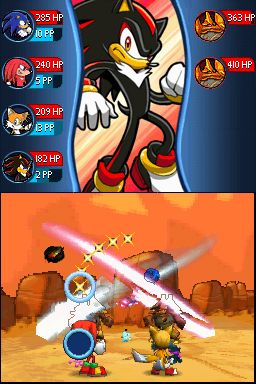 The story wasn’t the problem either. In true Sonic fashion, it starts with running through loops and ends with the invasion of an alternate dimension. On the journey, there are a bunch of fun moments, like teaming up with Eggman to take on this shared threat, and saving Knuckles from being kidnapped by these new mysterious creatures. The space the RPG gives you even lets you choose what kind of Sonic you’re playing as, whether you’re the friend-focussed guy from Frontiers, or the snarky bastard of the 1990s. Unlike other games in the series, you can’t accuse Chronicles of hiding from its roots – it’s definitely not embarrassed to be a Sonic game.

Alas, it was a flop. Worse yet, it’s not hard at all to see why. Even just walking around the map is an endurance test, at best broken up with dialogue, at worst with combat. But that didn’t mean Sega should have ditched the saga as it did. Mario’s only RPG series has had its hits and misses. But when it's good, it’s really good (looking at your, Partners in Time), and the franchise would be a lot worse off without it. 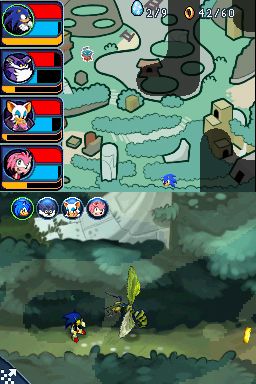 The Mario series is also a lot more willing to be experimental, learning from its mistakes and seeing ideas through until the end. In contrast, the ultra-popular Shadow never received another spin-off after the first one was naff, and Sonic Chronicles is a chronicle of just a single game, ending on a cliffhanger. Even character customization, the one thing about Sonic Forces that everyone liked, will probably never be in the series again because Sega is playing things way too cautiously right now. It only just got back into the masses' good graces, and it doesn’t want to do anything to jeopardize that.

But Sonic Chronicles could work, now more than ever. It’s silly Sonic lore at its most potent, and if we can take anything from the success of the movies, it’s that we want silliness. After all, if you take Sonic’s identity and history away, you’re only left with an out-of-time platforming mascot whose best days are behind him. Sonic Frontiers may have taken some much-needed risks with its gameplay, but the next game needs to step out of its comfort zone with the story. A new Sonic RPG would be the perfect way to do this.