Despite only appearing in 12 out of hundreds of episodes, Q made a huge impact on Star Trek in the '90s. Played with absolute relish by John de Lancie, this godlike extra-dimensional troublemaker loves nothing more than toying with other species—especially humans. Love him or hate him (plenty do), he's one of the most memorable characters in Star Trek history. With a click of his fingers he can alter the fabric of reality, meddle with the space-time continuum, and whisk characters away to other dimensions—or make a mariachi band inexplicably appear on the bridge of the Enterprise. He's unpredictable like that, which makes him a great villain.

I recently wrote about how Star Trek: Picard is garbage, and how the writers somehow managed to make Q, of all people, boring. The fun, mischievous, lovably evil character we delighted in watching torment the crews of the Enterprise, Voyager, and Deep Space Nine is nowhere to be found—replaced by a guy who's just as sad, angry, and one-dimensional as everyone else in the show. It's a wasted opportunity of galactic proportions, and John de Lancie deserves a better comeback. The long-awaited return of Q should have been a landmark moment in the history of the series, but Star Trek: Picard has the uncanny ability to destroy absolutely everything it touches.

Anyway, to remind myself of when Q was one of the best things about Star Trek, I went back and rewatched a few classic TNG episodes. Encounter at Farpoint, Deja Q, Tapestry, Q Who. All classics, and still hugely entertaining over two decades later. Seeing Picard—the real Picard, that is—butting heads with this sneering, omnipotent asshole is '90s Star Trek at its absolute best. But there's another, somewhat lesser known Q story that I decided to revisit as well. In 1996, Simon & Schuster Interactive launched Star Trek: Borg for the PC, an FMV game that is essentially an interactive Q-focused episode where you step into the starring role as a new Starfleet cadet. 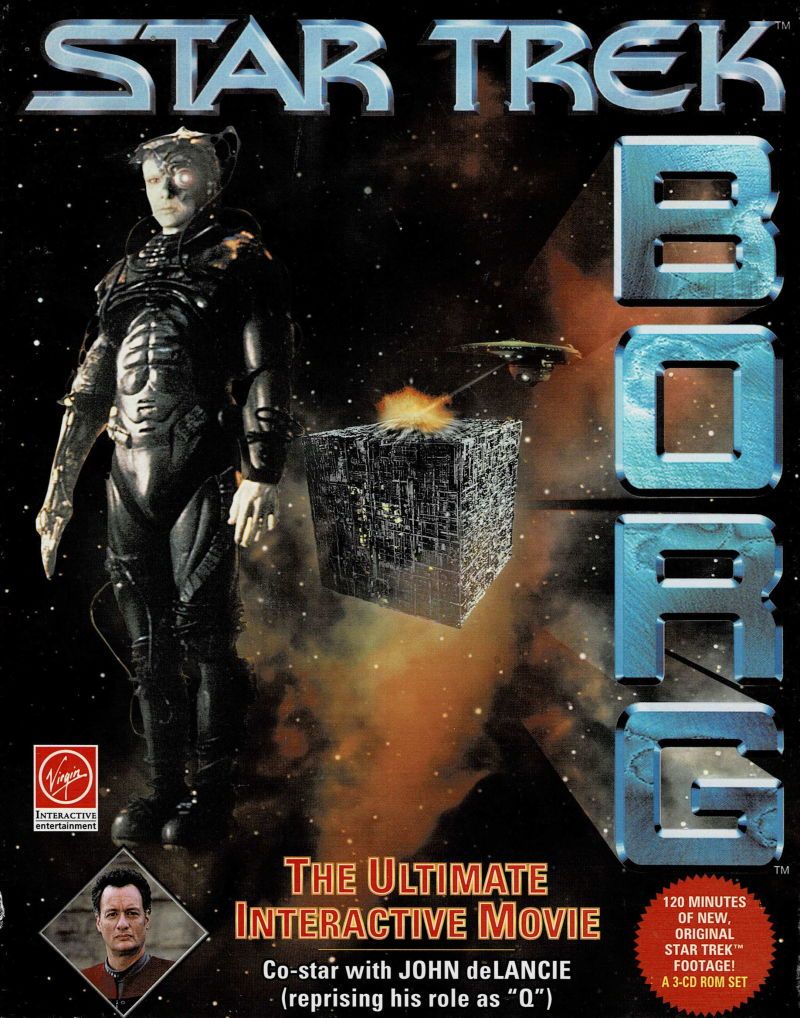 You play as Qaylan Furlong, whose father was killed in the infamous Battle of Wolf 359—a devastating conflict between the Borg Collective and the Federation. The Borg have invaded Federation space again, but your superiors have grounded you, denying you a chance at revenge. This should be the end of your story, but never being one to pass up a chance to meddle in human affairs, Q steps in. He offers you the chance to travel back in time to the Battle of Wolf 359, change history, and ultimately prevent your father's tragic death. I'm not sure why Q would care about the life of some junior officer, but the Continuum works in mysterious ways.

Star Trek: Borg was filmed on sets from Voyager and was helmed by veterans of the TV series, namely writer Hilary J. Bader and director James L. Conway. As a result it's about as authentic as Star Trek games get—and unlike Picard, its creators understood what made Q such a compelling character. This is classic Q: a cackling, prancing whirlwind of reality-altering chaos, with a menacing glint in his eye and an addiction to mischief. This is the character I was looking forward to being reunited with in Picard, but I guess a 25-year-old FMV game that barely functions on a modern gaming PC did a better job. As you might expect, his apparent desire to help you rewrite history and save your father's life isn't all it seems. Nothing ever is with Q.

Star Trek: Borg is, like most '90s FMV games, pretty basic. You watch a low-res, heavily interlaced video sequence, then you're asked to make a choice. This either continues the story or results in a game over. But its high production values, authentic Star Trek feel, mind-bending time travel plot, and the presence of Q elevate it above other games from the period. Make a mistake and you get to see Q gleefully mocking your failure, and an often violent, vividly depicted outcome—whether that's a crew member being assimilated by the Borg or your entire ship exploding. It's worth intentionally making mistakes just to see these scenes play out.

The game also has some fun breaking the fourth wall. If you refuse Q's offer at the start, he clicks his fingers and you're booted out of the game. Not just back to the menu, but back to your Windows desktop. The program just straight up shuts itself down. It's stuff like this that makes Star Trek: Borg one of the most entertaining FMV games of the era, especially for a Trekkie. It's just a shame it's such a nightmare to play these days. I had to install a virtual simulation of Windows 95 on my PC to run it, which I realise is a lot of effort to play an ancient FMV game. But I'd do just about anything for Q—even if that means subjecting myself to Star Trek: Picard every single week.