In the year 489 ab urbe condita, or 489 years after the founding of Rome, General Quintus Marcia Philippus achieved his life ambition. Having led Rome’s legions for nearly four decades, he stood on a beach far from home and watched as Rome’s legions marched through the streets of Syracuse, the triumphant end to a nearly two-year siege. It was a major milestone for the growing Republic, once a loose collective of provinces, now a unified state that stretched from modern-day Tuscany in the north to Sicily in the south. A single lifetime had witnessed the elimination or integration of the Etruscans, the Samnites, the Sabines, the Syracusans, all Rome’s old rivals.

Of course, what Quintus Marcia Philippus didn’t know in this moment of triumph is that Rome’s coffers lay empty and its legions could no longer find the men needed for reinforcements—and just in time to draw the eye of Carthage from across the Mediterranean.

I could swear I heard King Pyrrhus laughing from across the Adriatic.

Rome wasn’t built in a day—nor, as I’ve discovered, was it built in a week. I’ve spent about that long playing Imperator: Rome, and still don’t feel quite prepared to slap a score on it. Like most of Paradox’s grand strategy games, it’s a formidable undertaking, meant to replicate the rise (and fall) of the Roman Republic from about 304 BCE to around 27 BCE.

I haven’t made it that far, in part because I keep starting over. I’ve dabbled, spending time as Ptolemaic Egypt, as a Germanic tribe, as Carthage, and in a few of Alexander the Great’s successor states. 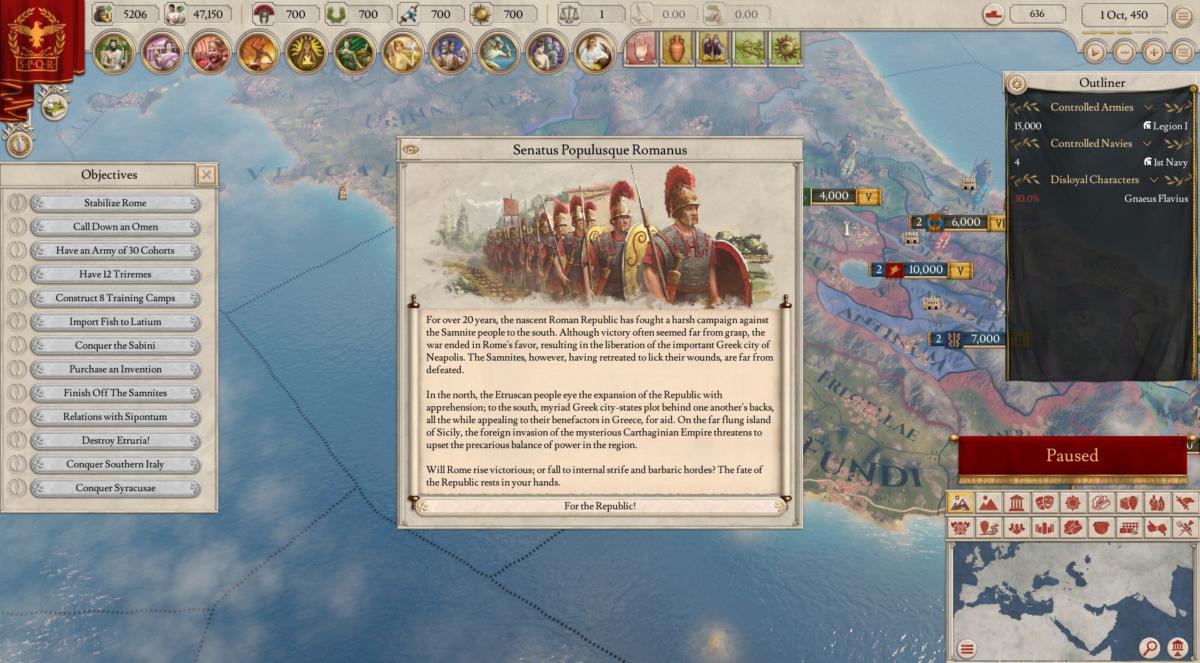 Mostly I’ve played as Rome, though. It’s clearly the focus, and why not? After all, the game’s titled Imperator: Rome. The tutorial steers you right down that path, guiding you through a pseudo-historical reenactment of Rome’s rise, first conquering the Sabines, then the Samnites, the Etruscans, and so on until you’ve taken over Syracuse and become a major power.

Along the way you ostensibly learn most of Imperator: Rome’s systems: how to raise armies, use religious omens to bolster various stats, navigate basic diplomacy and use it to wage war on your neighbors, establish trade routes, and so forth.

It’s a lot of information. It’s also nothing. In classic Paradox fashion, finishing the tutorial leaves you barely better off than when you started. It’s a bit like flying a spaceship to the moon after reading a book about the Wright brothers. Imperator is pretty good at teaching you how to press its buttons, not so much why you should press them, and even as a Paradox vet there were (and still are) aspects that confused me. 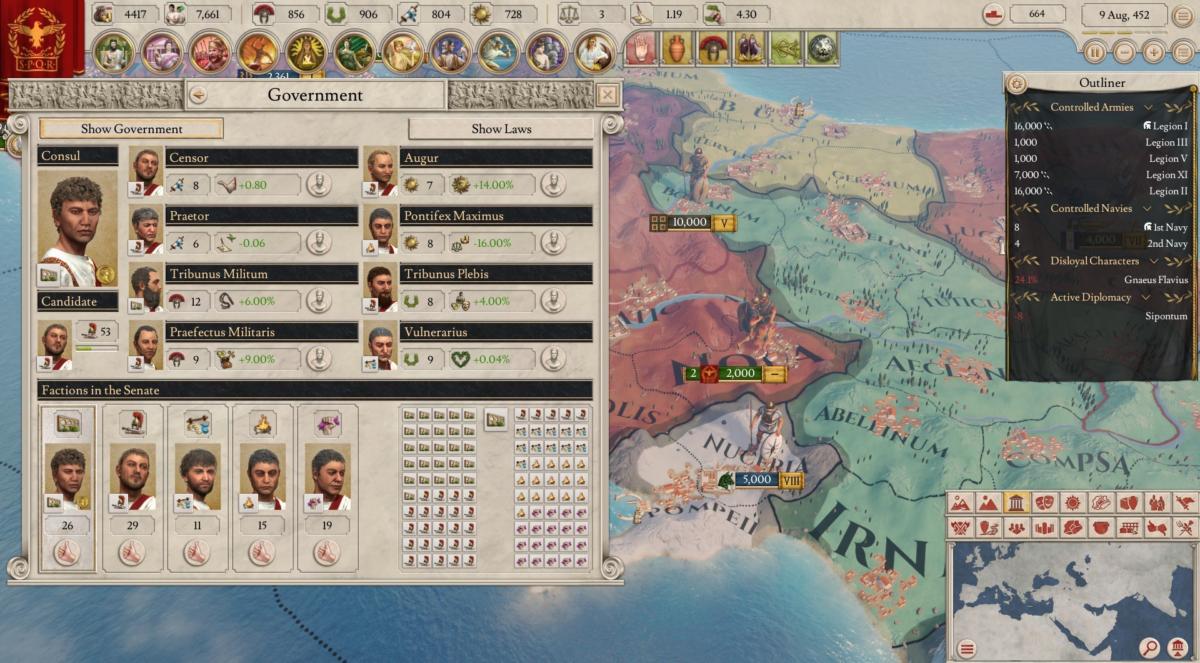 The interface is a significant part of the problem. That’s my first major complaint with Imperator. It’s ugly, for starters, but that could be forgiven if it were useful. So much of the information you want is buried three or four menus deep, or not accessible at all, or accessible only if you zoom out far enough, or contextually if you click on an army first, and so on and so forth. It’s a mess, and makes the already steep learning curve harsher than it needs to be.

Admittedly, Imperator falls victim to its own ambitions. On a geographic level, for instance you have thousands of cities arranged in hundreds of provinces, controlled by dozens of factions. Each city then has pops, an idea lifted from Paradox’s Victoria II, wherein the population is represented by different castes. Here, that means slaves, tribesmen, freemen, and citizens. Each tier of pop comes with different benefits—slaves generate income, citizens research, et cetera.

Pops are then further broken up by culture and religion, so you can have a Roman-controlled city with mostly druidic slaves, Jewish freemen, and a mix of Hellenic citizens that come from Rome, Macedonia, and Etruria. Needless to say, the conquered are rarely happy to live under the conquerors. 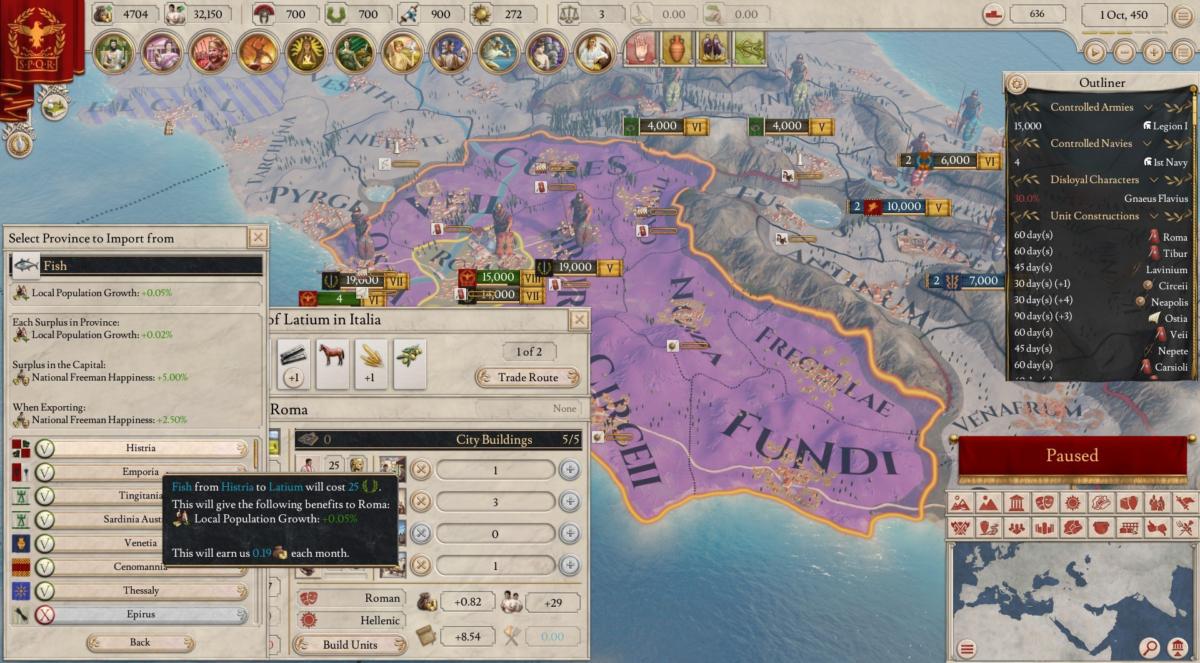 It’s exhausting, and the best results require managing these pops individually, city-by-city, assimilating foreign influences or promoting pops from one tier to another to keep your resource balance intact. And that’s just one system among many.

Imperator has so much going on, the task of elegantly representing all this information seems damn near impossible. Paradox has made an extra effort to improve its tutorials and its interfaces in recent years, and done a good job at it! Europa Universalis IV smoothed a lot of rough edges off Crusader Kings II, and Stellaris did even more to make this once-impenetrable genre seem approachable. So approachable, in fact, that Paradox made a more-than-decent console version of Stellaris. 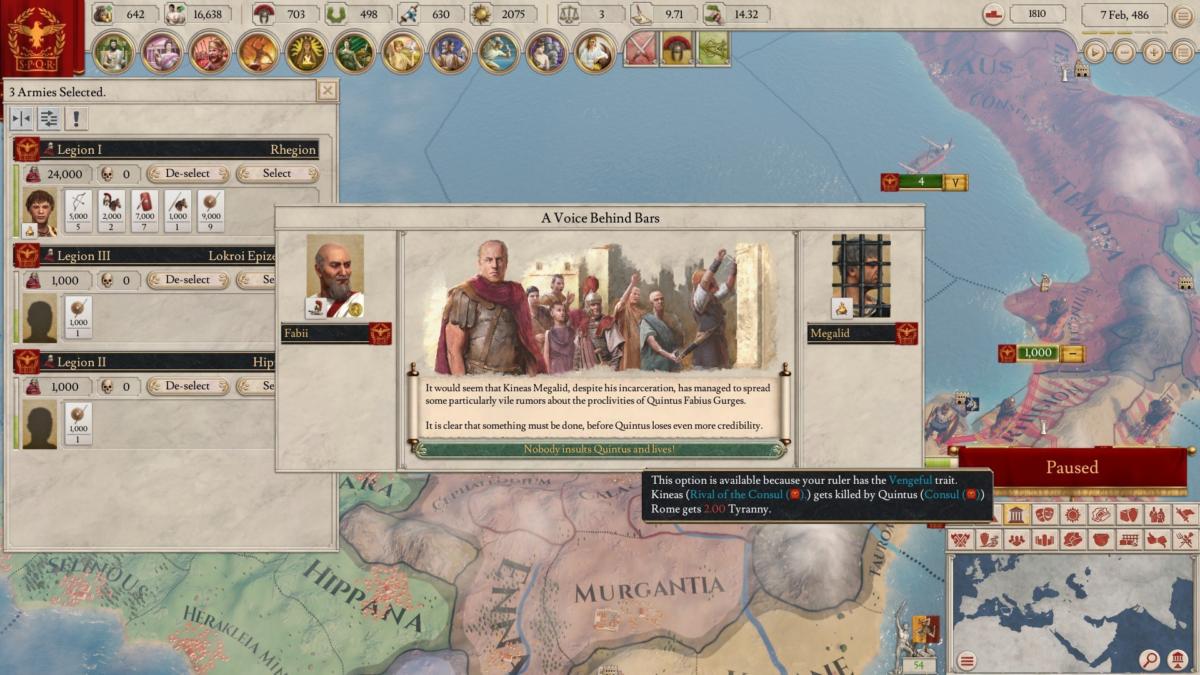 When the pieces come together, it can even surprise you. There’s a neat era-specific army mechanic, for instance that over time sees troops transfer their loyalty from the state to their general. Give a popular and ambitious general too many troops and he’s liable to start a civil war, a neat way of simulating your very own crossing-the-Rubicon moment. Ideas like this help Imperator shine and reveal its latent potential.

So much of it is buried, though. There are so many systems, each reliant on factors from still more systems, dozens of calculations running in the background. Trying to sort out what’s important in this tooltip-laden interface is a lost cause.

Worse, many of these systems feel sketched in, superfluous. I find Paradox’s war-centric games less engaging by default, but even so Imperator feels thin. It’s par for the course with Paradox, and Imperator is but a framework destined to be fleshed out by many years of post-release content. That doesn’t give the present reality any more substance, though. 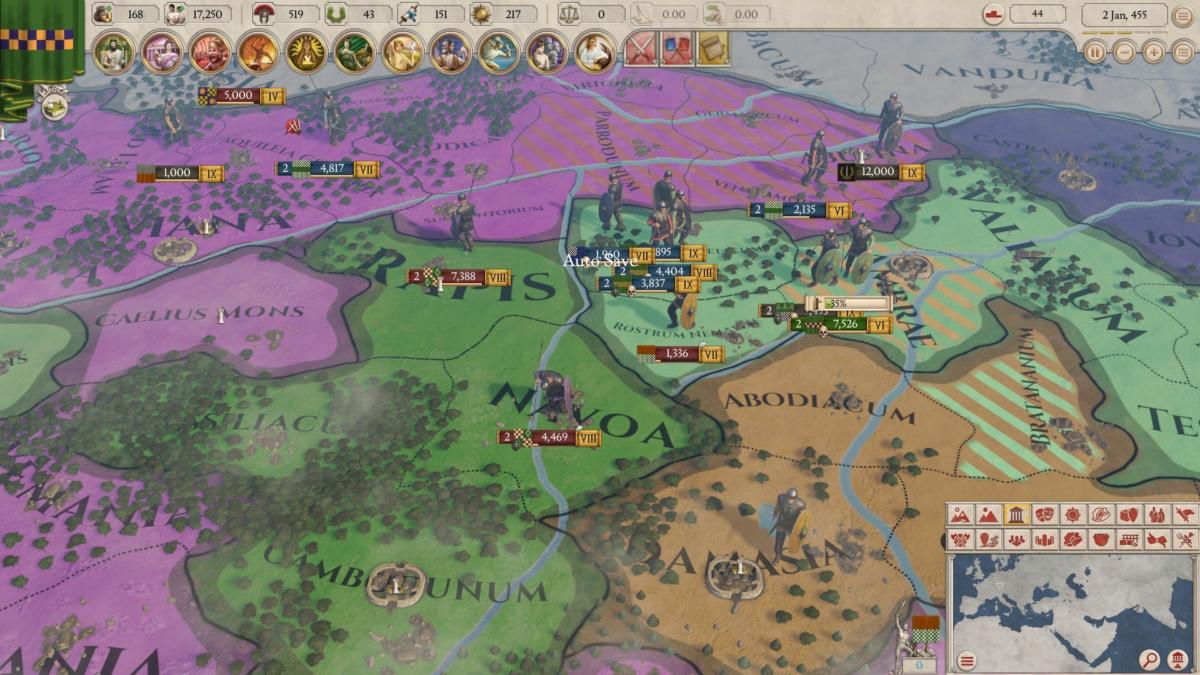 Thus the military angle is more varied than Europa Universalis IV at release, with around a dozen different types of troops—including niche units like camels and elephants, plus the usual heavy infantry, skirmishers, archers, and historically significant types like horse archers. Great, but it’s still a fraction of the complexity in Hearts of Iron IV.

And characters are a neat idea, especially for a Roman-era game. The “Great Man Theory” has largely fallen out of fashion in historian circles, but so much of Roman history is (often by necessity) inextricably linked to these larger-than-life figures—Julius Caesar, Pompey, Sulla, Marius, and even foes of Rome like Hannibal and Pyrrhus.

Paradox was quick to caution before release that this was no Crusader Kings II though, and indeed it is not. There are rivalries and friendships, prisoners and gladiatorial combat, governors and consuls and praetors and all manner of government positions for your noteworthy citizens to take. But none of it seems to matter much, and none of them have much to do. Staving off a civil war is fairly easy if you keep an eye on disloyal characters, at least as far as I’ve played, and otherwise you can mostly let the Senate run itself. 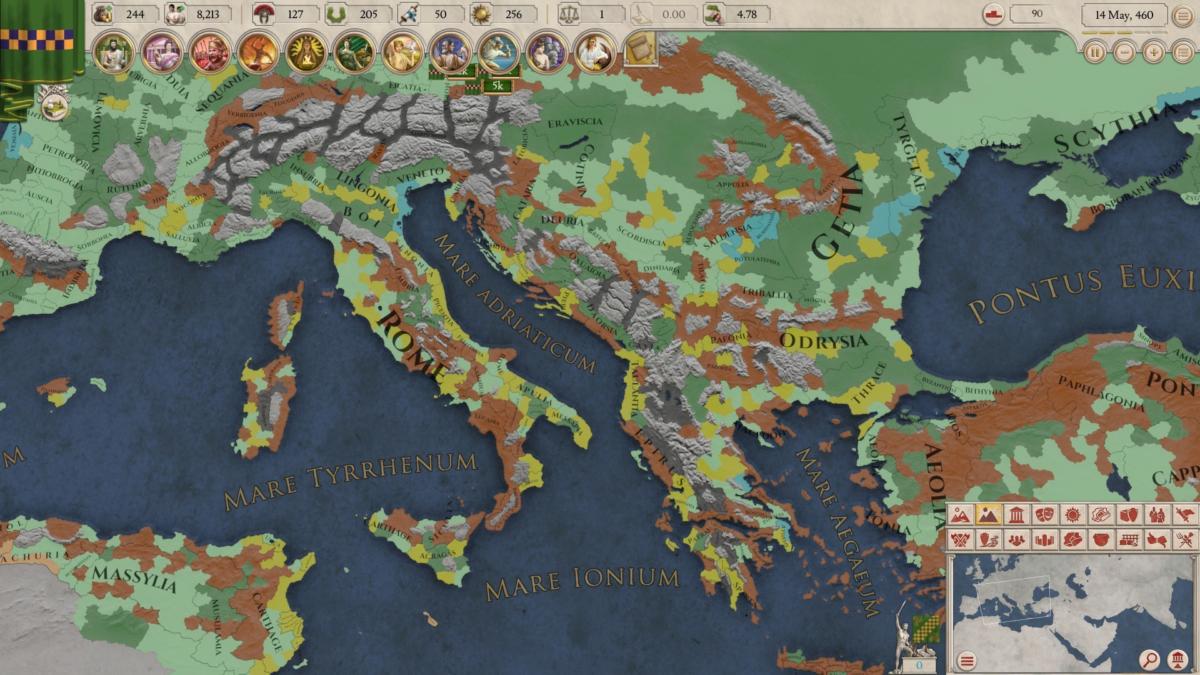 You can create a more civic-minded Rome or a trade-focused Rome, but at the end of the day this is a game about warfare and…that’s kind of it. It’s not about role-playing the inner workings of Rome’s political machine. It’s about making sure you can conquer Carthage and turn the map to Roman red.

It’s fairly successful in that pursuit, but even then there’s not much motivation to expand beyond “I came, I saw, I conquered.” You’re building an empire because that’s what Imperator’s tools enable, and the rest—the population mechanics, the characters, the rudimentary tech trees and religious ideas—are all in service of that goal. And that’s a shame, because so many of those ideas could lead to wonderful games in their own right.

Maybe they will. Again, that’s the question with any newly released Paradox game. Maybe we’ll get that character-centric expansion one day, if enough people clamor for it. Or maybe we’ll see the religious game given new depth. Maybe we’ll see both, and it’ll coincide with the timeline expanding into the Roman Empire period. 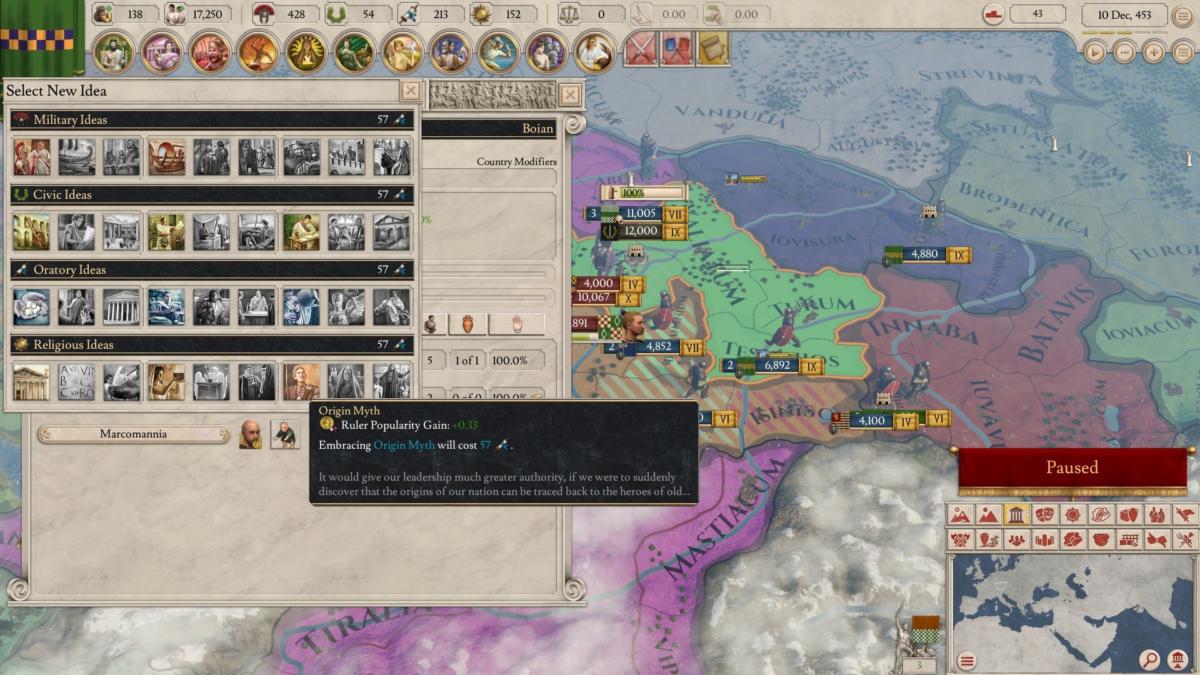 Anything is possible, and indeed a lot of aspects are conspicuously thin, tempting the player to fill in the blanks. As I mentioned earlier for instance, it’s obvious Rome’s been given the most attention early on. Factions get less and less discernible, the lower they are in importance. Carthage and Egypt are pretty solid, Alexander’s successor states are passable, tribes are barely worth playing and exist mostly to squabble among themselves until someone comes along and conquers them.

Diplomacy is simplistic and oddly formal, requiring, for instance, that you fabricate a claim on any territory you plan to conquer—even when that makes no sense, as in Rome’s wars in Gaul, or when sending tribes against one another. Again, it seems like an obvious “Wait for an expansion” window, when more special circumstances will be added.

Hell, we were even advised of one of these forthcoming updates before release. Naval warfare is basically nonexistent at the moment, but Paradox has a sizable patch planned for June that will add new flavor events and give ship battles the same depth as land battles.

All this to say: It has potential. Imperator: Rome attempts to wrangle Paradox’s entire legacy into a single all-encompassing game. It hasn’t got there, not yet, but I know it can get there—and probably will, given Paradox’s track record. It’s just a matter of when.

I look forward to that day though. Roman history has long been one of my favorite periods, and I’d love for Paradox’s simulation to expand enough to immerse myself in it. I want memorable character moments, triumphant sieges and long-running rivalries between world powers, artistic and religious advances that change Roman culture. I want an empire, and I want my crazed kids to fiddle as hundreds of years of history burn to the ground. That’s the promise of Imperator: Rome, a sprawling epic for an epic era. It’s no surprise Paradox hasn’t captured all that intricacy from the start, but like Rome itself, there’s a lot more construction ahead.