Assassin’s Creed III has always carried a dubious reputation with fans, and for many it’s an easy target for derision. I’m a firm believer in the subjectivity of gaming experiences, and it’s clear Assassin’s Creed III simply didn’t hit the mark for many players. But I’ve always really loved the game, from an original glowing review, to my current replay of the new remaster, which just released today. This was a project rich in ambition, bravely trying out an array of new gameplay and systems and setting the stage for the franchise’s future. I believe it’s one of the most consequential entries in the long-running series. Not without missteps, Assassin’s Creed III is nonetheless a game that deserves a second look these many years later.

How did Assassin’s Creed III gain its negative reputation? The flippant internet commenter will immediately shout “Because it sucks!,” and refuse to reconsider their assumption. With respect to divergent opinions, I think that sort of outright dismissal is overly simplistic. By virtually any measure, Assassin’s Creed III is a massive and ambitious game that took all kinds of chances. I’ll be the first to acknowledge that some of those choices didn’t pan out. The resulting final product has a number of issues, and those problems are more noticeable in light of the passage of years and the evolution of design. The famously drawn-out tutorials of the series are particularly troubling here, with long stretches of the early hours of play relegated to introducing concepts, creating significant pacing issues. New features, like wilderness traversal, ship combat, and new hand-to-hand melee options can all sometimes feel unwieldy. And the “full sync” optional objectives are often frustrating. Significant technical bugs that were subsequently patched hampered the fun for early players as well, coloring our mutual memory of the game’s quality.

The game also had a rough row to hoe from the start conceptually, and I think at least some of the hate thrown at the game comes from expectations that were never realized. Connor’s adventure came on the heels of the stellar trilogy of Ezio games, and the magnificent architecture and grandeur of a setting in Europe and the Middle East. By comparison, Connor’s reserved demeanor and America’s humble wooden churches felt like a drastic (and for some, unwanted) departure. Connor’s insertion in the major events of the American Revolution feel especially incongruous to the American gamer, as these historical moments (like Paul Revere’s ride, and the Boston Tea Party) are so ingrained in the mythology we grew up with. Altaïr’s involvement in the Crusades, or Arno’s injection into the French Revolution, are no more or less disruptive; it just feels that way because many of us know U.S. history better. 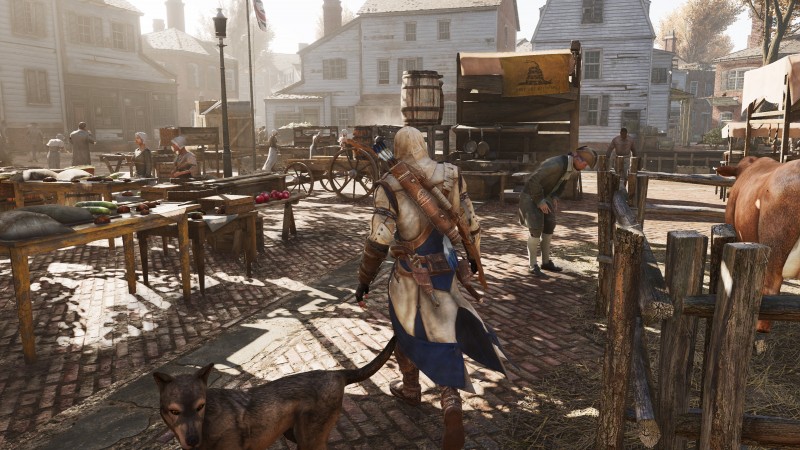 I recommend returning to Assassin’s Creed III not in spite of those problems and perceptions, but in full recognition of them alongside the wealth of awesome experiences the game delivers. This journey across colonial America was a turning point for the series, and the remaster releasing today helps me appreciate the beauty and breadth of the project, thanks to a particularly robust 4K visual overhaul. The frontier wilderness, burgeoning New England towns, and storm-swept Atlantic waves all look especially impressive for a game that originally graced our screens in 2012, thanks to a bevy of improvements, including HDR and physically based rendering for the lighting, new character models, and larger crowds. Even the color palette is broader and richer than the muted blues of the original.

Even before that visual overhaul, Assassin’s Creed III boasted a gorgeous setting. The austere beauty of birch and spruce forests makes for one of my favorite wilderness presentations in a video game. An impressive system governs the passing of seasons from winter to summer and back again for the entire game world, lending the impression of the passage of time that even later games in the series would fail to match. And the cities and smaller communities feel crafted and lively, filled with animals and people going about their lives.

Whether in the cities or out amid the trees and cliffs, Assassin’s Creed III also provides a sense of verticality I especially enjoy. Rock-climbing feels realistic and challenging. Diving from a cliff into the chilly waters of the bay is a satisfying vicarious thrill. Flitting high through the trees along the branches is stimulating, and instills a sense of mastery over the wilderness that sets Connor apart among the many protagonists of the series. 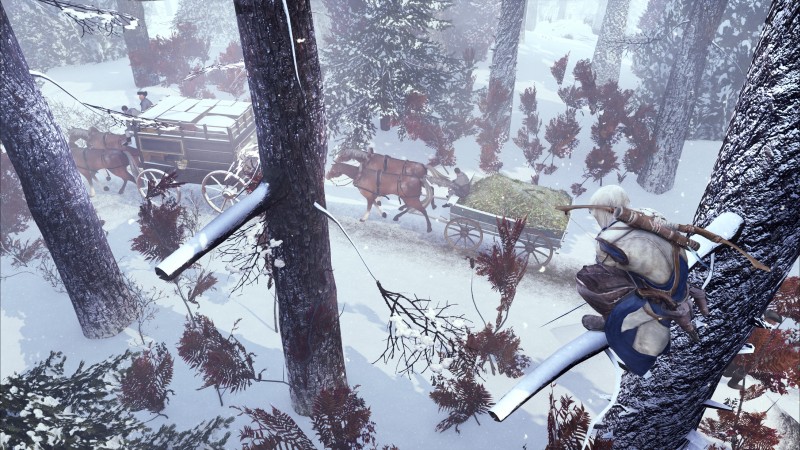 As he perches in trees and stalks the brush, Connor (Ratonhnhaké:ton, if you prefer) also expresses an element of the series that has been largely absent from the franchise’s most recent entries – the feeling of being an apex predator. While Origins and Odyssey feature some intriguing combat, those same systems have lost some of the superhero-esque power that I loved in earlier games. By contrast, Connor is a devastating master of assassination and melee prowess. Battles are tuned so that he can dispatch a whole squad of Redcoats in a flurry of counters and hatchet strikes. Some players hated that unrealistic portrayal of hand-to-hand battle, but I personally adore the power fantasy it evokes. The remaster’s improved approach to stealth (thank you, whistling!) furthers the impression of control and agency over an encounter.

The many tutorials of the early hours are indeed frustrating, preventing the player from building much of a sense of momentum. But a big part of that early-game problem stems from the vast scope of ideas that are being attempted here. Hunting and trapping can be an entire side adventure in its own right. The introduction of naval combat set the stage for Black Flag, Rogue, and even Odyssey. A robust trading system (which has seen some economic tweaks and improvements in the remaster) lets you become an entrepreneur. The homestead missions communicate the sense of a village growing under your cultivation, and reinforces the sense of time’s forward march. Forts to conquer out on the frontier provide diversions from the main story. New weapons can be crafted, feathers hunted in high branches, lost pages caught on the wind, and a seemingly boundless series of other side content waits in the wings.

Assassin’s Creed III is also the entry in the series that offers the most nuanced picture of the conflict between Assassin and Templar. While many players dislike the long opening section with Haytham Kenway, it nonetheless provides a depth and perspective on the story’s villains that makes it all the more compelling later on as you systematically hunt each individual down. The Templars maintain the identity I most like for them: reasoned, calculating idealists who are nonetheless villains because of their inability to accept anyone else’s control over their own lives. On the other side, Connor’s tutelage with Achilles sheds light on the Assassin Brotherhood in new ways, and the main character’s Native American heritage provides a new wrinkle in the diverse spread of heroes the series has given us. 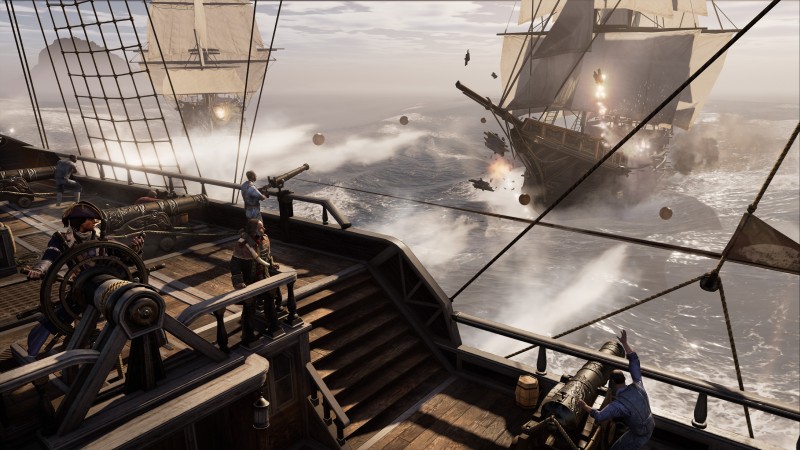 This installment was also by far the most aggressive move into the modern-day storyline that any entry has attempted, and it’s a focus I’ve missed in the franchise ever since. Not everyone loved the direction of Desmond’s closing arc, but you can’t deny the way it doubled down on the drama and action of the modern-day conflict. Desmond has missions in which he is parachuting off buildings and infiltrating Abstergo facilities. He explores an ancient Precursor facility, and has in-depth conversations with projections that reveal crucial elements of the distant past. He furthers personal relationships with characters like his father and Shaun. And in the game’s conclusion, he completes what is easily the most significant beat of the modern story thus far revealed. Later games, whether through wandering a game development studio or overhearing snippets of Precursor dialogue, simply pale in comparison. Only with Odyssey has the Assassin’s Creed series begun to present something more meaningful in this branch of its storytelling, and even that still hasn’t matched the brazen scope of Desmond’s final decision.

Whether it’s Desmond’s arc, the connection of Haytham Kenway to his father Edward (who would star in Black Flag), or Connor’s complicated familial situation, Assassin’s Creed III also celebrated another aspect of the series that has become dormant : the sense of special heritage and a player character that was part of one interwoven link. More recent entries have largely abandoned that conceit, and I miss it. Connor’s path across the American northwest has the flow and scope of an epic hero’s journey, and I love that the broader story up to that point connects him across centuries of blood-related heroes.

If you’re considering digging into the remaster, I’d be remiss to not mention that it’s far more than the base experience of AC III on offer. The full spread of DLC is also built in here, so you’re getting everything from new naval missions to a set of missions about Benedict Arnold. More significant is the Tyranny of King Washington, which stands as one of the most unusual departures in the franchise. This largely standalone alternate history tale abandons real-world historical and power limitations, gifting a preternaturally enhanced Connor with animal powers, and setting him in opposition to a King George Washington overwhelmed and driven mad by Precursor power. It is, quite frankly, very strange. But it’s also an early effort in the series from Ubisoft Quebec, who would later craft both Syndicate and Odyssey. And set in comparison to the fairly straightforward story conceits of recent DLC, like Odyssey’s Legacy of the First Blade, it comes across as positively off-the-wall. 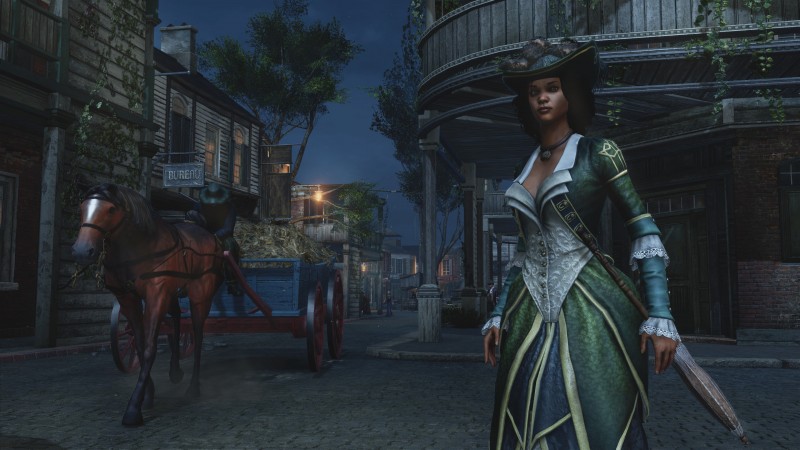 Remaster owners will also have a chance to try out the visually overhauled Assassin’s Creed: Liberation. By most measures, Aveline’s exploits in New Orleans rarely rise to the same tier of gameplay quality that more mainstream entries have achieved.  Nonetheless, the unusual multiple personas, the blowgun, the bayou setting, and of course the first fully-featured female playable hero in the series, all make this an entry that is worth a look, especially since its original portable incarnation meant that many series-faithful have simply never played it to completion.

Whether the motivation is the full offering of additional content, or just a chance to play Assassin’s Creed III at its best, I hope players will set aside some of their earlier conceptions about this entry, and give it a shot once more. With a slower pace than we’ve become used to in games in recent years, and a central hero that is more introspective, Assassin’s Creed III doesn’t match the explosive qualities that some later entries would showcase. But taken on its own merits, this is a foundational entry in the long-running continuity. Warts and all, it remains a personal favorite for me. And understanding what it did right (and wrong) gives a far deeper appreciation for everything else that has emerged from the franchise in the years since its release.