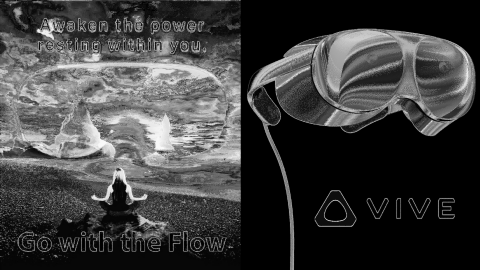 HTC’s latest teaser for its upcoming big announcement shows an almost identical shape to a concept it revealed in early 2020.

The company announced an October 14 event late last month, promising “big news in a small package”. The marketing images so far show a black tube with a thick detachable cap bearing the VIVE logo. Settings such as eating popcorn on a couch and sitting crossed legged in a meditative pose suggest the product, whatever it exactly is, may be focused on passive use cases rather than active room-scale gaming.

The event’s tagline is ‘Go with the Flow’. HTC registered a new trademark, ‘VIVE FLOW’ last month. Statements of Use for trademarks are intentionally wide in scope, but VIVE FLOW’s is almost identical to that of ‘VIVE FOCUS’, suggesting either a new headset or new controllers.

The latest marketing image hints toward Vive Flow being a new headset. And not just any  headset – the shape shown is almost identical to the Proton concept HTC showed in early 2020.

In January of this year, HTC EMEA General Manager Graham Wheeler hinted “we expect to see the rise of All-in-Two devices – lightweight glasses which are connected to a smartphone”, calling this device category “all in two”.

Taking these comments into account, looking at the marketing images for Vive Flow so far, and noting the similarity of the outlined shape to the Proton concept, it’s not much of a stretch to conclude HTC may be about to announce a lightweight viewer headset. Rather than competing directly with Oculus Quest in the room scale interactivity and gaming use cases, HTC could be aiming for a sub-market relatively untouched outside of China. HTC might be able to continue the idea first popularized by Oculus Go (a category Facebook has now seemingly abandoned).

By focusing on passive media applications that already exist on phones, HTC would avoid the need to invest in VR-specific content at the scale Facebook is doing – a battle the comparatively small firm would be unlikely to win.

So what exactly does the black tube have to do with this? It could be a container, a portable battery, a wireless compute unit, or some combination of the three – it’s too early to draw any conclusions.

Would you buy a compact headset designed for viewing media? What are you hoping for from HTC’s big announcement? Let us know in the comments below.