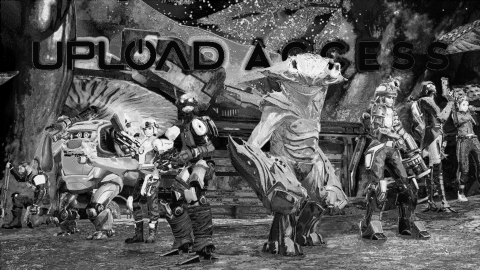 Wondering exactly what you’ll be getting in Larcenauts when it launches this summer?

Larcenauts launches with 8 unlockable specialists. Each is essentially a different class for the game, like the Grenadier (the recently-revealed Salters) or Medic.

Generally speaking, each character has 2 weapon load-outs. It might be that they either have a dual-wielding option for one gun, or perhaps they have a sidearm to go with their main weapon, too. Every weapon in the game also has a secondary firing ability called Overcharge. You activate this by killing enemies to fill a meter.

Each character also has abilities that give them the edge in battle. Some of these refer to specific items, like Unique Grenades or a Deployable Item, like the teleportation device Salters uses. Others are called Quick Skills and are thought of as the character’s primary ability. For Salters, for example, it’s the Charge that throws her into the heat of battle. These work with a cooldown mechanic.

Every specialist in the game has 20 levels to progress through. Doing so will unlock stat boosts to health, movement speed, ammo and Overcharge storage. This will also unlock new Power Slate slots (more on those in a second). Each character also generally has around 4 skins and weapon skins to match.

You can further enhance your character’s performance with Power Slates. You can use up to two Slates at a time (once slots are unlocked) and they’ll modify either your weapons or abilities. Winning games will also help you grow Notoriety, which serves as player rankings. The game will also have Daily and Weekly Challenges for players to complete to help them further their journey.

Every mode in Larcenauts supports 6v6 gameplay and you can play with smaller teams too. At launch there are 3 game modes spread across 4 maps.

The modes include Refuel, in which players steal fuel in hopes of getting off-planet. This is done by controlling different territories on a map that will slowly refuel a ship. DroneHack, meanwhile, is a capture the flag gametype in which players secure a drone and must take it to an uplink point to hack it before it self-destructs. Finally, there’s your standard Team Deathmatch.

Larcenauts releases this summer on Oculus Quest and SteamVR. It supports cross-play across all platforms and, if you’re picking the game up on the Oculus Store you’ll also get both the Quest and Rift version via cross-buy.

We’ve got plenty more on Larcenauts coming this month, so stay tuned and check out the full Upload Access schedule below!