Lollipop Chainsaw turned ten years old this week, which was quickly followed by confirmation that it was "back". This came via a tweet from Yoshimi Yasuda, the game's executive producer and previously the CEO of its publisher, Kadokawa Games. No further explanation was given, leaving us to speculate as to whether that means a sequel, reboot, remaster, or Juliet's own line of bath soaps. There has never been a game quite like Lollipop Chainsaw, and whatever being "back" means, I know I'll be right there with it.

Lollipop Chainsaw is the sort of game that gets mentioned whenever chuds complain about gaming being too woke these days, even though it was written by the Bernie Sanders-loving commie James Gunn, who these chuds also loathe. The idea of 'you'd never get away with that these days' is one I often struggle with. People say it about everything. People say it about The Office, which is one of the most popular shows still streaming. It's Always Sunny in Philadelphia and South Park are two of the biggest shows on TV and we are rapidly being desensitised to violence, sex, and language in our media. Yes, people (and as a result, media) used to be more openly racist, homophobic, sexist, and pretty much any other form of discrimination, but Jayne Mansfield's 1963 movie Promises! Promises! was banned because of a scene where Mansfield is in the bath covered in bubbles. Alfred Hitchcock had to beg for a toilet to be shown in Psycho. Meanwhile 2022's Deep Water sees Ana de Armas give a blowjob and then pick a pubic hair out of her teeth. I'm not really interested in hearing about how 'you'd never get away with it these days', because that only ever holds up if you're talking about something like blackface.

I'm reluctant to go too far and call Lollipop Chainsaw a feminist subversion of tropes when the major figures in the game’s creation were all men, but it's a hugely popular game with women. Not only does it have a female lead, a rarity ten years ago and to an extent still today, it's a completely different type of female lead. Most women at the front and centre of video games need to trade away their femininity in exchange for the spotlight. They need to be rugged, masculine characters with no time for emotions or looking pretty – they just get the job done. These characters have a place, but they can't (and don't) represent all women. It's a little bit of a toxic 'I'm not like other girls' attitude to think female video game characters can only be successful when they subscribe to the same mores as men. 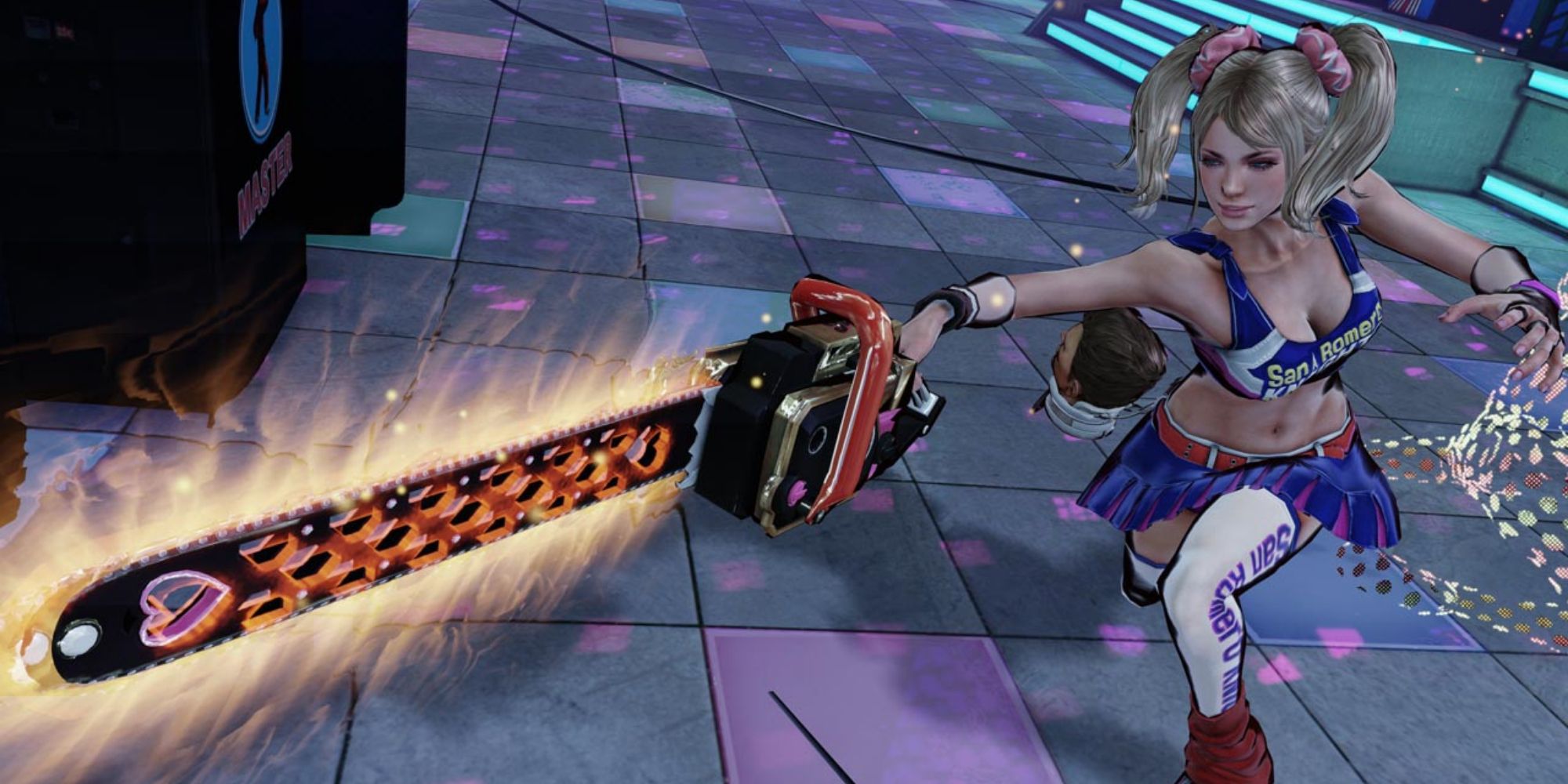 Juliet is a bimbo. With her blonde bunches, thick lip gloss, cutesy voice, and short skirt, she is unapologetically herself in every way. The brand of feminism touted by Kim Petras' Slut Pop, Lil Mariko's Hi I'm A Slut, Becky G's Mala Santa is not for everyone, but there are legions of women and girls who see the representation and empowerment they offer. Bella Thorne, Amouranth, Nikita Drugun, and Kylie Jenner are all part of this tapestry too. Lollipop Chainsaw was gaming's answer to WAP eight years before WAP existed. We don't need all characters to be like her, but we damn sure need more of them, especially in leading roles.

There were, of course, some issues. The upskirting Achievement/Trophy undercuts how progressive Juliet could be, but most of the time she's in on the joke. Lollipop Chainsaw was also incredibly stylised, which lends it a sense of timelessness, and its raunchy sensibilities – transgressive in their extreme centering of female agency a decade ago – have avoided awkward ageing thanks to the game's commitment to Juliet as a character. It's important too to remember how much the game evolved in our hands. A lot of modern games which give us huge worlds to run around in sacrifice character progression, only giving upgrades as a means to scale a wall or break down a barrier that only exists to slow progress. Lollipop Chainsaw was constantly throwing new attacks, combat scenarios, and abilities at you right until the end. It wasn't quite It Takes Two levels of eccentricity, but a lot more is crammed in there than players whose only memory is looking at the cheerleader's panties might recall.

If remade today, the costumes might come in for a tune up, but to be honest, not by a lot. It's bad to always sexualise female characters, but it's almost as bad to never sexualise them. Petras, Thorne, and all of the other women I listed a few paragraphs up wear very similar outfits in their media appearances. Rihanna is regarded as one of music's most elegant role models, yet has attended multiple award shows in dresses that reveal and accentuate her nipples. If you put Aloy in a clam shell bikini, or Dani Rojas in a vinyl catsuit, then yeah – you're doing it wrong. But these are what Juliet and women like her choose to wear. There's definitely a sense of the male gaze in certain framing that a sequel would do well to temper, but it's the same sort of framing we might see in a Becky G video anyway.

Lollipop Chainsaw was an incredible game that offended nobody, and yet its decade of radio silence is repeatedly blamed on woke politics ruining games, and not the fact that Grasshopper is far from the most profitable or prolific studio, both Suda51 and James Gunn have been extremely busy on other projects, and that similar cult hits like Bully have also been relegated to one and done status. As a member of the woke cabal ruining video games for you all, take it from me, we want Lollipop Chainsaw back as much as you do. Is it really that hard to get video games to treat me like a slut?