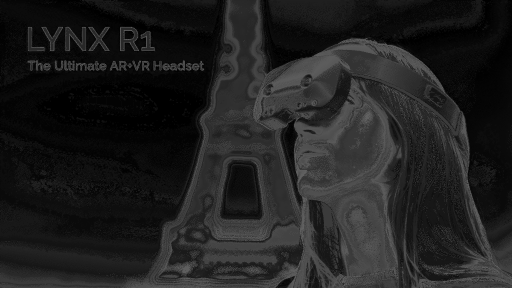 The device is promised for pledges above €530, equivalent to just over $600.

Lynx R1 was initially announced in February 2020 as a $1500 product focused on businesses and professionals, but in July of this year the company announced a radical strategy shift, removing eye tracking to significantly reduce price and target consumers too.

For better weight balance the battery is located in the rear, and the company says it should last two hours of active use between charges. While AR mode lets you see the real world, you can also flip up the headset without having to take it off or awkwardly balance it on your head.

The package includes a VR facial interface to block out light from the sides when playing virtual reality content.

Two dedicated IR cameras on the front of the headset enable Ultraleap hand tracking, the device’s primary input method. By pledging €99 (around $115) extra you can also get a pair of tracked controllers, produced in a partnership with FinchShift. These controllers don’t actually have LEDs for the headset cameras to follow – instead their accelerometer & gyroscope (IMU) data is fused with hand tracking.

Like Oculus Quests, Lynx R1 runs a modified version of Android and will have a boundary safety system similar to Facebook’s Guardian. Lynx has its own SDK, but also plans to support OpenXR content in Q4 of 2022. The app store on Lynx R1 will offer VR apps, AR apps, and even apps that can switch between each.

UploadVR plans to get hands-on with Lynx R1 in the coming months to bring you our impressions.