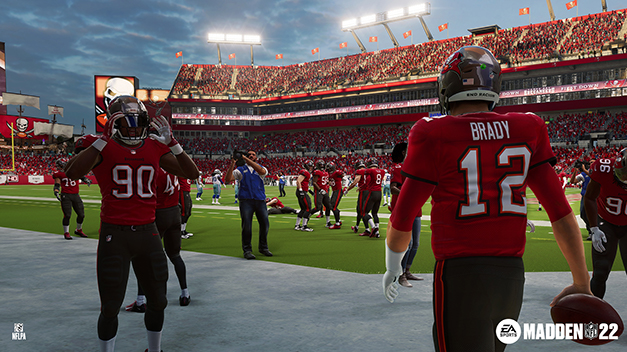 GameCentral reviews EA’s first new sports sequel of the year and finds a game weighted down by the success of Ultimate Team.

The Madden series, like many annually released sports sims, has issues. How do you refresh a franchise that has run for decades? How do you innovate when fundamental problems remain? Fans expect a lot, which is not unreasonable when you consider the billions EA Sports rake in every year, but recently they’ve not been getting it.

The bare minimum, you might expect, is a release that runs smoothly, builds the foundations for the 12 months ahead, and seizes an opportunity to be the first major sports sim to really embrace next gen capabilities.

From what we’ve seen so far, Madden 22 has struggled to hit those notes.

Madden 22 feels tired and yet on the face of it EA seem to be trying everything possible to re-energise football fans and reach new audiences. By doing so though, Madden 22 spreads itself thin.

There are notable new features, led by M-Factors (the M stands for Momentum), a solid idea that helps you take advantage of big moments and establish dominance over your opponent. The M-Factor meter swings your way if you throw a touchdown, snag an interception or force a fumble, and the consequences can make life difficult for your opponent.

Take, for example, the Denver Broncos’ M-Factor ‘Mile High’. If, as the Broncos, you swing your momentum meter in your favour, ‘Mile High’ triggers, negatively impacting your opponent’s stamina, which is meant to replicate the draining real life conditions of playing a mile above sea level at their Empower Field.

The concept is sound but it leaves you wondering whether it is something Madden fans will really get onboard with. Take the competitive scene, as an example. There, it’s about your skill being the difference-maker, not a system designed to replicate things like home field advantage, so it remains to be seen how that will be received.

As a simulation Madden usually stands out for its broadcasting and the way in which it captures the showtime feel of watching a big NFL game on TV. And yet while Madden 22 certainly ramps up areas of the matchday experience – crowd noise and atmosphere stands out – portions of the commentary lack sparkle and feel like they’ve been recycled.

Graphically, Madden 22 is as impressive as it has been in recent years, which is to say, it’s hard to point out obvious improvements. We reviewed the game on the PlayStation 5 and went in expecting to be blown away but were left largely unimpressed. So far, there has yet to be a sports sim, beyond the NBA 2K21 next gen update, that has really taken advantage of the power available and that’s a shame.

There are still numerous clipping issues, something you might have hoped to have seen the end of, and seeing players clip through chunks of the stadium, or opponents during collisions, ruins the gameday immersion.

A lot of this is likely legacy coding issues from a franchise that at its core doesn’t go through vast changes year on year, and it’s beginning to show. The Madden 22 launch has been rocky and hardcore fans have been quick to point out a number of flaws and glitches. EA has even seen real-life NFL players send tweets their way, sharing their disappointment. It’s a bad look, and whilst some of these won’t be picked up by more casual players we’ve been affected by issues across all of the game modes.

Superstar KO returns for its third appearance in Madden and is great for a quick blast of arcade-y head-to-head action. There’s not much depth to the mode but that’s not really the point, it’s about having fun, playing with some of the best players on the game, and trying the outrageous. And it achieves that.

Franchise mode certainly has more depth to it this year, something bound to please the core base of Madden fans who hold Franchise mode as dearly as PES fans hold Master League. The addition of offensive and defensive coordinators, and how that ties into your gameplan for the week ahead, gives this mode a layer of depth that’s not been seen in years.

And yet just as you start to believe #FixMaddenFranchise had the desired effect, you’ve got scouting, with all its potential, not even in the game until September.

Ultimate Team is where EA makes the bulk of its profit, not just in Madden, but across its other titles too, but this year’s launch has been a disaster. An enormous bug has seen players gifted thousands of cards, something so unfathomable (and indeed unfixable) that EA had to close the auction house for around 12 hours on launch day.

Even without that particular bug, it has been an inauspicious start for Ultimate Team. Naturally it takes time for this mode to build to a crescendo – the idea being that the best cards are released further into the game’s life cycle, providing enough content to carry your fanbase to Madden 23 – but the early signs suggest it might be more pay-to-win than ever before and that’s saying something.

For starters the Solo Battles rewards have been lowered, making the mode itself even less fun than it already is, whilst Head-to-Head XP rewards come in so lean now that you can end up with nothing at all if you lose. For the casual Ultimate Team player, there really isn’t enough content to keep you happy. Solos are a grind and that’s part of the enjoyment of MUT, but when the reward purse strings are tightened year after year you start wondering what the point of it all is.

Invariably, the answer ends up being the store where, same as last year and the year before that, Madden fans are seen only as customers with wallets that need emptying. There really isn’t much else to be said at this stage when it comes to EA and microtransactions. The model works. It works across all their sports titles and until consumers stop paying, it will continue.

If fans keep buying the game it’s unlikely that EA will concern itself with complaints about facing too many ‘God Squads’ when you’re just starting out in Ultimate Team. Is it fair? Absolutely not but as long as the money keeps rolling in, it won’t change.

So where are we at? There is a lot of content still to come (Scouting in Franchise Mode, inevitable glitch fixes and patches, etc.) and although the vast majority of it will be in Ultimate Team, it’s only fair to caveat this review by saying Madden 22 might get better.

Right now though, it’s unmemorable. Details matter and unfortunately this is a game riddled with technical problems, glitches and launch issues. Will you be blown away if you were handed a controller and thrown onto the gridiron? Probably not.

It feels like something is missing. The broadcast is tired, aside from a few amusing anecdotes here and there, and it leaves you wondering where EA’s enormous resources were allocated. The logical conclusion, led by the many garish promos thrown at you at every turn, is Ultimate Team, but even that lacks depth and feels overly familiar.

Madden 22 continues a theme in the sports sim world: what next? How can you innovate if you are so chained to a cash cow like Ultimate Team? It’s a wider question for the whole sports gaming landscape but right now, Madden NFL 22 feels like groundhog day.