If you're a Magic: The Gathering player who likes sacrifice effects, removal, and slowly destroying any trace of hope in your opponents, black cards are probably for you. Mono-black decks often focus on the idea that power comes at a price. You may have to trade life or sacrifice your own creatures to trigger an effect, but when used correctly, those effects can pull off some ridiculously powerful combos that leave your opponents wishing they had stayed home from game night.

If you’re a fan of gigantic slugs, hordes of the undead, and sacrificing your own creatures to build your power, you might want to consider running mono-black for your next historic brawl deck. 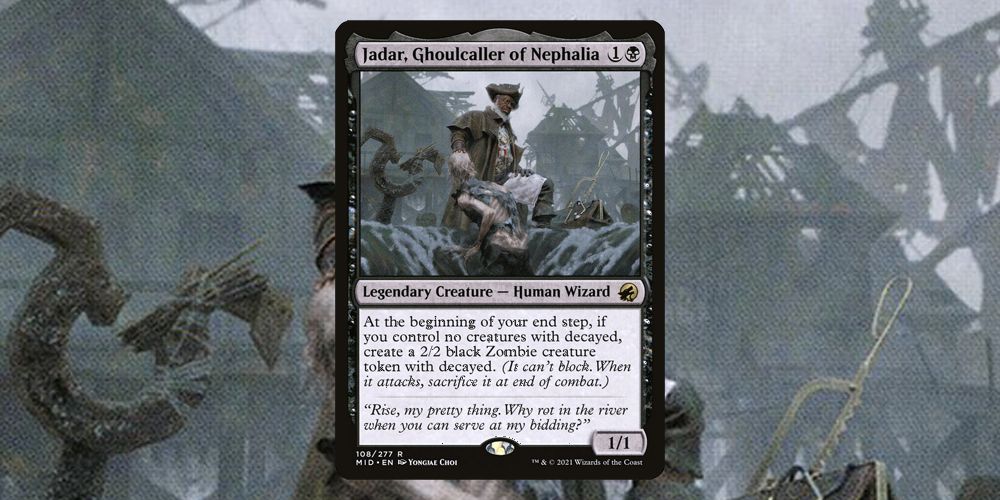 Jadar is a solid commander option if you’re looking to go with a sacrifice or Zombie theme. At the beginning of your end step, if you control no creatures with decayed, Jadar allows you to create a 2/2 Zombie creature token with decayed.

Although he misses out on some powerful Zombie synergies by not having access to blue cards, there are more than enough black Zombies to assemble an undead army. Jadar’s ability gives you constant access to sacrifice fodder which allows you to make the most of powerful Zombies like Fell Stinger and you can lean into the sacrifice theme more by adding cards like Eaten Alive and Morbid Opportunist. 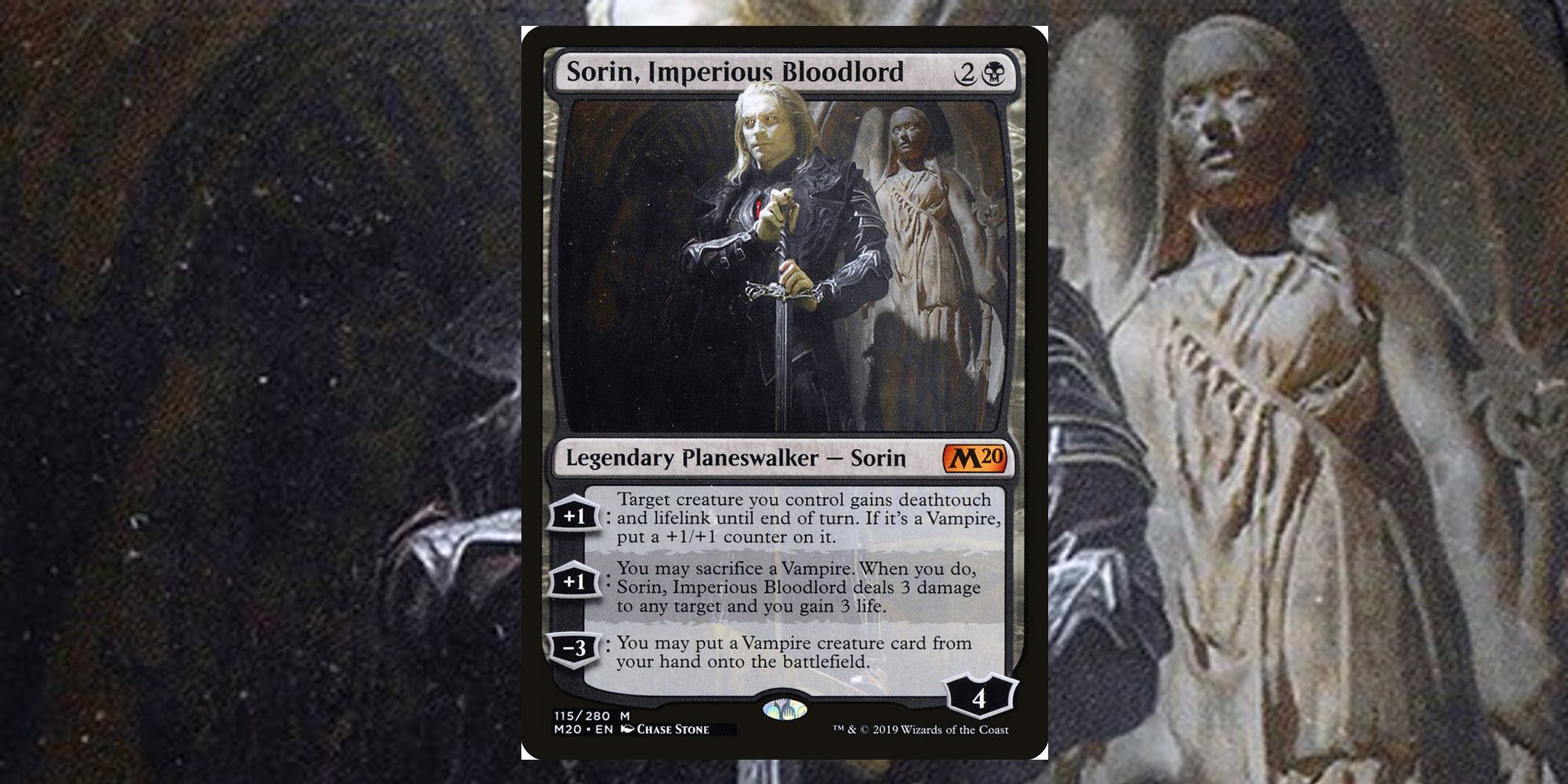 One of the fun things about brawl is being able to use any legal Planeswalker as a commander. Although there are quite a few Planeswalker options in mono-black, Sorin, Imperious Bloodlord comes out on top for his low cost and powerful abilities. Costing only three mana, Sorin is one of the lowest costing Planeswalkers available which is perfect for a commander.

Vampires are one of the most powerful tribes in Magic: The Gathering and all of Sorin’s abilities synergize perfectly in a bloodsuckers-only deck. Giving lifelink and +1/+1 counters to your Vampires ensures you’ll be able to make your life total skyrocket. Sorin’s ultimate ability is a great way to cheat out high mana value vampires from your hand before your opponents have any way to defend themselves. 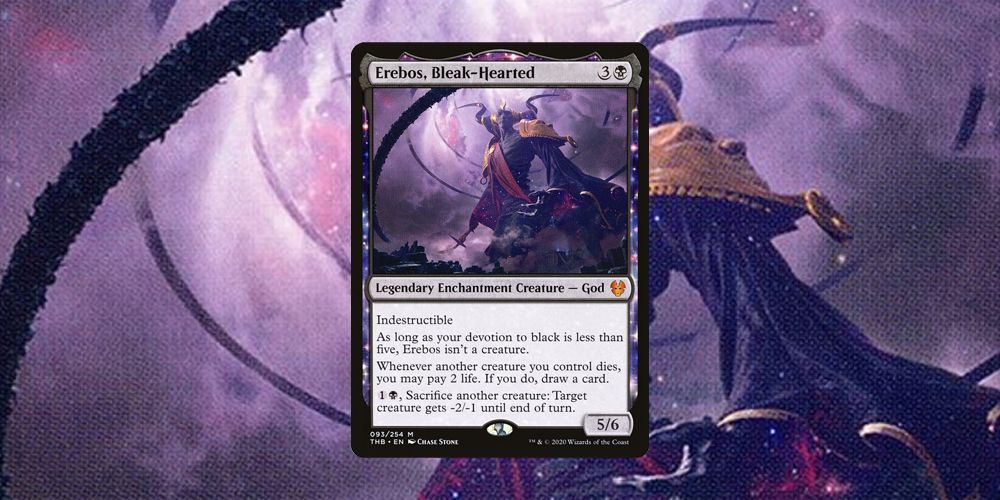 Card draw is one of the best ways to give yourself an advantage over your opponents. Erebos, Bleak-Hearted wants you to run a sacrifice-heavy deck, allowing you to pay two life every time a creature you control dies in exchange for drawing a card. Erebos's abilities work perfectly in tandem, allowing you to weaken your opponents' creatures to pull off some sneaky combat tricks while giving yourself card advantage.

Your strategy should center around getting out cards and creatures that give you added bonuses whenever you sacrifice to get the most value out of Erebos's first ability.You’ll want to be sure to run some lifegain in this deck because it will center around Erebos’s card draw ability. Luckily, that’s not hard to come by in mono-black. Running cards like Bastion of Remembrance and Nighthawk Scavenger will make sure your life total doesn't drop too low. 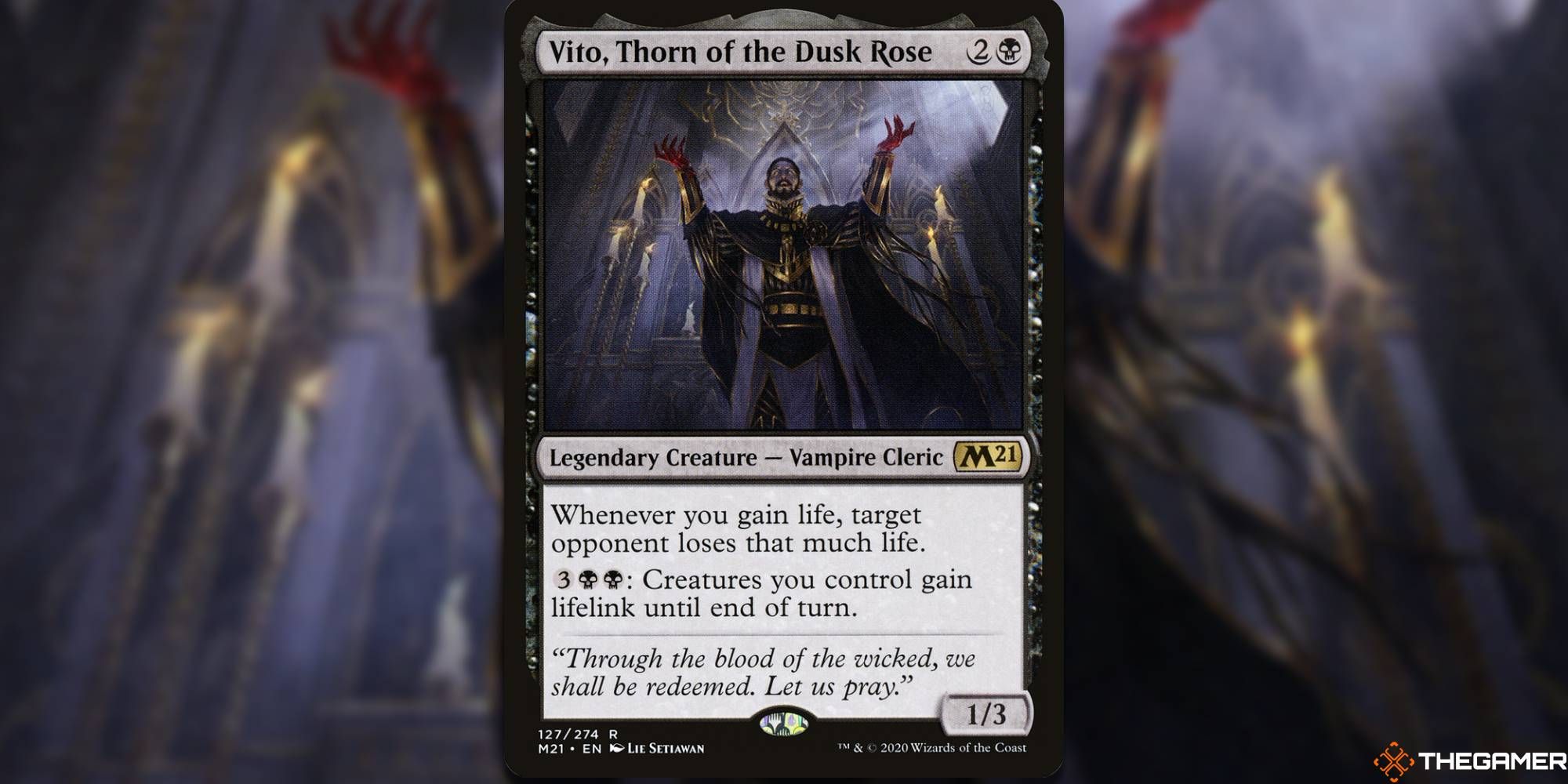 Life gain and life loss is a huge theme in mono-black. Vito, Thorn of the Dusk Rose encourages you to gain as much life as possible to slowly drain your opponents of theirs, which is very fitting for a vampire. Whenever you gain life, each opponent loses that much life. Cards like Gray Merchant of Asphodel will effectively double the amount of life your opponents lose.

Vito’s second ability can end the game very quickly if you manage to build a wide enough board. It costs five mana to give all of your creatures lifelink. Then you can swing in for lethal damage at one opponent, drain the life from the others with his first ability and boost your life total to untouchable numbers. 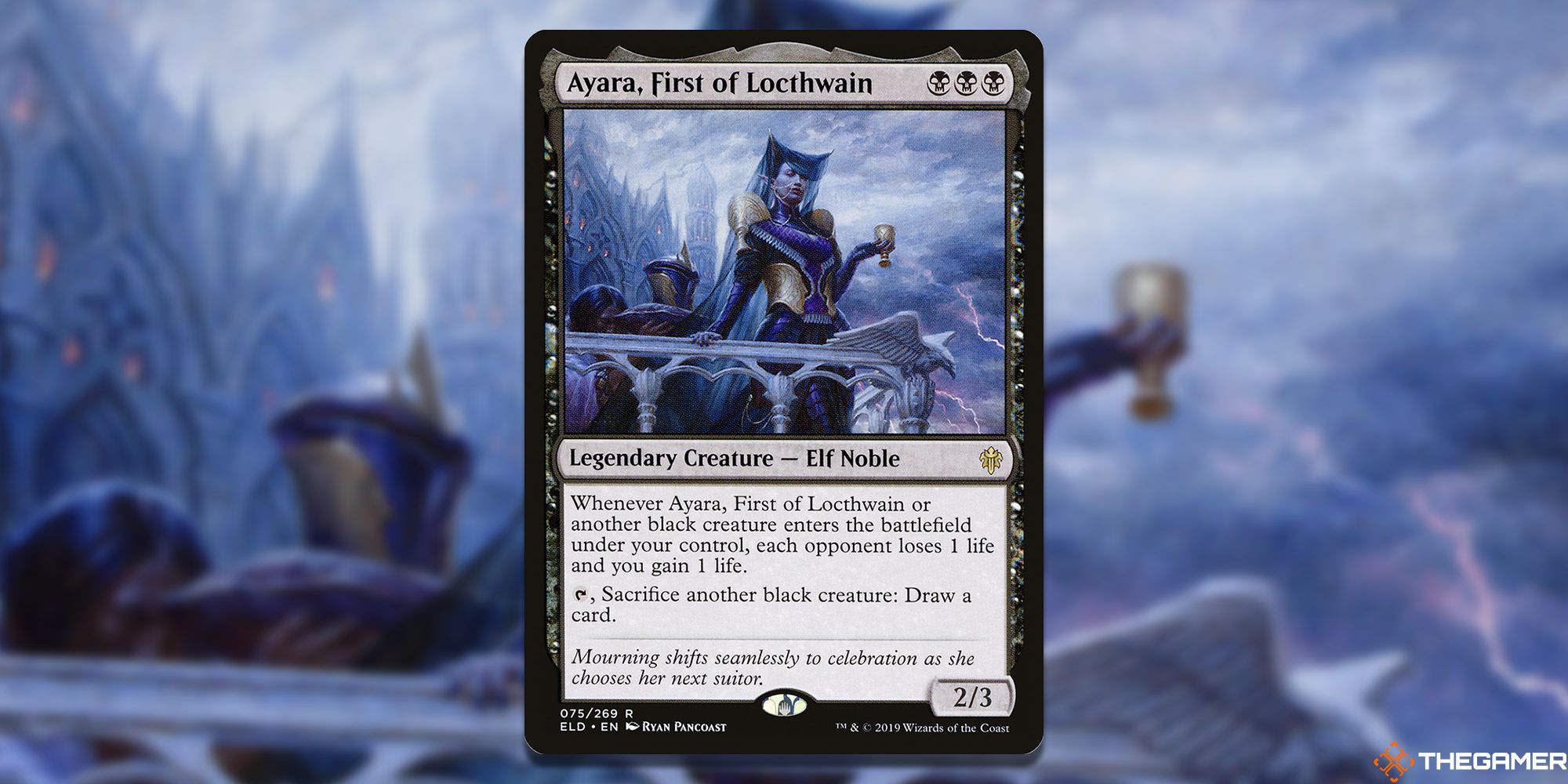 Ayara, First of Locthwain is similar to Erebos as you’re encouraged to build a strategy around sacrificing your creatures. Whenever a black creature enters the battlefield under your control, you gain one life and each opponent loses one life. This deck works best when you use cards like Chittering Witch and Rise of the Dread Marn to dump lots of black creature tokens onto the battlefield at once.

This strategy allows you to gain huge amounts of life, make all your opponents lose the same amount of life and gives you plenty of sacrifice and block fodder. You can also run creatures like Reassembling Skeleton and Cult Conscript to make sure there are always sacrifice options to activate Ayara’s second ability, giving you a card advantage. 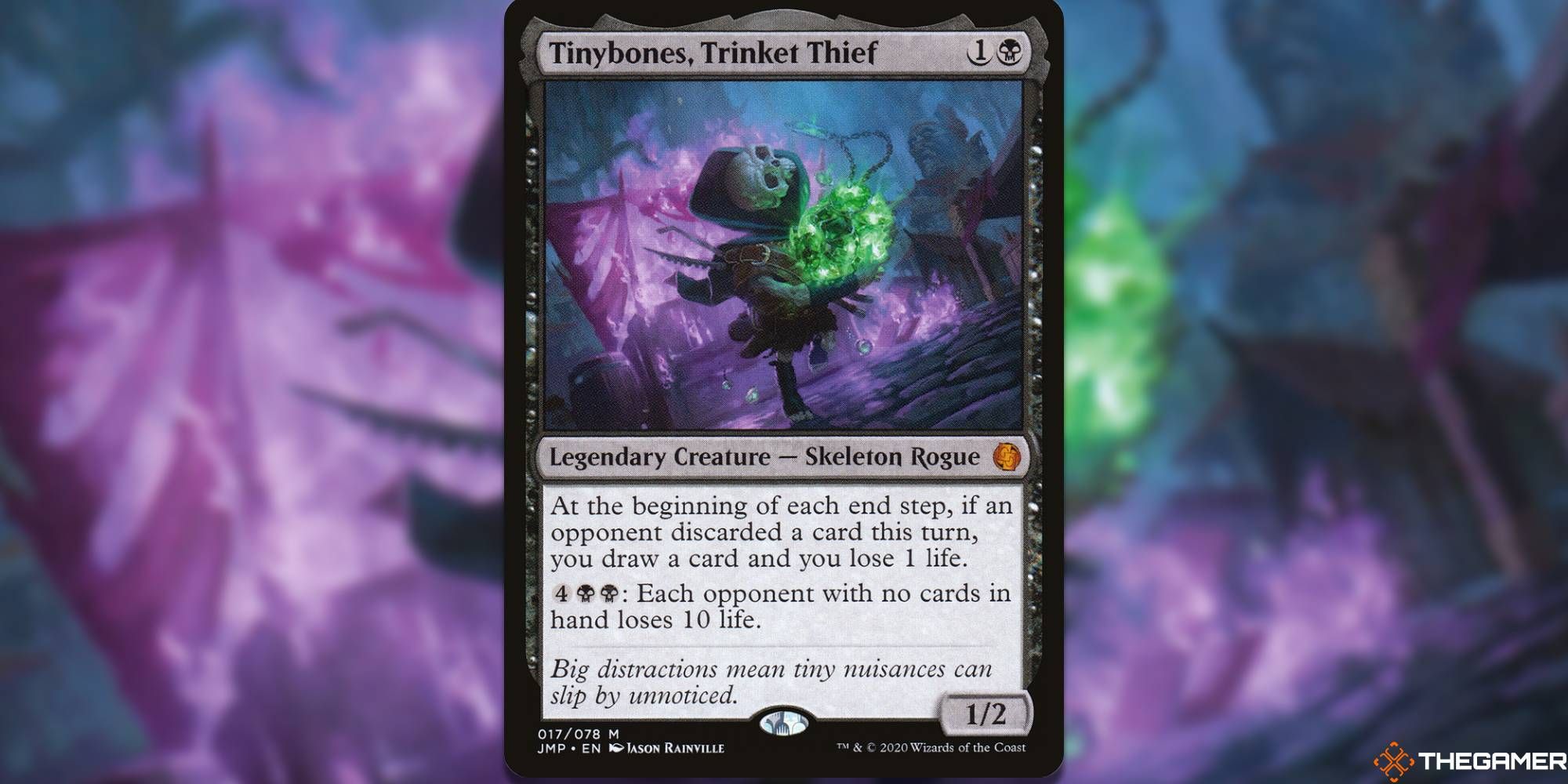 For such a cute name, Tinybones is truly a terrifying commander. A card whose ability is based on opponents having no cards in their hand is certainly not going to make many friends around the table. But it can definitely win you games.

Tinybones decks are focused on forcing your opponent's to continually discard their hand using cards like Duress and The Haunt of Hightower. On one hand, this keeps your opponent's options for targeting you to a minimum. But the real goal is activating his second ability, making each opponent with no cards in their hand lose ten life. This ability becomes very powerful in the late game once you've built up an unstoppable cycle of discarding. 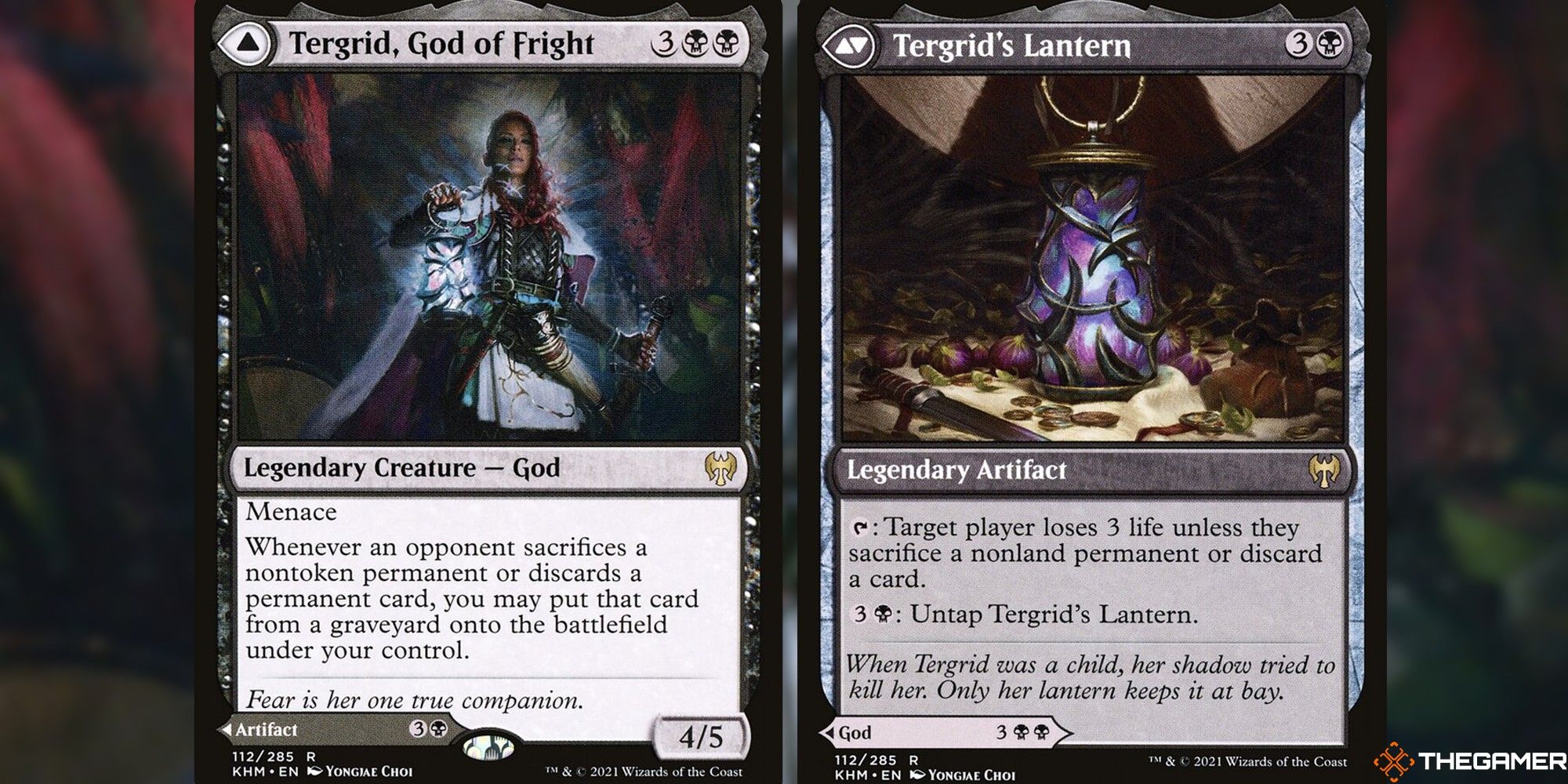 Dual-sided commanders are always fun as they offer a lot of versatility based on the flow of the game. In Tergrid's case, they're fun to play with, not against. Whenever an opponent discards a permanent or sacrifices a non-token permanent, Tergrid allows you to return that card to the battlefield under your control. So cards like Rankle, Master of Pranks can potentially get you six new permanents in a four player brawl game!

You can choose to take this deck in either a sacrifice or discard direction depending on your preference; each are equally powerful. Alternatively you can also case, Tergrid’s Lantern is a legendary artifact that if you tap, makes your opponent lose three life unless they sacrifice a permanent or discard a card. 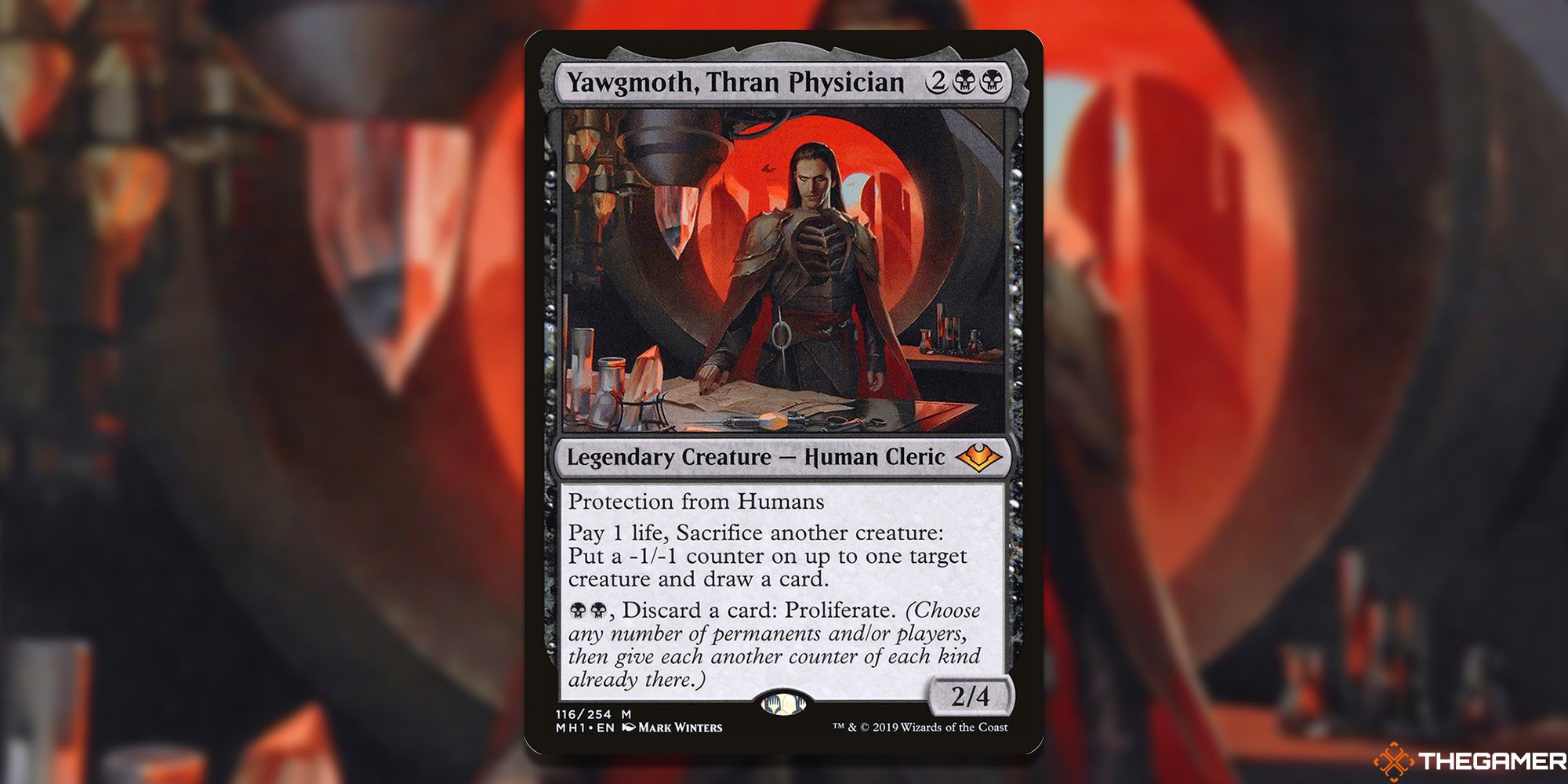 Yawgmoth, Thran Physician will likely make it to most top ten lists when black cards are involved. It does a little bit of everything that black does best. By sacrificing a creature and paying one life, you can put a -1/-1 counter on a target creature and draw a card. Yawgmoth is a combo heavy deck, so this build will take some time to learn all the combinations you can pull off.

Yawgmoth’s second ability lets you multiply the -1/-1 counters on your opponent's creatures to slowly drain their power and toughness. This deck works in a cycle of sacrificing, drawing and discarding to find the most powerful cards in your deck while simultaneously weakening and often destroying your opponents' creatures. 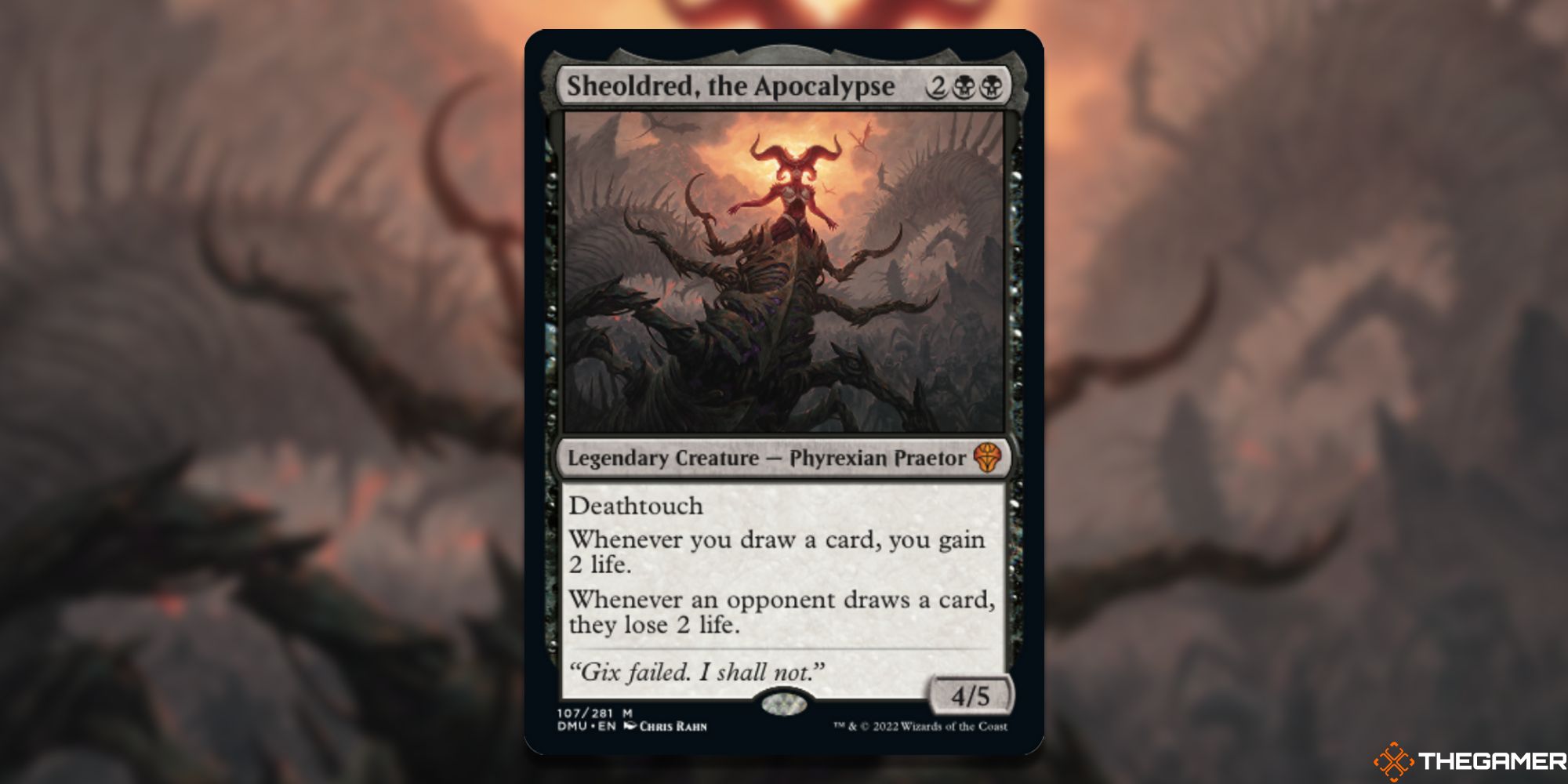 Any of the Praetor cards are strong commander options but Sheoldred is in contention for the strongest of them all. Whenever you draw a card Sheoldred lets you gain two life and whenever an opponent draws a card they lose two life. Punishing people for a staple strategy like card draw is just cruel.

Sheoldred’s tactic is simple; force your opponent to draw as many cards as possible to drain their life to zero. Cards like Peer Into the Abyss, which forces a target player to draw half the cards in their library, are basically an instant win. 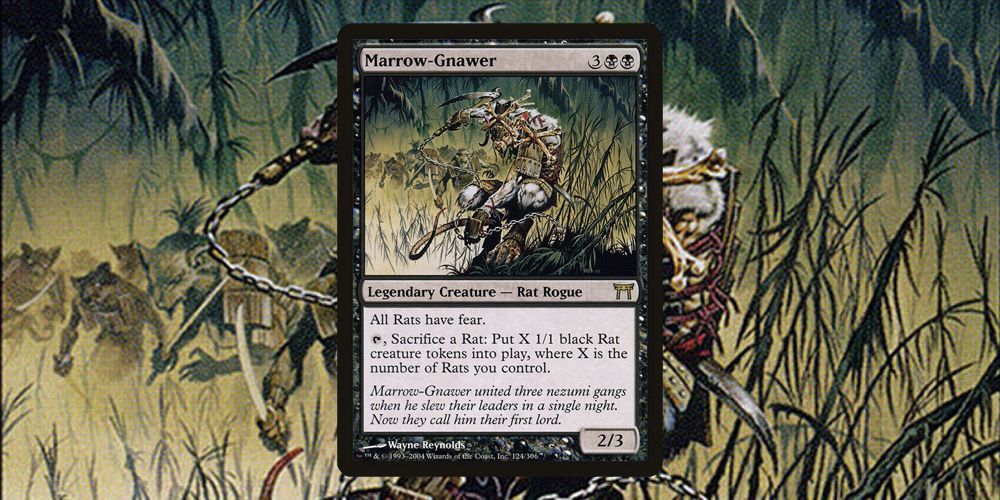 Even the Pied Piper would be no use against a rat this powerful. You can tap Marrow-Gnawer to sacrifice a rat and create X 1/1 black rat tokens, where X is the number of rats you control. It’s an incredibly simple and overwhelmingly powerful ability. You can also just stack the deck full of as many copies of Rat Colony as you want for some high-power attackers.

A swarm of rats is hard enough to deal with, but Marrow-Gnawer also gives all rats fear. So unless you’re running a black or artifact deck or a huge amount of removal, good luck being able to deal with the ever-growing horde of rats. Just find your favourite rats, slap them in a deck with Marrow-Gnawer at the helm and let the fun ensue.