We're five weeks into our look at the Commanders of Magic the Gathering's Innistrad: Crimson Vow now, and so it's probably finally time we actually look at the wedding at the heart of the set, right?

Olivia Voldaren is the matriarch of the Voldaren bloodline, some of the most powerful and ruthless vampires on the plane. Tucked away in her isolated castles in the Stensia region, Olivia wants one thing and one thing only: power. The eternal night that has befallen Innistrad is the perfect mix of chaos and vampiric empowerment needed for her to make her claim. All she needs to do is kidnap Innistrad's most eligible bachelor, the first vampire himself, Edgar Markov.

This week, we're hosting a vampire party with some of the biggest names in Magic's bloodsucking history. Only the best of the best are invited to the wedding of Olivia, Crimson Bride. 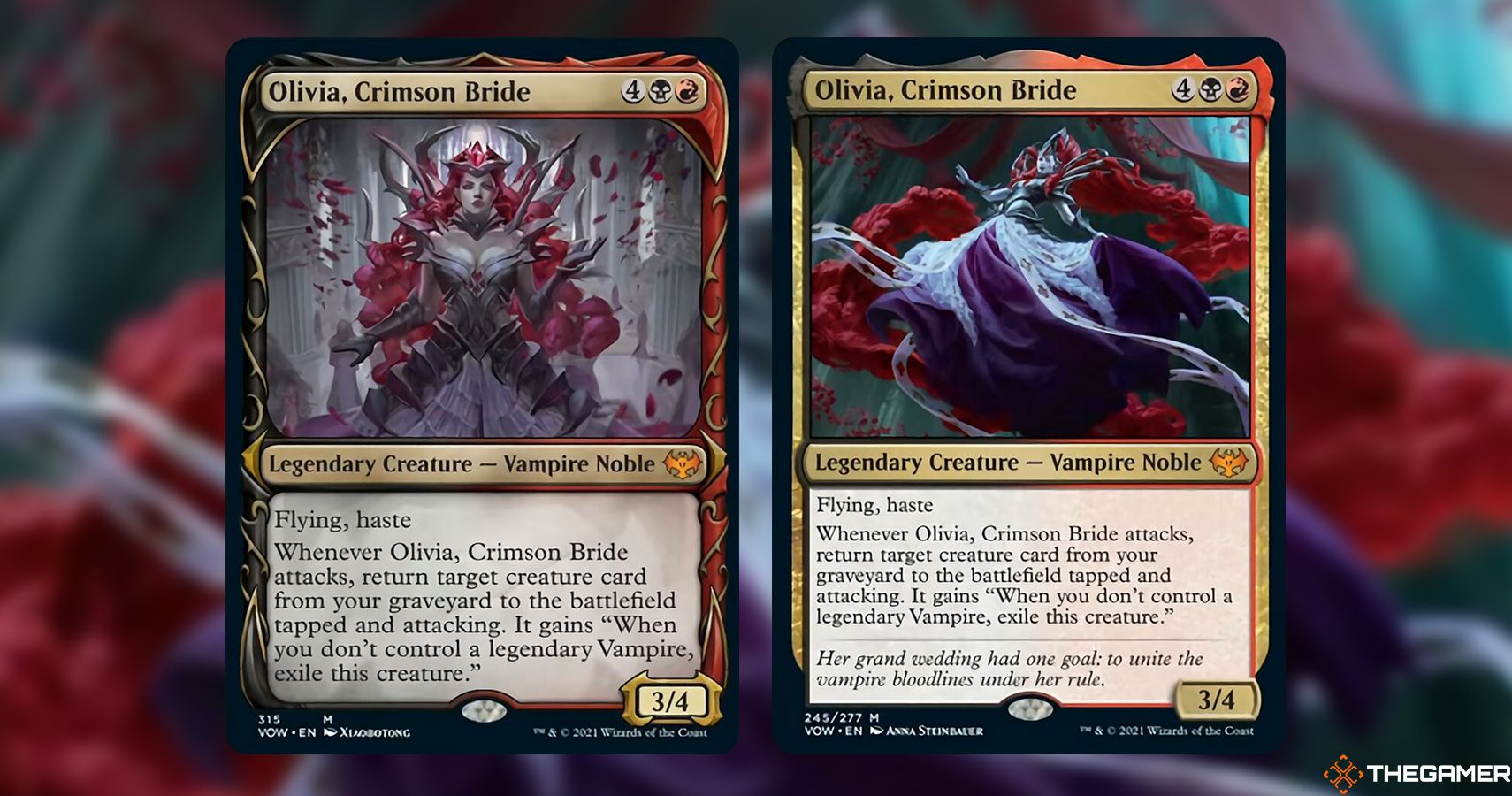 Olivia, Crimson Bride is a 3/4 vampire Noble that costs four generic, one black, and one red. She has flying and haste, and, whenever she attacks, you return a creature from your graveyard to the battlefield tapped and attacking. The catch is that creature relies on there being at least one legendary vampire under your control; otherwise, it exiles itself.

Graveyard reanimation that relies on a Vampiric patron to keep going? We can make this work. 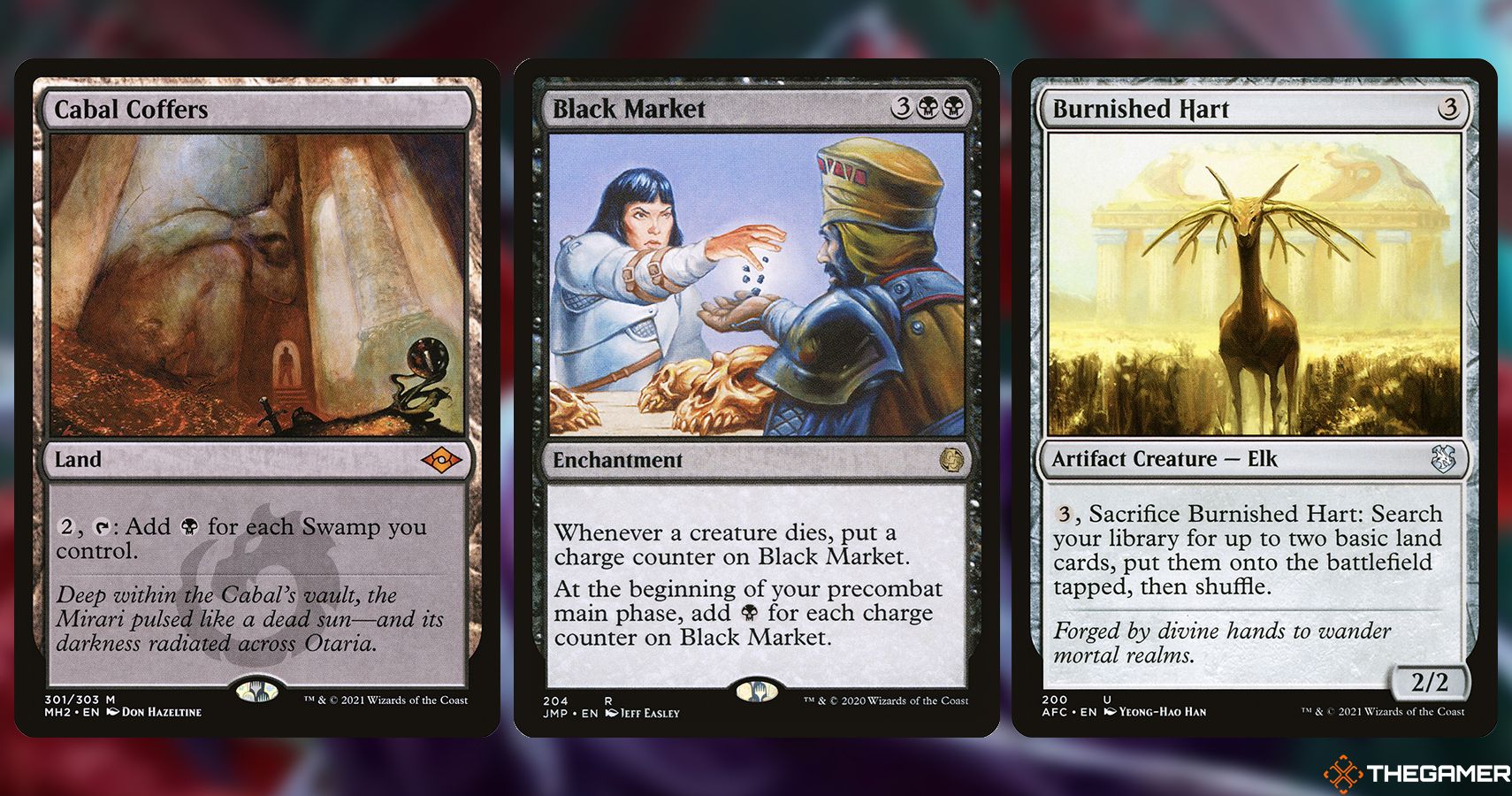 Ramp isn't exactly Rakdos' strong suit, with both black and red preferring more immediate bursts of mana over steady, long-term land advantage. So after the usual mana rocks of Sol Ring, Arcane Signet, and the new Innistrad staple Moonsilver Key, we have to get a bit more creative with handling ramp.

Burnished Hart appears in many decks, but is particularly useful with Olivia, who can just keep bringing it back for as many lands as we need. Other than fetch lands like Bloodstained Mire and Myriad Landscape, and the Moonsilver Key above, this is the only way to cheat out extra lands we have.

Extra mana, though, is easy. Cabal Coffers is a fantastic land that produces black mana equal to the number of Swamps you control. When combined with Urborg, Tomb of Yawgmoth to make all of your lands Swamps, it can create a lot of mana.

Death is only an inconvenience with Olivia, so let's also make use of both Ashnod's Altar and Phyrexian Altar to sacrifice creatures and make mana at the same time. Black Market helps out here too, making more mana the more creatures die when it's on the battlefield. This deck also makes a reasonable number of token creatures to help fuel this, so we may not even have to sacrifice our more esteemed wedding guests. 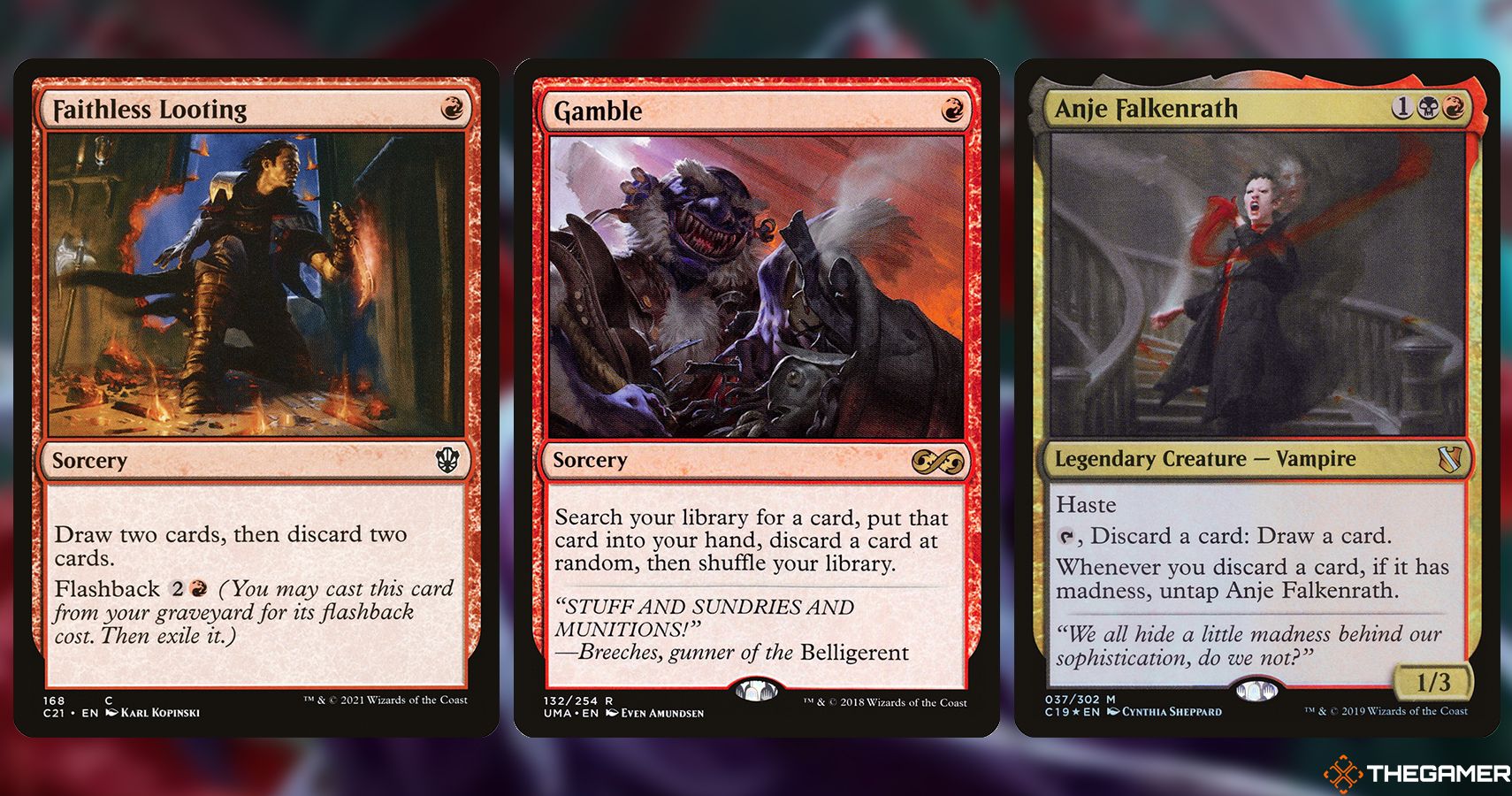 This deck's entire strategy is "dump creatures into the graveyard, bring them out for free with Olivia", and so there are tons of great rummaging and looting effects that give you card draw and discard at the same time.

Faithless Looting, Faithless Salvaging, Cathartic Reunion, Burning Inquiry, Gamble, Thrill of Possibility, and Unexpected Windfall make up the bulk of our card draw setup. Anje Falkenrath is the begrudging maid of honour at the Voldaren Wedding, so using her original card of the same name to discard and draw is also going to be big.

Don't forget that Crimson Vow introduced blood tokens! You can pay one mana, discard a card, tap, and sacrifice the token to draw a card, and there are a few ways of making them in this deck. It isn't a theme in the same way it was in Odric, Blood-Cursed, but using Anje, Maid of Dishonor and Kamber, the Plunderer to make them is a nice added bit of card draw. 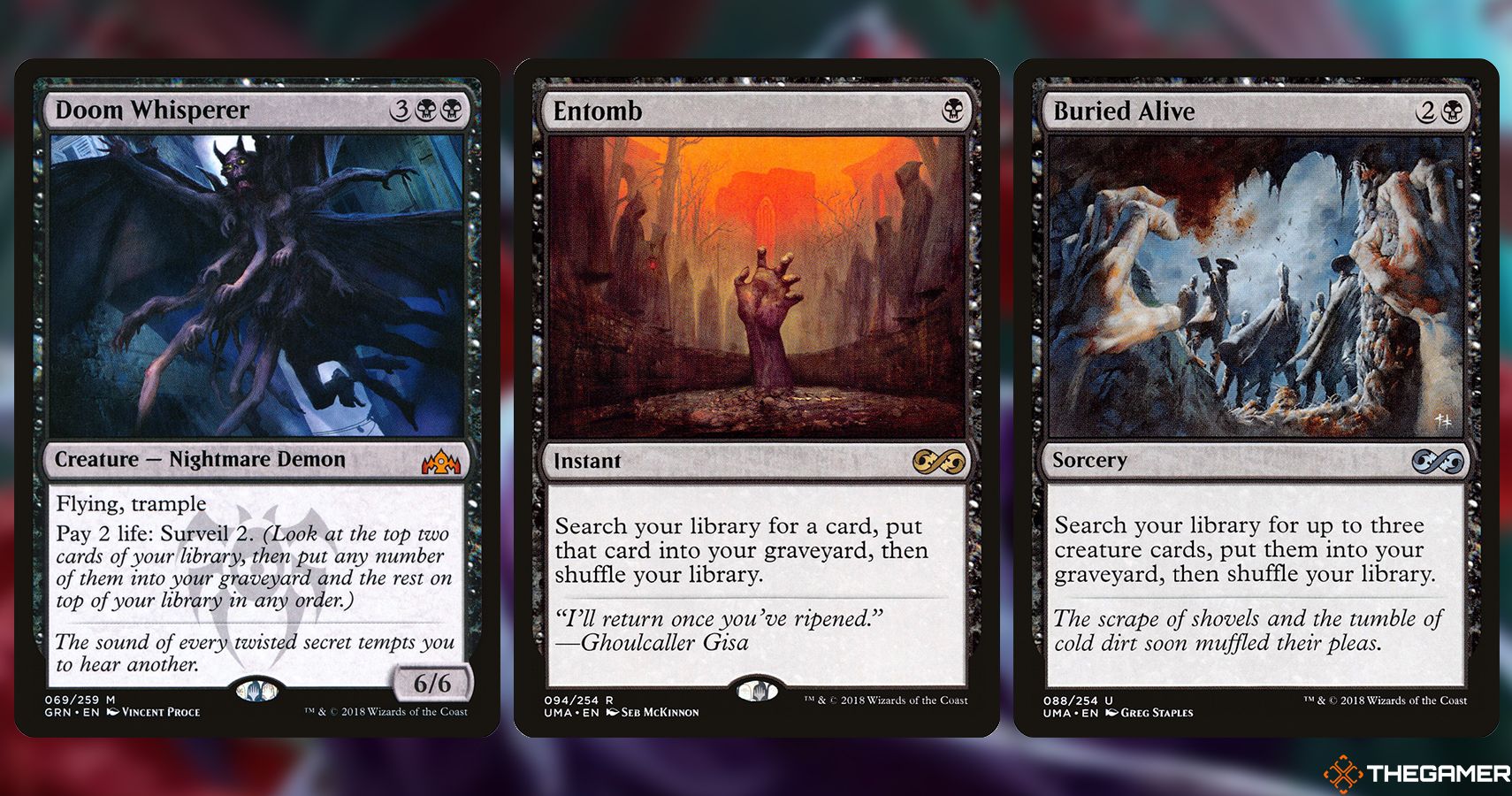 For Olivia to pull our creatures onto the battlefield, we first need to get them into the graveyard. On top of all the rummaging and looting we do to draw cards, there are many ways to skip the middle man and put them there directly.

Lord of the Forsaken allows us to pay one black mana and sacrifice another creature to have a target player mill three cards (the idea being we're our own target), and Doom Whisperer lets you pay two life to surveil the top two cards of your library. Surveiling allows you to look at the top specific number of cards in your library and then either keep them on top or put them into your graveyard. Paying two life may be a downside in other formats, but in Commander, with its starting life total of 40, it's a much less restrictive cost. The last creature we're using for this is Gorging Vulture, a funny common that mills four cards when it enters the battlefield and gives you life back for each creature you put in the graveyard through it.

This deck is using an Isochron Scepter, and for once, it isn't being used as a combo piece. Encode it with Entomb, an instant that costs one mana to find a creature in your library and put it into the graveyard, and you've got a repeatable bit of graveyard filling each turn. 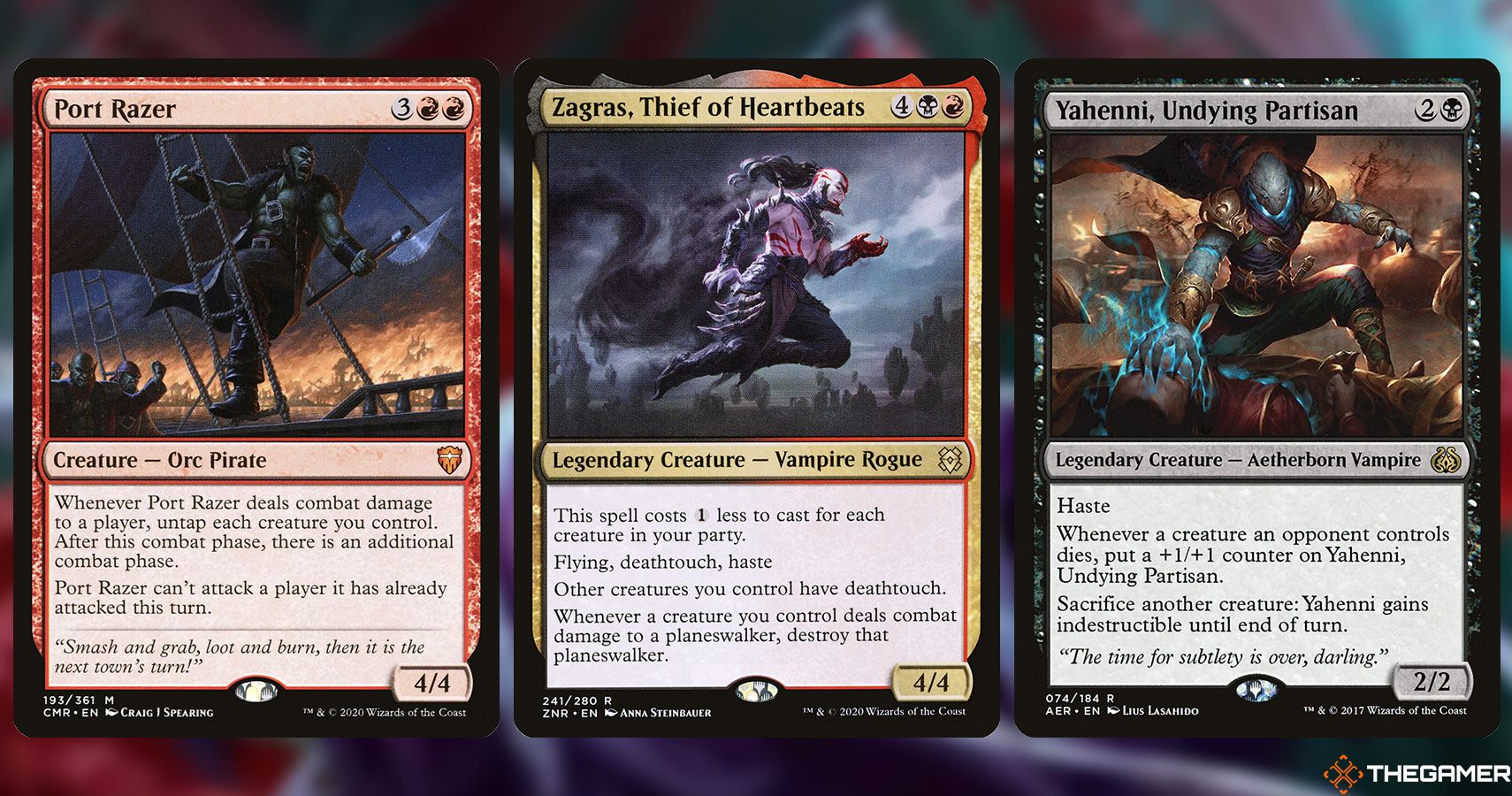 Our guests have been assembled, now it's time to bring them into the fight.

The core of this deck is that we're going to abuse one line of text on Olivia's card to make her much, much more powerful. When Olivia brings back a creature, it gains "when you don't control a legendary vampire, exile this creature". It says "legendary vampire", not Olivia, not another legendary vampire, just a legendary vampire. So if the vast majority of our creatures are legendary vampires… they'll never have to exile themselves. If they die, your vampires will be safe and dead in the graveyard before that rule is checked, ready to be brought back again and again.

First, the most useful legendary vampires in the deck. Vito, Thorn of Dusk Rose is part of a potential win condition, so saving him for when you're ready to take the win is important. Anowon, the Ruin Sage is fabulous and forces each player to sacrifice a non-vampire creature at the start of your turn… unless you control nothing but vampires, in which case it's a powerful asymmetrical forced sacrifice card. Strefan, Maurer Progenitor lets us bring back even more creatures from the graveyard, as long as we have enough blood tokens to keep doing it.

In the mid-tier, we have Yahenni, Undying Partisan, Florian, Voldaren Scion, Timothar, Baron of Bats, Baron Sengir and Sengir, the Dark Baron, and Khalitas, Traitor of Ghet. Khalitas, in particular, is very high in this tier, giving us zombie tokens to sacrifice to other sources and stopping your opponents from doing any recursion nonsense with their creatures.

At the bottom of the pile are Zagras, Thief of Heartbeats and Olivia, Mobilized for War. They're not bad – only the best get invited to the Voldaren wedding, after all – but are much more situational. Zagras gives your other creatures deathtouch which helps Olivia, Crimson Bride attack more, and can be a powerful tool against a potential Planeswalker 'superfriends' deck, but on his own doesn't do much. Olivia, Mobilized for War is another discard outlet to pad out the graveyard, although simultaneously buffing up other creatures is very nice.

While not a vampire and not legendary (let's say it's a thrull servant like Doom Whisperer or Gorging Vulture for thematic purposes…), we'll also be using Port Razer. He may be a ruffian pirate at a decadent vampire wedding, but he gives us multiple combat phases. The more Olivia can attack, the more creatures she can bring out, the faster we can win. 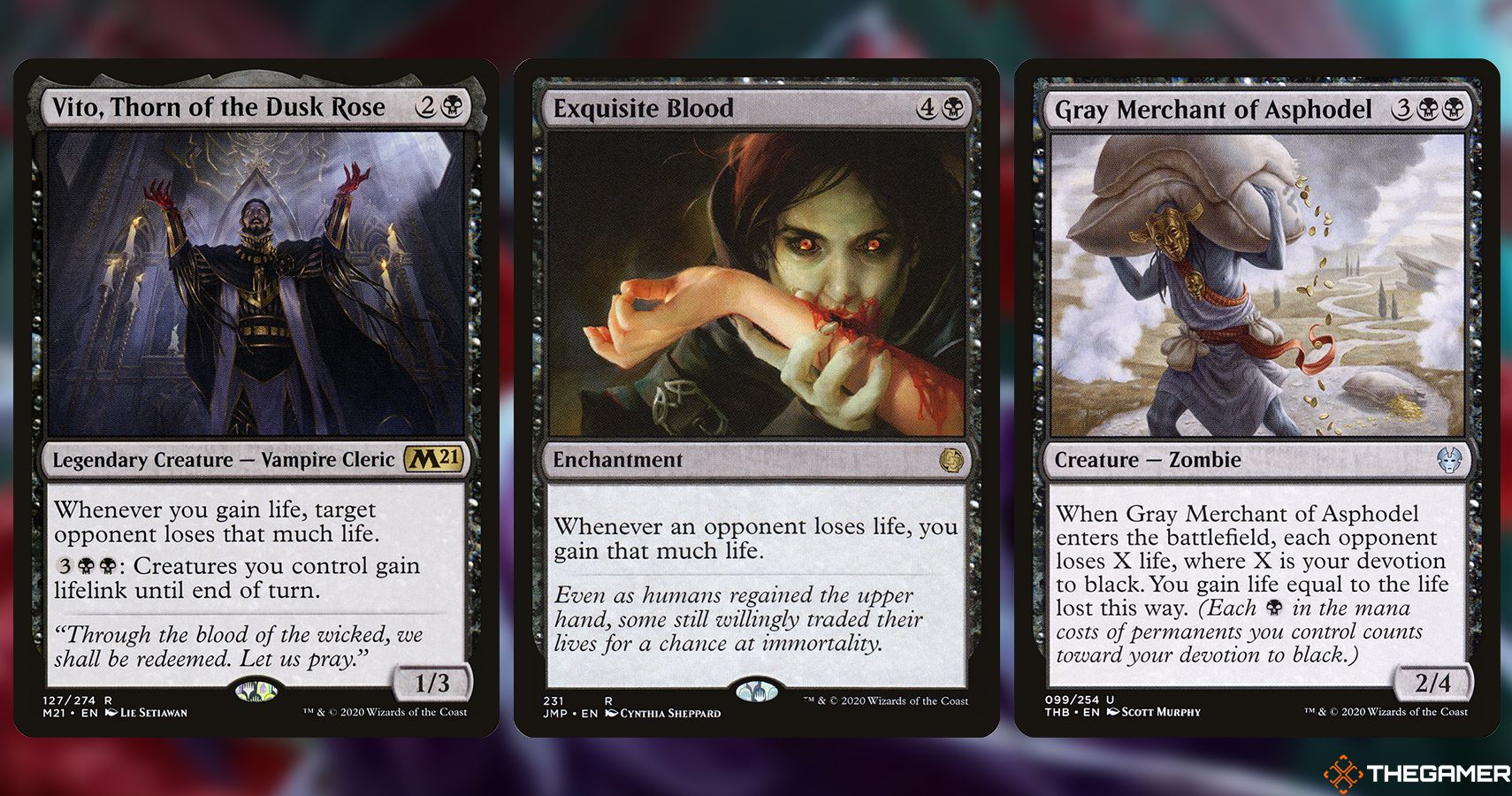 Although this deck is more about being able to say you have a Legendary vampire Tribal deck over being a hyper-efficient powerhouse ready to win at a moment's notice, some cards make this deck terrifying.

First is Exquisite Blood. One of our VIP guests is Vito, Thorn of Dusk Rose, a vampire that causes opponents you lose as much life as you gain. On the other hand, Exquisite Blood is an enchantment that gains you life whenever an opponent loses it. Put the two together, and it's a combo that will loop until every opponent is dead. Consider these your prime targets when casting something like Final Parting.

Another good way to win is through good ol' Gary – also known as Gray Merchant of Asphodel. When Gray Merchant of Asphodel enters the battlefield, your opponents lose life equal to your Devotion to black, and you gain life equal to the total amount lost by all opponents. It may take a few Olivia recursions or using something like Phyrexian Reclamation to puil him out of your graveyard to recast him, but he's going to be a great way to finish off the game.

If those fail, there's always Syr Konrad the Grim. Your opponents take one damage whenever a creature enters your graveyard or leaves it. With so many creatures being sacrificed and brought back with Olivia, those damage triggers are going to build up enough to take out the whole table surprisingly quickly. You may need to do some punching in combat to get all the way to the finish line, but Syr Konrad definitely helps.

Tuning The Deck Down 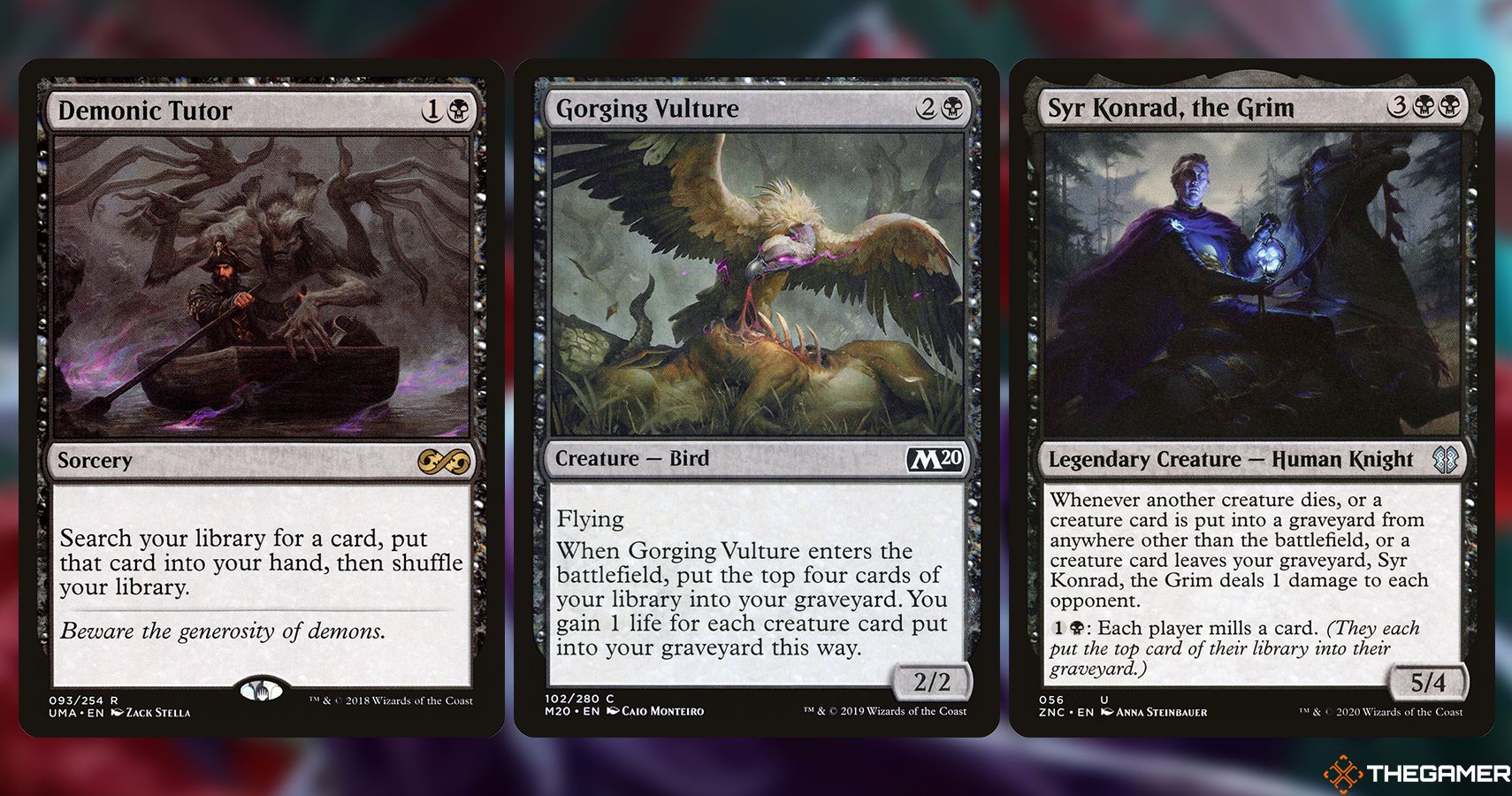 This deck is more about the theme of having a vampire Wedding, so there are a lot of things we could cut for lower-power tables that enjoy 'story'-esque decks like this.

The first and most obvious things to remove are the tutors. Demonic Tutor, Vampiric Tutor, Entomb, and Final Parting all help you find your combo pieces (usually Vito and Exquisite Blood) too quickly and reliably. Forcing on discard, mill, or sacrificed to fill up your graveyard will slow it down a lot.

After that, Exquisite Blood is the next easy pull. Vito can be dangerous without being an infinite combo piece, and he fits the theme as a legendary vampire, so he gets to stay. He just doesn't get to kill the whole table at the same time anymore.

To further slow the deck down, consider trimming the off-theme creatures like Doom Whisperer, Gorging Vulture, Gray Merchant of Asphodel, Syr Konrad, Port Razer, and Burnished Hart. Your legendary vampires are already scary, and relying on them swinging and attacking could be a lot of fun in slower pods.

To see the full decklist for this deck, check out the Moxfield page.