Wizards of the Coast has unveiled this month’s collection of Magic: The Gathering Secret Lair drops, and there is a shocking amount of spice to be found in them.

Like all Secret Lair sales, these limited-time cards will be printed to order after the preorder window has closed. Once the sale has ended, these versions of the cards will never be made available again. While there are fewer drops than usual, thanks to the simultaneous launch of Beadle & Grimm’s Here Be Dragons Secret Lair, the ones we do have include an impressive number of staples available.

Also note that these is running concurrently with the Pride Across The Multiverse drop, which, as of writing, still has almost 17 days remaining. The June Superdrop 2022 ends on July 11, 2022, and can only be preordered through the official Secret Lair website. 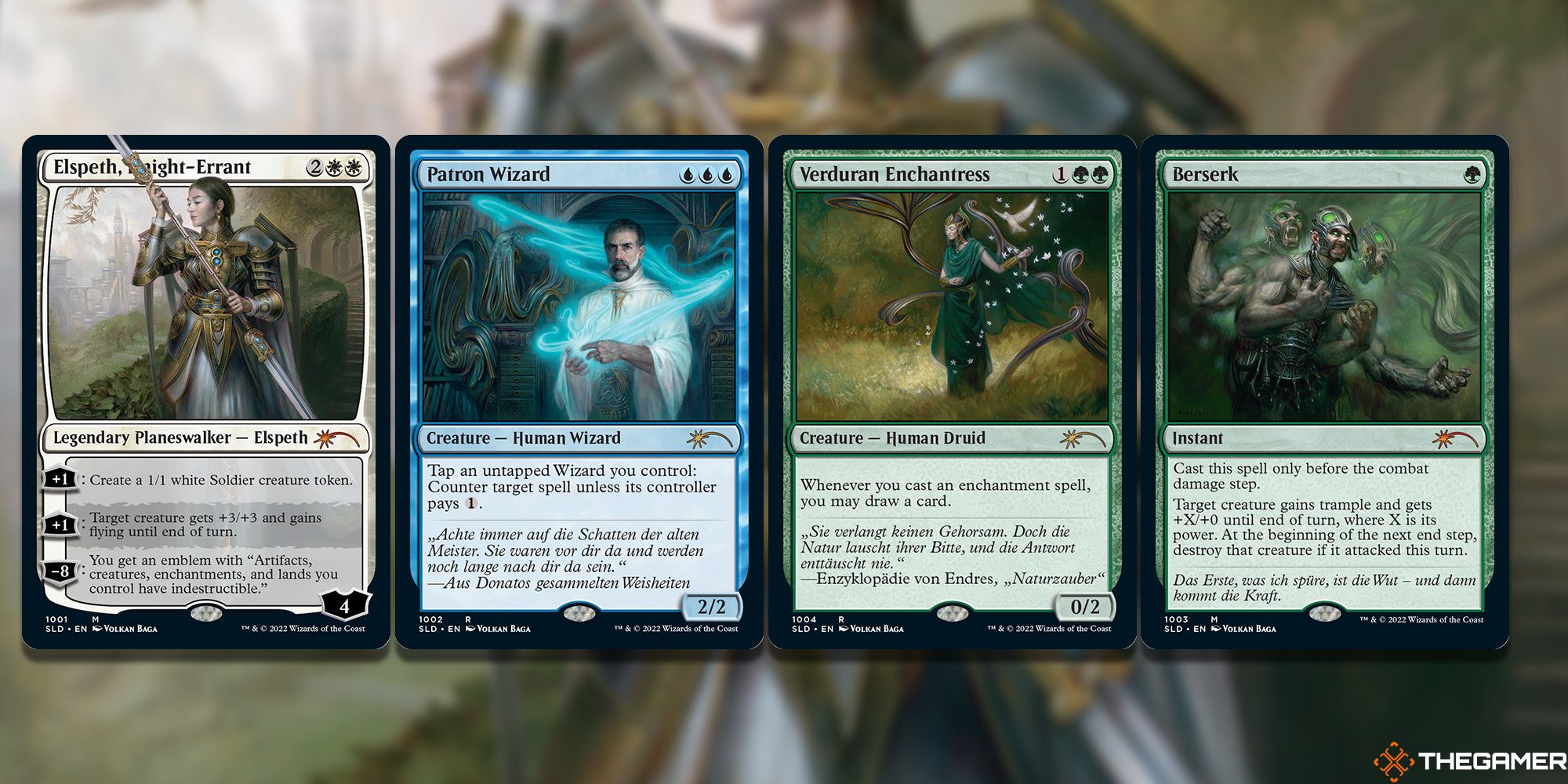 The first of three Artist Series is by Volkan Baga, who has previously done art for popular cards like Panharmonicon, Chromatic Orrery, and Snapcaster Mage.

Like all Artist Series, Baga had input into which cards were included in the drop. Interestingly, this is the first time that an English card has been printed with a non-English flavour text, as three of the four cards include words printed in Baga’s native German. It’s a really nice reference to the artist, although the cards chosen are among the more obscure of the superdrop. 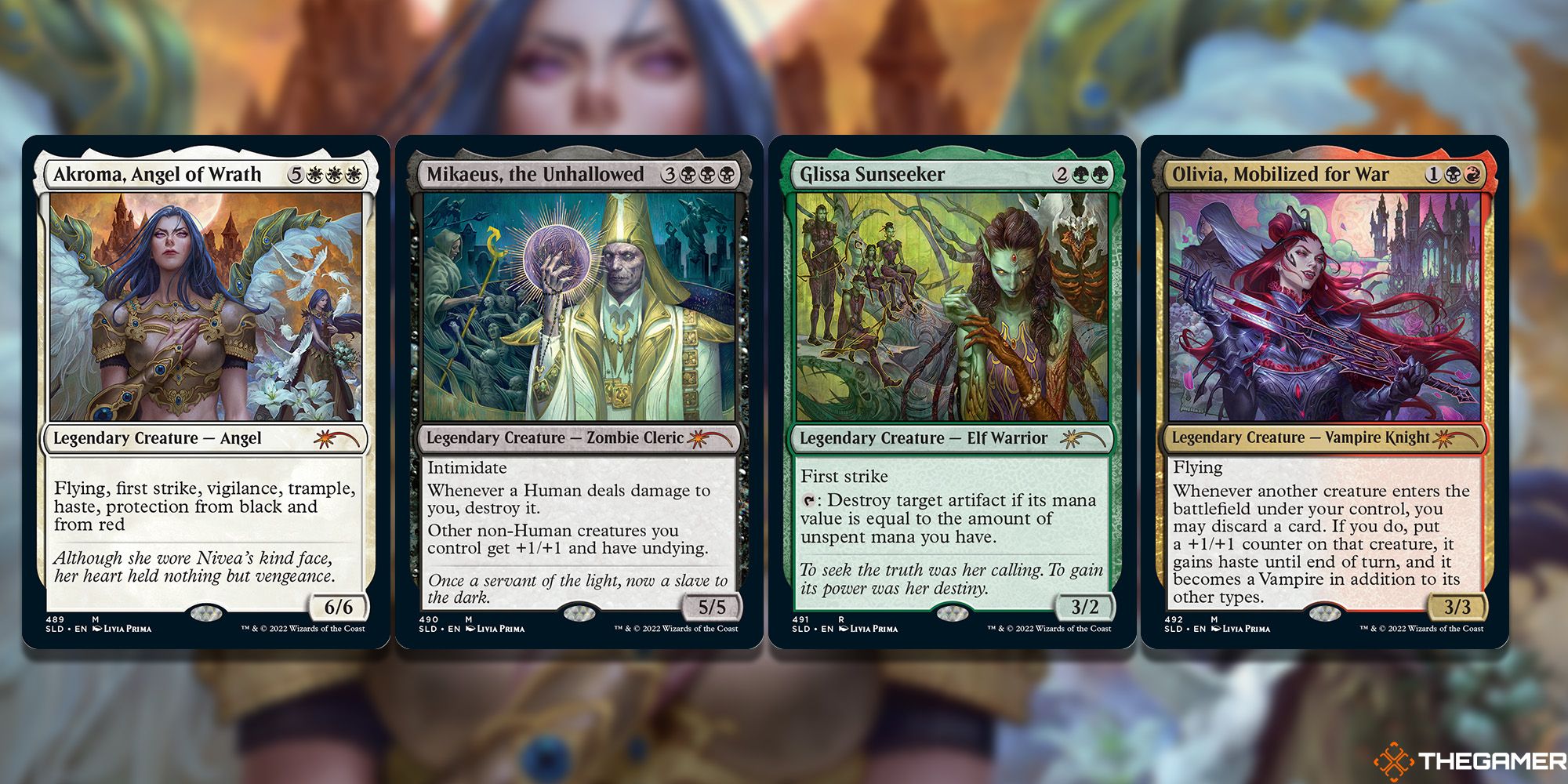 Livia Prima is another prolific Magic artist, who has illustrated cards like Siphon Insight, Blood Operative, Emry, Lurker of the Loch; and Destiny Spinner. Her drop is much more Commander-focused than Volkan Baga’s, giving us four legendary creatures illustrated in her usual, highly-detailed style.

Akroma, Angel of Wrath; Mikaeus, the Unhallowed; Glissa Sunseeker, and Olivia, Mobilized For War all get their own poster-like illustrations putting them front-and-centre in ways we’ve never seen on card art before. As a really nice touch, her husband was brought in to write Akroma’s, Mikaeus’, and Glissa’s flavour text, furthering the inventive text theme of these artist series.

While they’re certainly not in the upper echelons of Commanders, all four of these do see substantial play in Commander. Akroma is fantastic for any kind of keyword-soup deck thanks to her five different keywords, while Mikaeus is a cool non-Human-focused Commander that generally synergises nicely with having lots of Zombies. 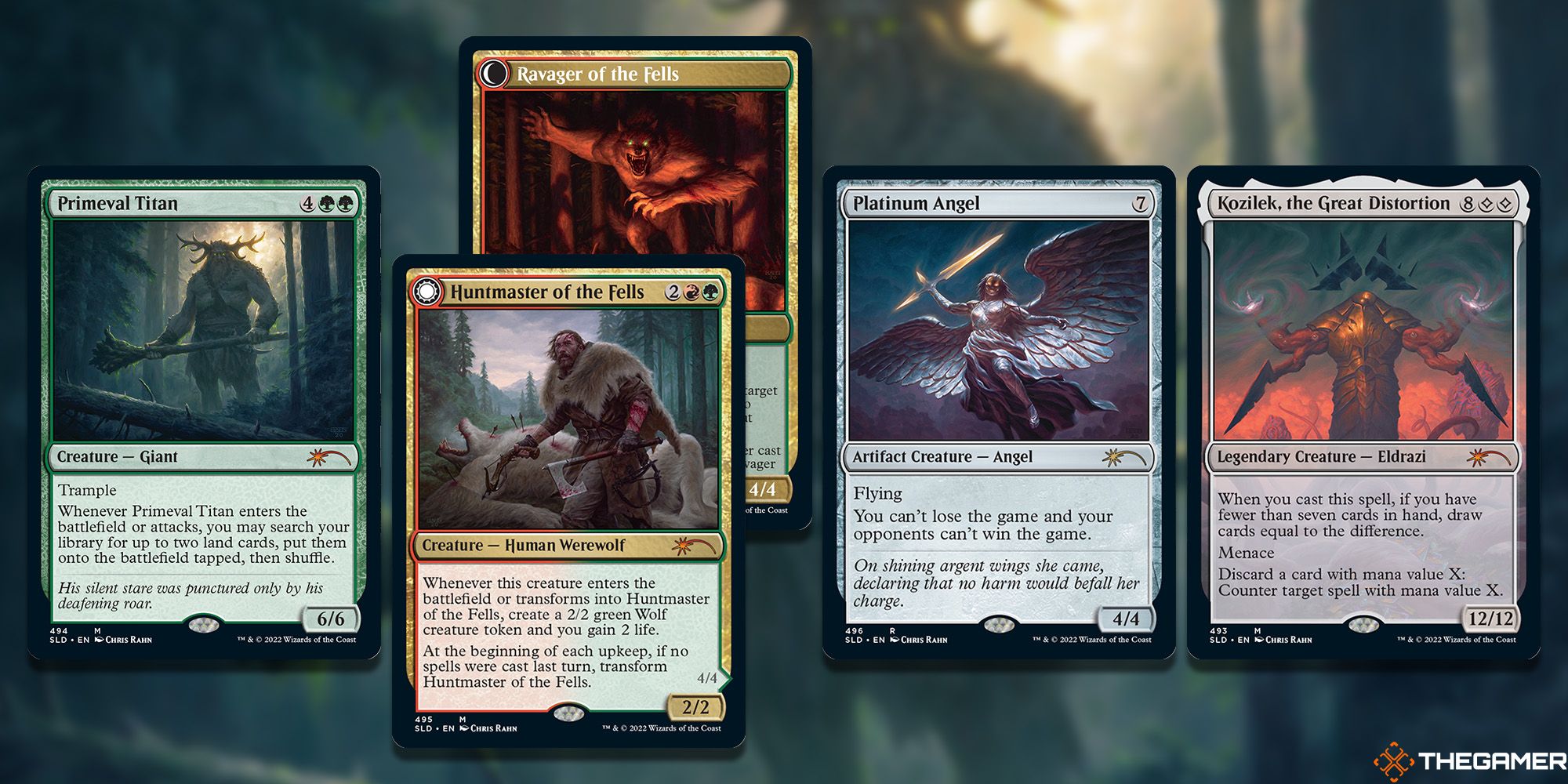 The final Artist Series of this superdrop is Chris Rahn, whose cards Eternal Witness, Craterhoof Behemoth, Cyclonic Rift, and Sword of Feast and Famine all see an incredible amount of play in Commander. Funnily enough, Rahn also illustrated the original art for Mikaeus, the Unhallowed.

This drop is one of the spiciest of the bunch, as it not only features Huntmaster of the Fells, Platinum Angel, and Kozilek, the Great Distortion; but also Primeval Titan, a card banned in Commander due to its power. To make up for that, Huntmaster of the Fells is the only two-sided card in the entire superdrop, as it can transform into Ravager of the Fells in a method very similar to the later-introduced daybound/nightbound mechanic.

The flavour text fun continues here, as Rahn himself wrote the text for Primeval Titan and Platinum Angel. Considering Kozilek’s other card, Butcher of Truth, is coming in Double Masters 2022, this could be a good way to get the foundations of an Eldrazi tribal deck going. 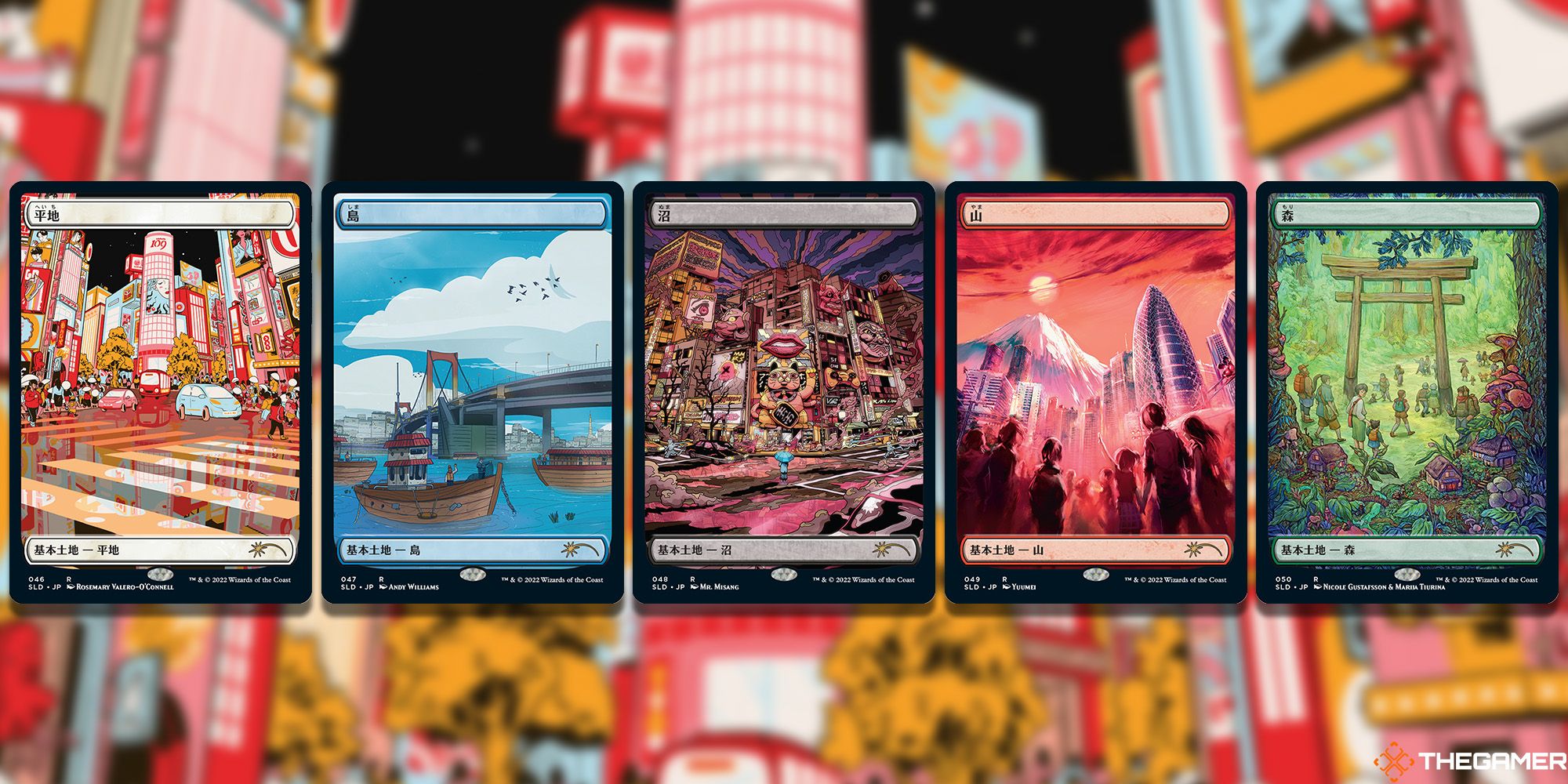 It’s been very hard to justify the numerous basic land Secret Lairs Wizards has been doing. $30 for five basic lands is a monstrously big ask, especially considering players like to use the same art for all of their lands in a deck. That being said, the Tokyo Lands are possibly the most promising one of these offered so far.

It’s still five basic lands, a Plains, Island, Swamp, Mountain, and Forest. It’s still $29.99 for a regular and $39.99 for a foil. But here you get art set in and around Tokyo, with art by Rosemary Valero-O’Connell, Andy Williams, Mr. Misang, Yuumei, and Nicole Gustafsson and Marija Tiurina.

This is the first time we’ve seen explicitly real-world locations on Magic cards, such as Shibuya’s famous 109 store on the Plains, and Mount Fuji on the Mountain. Yet each artist has also given them a distinctly fantastical feel, be it through pop art aesthetics, a grim and imposing blood moon, or fairy houses at a rural shrine. 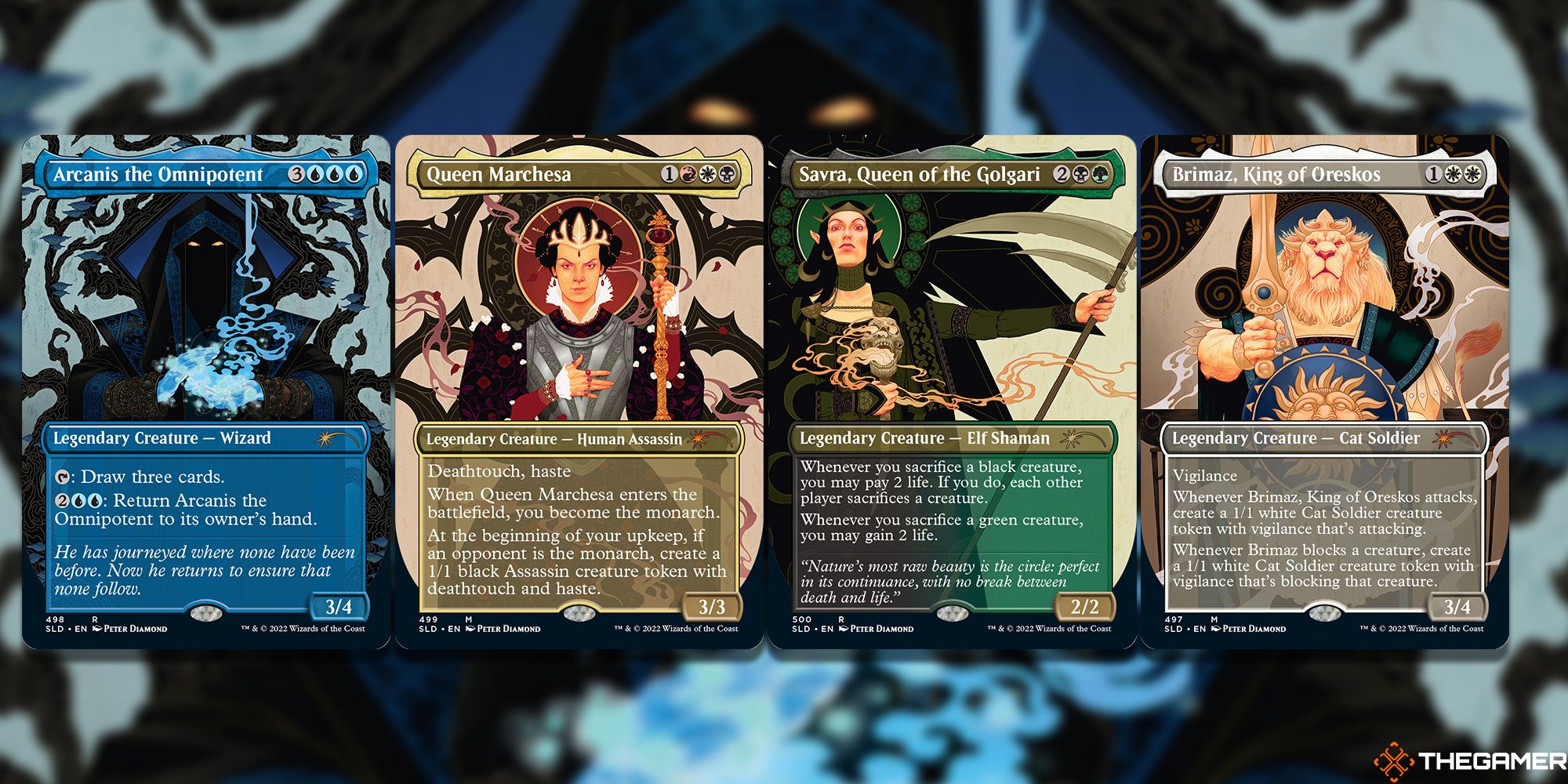 The Platinum Jubilee may have been the week before last, but Magic is now getting royal with this collection of four cards by artist Peter Diamond. Diamond is perhaps best-known for this alternate poster for the animated movie Wolfwalkers; however he’s also made posters for films like The Mummy, Watership Down, and Die Nibelungen.

The four cards in Rule the Room are based on famous monarchs from across Magic. Queen Marchesa; Brimaz, King of Oreskos; Savra, Queen of the Golgari; and Arcanis the Omnipotent all get gorgeously flat new art in Diamond’s style. Though many of these cards don’t see too much play in Commander, Queen Marchesa is one of the go-to monarch (the mechanic) commanders, and Brimaz does have a role in many white token decks. 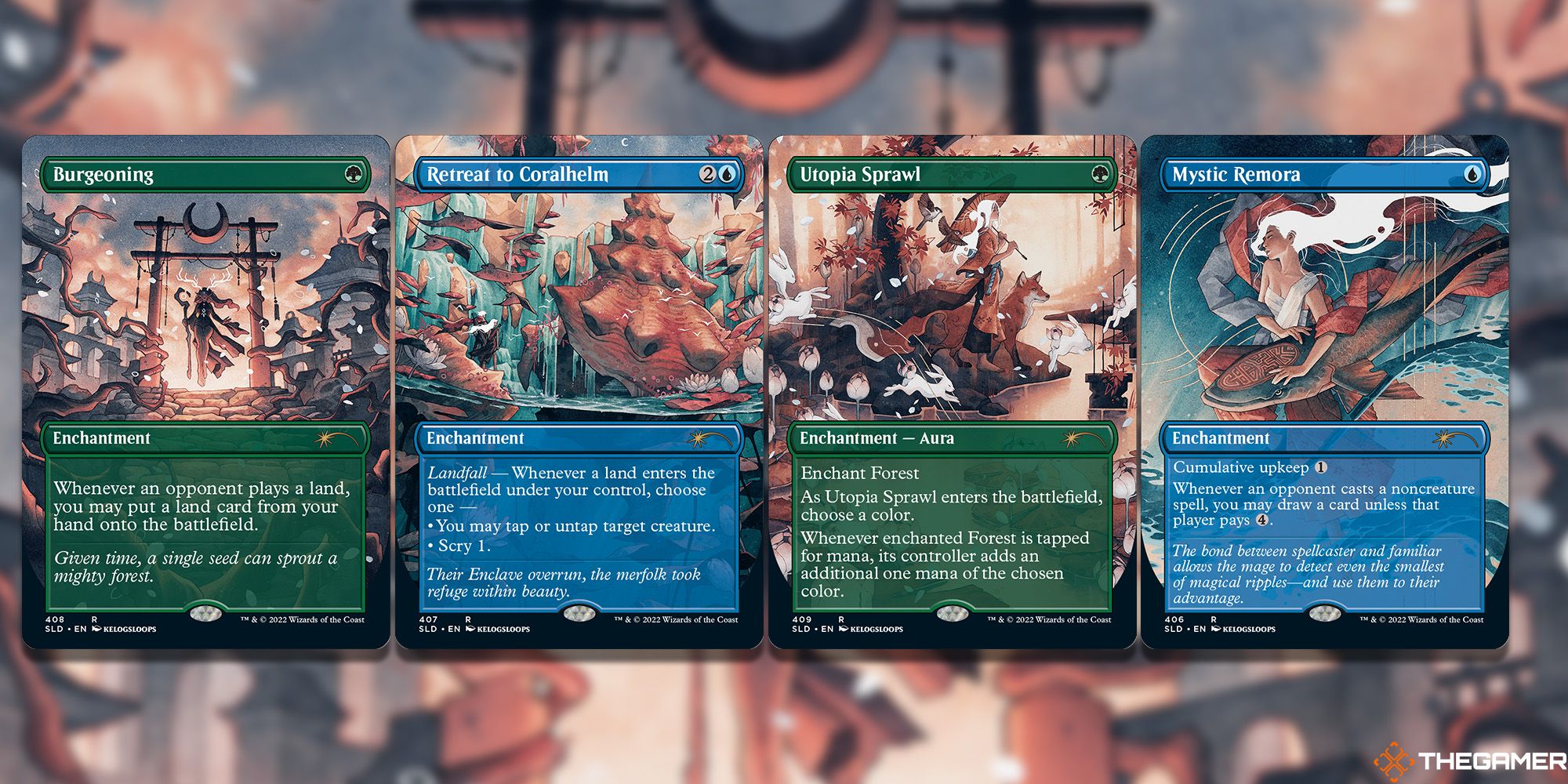 Special Guest drops are kind of like Artist Series, with the key difference being they are artists who have not previously contributed to Magic. This drop features four cards by Kelogsloops, whose watercolour-esque style is noteworthy for its pure white hair and limited colour patterns.

Out of all of the drops, this one probably has the most value for Commander players, as all four of them see significant play in the format. Burgeoning on its own almost costs the same as this drop, and alongside it you get other staples Mystic Remora, Retreat to Coralhelm, and Utopia Sprawl.

It’s wild that this is the first time that Mystic Remora has ever received new art, as it was first printed in 1995’s Ice Age set. Despite not being on the Reserved List, the card’s never had a reprint since then, with its only other appearance being in the MTG Online exclusive Masters Edition. Considering how much of a staple it is in Commander, thanks to its ability to draw cards early on in the game, it’s a shock that this is the first real reprint we’d have ever had for it. 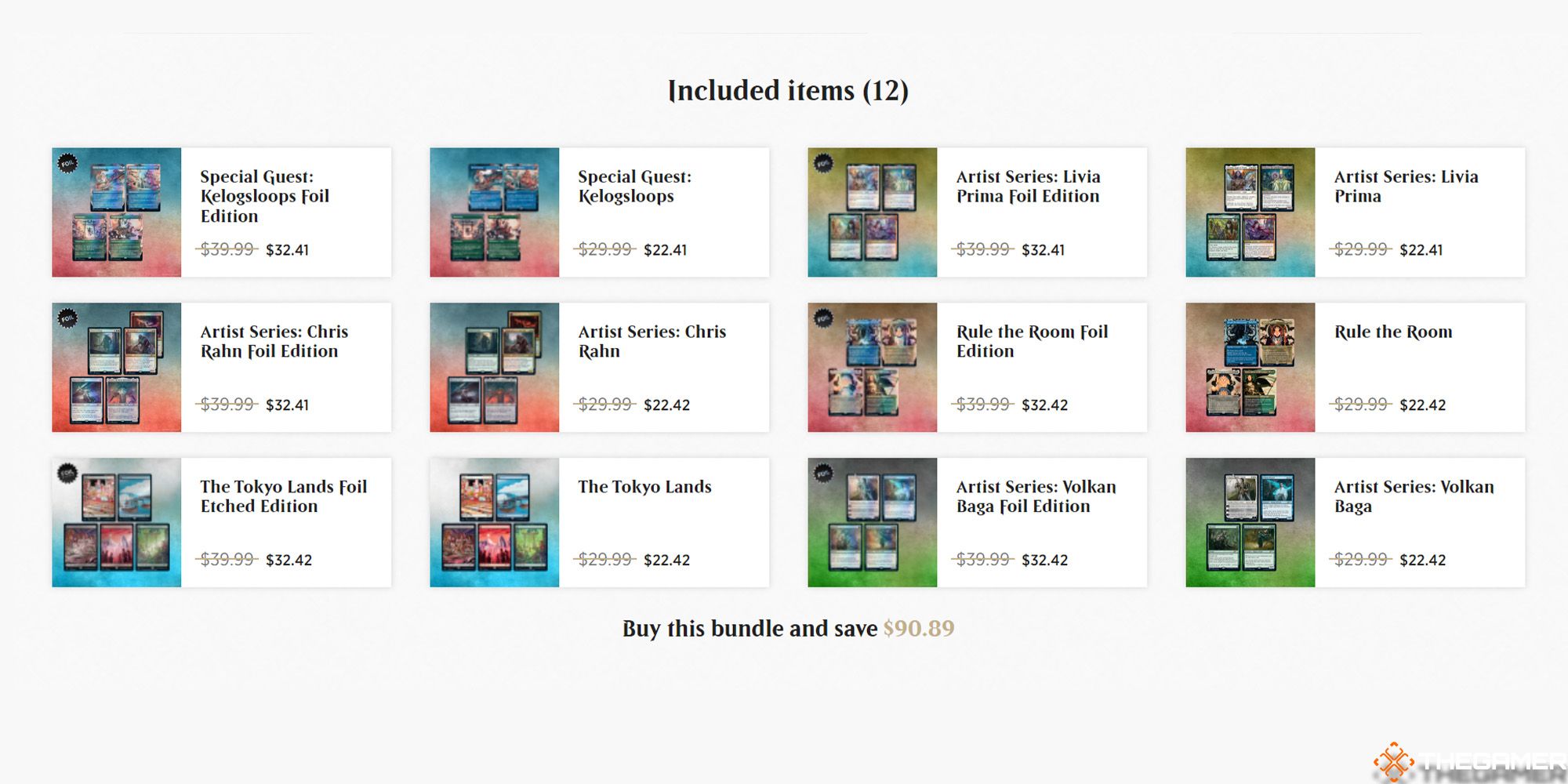 Finally, there are are three bundles: