The Sims 4 game pack Realm of Magic gives players the chance to become a spellcaster and offers different branches of magic to explore. The term Spellcasters is used as a catch-all title for a sim who has abilities that mirror witches, wizards, and fairies from previous Sims titles. So how do you become a Spellcaster and what advantages does it have? We take a look at the how’s and why’s of spellcasting in this handy guide to making magic in The Sims 4.

Any Sim can become a Spellcaster, as long as they are just a regular sim. Vampires, Mermaids, Aliens, Ghosts, and Spellcasters are all separate supernatural life states and a sim can only possess one at a time. This means that any supernatural wishing to use magic will need to renounce any other powers they have first. 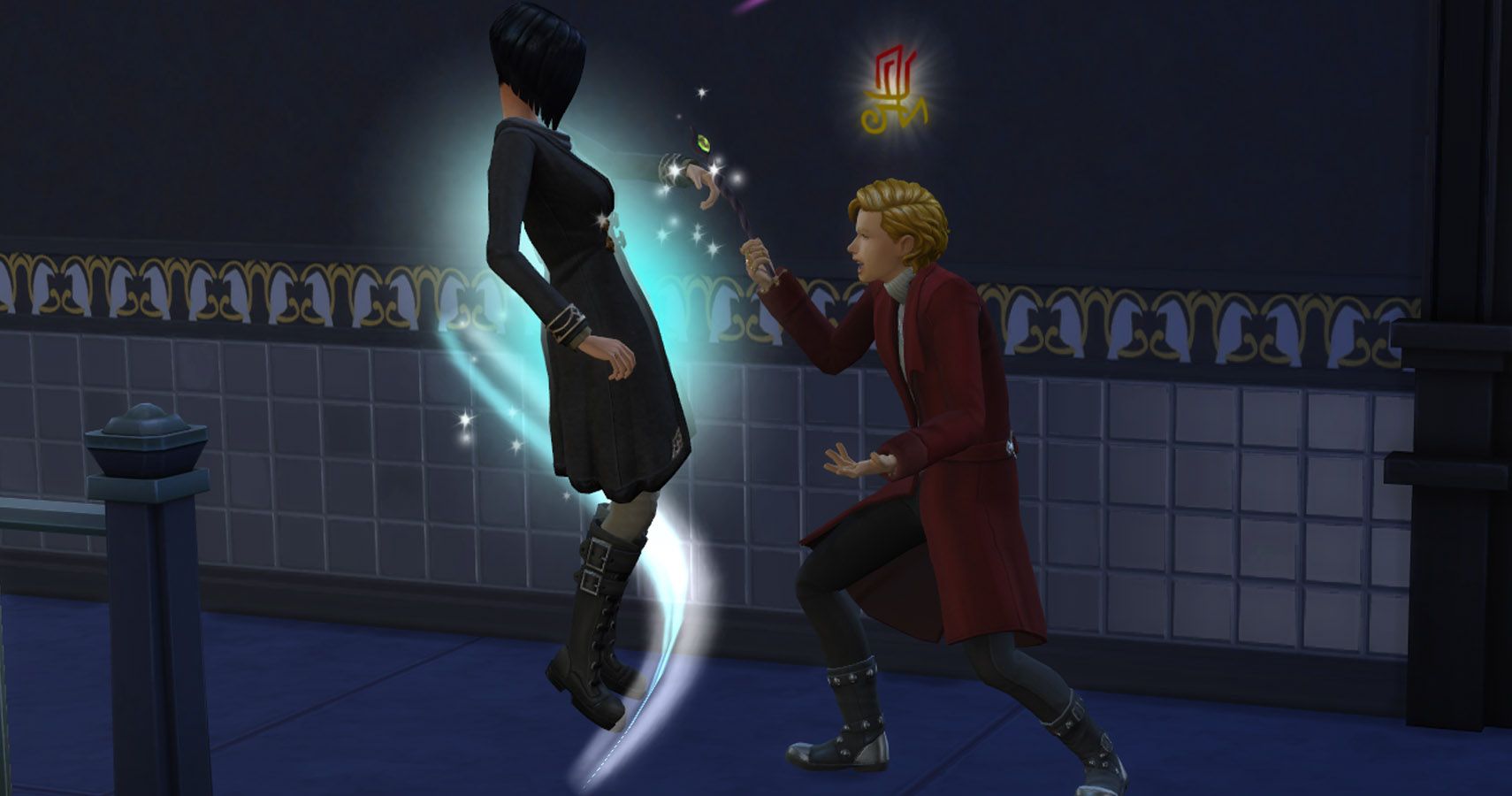 Once your Sim is ready to begin their magical journey they just need to follow the simple steps, beginning with a trip to Glimmerbrook. While this guide will walk you through the process, the aspirations “Spellcraft & Sourcery” and “Purveyor of Potions” will also help guide you on your magical journey.

Glimmerbrook And The Magical Realm

Glimmerbrook is the new town that comes with the pack and it contains three pre-built houses, an empty lot, a bar, and a mysterious glowing portal you can see on the world map. This portal is where you need to go, and you can get there from either the Glimmerbrook Watch empty lot or Rock Ridge Canyon, home to the Charm family. 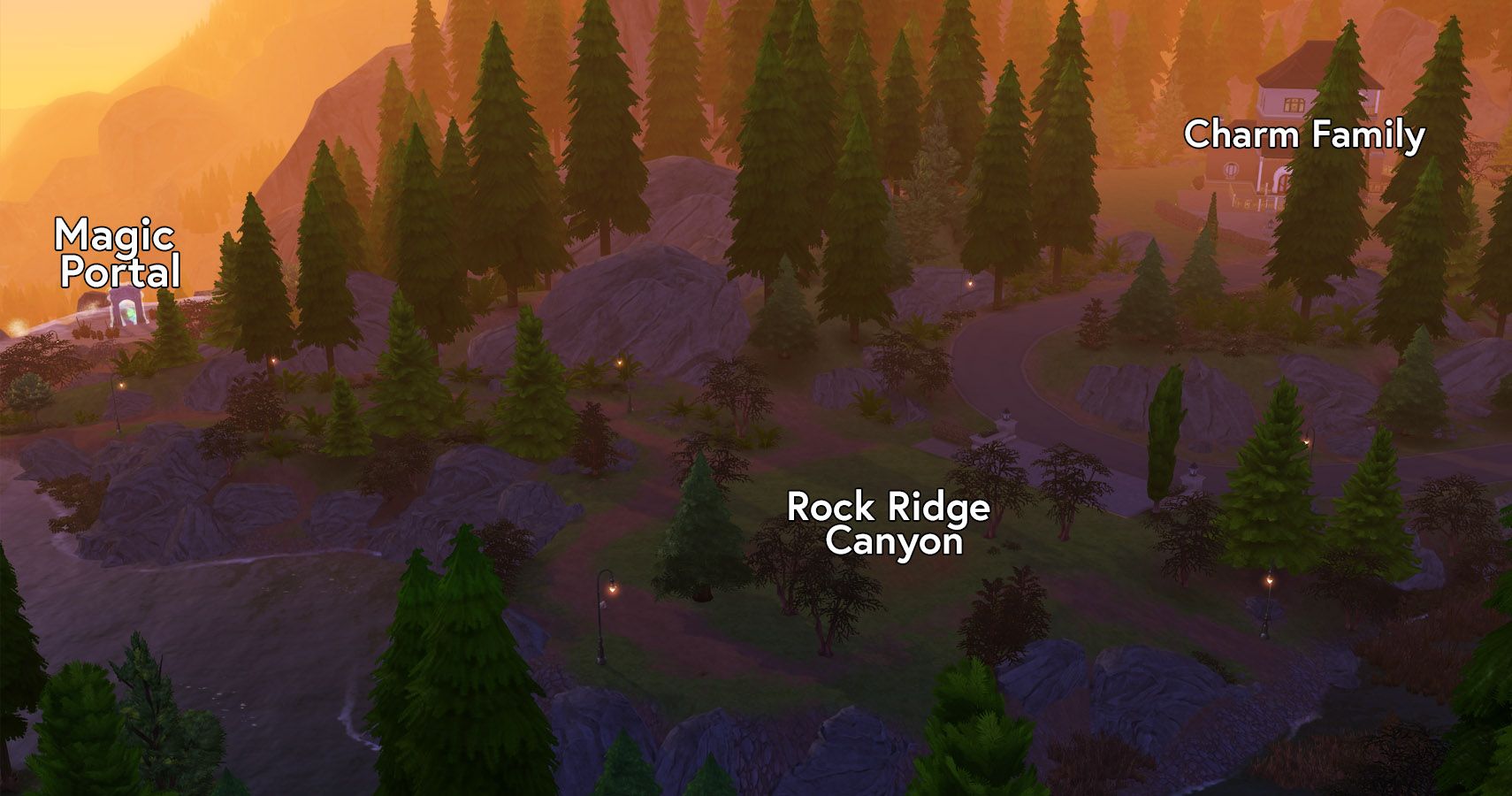 From either lot you can walk towards the portal and follow a dirt path that leads you down to the water. Once you see the portal click the swirling vortex in order to access the “Travel to The Magic Realm” option.

A Trip To Magic HQ

Once you’ve clicked the option to “Enter the Portal” you’ll find yourself in the visually stunning Magic Realm, right outside Magic HQ. Walk straight into the building and keep an eye out for the three sages.

Each sage has a rune above their heads and you may recognize them from the pack’s trailer, although the video offered them all a distinct glow up. L. Faba is the Sage of Mischief Magic, Simeon Silversweater specializes in Practical Magic, and Morgyn Ember Untamed Magic. These three sages are the only sims who can give you spellcasting abilities. 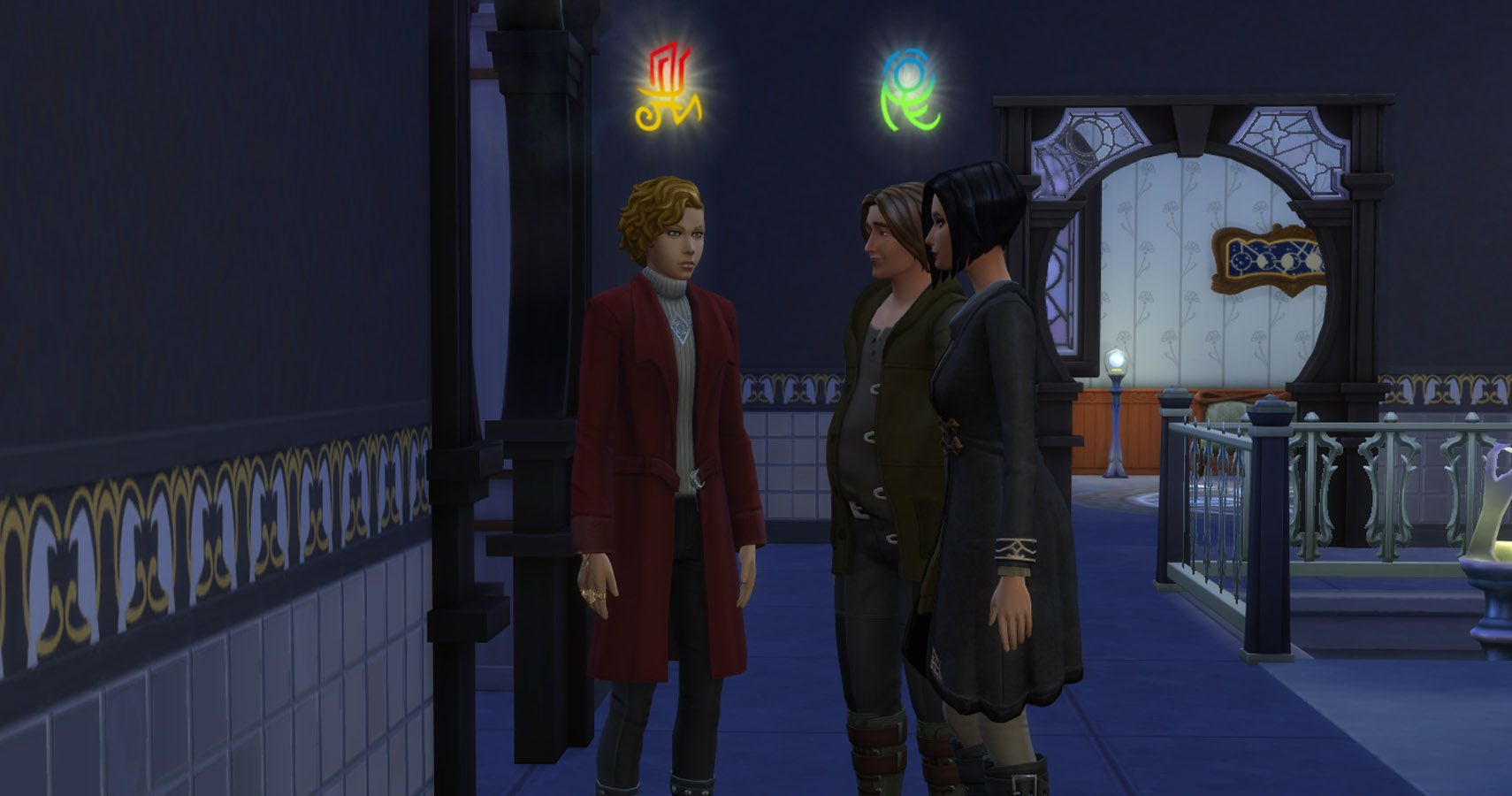 Once you’ve found one of them simply have a chat until you gain the friendly interaction option “Ask How to Use Magic.” Clicking this will activate a pop up that will lead to a timed quest. Despite the fact the timer is long, it’s worth making sure your sims needs aren’t in the red before you start.

The quest is to collect seven Magical Motes from around the area and deliver them back to the Sage. You’ll gain a focused moodlet and a buff called “Mote Sight” that allows you to see the easy to spot purple and pink motes, which are on almost every path on the main island. 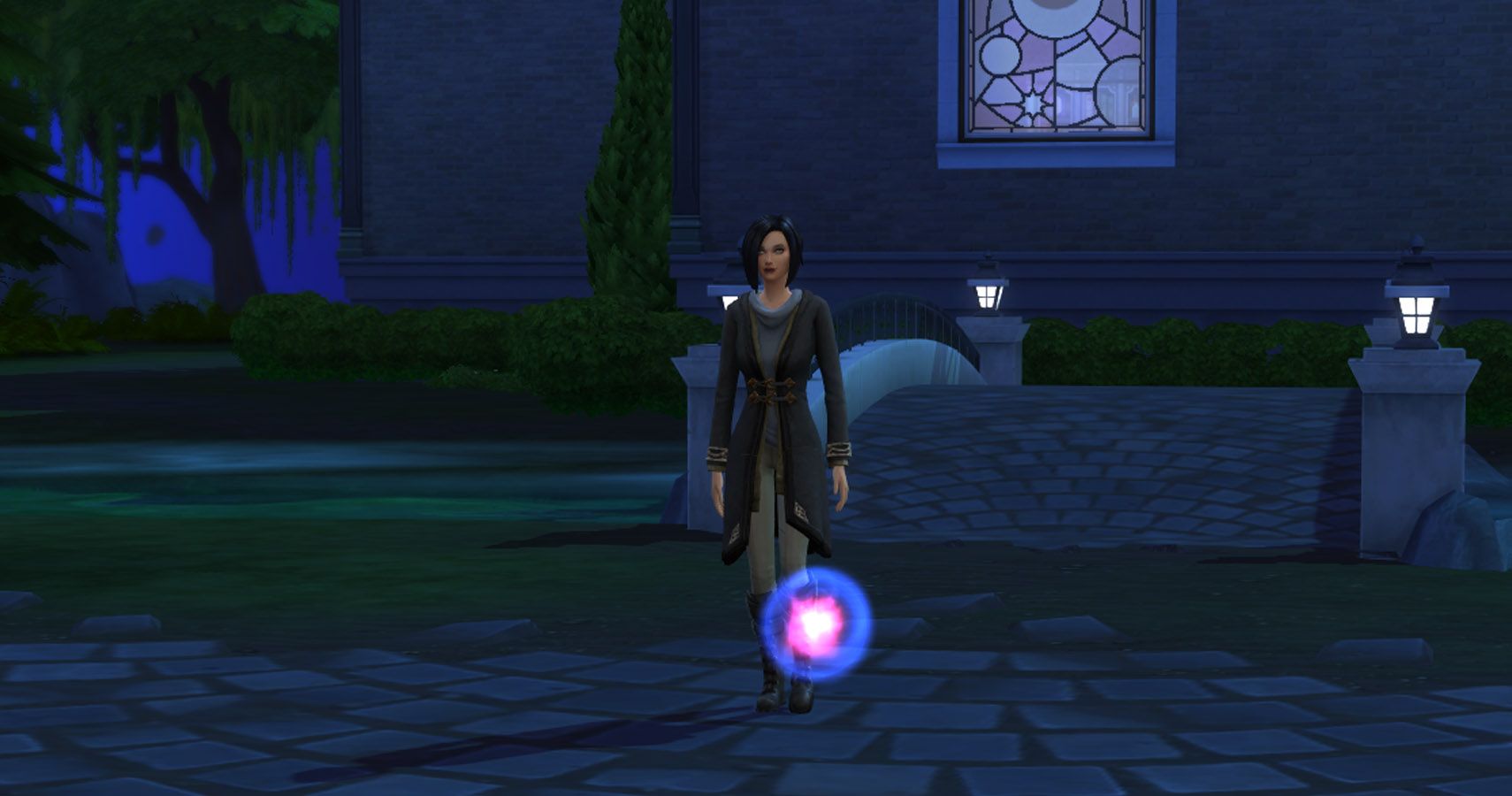 Simply click the motes to collect them and then head back to a Sage to complete the “Turn in Motes” interaction. It doesn’t matter which Sage you turn them in to, as long as you’ve introduced yourself to them to unlock the interaction. However, the Sage selection you make appears to mean you will learn spells in their magical branch first, at least in our experience.

Congratulations, the Sage will now automatically conduct the Rite of Ascension and your sim will be a Spellcaster.

A New Needs Panel And Skills

Your sims needs panel will now include a charge meter (the big blue circle), rank bar, talent points and perks. You’ll also own a Glimmerstone, which allows you to fast travel to the Realm from anywhere in the game. Clicking the book icon on the bottom bar of your needs will bring up the perks and rankings.

As with vampires, there are five ranks of spellcaster. You progress by learning and practicing magic. Talent points will also be unlocked as you earn Spellcaster XP and can be used to gain boosts in different areas. 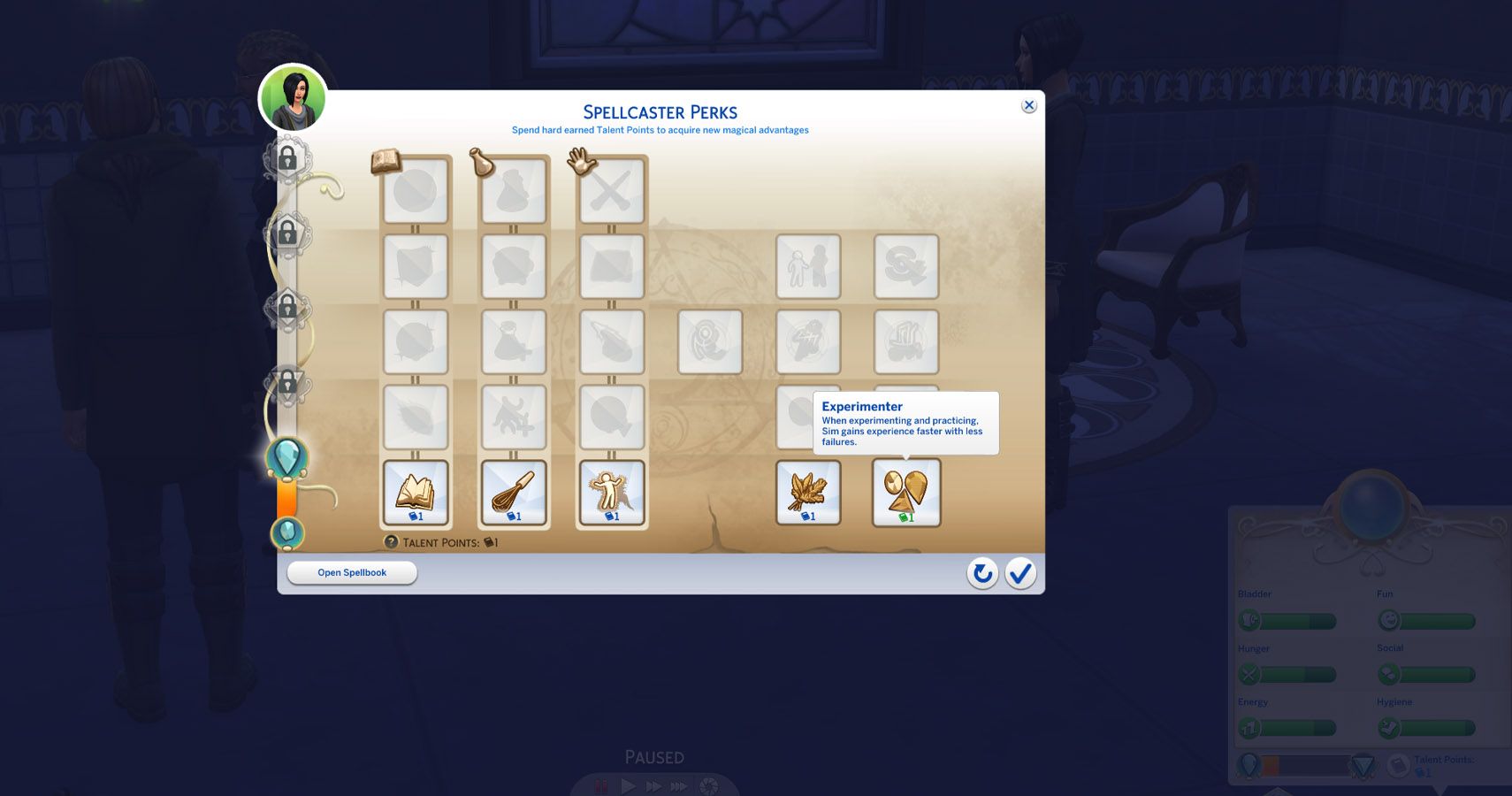 The skills outside these trees are more general and include faster learning, magical XP boosts, and discounts in the Magical Realm’s stores.

You can learn all the spells in every branch of magic, it just takes time. There are several ways of learning but they are all focused around generating spellcaster XP, which gives you talent points, increases your spellcaster level and unlocks spells.

Search bookcases for tomes, that you can read to learn from. You appear to be able to find one tome per spellcaster level. You can also click your sim and choose to practice magic to unlock spells or click a cauldron and hit experiment to learn a potion. 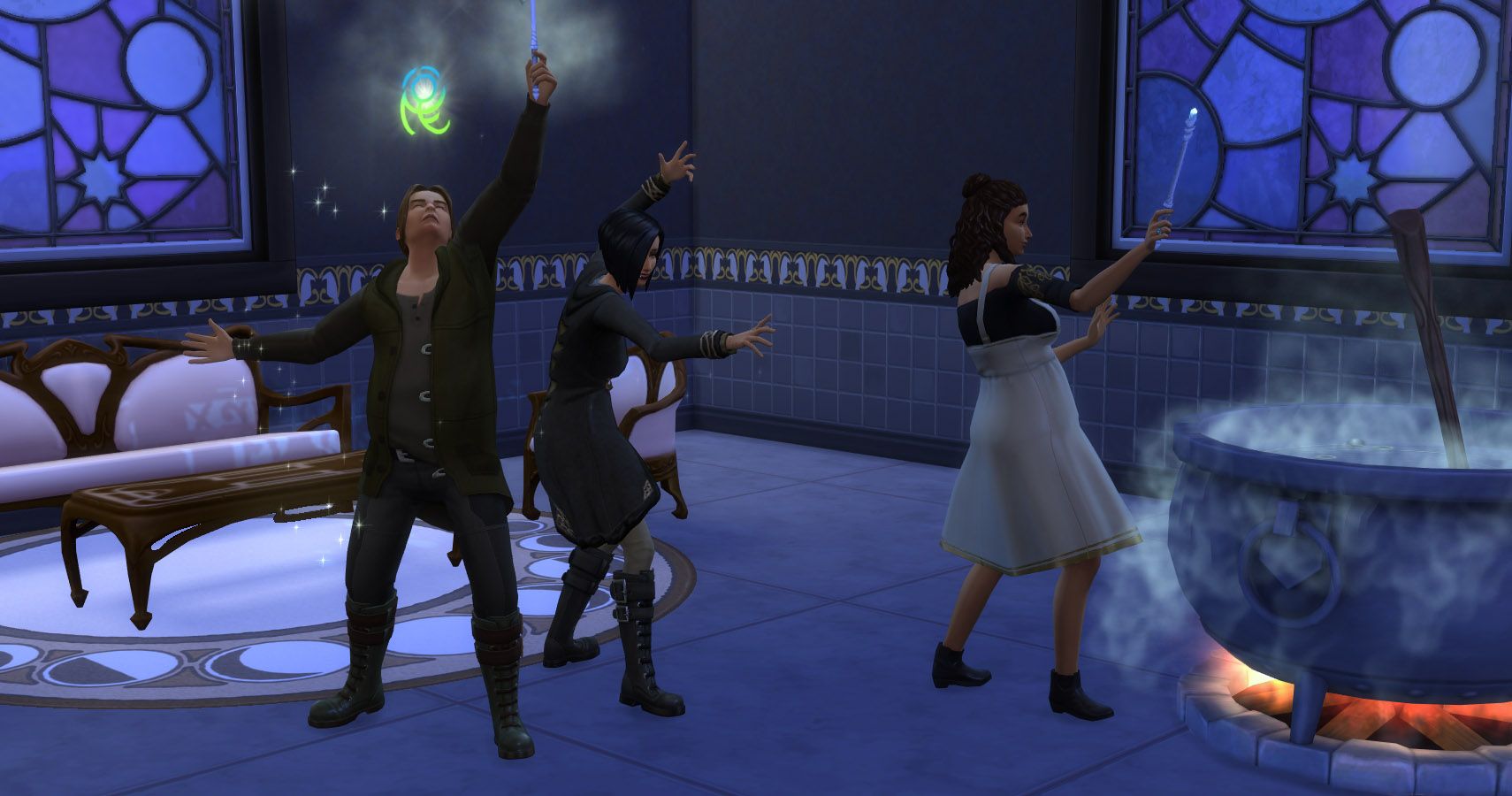 Once your level increases you can also gain knowledge by dueling for knowledge with other sims and learn spells by asking higher ranking spellcasters to teach you. Casting spells you’ve learned and mixing potions will also help, so collect the Magical Realm’s ingredients and mix those brews.

As you get further through the Spellcaster ranks you will start to amass spellcasting charges. This meter is displayed at the top of your needs box and you need to keep an eye on it. If you gain too much charge then you will become overloaded, something that can kill your sim.

You may also gain a curse. These won’t fade and are triggered by magic-related failures but can be cured with a Potion of Decursify or by casting Decursify, which is a master rank untamed spell.

With spellcasting, the secret to success is to simply practice and learn. Just keep doing this and soon you’ll be a wizard, Harry.