Throughout the original Mass Effect trilogy, Commander Shepard is blessed with a great collection of allies. One of his most powerful and useful friends is Urdnot Wrex. While the Krogan spends most of his time assisting the protagonist, he also has his own arc going on in the background, which sees him go from a no-nonsense merc to the savior of his species.

The personal story gives the character more depth, but fans liked him from his first appearance anyway. From his badass nature to his surprising wit, Wrex is a constant source of excitement. And his fanbase has found a way for him to be even more entertaining by making him the subject of many great memes, like the following ones. 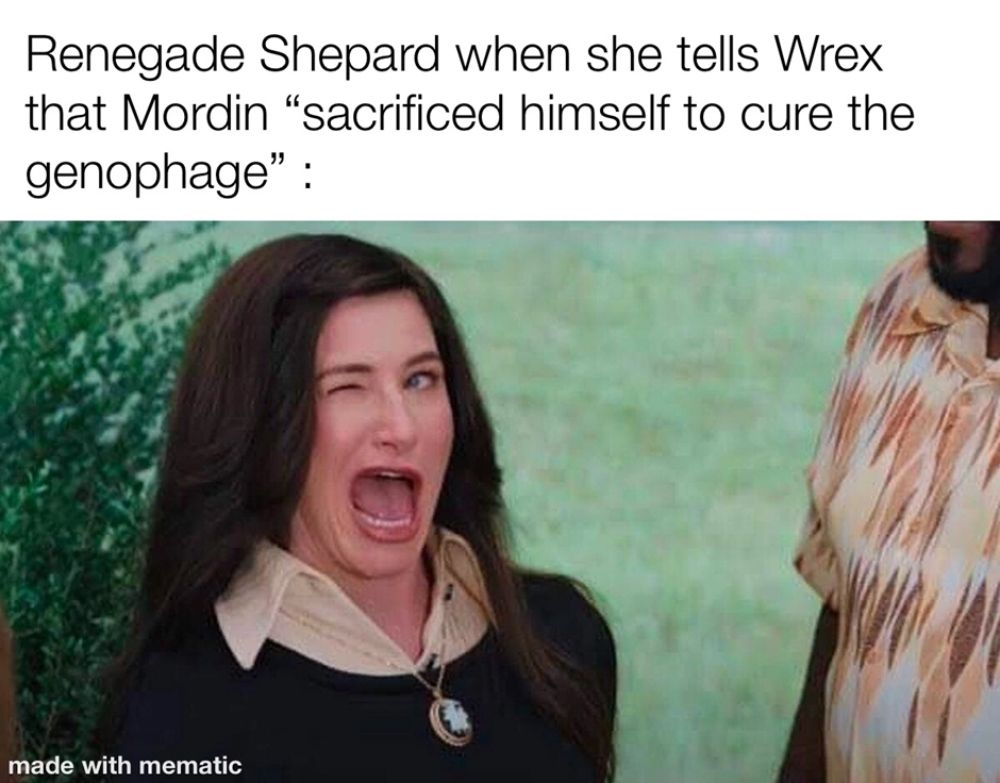 Renegade Shepard does a lot of awful things during the trilogy. However, one of their worst acts is lying to Wrex about curing the Genophage. It occurs during Priority: Tuchanka When Mordin is in the Shroud ready to rid the planet of the plague.

You can stop him in a couple of ways, all of which lead to the disappearance of Mordin. Shepard then lies to Wrex, claiming the Genphage is gone, and the Salarian sacrificed himself to make it so. This meme has made the awful moment humorous.

9 Every Fan Would Know How To Respond 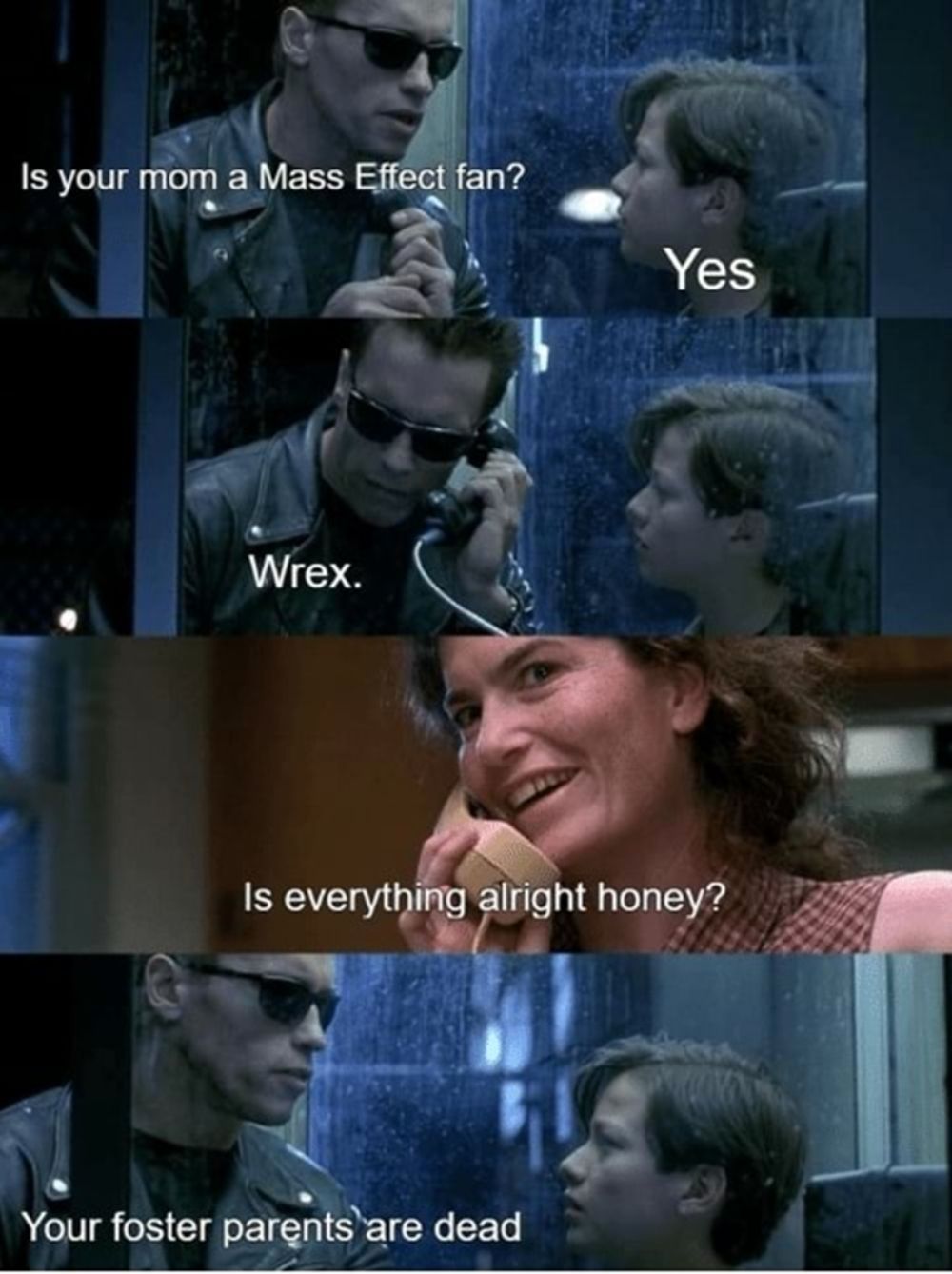 Wrex delivers plenty of badass lines during the series, yet his most famous one is probably “Shepard.” He says the name every time the Commander engages him in conversation during the first game. And in turn, Shepard ends every interaction with the big man with “Wrex.”

So if you start and then immediately end a discussion with the Krogan, all they say is each other’s names. As a result, the short interaction has since become a meme within the fanbase. And as this particular meme points out, by saying one of their names, you can determine whether the person you’re speaking to is a ME fan based solely on their response. 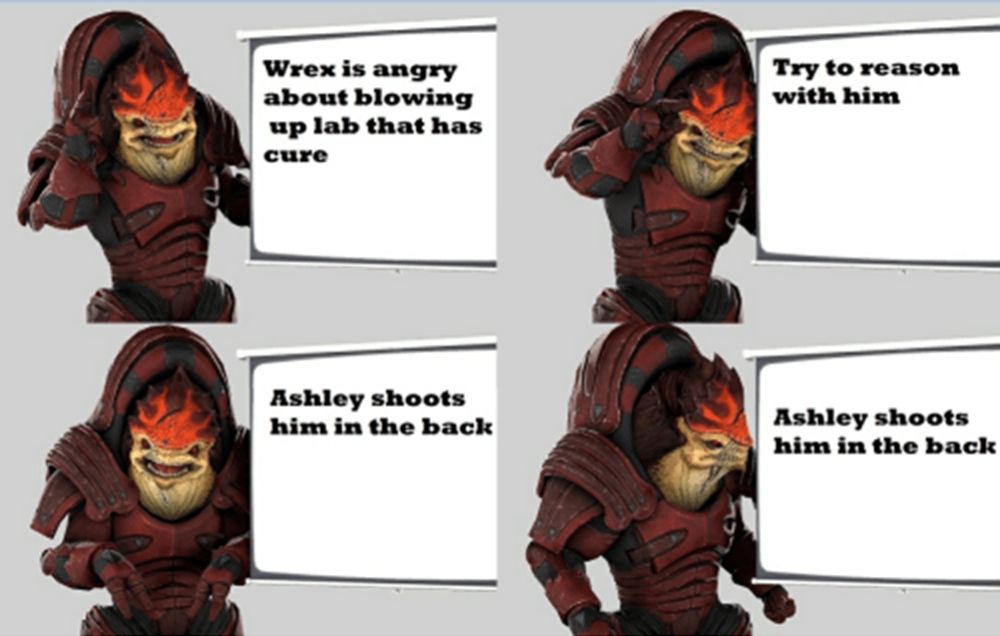 Virmire is a big mission for everybody’s favorite Krogan as Shepard intends to destroy a cloning facility that may have the cure for the Genophage. Naturally, Wrex is upset at the idea of blowing up a place that could help his species. It leads to an intense conversation between the Krogan and Shepard.

You have to be careful during the interaction as it can end badly for Wrex as Ashley is partially to blame. If she doesn’t like where the discussion is heading, she’ll murder Wrex in cold blood. The purpose of the immoral act is to save you, but it can come out of nowhere, as this meme suggests. 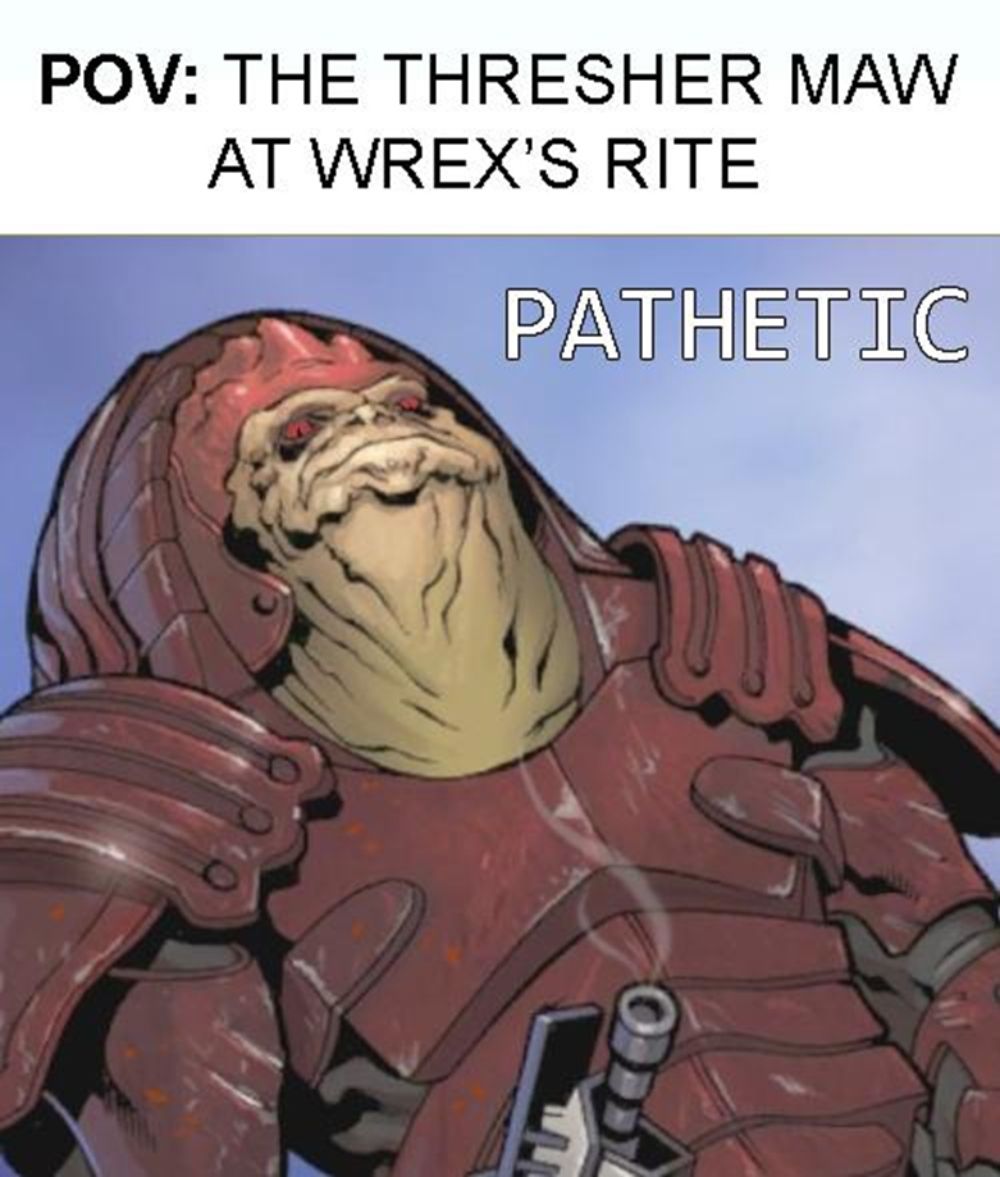 During Mass Effect 2, you learn a lot about Krogan culture when you visit Tuchanka with Grunt. One of the main reveals is that the Krogan people go through a Rite of Passage when they’re young. As it’s the Krogan, the Rite includes plenty of combat, including a fight with a Thresher Maw.

Before the events of ME2, the last Krogan to kill a Maw during their Rite was, of course, Wrex. The game doesn’t show the battle, but this meme visualizes its ending. 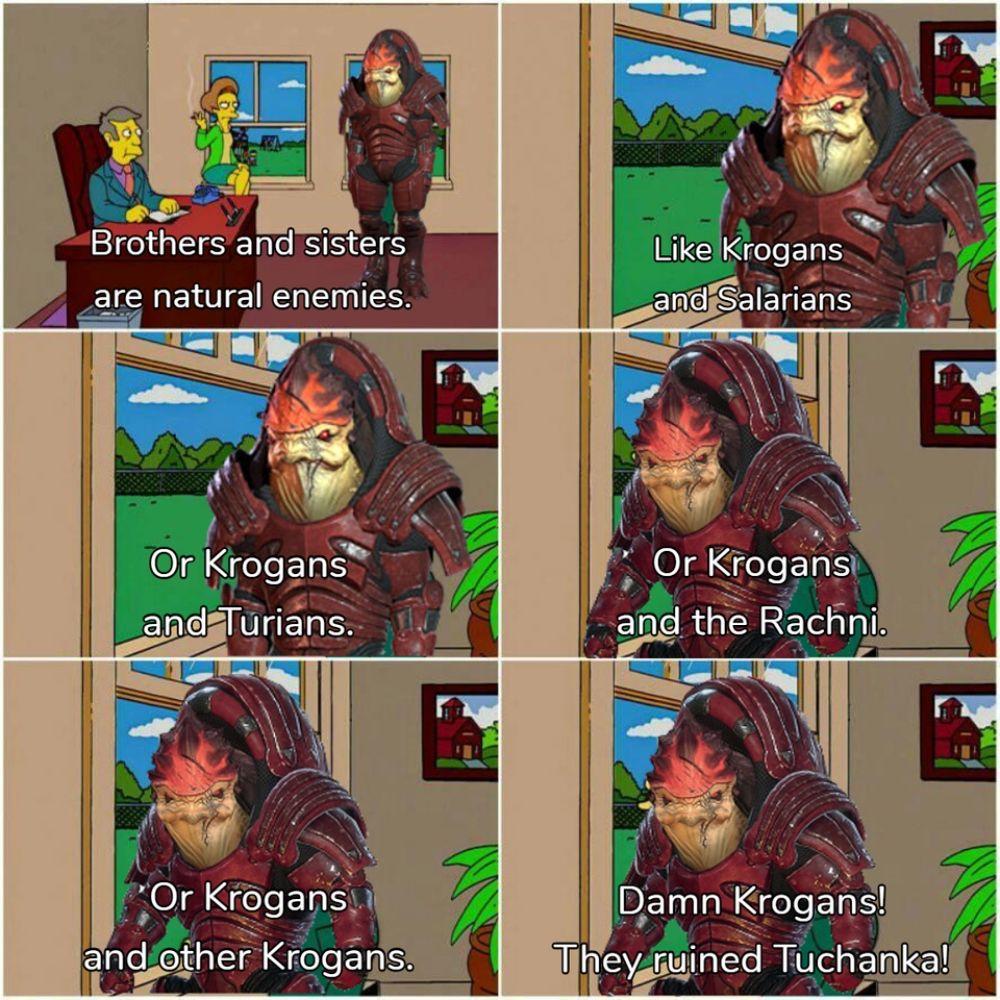 There are many things you might not know about the Krogan, but you’re probably aware that they’re a confrontational bunch. And during their time in existence, the species has acquired plenty of enemies.

Their main rivals are either the Turians or Salarians, who were forced to create the Genophage to stop the large beasts. But they also went to war with the Rachni during the accurately named Rachni Wars. The creator of this meme has used these feuds to re-create a classic scene from The Simpsons.

5 Shepard’s Time In A Gang 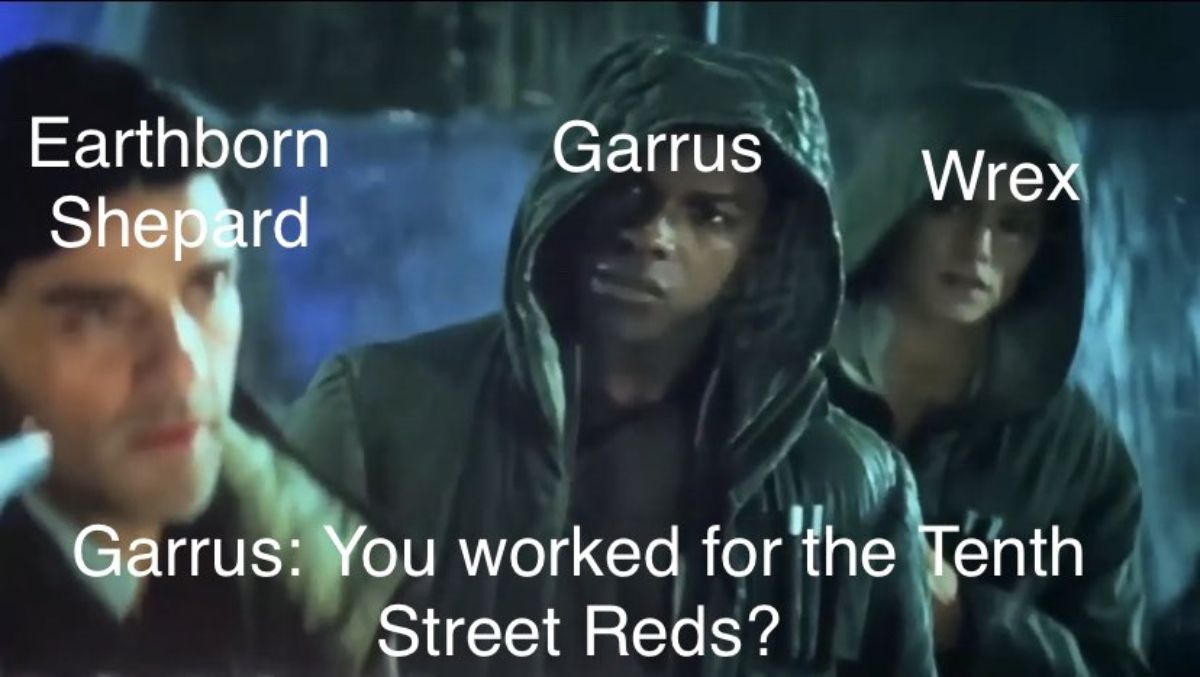 At the start of the first game, you get to select a back story for Shepard. The Earthborn version has a difficult past involving gang activity. A little later in the game, you find out the gang Shepard was involved with was the Tenth Street Reds.

You don’t learn a lot about the group, except that they’re very xenophobic. As the Commander has a squad that includes plenty of aliens, his prior allegiance probably created an icy situation on the Normandy. In this meme, you can see how both Wrex and Garrus likely reacted to the news. 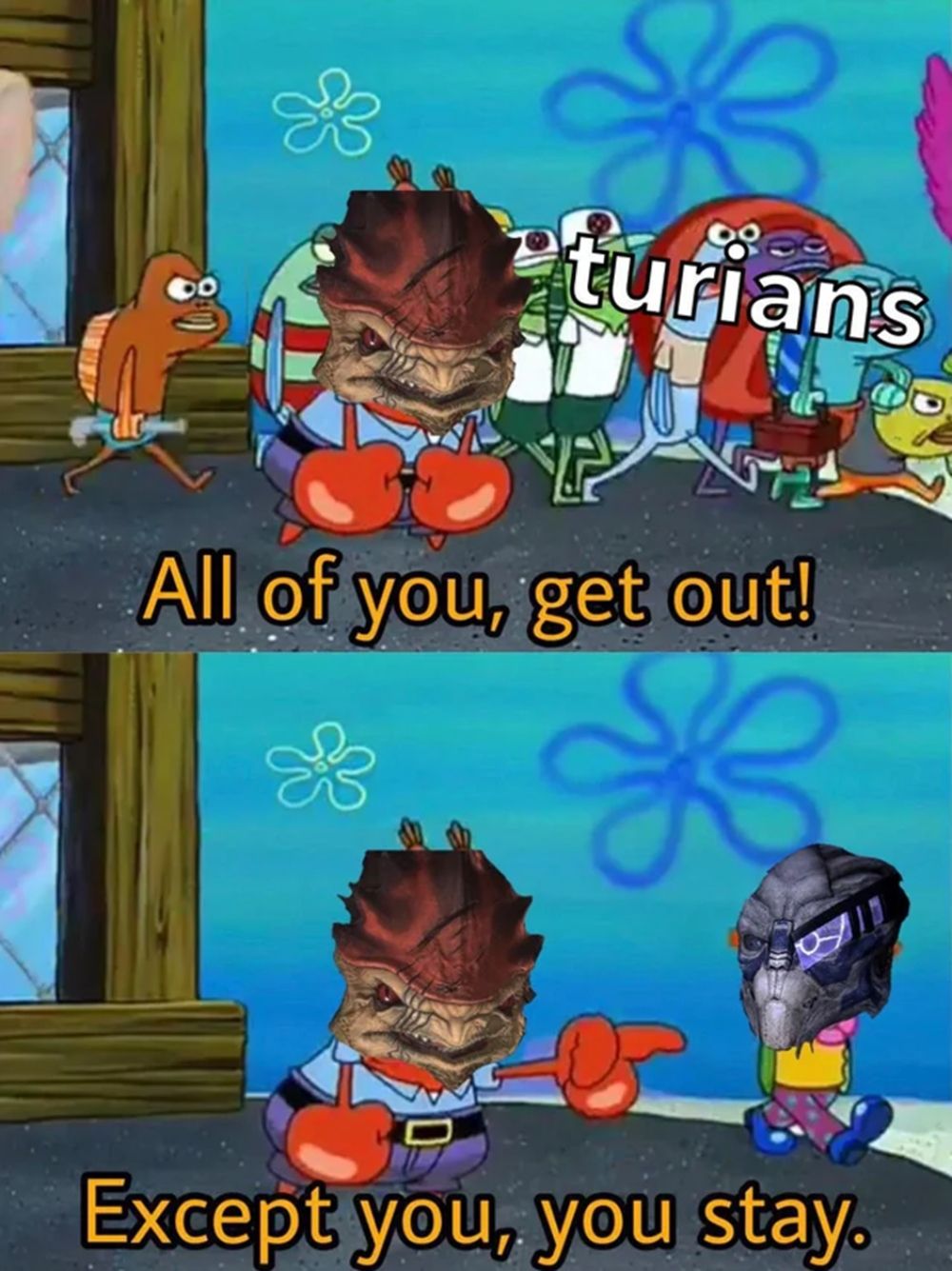 Because of their part in the Genophage, Wrex isn’t generally too fond of Turians – like most Korgan. Yet, as this meme points out, there is one Turian that the Mercenary turned Clan Chief appreciates – Garrus.

Throughout the games, the two build up a strong bond that includes plenty of witty back and forth. It’s understandable that Wrex would put species rivalry aside for the former C-Sec officer as he’s very likable. In fact, Garrus is one of the few characters in the series as popular as Wrex himself. 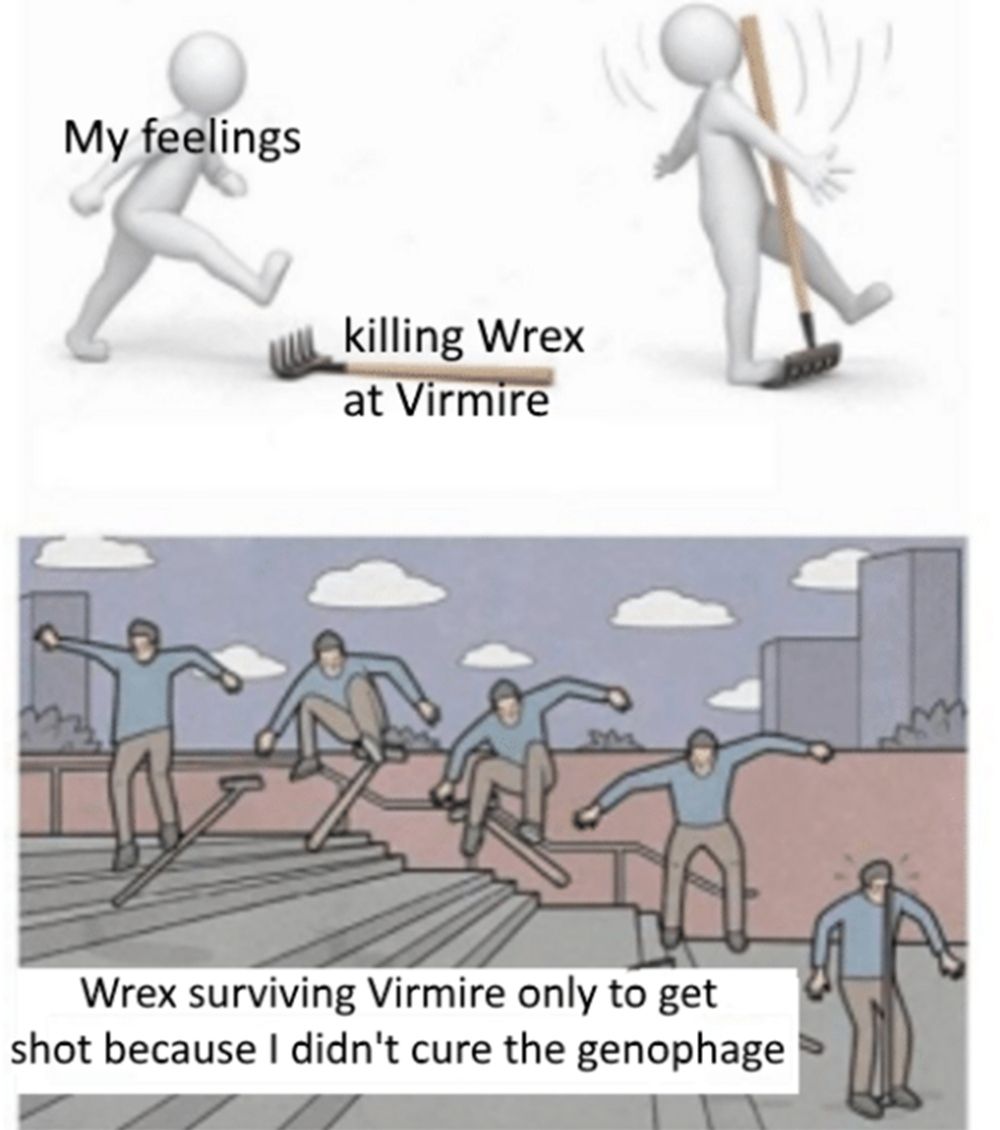 Despite being one of the strongest characters in the series, it’s easy to kill Wrex off accidentally. Firstly keeping the Korgan alive on Virmire is hardly simple if you don’t know what you’re doing.

Then two games later, his life hangs in the balance again during Priority: Tuchanka, when you have to decide to cure the Genophage or not. Many first-time players will have avoided the first pitfall but fallen into the second, and this meme shows their process.

2 He Goes Through A Lot Of Pain 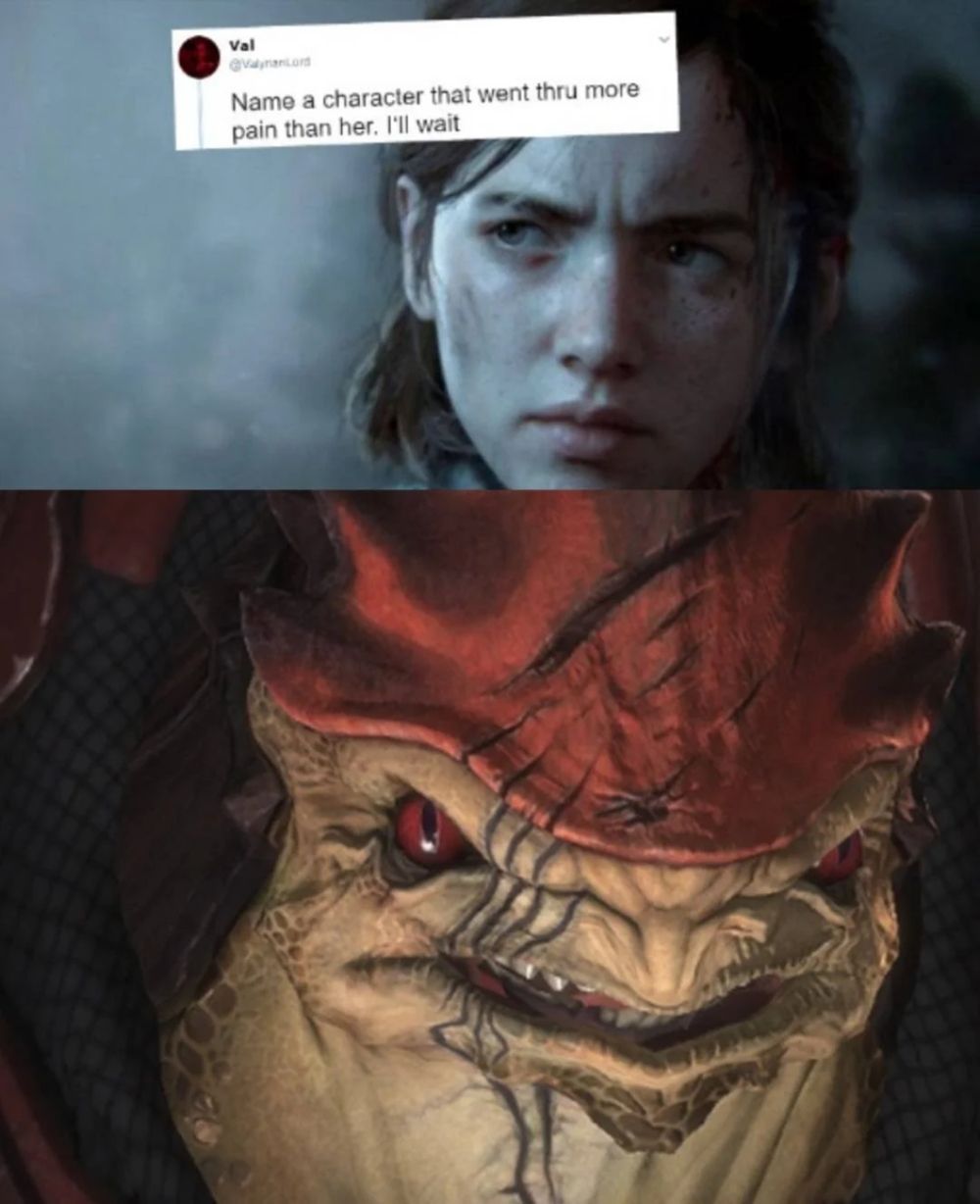 It’s fair to say that Wrex has never had the easiest life, and these are several of the reasons why:

Few have had a life as painful as the one Wrex lives, so this meme comparing him to Ellie from The Last of Us is accurate.

1 Lord Of The Rings Reference 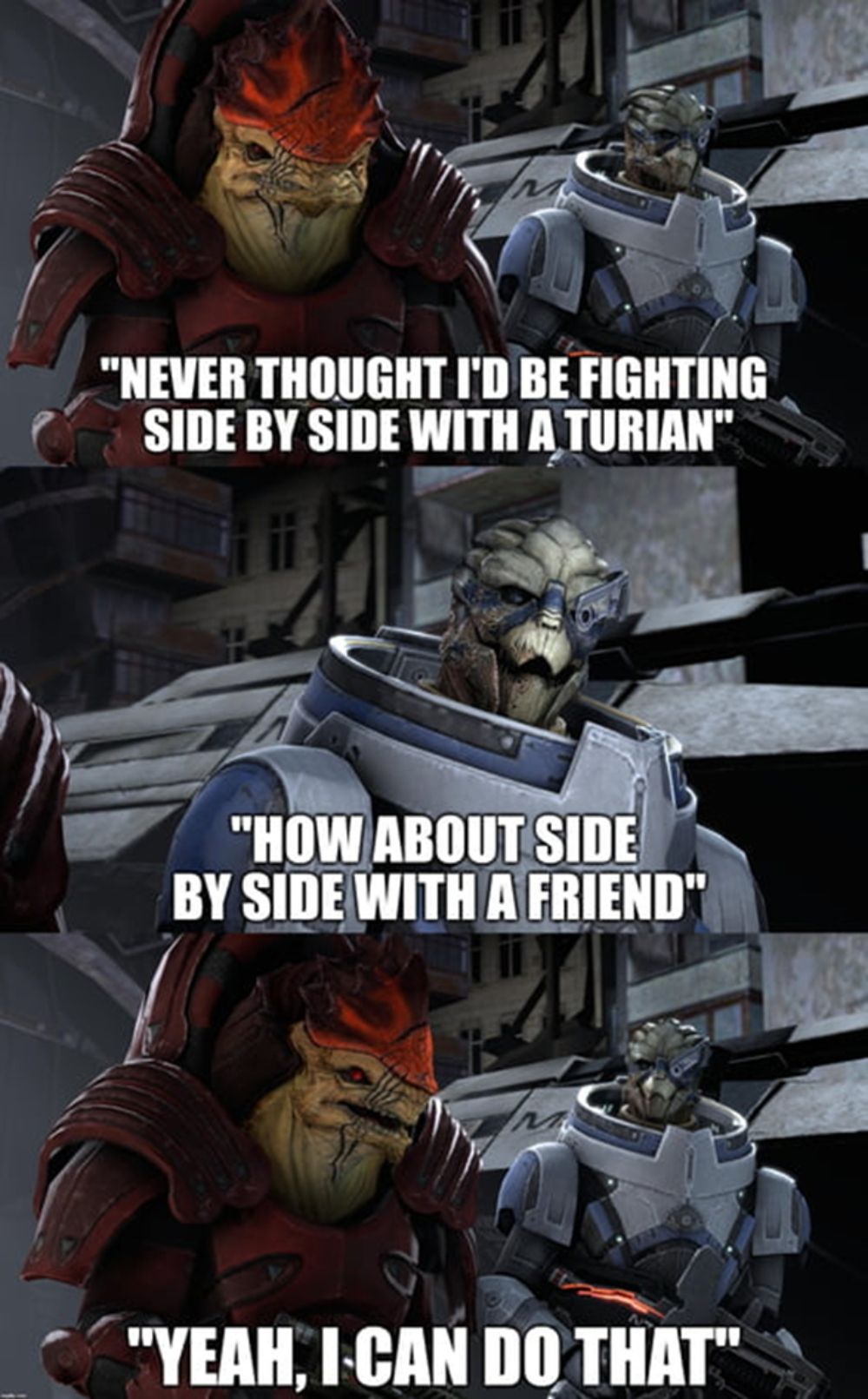 As they’re individually two of the most beloved squadmates in the series, it’s no surprise that Wrex and Garrus are a popular tandem. Both of them are part of rival species, they share witty banter about their own combat abilities, and their fighting styles are very different.

These are all aspects of Garrus and Wrex’s friendship, but they also describe the duo of Legolas and Gimli from Lord of The Rings. The two iconic pairings are very similar, and in this meme, the Mass Effect team is recreating a classic Legolas and Gimli interaction.