Garrus’ loyalty mission in Mass Effect 2, Eye for an Eye, sees Garrus finally having the opportunity to enact vengeance on Sidonis, his former partner who betrayed their squad on Omega.

In order to gain Garrus’ loyalty and make sure he survives the suicide mission in the Collector base, you will need to help him locate Sidonis and decide whether Garrus should kill him or not.

So, if you want to make Garrus loyal and ensure that he appears in Mass Effect 3, look no further than this Mass Effect 2 Garrus loyalty mission guide, which includes all kinds of useful information on where to find Fade, what happens if you shoot Harkin, and whether you should let Garrus take the shot or move to the side.

How To Start Garrus’ Loyalty Mission In Mass Effect 2 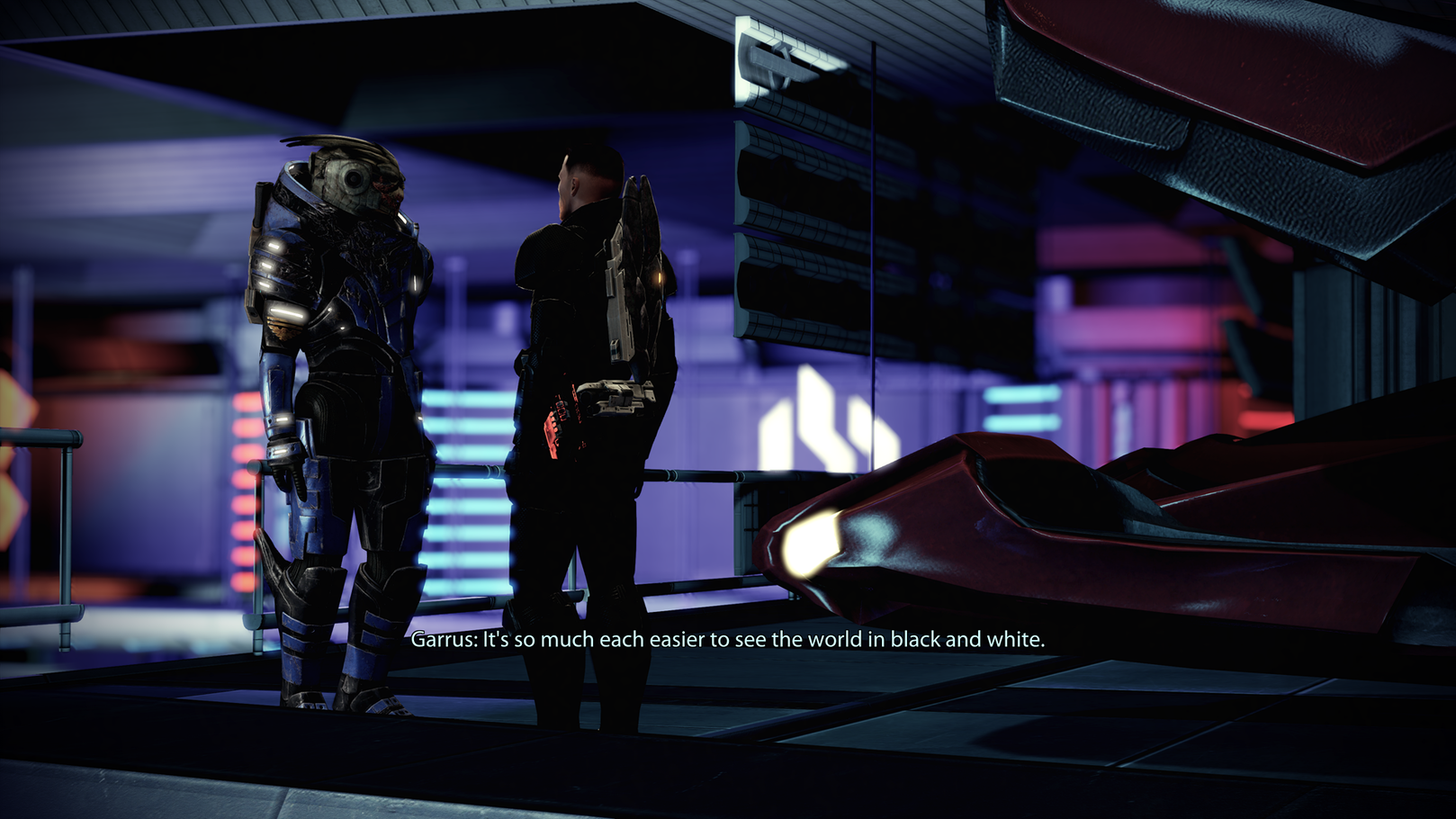 Garrus’ loyalty mission is acquired after having him on the Normandy for several quests. Eventually, Kelly Chambers should let you know that Garrus wants to talk to you, which is your cue to visit him at the main battery on deck three. He will tell you that he has tracked down someone who knows of Sidonis’ whereabouts and ask you to go to the Citadel to find more details.

As with all of the other loyalty missions in the game (except Legion’s), this should be completed before embarking on the acquire Reaper IFF mission, which is the first part of Mass Effect 2’s endgame section. If you leave this until afterwards, you may lose squadmates and crewmates, so if you’re going for a perfect run where everybody survives the suicide mission, this quest and all other loyalty missions should be completed before going to acquire the Reaper IFF.

How To Complete Garrus’ Loyalty Mission In Mass Effect 2 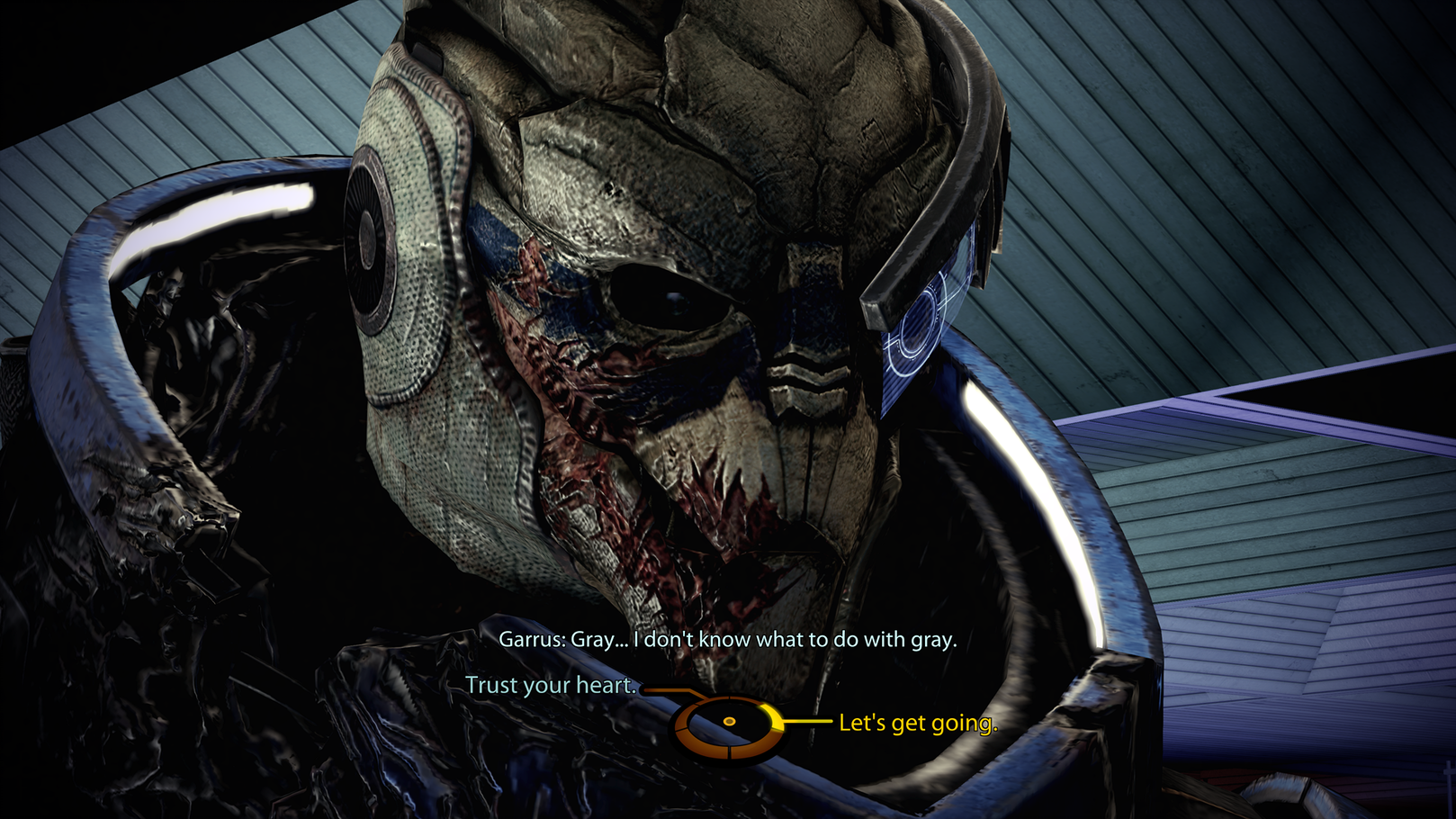 The first thing you need to do after acquiring this mission is head to the Citadel. When you land, go straight through to C-Sec, which is the first location you’ll encounter after walking through customs. Speak to Captain Bailey on the right and ask about Fade. He’ll tell you to go to the warehouse, where one of Fade’s agents is currently operating out of. You can locate the warehouse area of the Citadel on the western side of the minimap.

Head over to the warehouse and you’ll meet a volus with two krogan bodyguards. You can shoot the krogan with a Renegade interrupt, but you don’t need to fight them, so if you’re playing a Paragon Shepard just ignore the prompt and Garrus will scare them off anyway. The volus will be left on his own and will tell you that Fade is Harkin, the ex-C-Sec officer who originally told you where to find Garrus in the first game.

Harkin is located in the Factory District, which can be accessed from any Citadel Rapid Transport unit. There’s one just outside the warehouse if you go out to the marketplace and head left. When you arrive here, you will need to fight through several waves of mercs and LOKI mechs. There are also three large mechs towards the end, two of which will jump down at the same time in front of the building Harkin is hiding in. These have a lot of health, but you can easily beat them by using Garrus’ Overload ability, as well as another Overload user like Kasumi or a different tech squadmate like Tali or Mordin.

After defeating the first large mech, you will move into a container. Interact with the shutter on the far side to gain access to the final area, which is where the two mechs will spawn. Take these down and move up towards Harkin. Garrus will extract the info he is after and will move to shoot him in the leg. You can trigger a Paragon interrupt here for morality points, but even if you let Garrus shoot Harkin, he won’t kill him, so it doesn’t really matter and mostly pertains to whether you’re playing Paragon or Renegade. 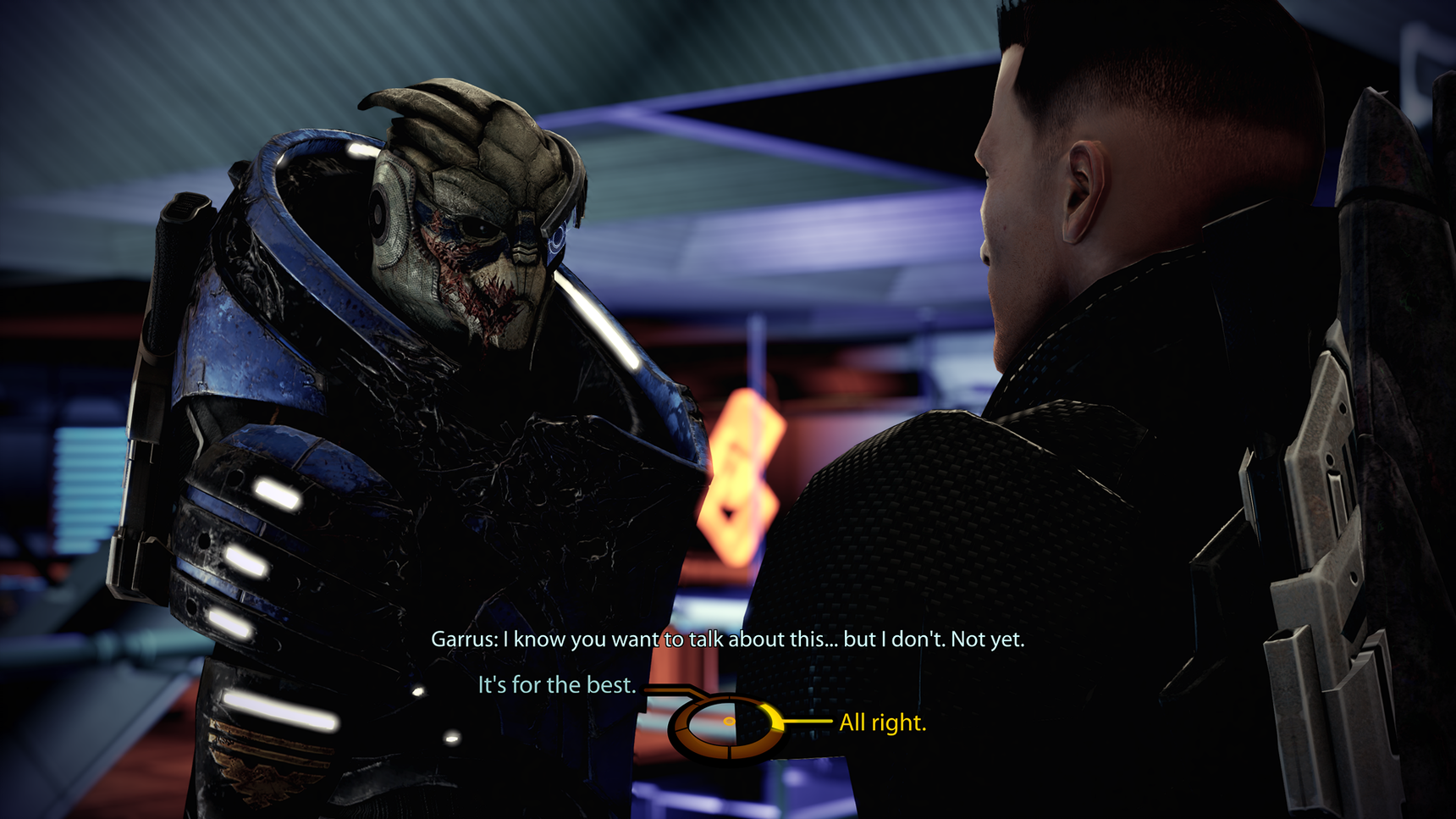 Harkin sets up a meeting with Sidonis, which leads to the final phase of the mission. After the cutscene, you will automatically arrive at the meeting point in the Orbital Lounge. Your job is to distract Sidonis while Garrus moves into position.

This is where the main decision for Garrus’ loyalty mission comes into play. You can choose to either warn Sidonis that Garrus is here or move out of the way on Garrus’ signal so that he can take the shot. It doesn’t matter which choice you make – you’ll gain Garrus’ loyalty either way, so this is once again mostly about whether you’re playing Paragon or Renegade.

The easier option is to just move out of the way and allow Garrus to take the shot, as it ends the quest quickest. If you warn Sidonis, however, and continue to talk to him after successfully executing a Paragon interrupt, Garrus will start to get annoyed. Meanwhile, Sidonis will open up about what really happened – mercs threatened his life and he revealed his squadmates’ location out of fear. He feels guilty to this day and is haunted by their faces at night. While Garrus doesn’t forgive him, you can tell him that Sidonis is already paying for his crimes and Garrus will eventually decide to back down. This is the option I personally go for, as Garrus seems grateful that he didn’t need to kill his former friend after you return to the Normandy shuttle, noting that he was still able to see good in him. Again, though, it’s up to you – Garrus’ loyalty mission is structured in such a way that completing it will ensure his survival on the suicide mission either way.

Once you’re finished, talk to Garrus on the Normandy about what transpired. If Sidonis survives, there will be a news report in Mass Effect 3 stating that a turian named Sidonis died protecting a group of civilians from the Reapers.