As an apocalyptic winter snowstorm engulfs New York City, a cop framed for murder embarks on a blood-soaked quest for vengeance. This is the pulpy premise of Max Payne, a stylish 2001 shooter by Remedy Entertainment—the Finnish studio behind Alan Wake, Quantum Break, and Control. This was one of the first games to make a back-of-the-box feature out of bullet time, the slow-motion effect popularised by The Matrix. When the game launched, pop culture was still feeling the aftershocks of the Wachowskis' groundbreaking movie. Fans were desperate for a sequel, meaning Remedy couldn't have picked a better time to bring Max Payne into the world.

Returning home after work, Max steps into his idyllic suburban home and finds his wife and newborn daughter murdered—killed by addicts high on a dangerous designer drug called Valkyr. In a New York minute his world is turned upside down, and he swears revenge on the people responsible. Three years later, Max is working undercover for the Drug Enforcement Administration, embedded deep inside the Valkyr-trafficking Punchinello crime family. Then his life takes another grim turn. He's framed for the murder of a fellow DEA agent and flees for his life, pursued by the mob, the NYPD, and a sinister secret society known only as the Inner Circle.

Remedy is a studio known for having an offbeat, idiosyncratic take on established genres, and Max Payne is no different. On the surface it seems like a pretty standard Scorsese-influenced New York crime/mob story. But as you delve deeper into it, a curious mythological undercurrent reveals itself. There's a surreal, dreamlike quality to the game, with its eerily abandoned streets, endless snow, disorientating nightmare sequences, and frequent invocations of Norse mythology. There are multiple pointed references to Ragnarok, the end of the world, and the dark, bleak tone of the game does make it feel like civilization is collapsing around you. 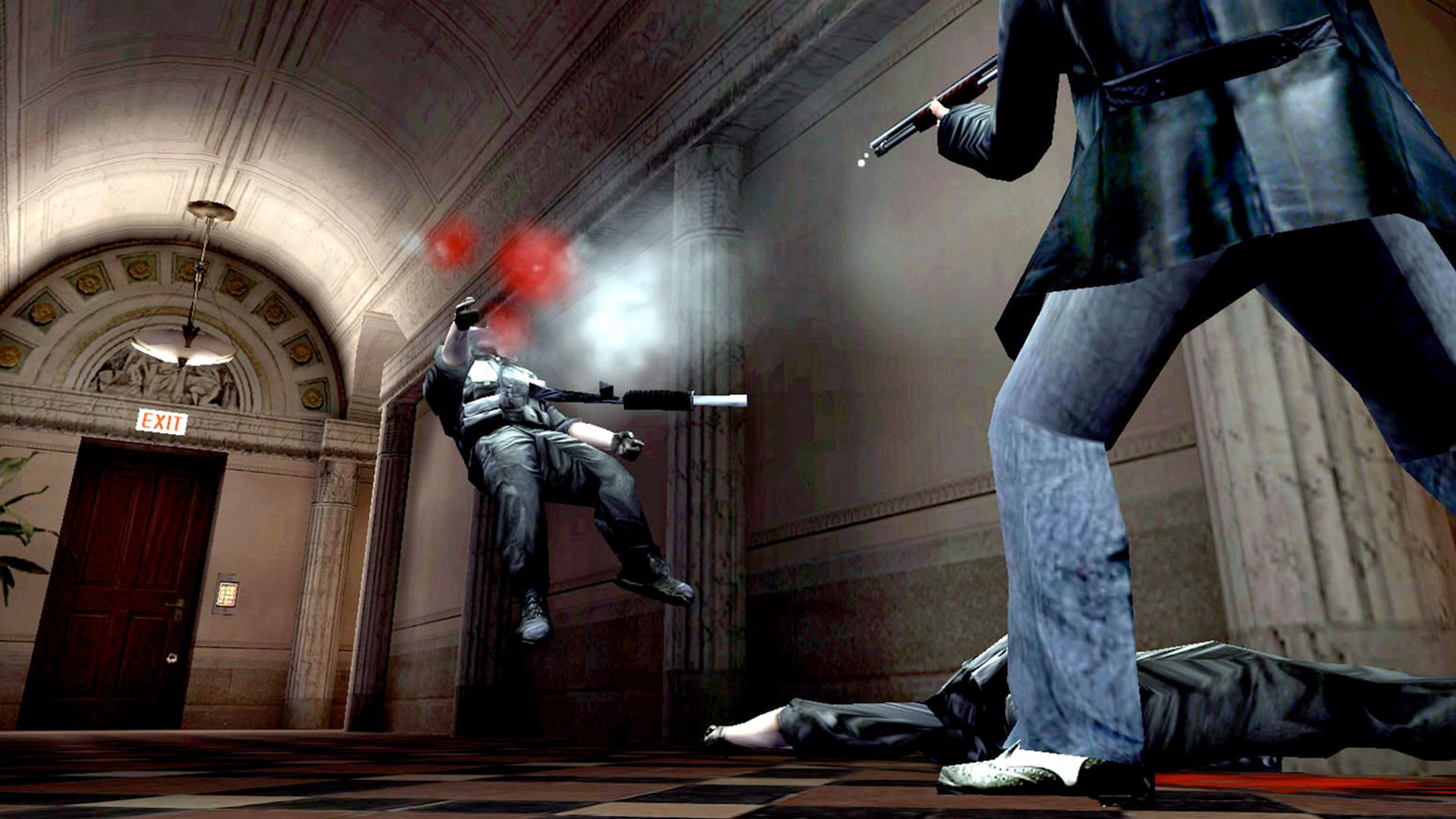 But what makes Max Payne really special is how it punctuates its apocalyptic storytelling with some of the finest gun combat ever coded. You can send Max into a graceful slow-motion dive, which is the basis of some absolutely thrilling, chaotic firefights. Flinging yourself into a room full of mobsters and turning them into a pile of twitching corpses before they even get a chance to reach for their guns is powerfully satisfying—and just as fun as it was 20 years ago. It's like being the choreographer of your own hard-boiled Hong Kong action movie, and the balletic gunplay is magnificent to look at: a slow-mo whirlwind of spent shells, muzzle flashes, and debris.

It's one of the best action games ever made, but get this: it's also a great puzzle game. Before you approach a group of enemies you have to consider their positions, how they're armed, the weapons at your disposal, and the layout of the room. Then it's a case of figuring out the most efficient, ruthless way to deal with them, ideally without taking any damage yourself. Leaping into a goon-filled apartment without a plan is always a bad idea. But hurling yourself in and expertly killing them all with a carefully placed Molotov cocktail or a precisely targeted blast of dual Beretta fire—all in a single, glorious bullet time dive—is about as rewarding as video games get.

Adding a further layer of strategy to the combat is the fact that you can only use bullet time in short bursts. Managing this limited resource is the key to surviving the game's parade of tricky combat set-pieces—especially later on when the difficulty ramps up significantly. A standard enemy can kill you with a single close-range shotgun blast, so you never want to charge headfirst into a room and realise your bullet time meter is embarrassingly empty. Max Payne's combat doesn't just look good; it has depth too. That's a big part of why the game still holds up today. It's almost sandbox-like in its approach to combat, because there's never just one way to solve a problem. 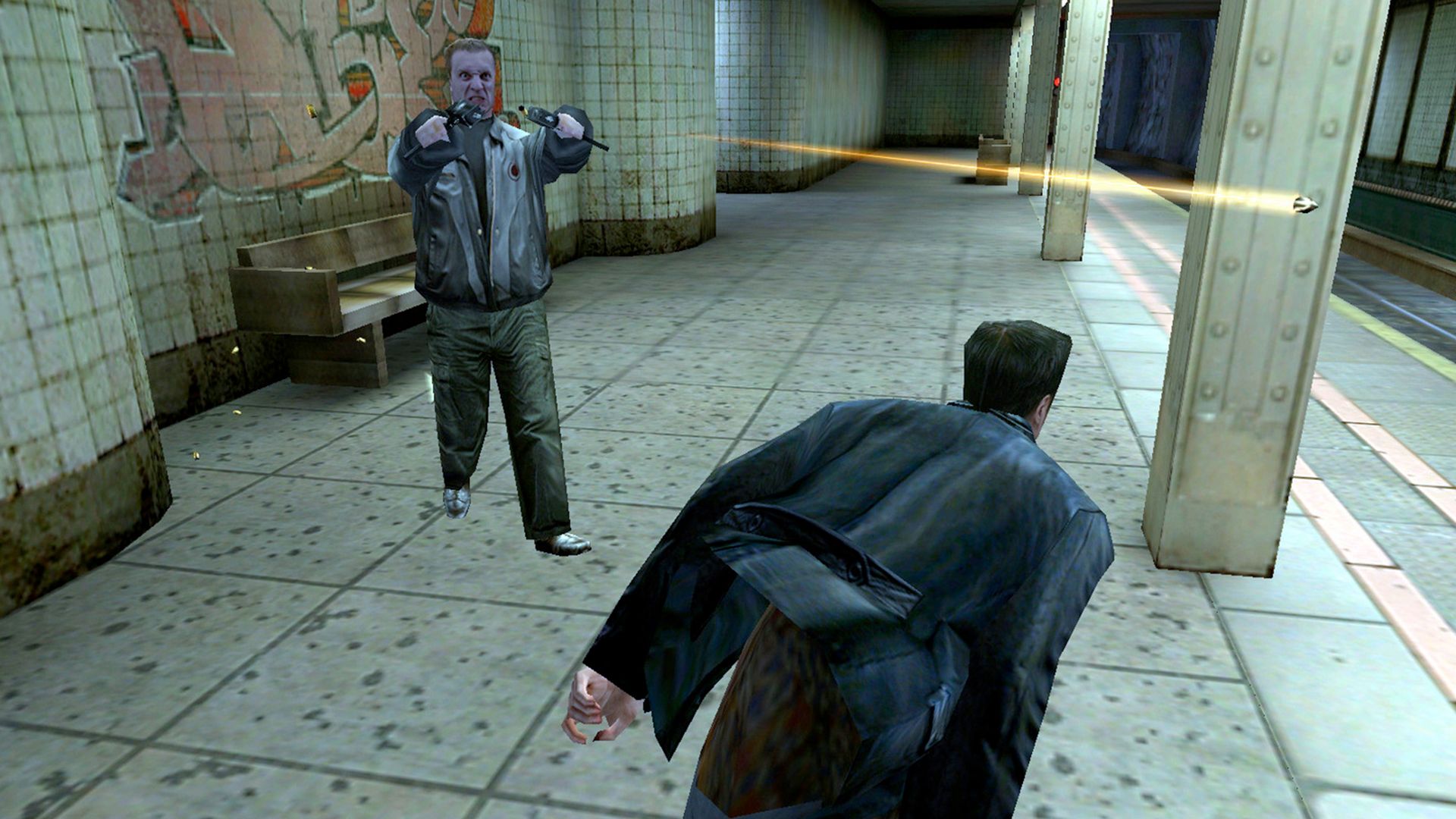 It also helps that Max is such a great character. He's a walking film noir cliche; a weary, downtrodden loner detective with a drinking problem, a string of dead women behind him, and a death wish. But writer Sam Lake—now creative director at Remedy—has fun poking fun at this, and there's a streak of jet-black, self-aware humour running through every laboured metaphor and nihilistic monologue. Lake doubles down on the stereotypes with a knowing splash of irony, and James McCaffrey brings Max to life perfectly, bringing a dry, whisky-soaked wit to the role. He plays it straight enough for you to care about him, but there's always that sharp edge of satire.

Max Payne is a stone cold classic, and I'm intrigued to see how Remedy approaches the newly announced remake. I'd love to relive Max's violent revenge odyssey with updated visuals and refined controls. But I'm also wary of the developer changing too much, because the original is so distinctive, and so of its time, that it might be tricky to recapture its very specific magic. Either way, I'm delighted more people will get to experience this story and spend time with Max as he shoots, leaps, and metaphors his way through the snow-battered boroughs of New York City. The fact Remedy is handling the remake at least ensures it's in the best possible hands.