Grab a gun, turn up the tunes and prepare for one kickass ride. Metal: Hellsinger is a heavy metal-infused demon hunter game where you play as the demon Unknown. She acts as a swift and aggressive protagonist who shreds through ghouls and fiends to the sound of epic heavy metal music. The music plays over top of you for the entirety of the game. This is important to recognize while playing because if you hit your shots to the beat of the song, you score perfect attacks that can melt your opponents quite easily.

Metal: Hellsinger is a rhythm game — one with demons seeking to kill you. When ideally shooting to the beat, it's imperative that you choose the best weapon to hit your combos. The beasts you encounter are fast and aggressive; if you choose the wrong weapon, you will certainly pay. 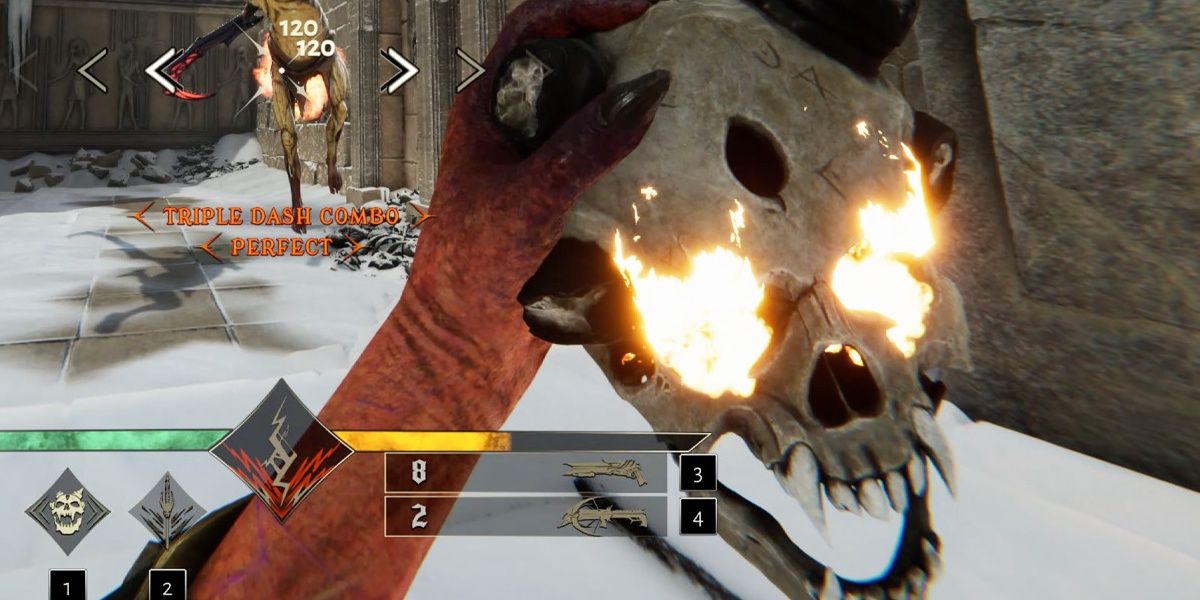 Quite easily the worst weapon in the game is Paz. It's a skull that you meet in the tutorial that can shoot fireballs at enemies. While intriguing at first glance, unfortunately, the skull is not very strong whatsoever. It takes a few flames to kill an enemy regardless of if you hit them perfectly to the beat. The way your character shoots the fire is rather fascinating, but aside from that, the skull is a bit useless.

You will find yourself using Paz mostly just to break down barriers or green crystals on the walls that drop health. Aside from that, you will rarely want to have this skull out as any source of a primary weapon. 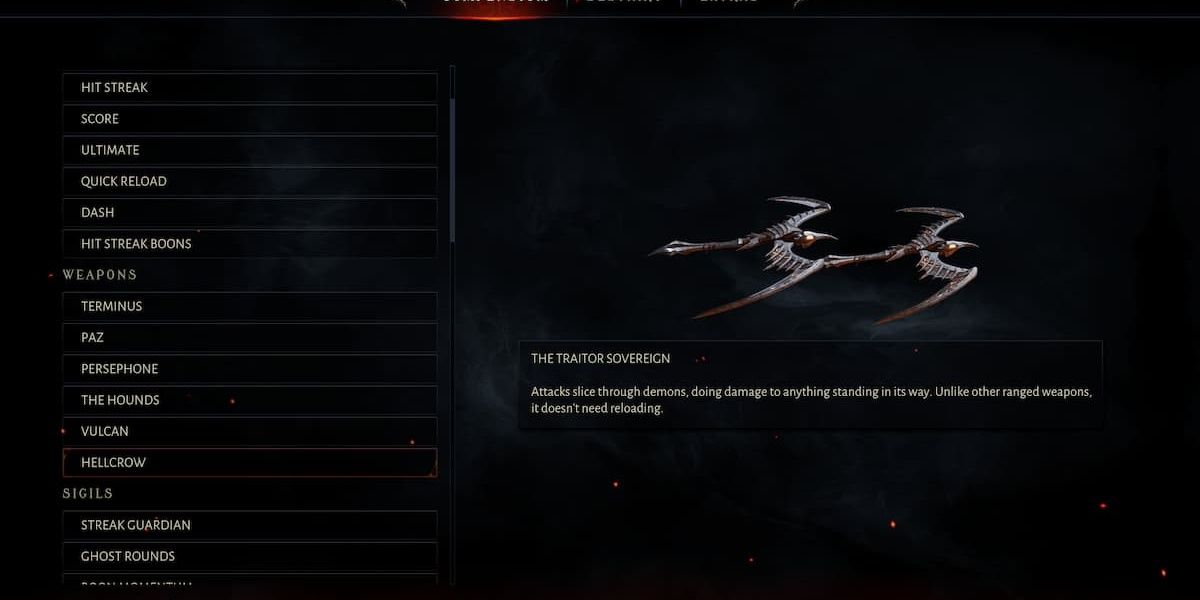 For the last unlockable weapon, the Hellcrow is rather underwhelming. It can be strong, but not anything groundbreaking like most final weapons should be in games. Typically, you want to work towards something in your games. Something like that last weapon that you're convinced will allow you to mow right through enemies. Well, the Hellcrow isn't that weapon.

The positive to this weapon, however, is its design. The Hellcrow acts as two boomerangs. When you throw them, they pierce the enemy and return to your hand. The best aspect of this design is the animation. When you throw your Hellcrow, the once complacent steel boomerangs come alive, with wings flying through the air in resemblance to a crow.

The first weapon you receive within the game is a long sword named Terminus. You walk through the initial tutorial with this blade attached to your hand and progress onward to the first level with it as well. Terminus acts only as a melee weapon; there is no option to throw it or shoot things out of it. You can slice your way through enemies, but that's about it. Since the enemies can be so aggressive, weapons with more range than Terminus seem to be a better option.

The most promising feature of the Terminus is its Ultimate attack. When your yellow meter fills up, the sword can be swung at a tremendous rate, mowing down any ghouls in your way. This attack is one of the more deadly in the game; however, the meter doesn't fill up fast enough to make this one of the must-use weapons in the game. 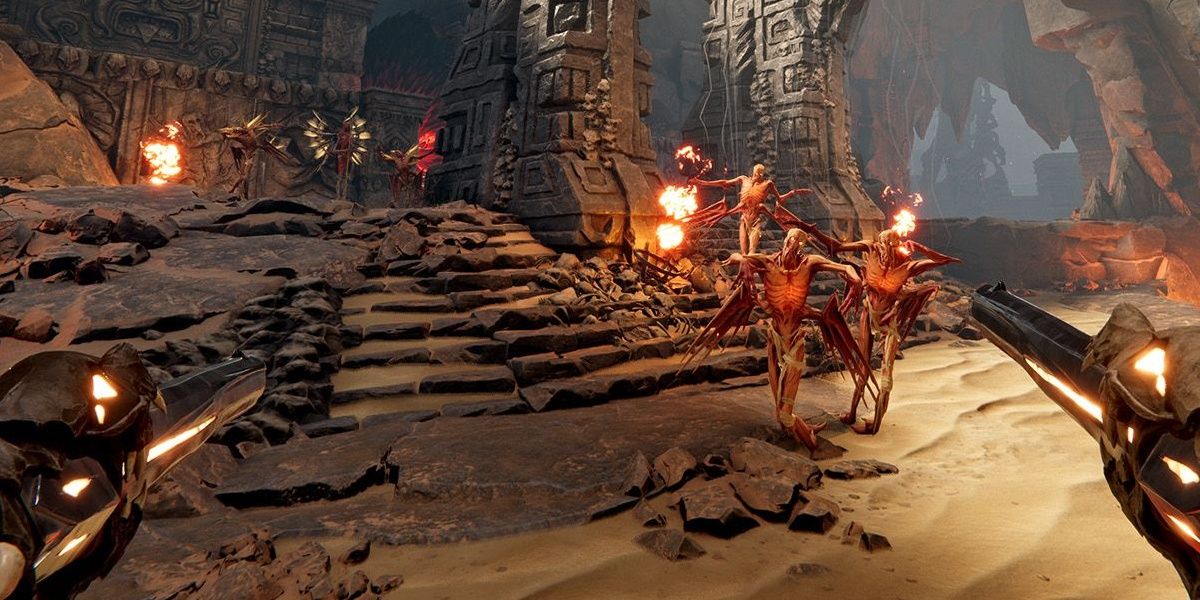 The Hounds are one of the quicker weapons to use in the game. They act as two pistols that fire one after the other. These guns are arguably the most enjoyable to attempt to stay on beat with. The back-and-forth firing that they deal creates an addicting challenge to hit the beat that can sometimes distract you from even shooting your target. Luckily, these have a very forgiving hit registration. You'll find that you are inches off at times, but somehow your bullets still connect.

The worst part about these weapons is that, instead of offering some rapid-fire ultimate attack when you release your ultimate while holding these guns, it just drops a decoy. This is useful, nonetheless, but it almost seems like a missed opportunity. Dual-wielding western-styled pistols seem like a no-brainer for an illusory shooting speed under the ultimate attack. 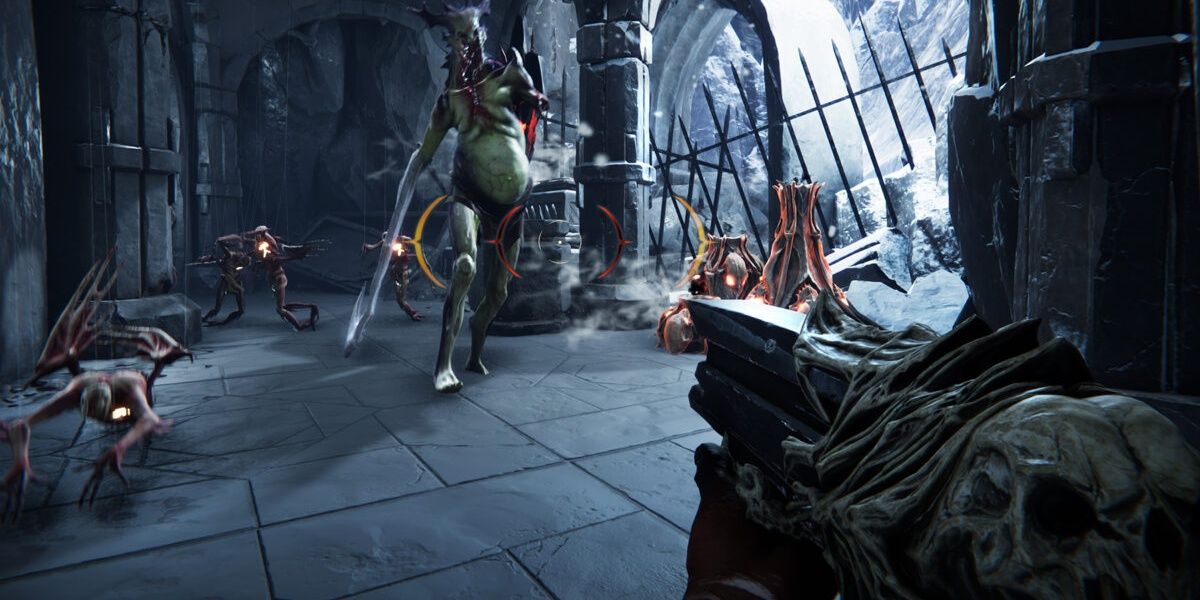 The Persephone is the first gun you stumble across in Metal: Hellsinger. Oddly enough, it's a gun you could play the entire game with. The gun appears to be a shotgun, but its range is unexpectedly far. This is not the strongest gun in the game, but it certainly holds up. The reload is decent, and the clip is sizable for the steady speed of the single-shot gun.

The Persephone has a sleek design that manages to have the perfect amount of metal themes without being too over-the-top. The white bone-like material that holds the butt of the gun together adds an adequate touch to an already stunning design, and out of every gun available, there isn't a better one to make a first impression on you. When you hold the Persephone for the first time, you instantaneously know what type of ride you're about to go on. 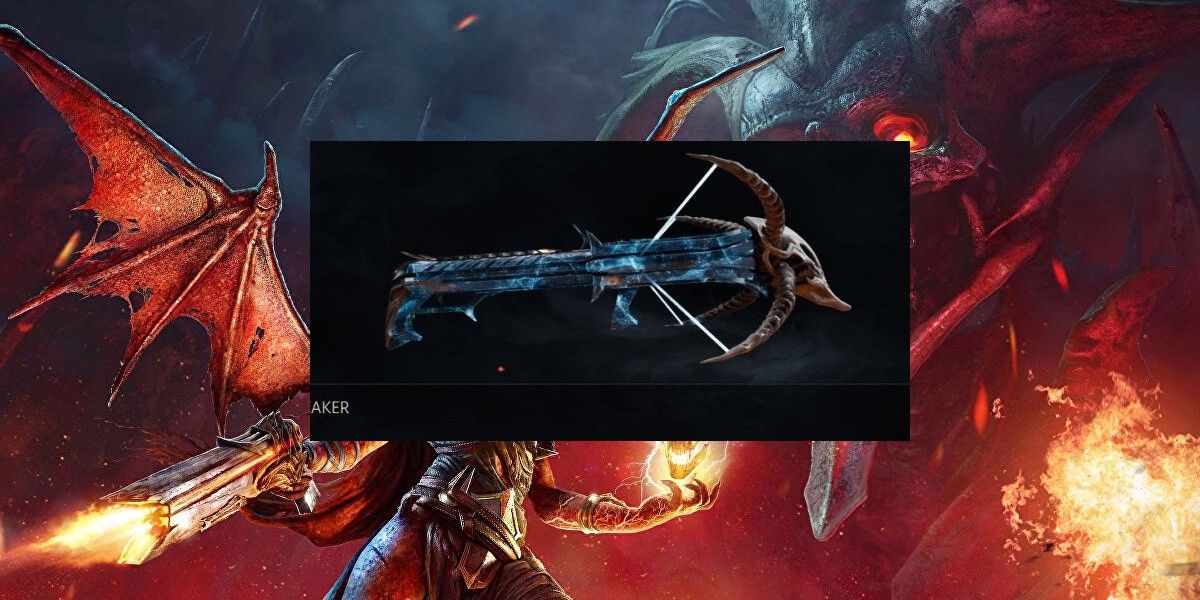 The Vulcan is the best weapon in the game both in its design and efficiency. It's a crossbow that explodes as each shot impacts an enemy, causing even more damage. The Vulcan is a ruthless bow that completely obliterates enemies on perfect hits. The range is exemplary and the damage this weapon deals is simply unmatched. It's quick and accurate, truly enhancing your abilities to succeed within the game.

The one downside would be you have to reload every two shots, but that is a minute issue due to the fact that this weapon reloads faster than the rest. There is simply no other weapon that can compete with the Vulcan, and this should have been the final gun you discover, acting as the last and best thing you uncover.