Finally, it’s time to stop losing your time with the aspects and fight the final boss in Metal: Hellsinger. You’ll face The Red Judge in Sheol, the last hell in the game. This battle will be different than the previous ones as the boss will have proper phases that change how you have to fight her.

The protagonist will reunite with Paz for this last encounter, ready to try to recover her voice. Let’s check everything you need to know about the fight against the Red Judge in this guide. 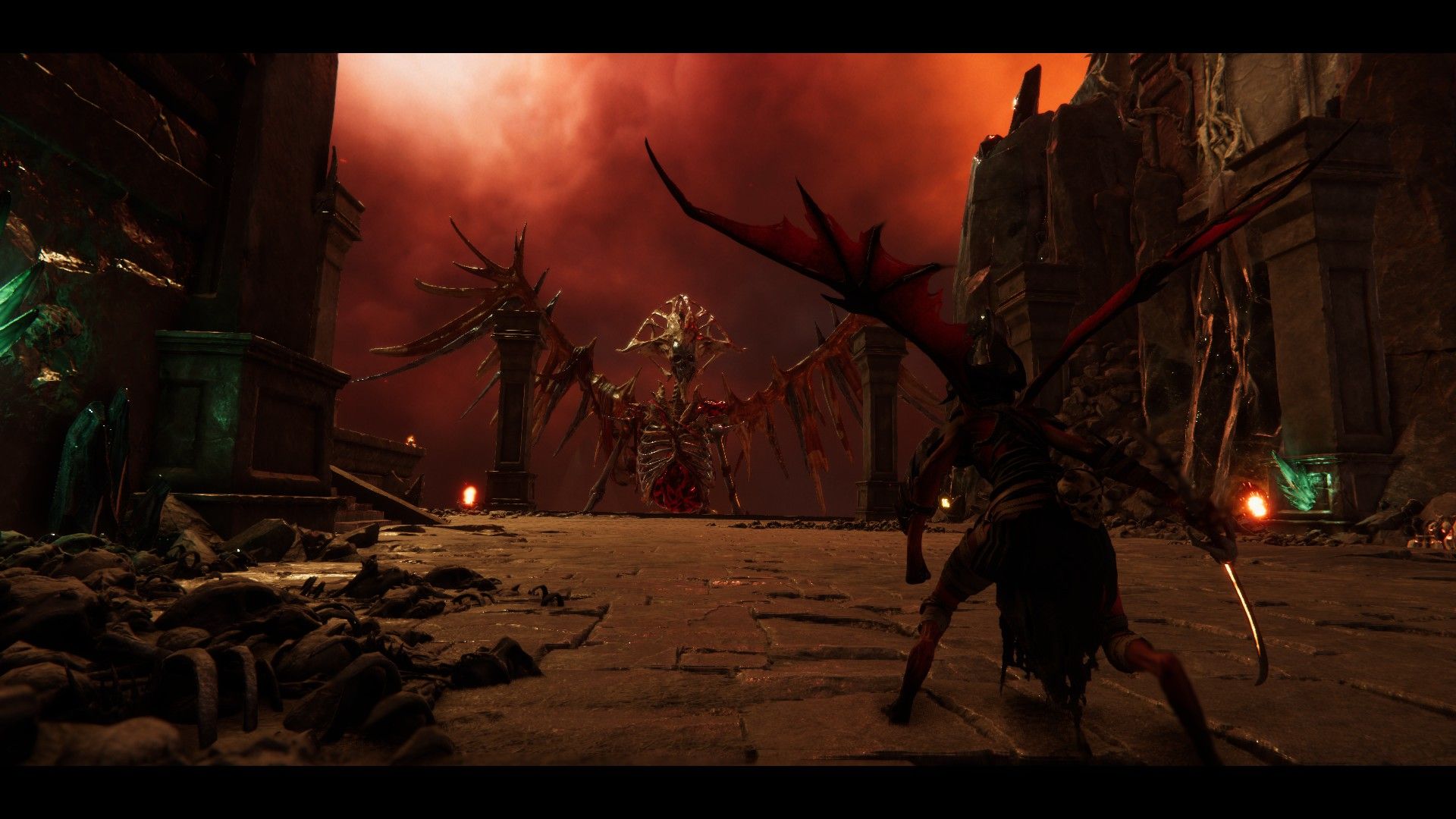 This arena will be unique in the sense that it will have more than one area in which you’ll have to fight. At first, the battle will be on the ground level, against a huge enemy showing her weak point under her ribs. There are two green crystals on the wall on the right in case you need to heal.

When enough damage has been made, you’ll have to climb some platforms on your left and reach the top of a cliff. Here you’ll fight the demon with slightly different rules, and you’ll have to focus on three different weak points — her left shoulder, her right hand, and her weapon. 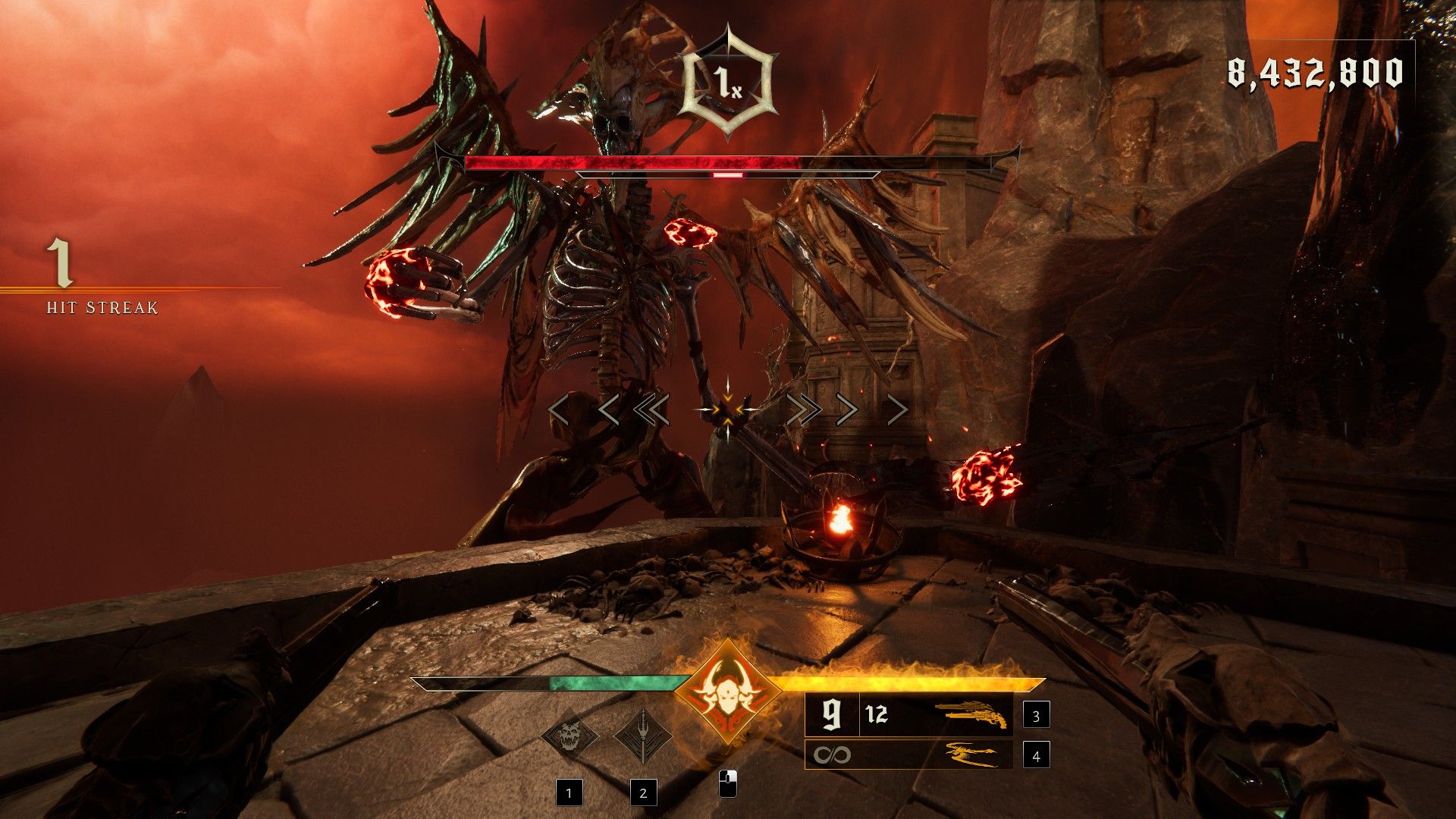 Every weak point will shine with red lights, so you know where you have to shoot.

Lastly, a final phase will take place again in the first location, with The Red Juge summoning three aspects, like the ones you have been fighting before. After dealing with them, you’ll have one final clash with the boss itself, who now will have her eyes as weak points. 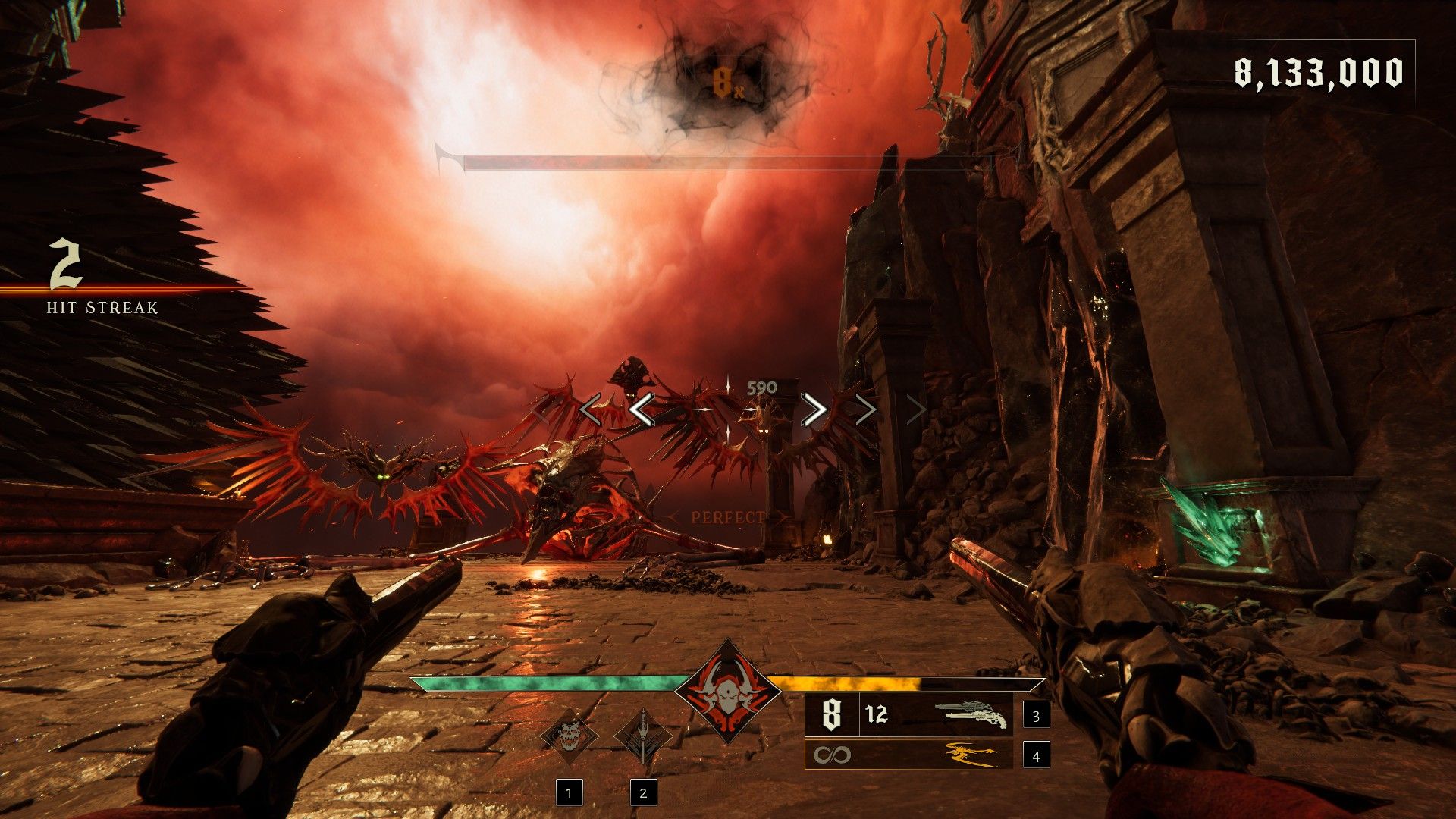 During this phase, the boss will throw a quick succession of projectiles from one hand, and horizontal lines of fireballs from her side. However, that’s not it. She will spit projectiles from her mouth, and multiple fireballs will rain down from the sky. Beware of the red ones, because they will produce the biggest circles of fire you have seen until this point.

When enough damage is done, The Red Judge will move towards you a final time. She will attack with projectiles from the sky, and she will move her hands. Shoot the only eye glowing red and you’ll complete the battle.

How To Defeat The Final Boss (First Phase) 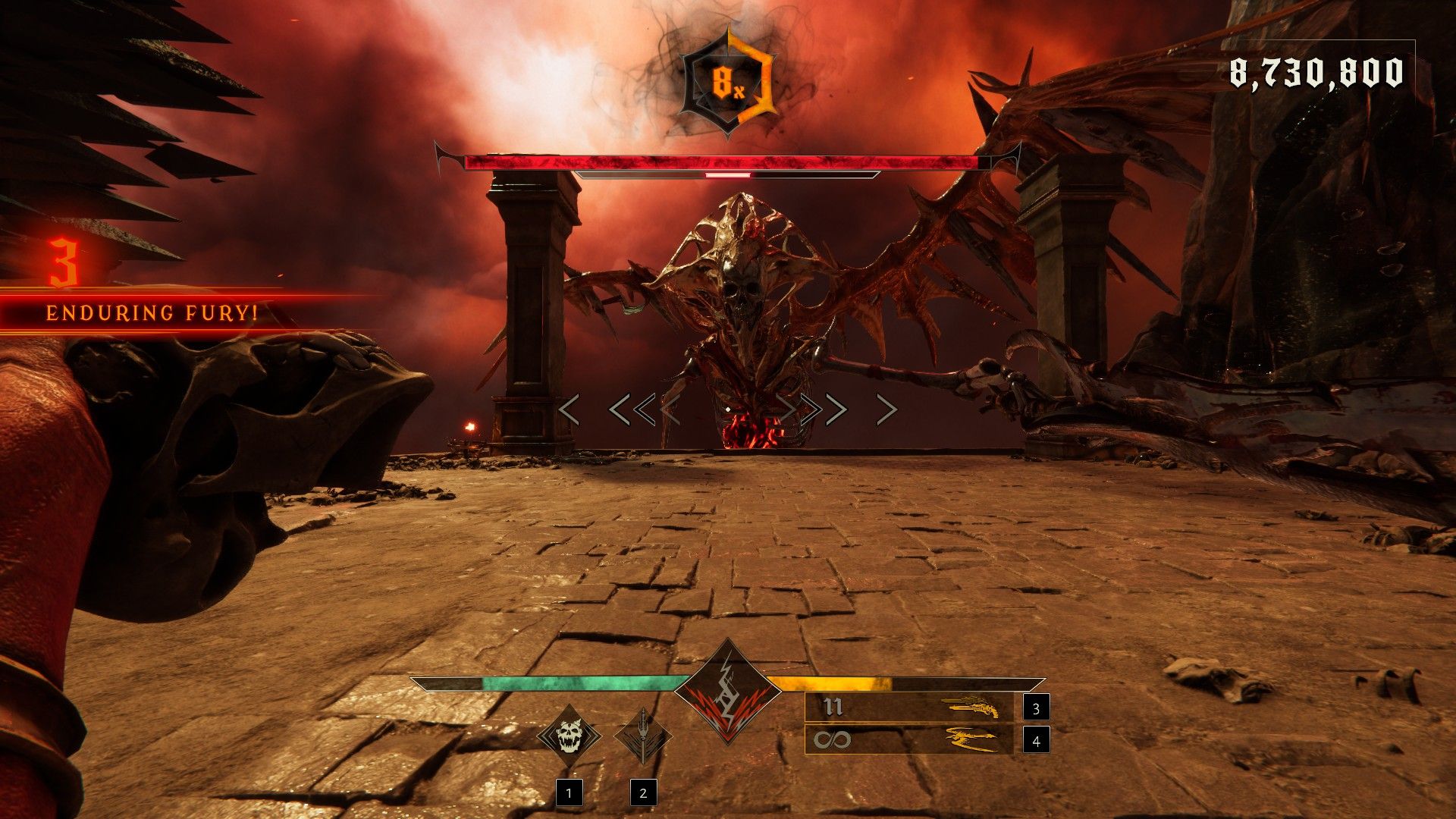 Prepare your jumps and dashes for the first battle because you’ll need them. To start with, projectiles can come in multiple directions from the air near The Red Judge, her mouth, in horizontal lines that will make you jump. Just check your jumpings and perform double ones with care, because you might fall into a line of fire.

Speaking of fire, The Red Judge will also throw some red projectiles from time to time, which will create expanding circles on the ground. Jumping and dashing while shooting her belly will be key in this phase.

This battle will have its own song, featuring Serj Tankian, different from the one in the level, so you’ll have to learn its times while fighting the boss. 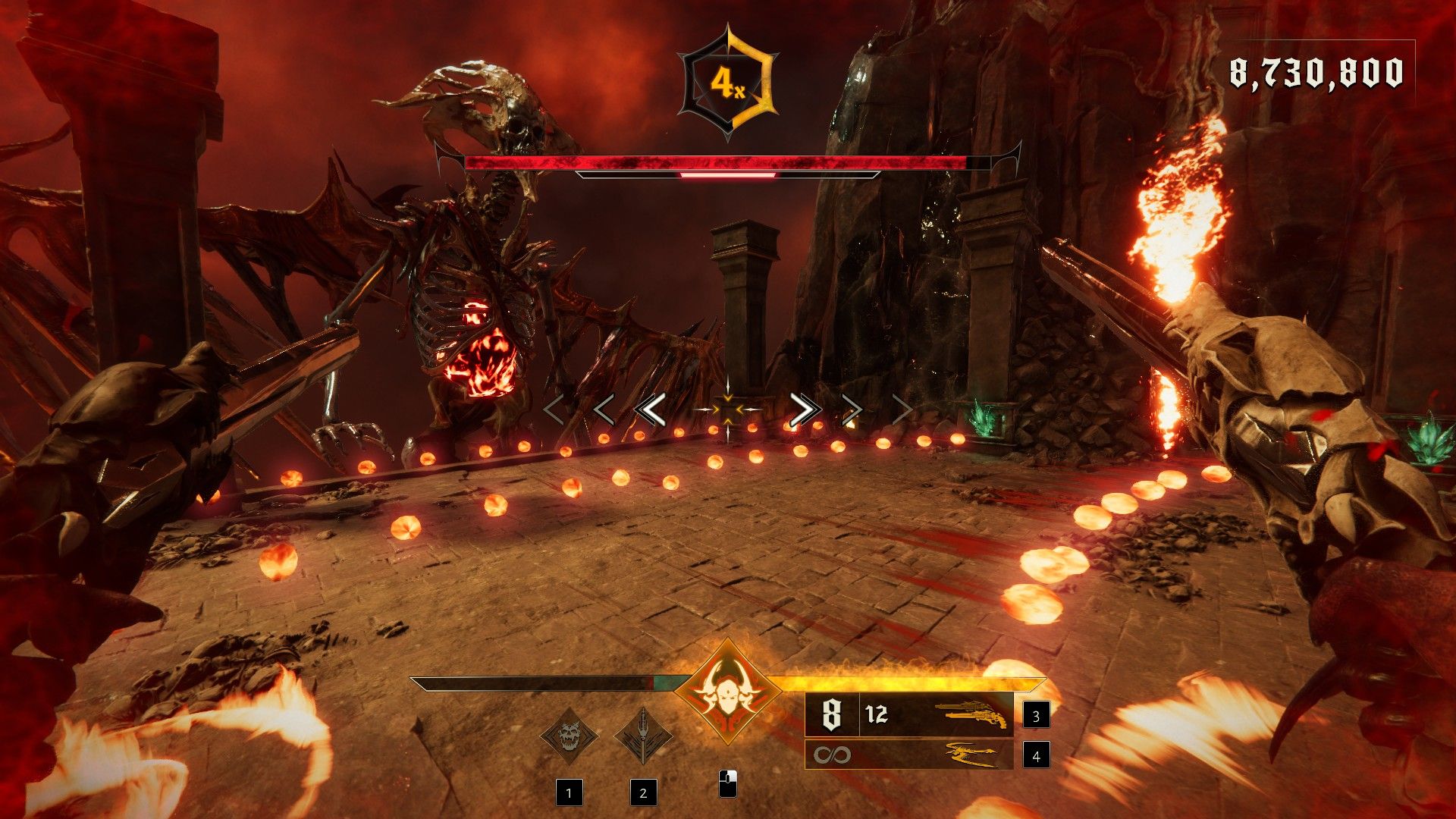 One last move that the boss can do at this point is a slam with one of her arms. Luckily this move is slow enough to see it coming from miles away. You can basically decide to be near her without much danger in this first phase, so you could pick any weapons you want before starting your journey in Yheol. However, the next phases won’t be so friendly with this, so you should at least bring one long-range weapon.

Paz will be back to you at the start of this hell. Use him to keep your Fury up. 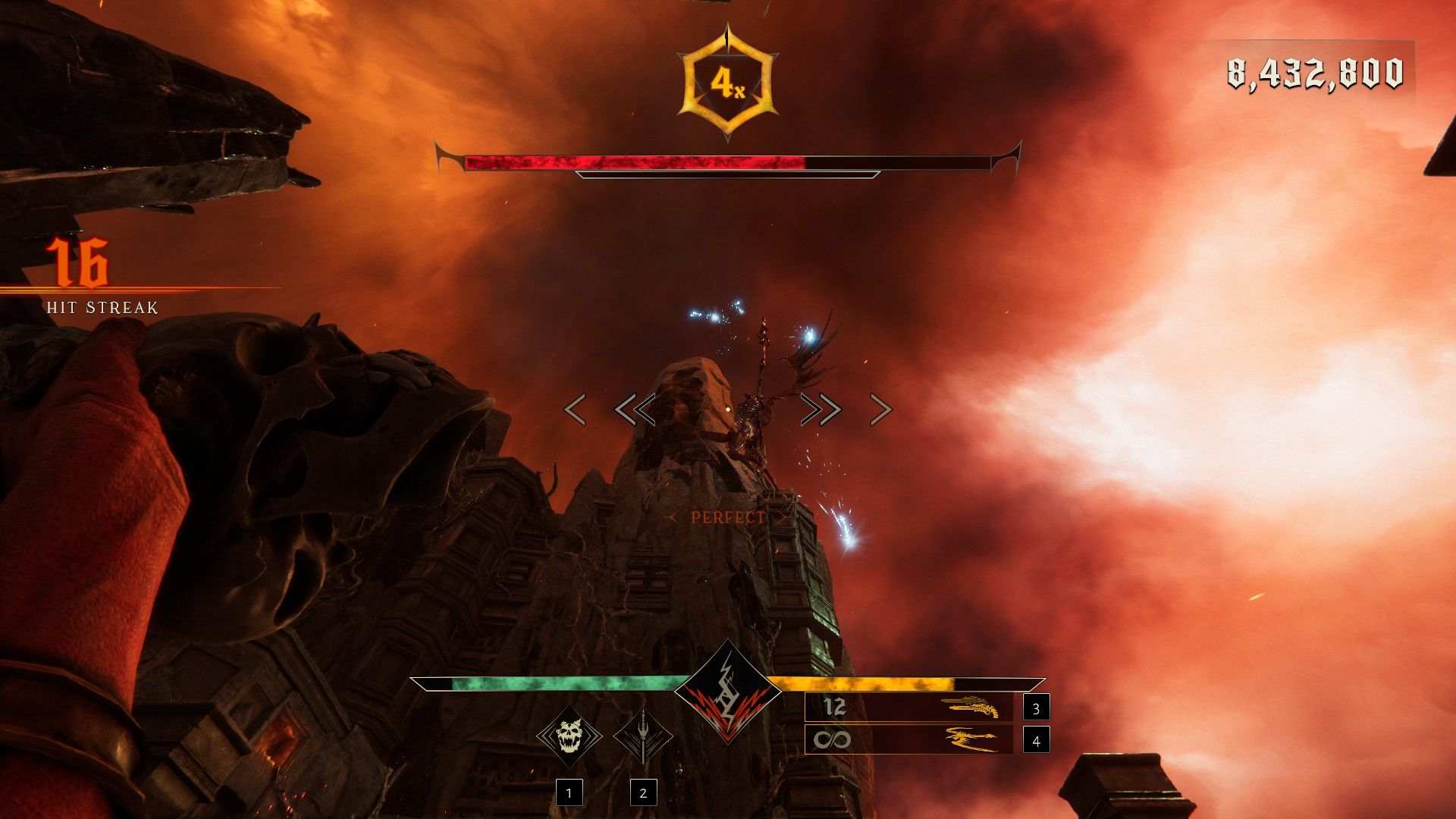 Beware of The Red Judge climbing the pillars on your left. At first, she won’t do anything, but after a moment, you’ll see electric projectiles coming from the sky. This is your sign to move right away to the left platforms and start climbing them until you reach the top.

How To Defeat The Final Boss (Second Phase) 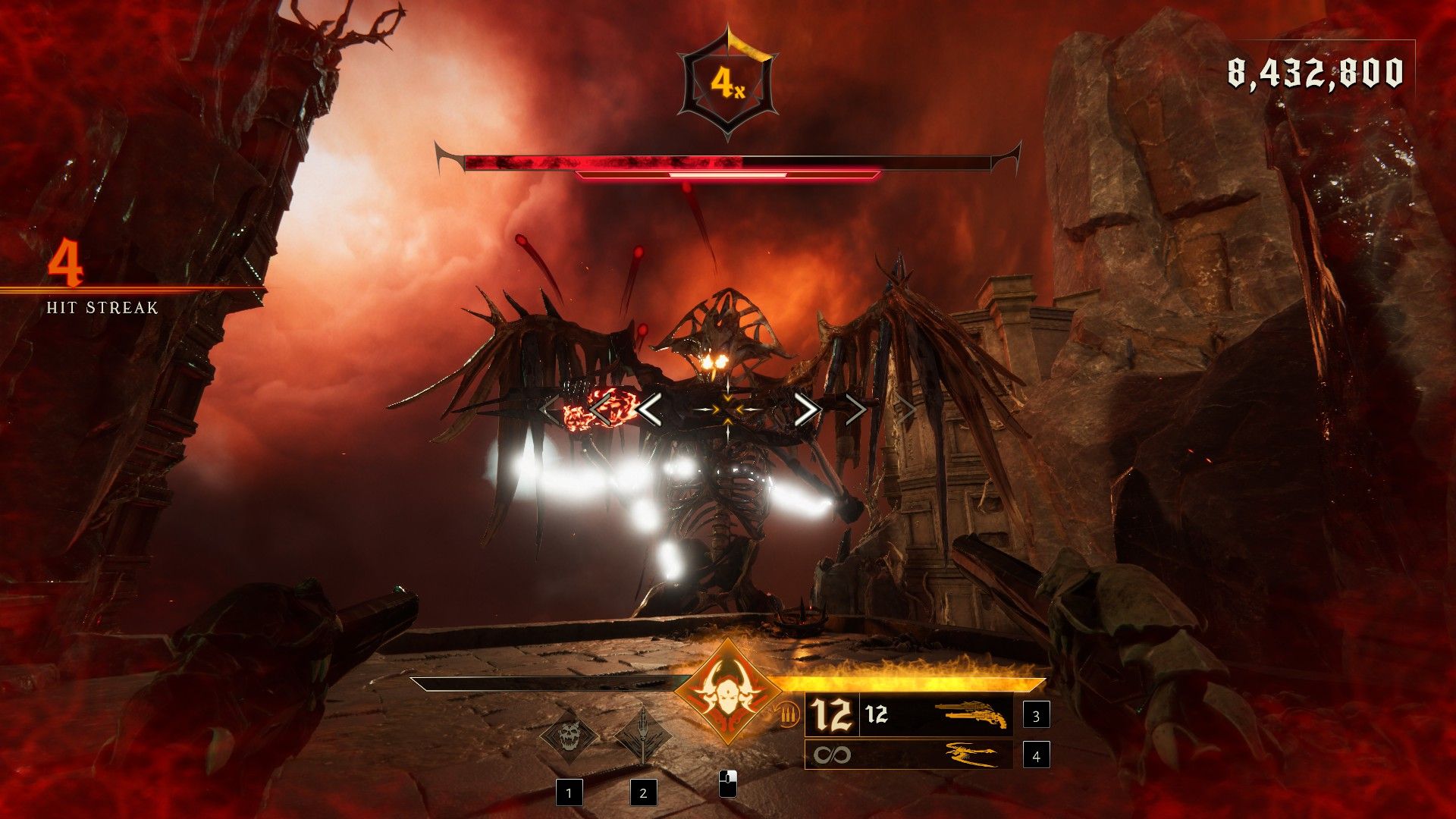 The attack that you should keep in mind the most here is when the boss is getting stunned. She’ll throw some of the red balls that create circles, like before, but here you have far less space to move. Double jumping where you’re standing while looking at the floor is a good move, checking what free space you have to dash there.

Another new attack is a slash she performs with the sword. This could be less complicated to avoid than the one above because The Red Judge will show you the sword for a few seconds after doing the slash. However, keep in mind that this could come from either side.

You have three green crystals in this area. One of them is on the lower level, on the left. 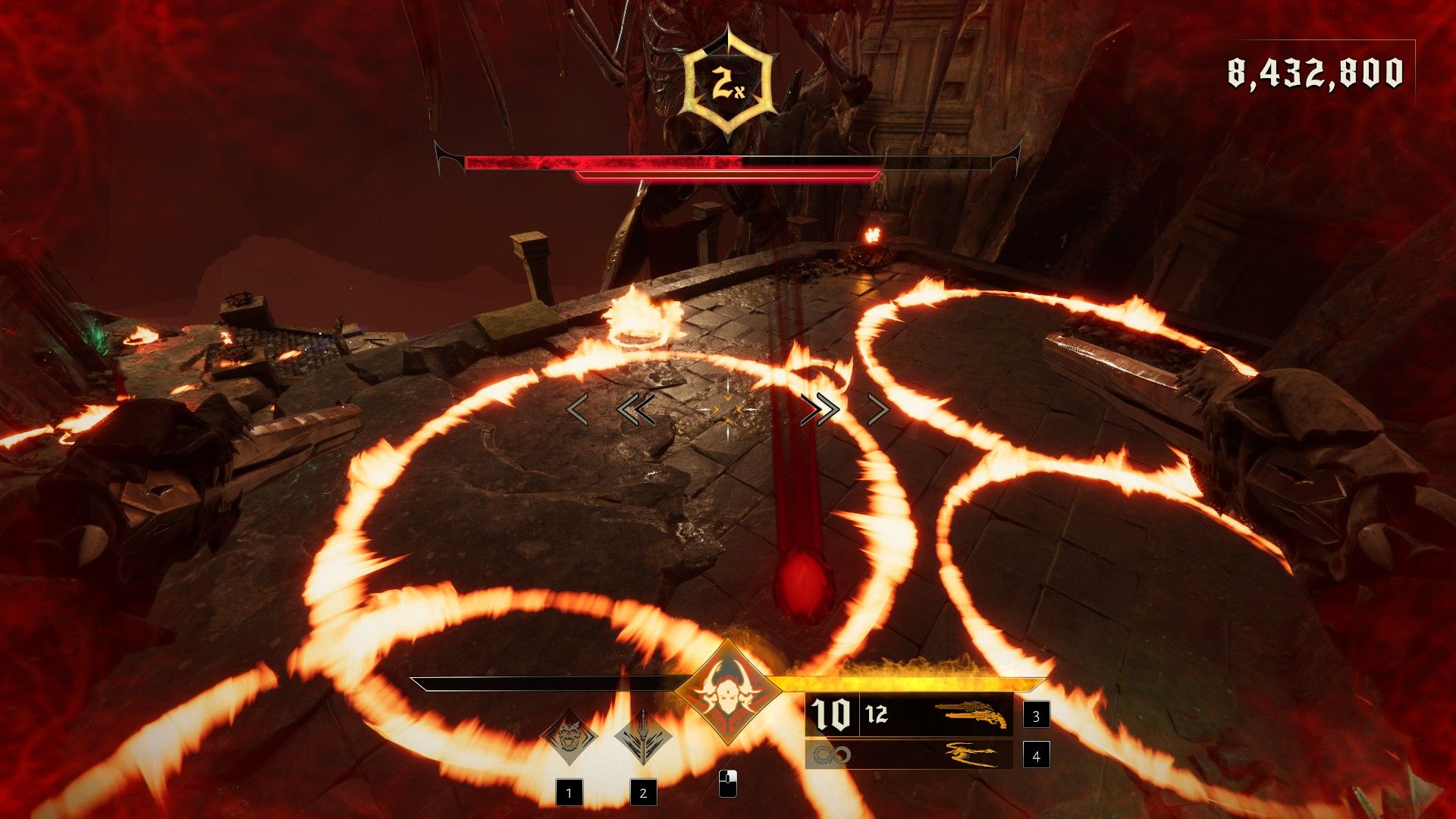 It’s irrelevant which weak points you decide you shoot first. They will explode when enough damage is done, but she won’t change her moveset until you destroy all of them. When you do that, you’ll move to the final phase.

How To Defeat The Final Boss (Third Phase) 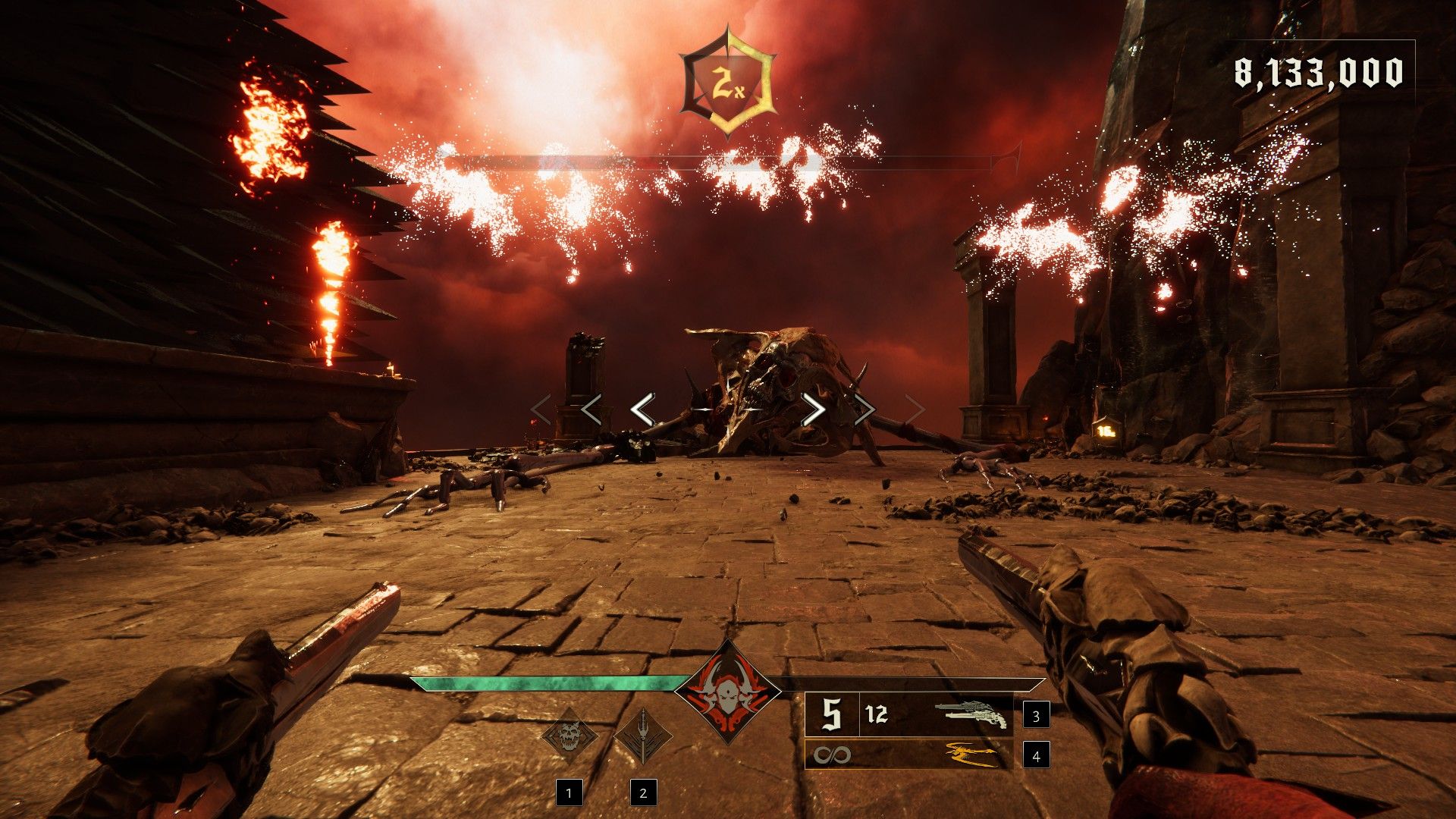 After falling to the lower ground, The Red Judge will remain inactive for a moment. However, she’ll summon three aspects like the one you’ve been facing throughout the game. You can hit any of them at all times, so just choose your preferred target based on distance.

Look out for the projectiles that they will throw — you’ll know the ways, there’s nothing new here. 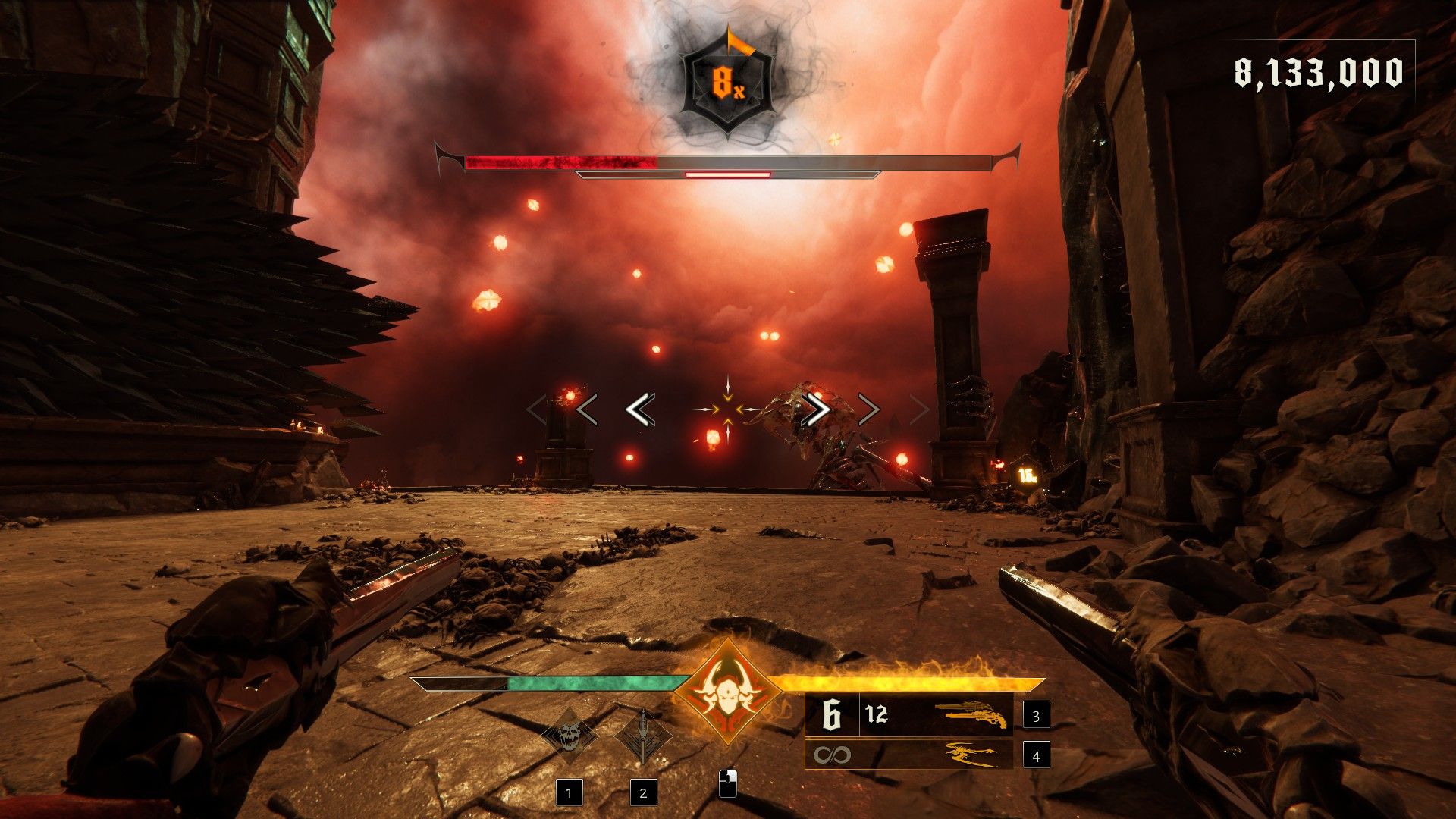 Once the aspects are done, you’ll have to focus on the eyes while avoiding her projectiles. In fact, you can avoid most of them by just coming close to The Red Judge, in the center of the arena, and then dashing to one of the sides when you see a quick flow of balls. Also, jump for the horizontal lines while checking that nothing else is coming your way. 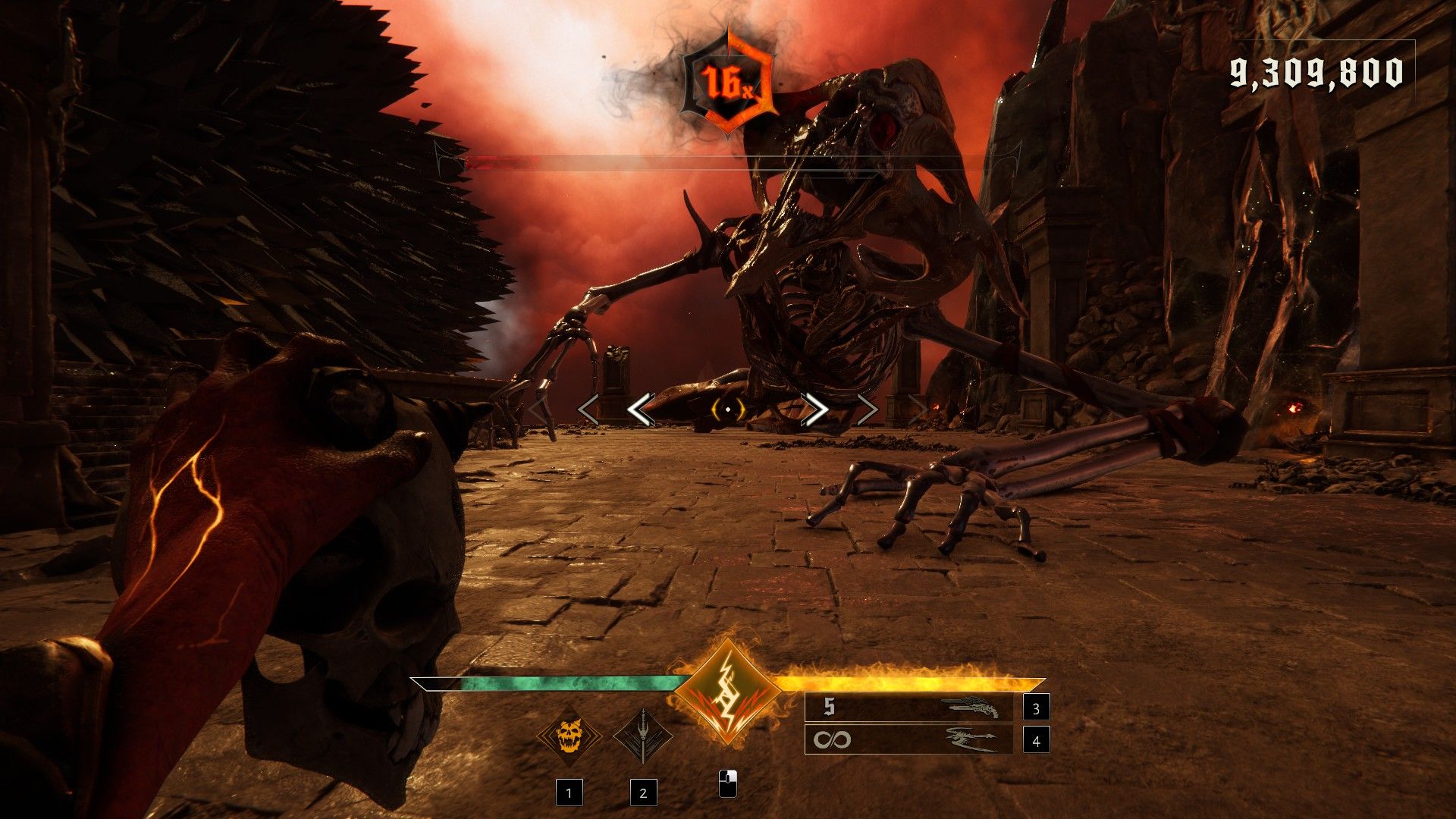 For the final round, be calm. The most complicated thing here will be hitting the eye left. Her wave of projectiles from the sky is like everything you have seen so far, and they won’t be flying directly toward you. 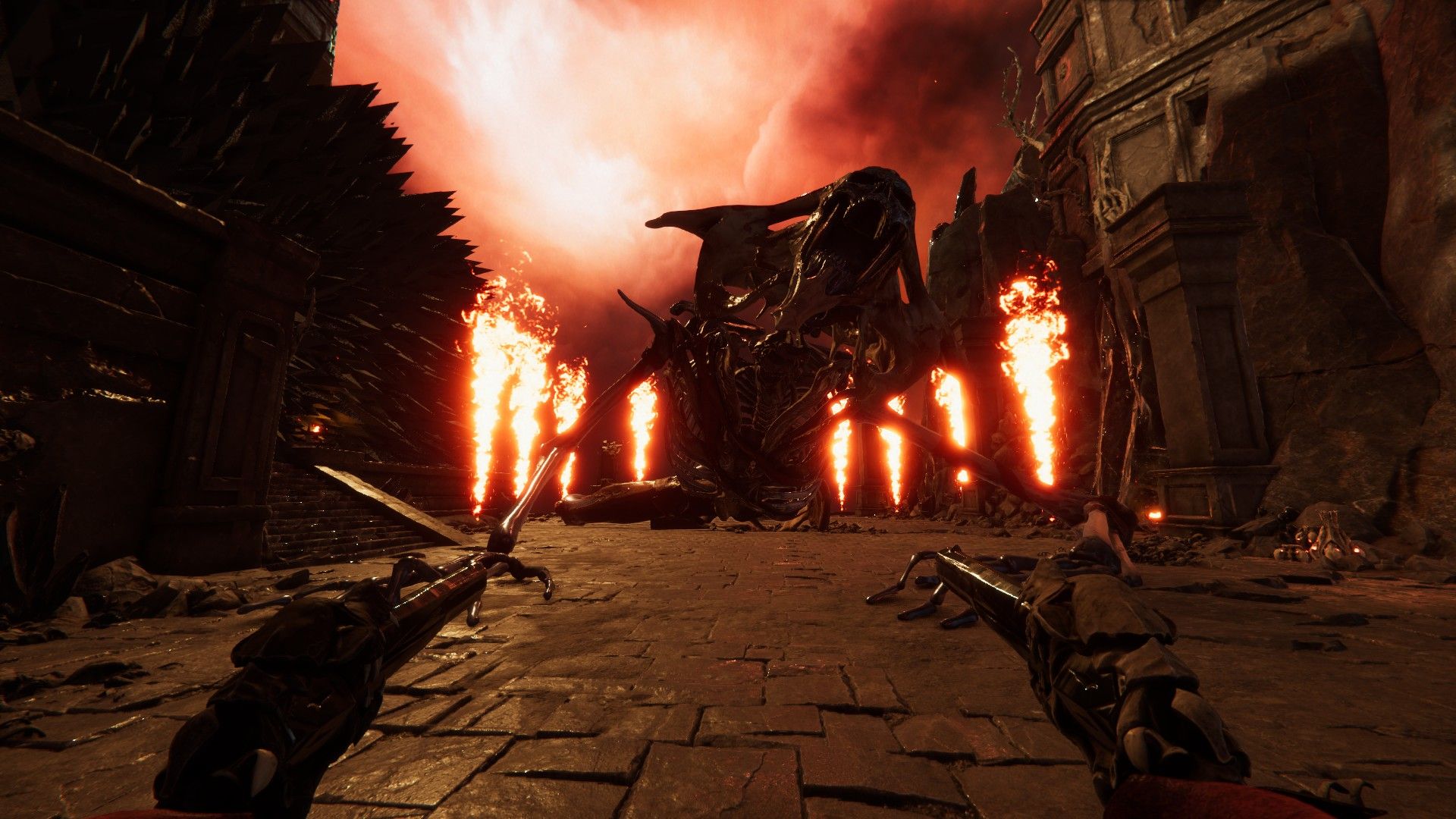 When you defeat the Red Judge, the game will be over. You will see the last cutscenes and get to the credits. This hell doesn’t have Torments and there aren’t secret levels to unlock.